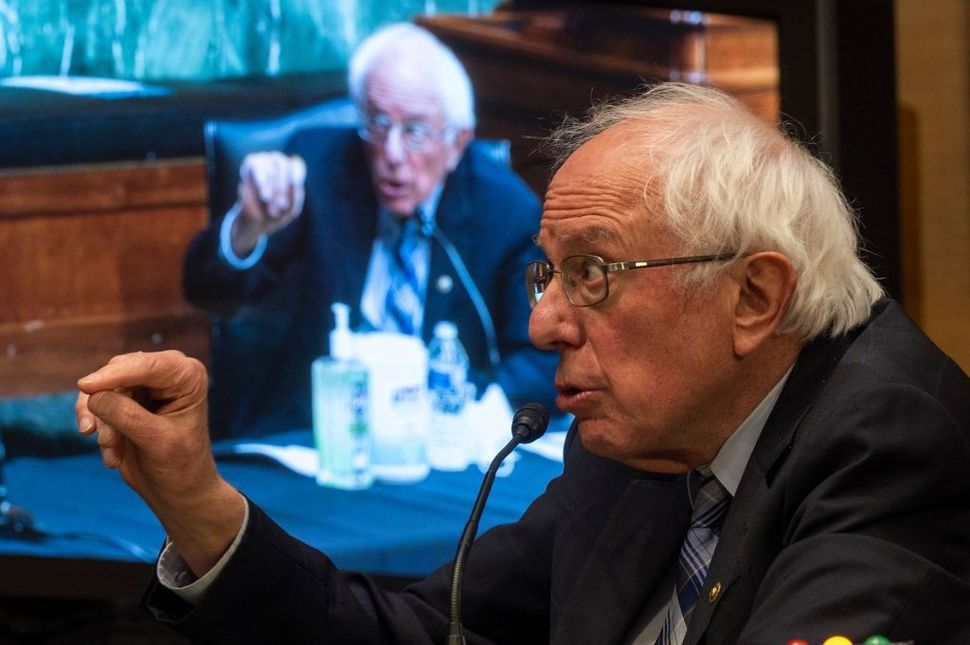 Bernie Sanders speaks at a hearing. Courtesy of Getty Images

Are Jews just inherently rude? The stereotype — whether employed in “The Marvelous Mrs. Maisel” or applied to Bernie Sanders — is that Jews speak over each other, shout and interrupt. Sanders even got in trouble for it, people complaining that he shouted too much during his campaign, while Jews on Twitter leaped to his defense.

The topic dominated Twitter again recently when freelance journalist Erin Biba posted a TikTok video to Twitter. In the video, a user named Sari, who goes by the handle @gaydhdgoddess on TikTok, explained a linguistic pattern called “cooperative overlapping.” This, she explained, happens when speakers interrupt one another as a way to convey engagement.

The comments on the TikTok were largely positive (though not exclusively — it’s still the internet). Viewers felt seen by the explanation, Jews and non-Jews alike; this conversational pattern is common in many cultures, including Italian and Indian families. Others explained that their ADHD led them to speak similarly, because it was difficult for them to curb their excitement about a topic. Even non-interrupters thanked Sari for helping them understand their friends.

Twitter users weren’t as nice; Biba has now deleted her tweet because many of the comments got nasty, angrily accusing cooperative overlappers of being rude, arguing that interrupting is interrupting, regardless of the academic jargon used to describe it.

Gotta love Twitter. People have managed to find a million different ways to be offended by a super cute video about linguistics.

This is by far the worst website on the entire internet.

It’s bullying to talk over someone. It’s a dominance signal. Arguing that this is innocent fun is so disingenuous.

And people went further than simply saying the tactic is rude. Twitter is known for its storms and rages over issues, so the discourse over a mildly controversial topic escalated wildly. Soon users were accusing any acceptance of cooperative overlapping of racism or ableism, and denying that the speech pattern has any cultural validity, even using antisemitic slurs.

Hard pass on watching—racism. It’s like telling a racist’s behavior is acceptable because of language and culture.

I can’t help but find this video incredibly ableist.

For me it’s not about thinking the other person is rude. If you interrupt me after “getting the gist” I WILL lose train of thought, which is a horrible feeling, so I will simply stop trying to participate #ADHD

So is interrupting inherently rude, a sign of dominance or disrespect?

Deborah Tannen, a professor of linguistics at Georgetown University, who coined the term “cooperative overlapping,” says it’s all relative. “The very notion of politeness, it’s a cultural one,” she said. “Politeness means showing consideration to the other person, and showing you’re a good person. So if you’re showing interest in the other person, then that is a kind of politeness.”

All of our communication habits are conditioned, according to Tannen, though they are also impacted by personality and other individual factors, as well as context; conversations at work between a boss and employee, for example, might operate differently. Tannen has extensively researched conversation patterns across cultures, as well as gendered conversational habits, and published both popular and academic books on the topic, such as the 1986 “That’s Not What I Meant!” and 1994 “Gender and Discourse.”

Tannen says the issue is that we judge the person we’re speaking with not only through their words but also through their mannerisms and style of speech, which we unconsciously read through our own cultural assumptions, which may differ. “We don’t think in terms of conversational style. We think in terms of personality, intentions, ability,” she said. “It’s one of the most fundamental tragedies of human relations.”

Even within Jewish groups, cooperative overlapping isn’t universal; Tannen said conversational overlapping isn’t really a Jewish or New York trait; it is common throughout Eastern Europe, as well as the Levant. But it’s uncommon in Southern Jews, who tend to have come to the U.S. earlier, in the late 1800s, from Germany. She said Southern Jews have similar prejudices against New York-area Jews.

Tannen guessed that antisemitism preceded the stereotype about Jews as loud or too talkative, however. “Jews, in particular in this country, because people have negative impressions of them, they’re going to see ways of speaking as reflective of that, and say, ‘Oh, it’s not that I have anything against Jews, it’s just that they’re all so pushy,’” she said.

On Twitter, as the discourse swelled, this phenomenon played out in the comments. People raged against Jews for using a linguistic term as an “excuse” for being rude.

Others tried to point out the difference between conversational overlapping and interrupting. One adds to the thought, and the other takes away; the original TikTok creator even added an illustrative video, interrupting herself with phrases such as, “same omg,” and rephrasing the topic at hand to show her engagement.

Unfortunately, once the Twitter mob is unleashed, it’s hard to rein it in. The slower speakers, who Tannen would term “high considerateness” speakers, continued to feel affronted by the idea of interruption, insisting that it is an inherently abusive speech pattern.

But how do you find a middle ground between “high involvement” and “high considerateness”?

Tannan says she is asked this question often. Unfortunately, there’s no magic spell. The key is realizing what communication patterns people are working with, and trying to adapt; it may require a bit of miscommunication as everyone finds their feet in the conversation.

“If you’re not happy with how things are going, you can try doing something different,” Tannen said. “Otherwise, the impulse is to do more of the same. I have so many examples of people who tell me just realizing that they need to wait longer before deciding to speak, they’re amazed that the other person starts to speak.” Other times, it goes the other way, and a slower talker has shortened their pauses only to find they can suddenly enter the conversation easily. Before trying these tactical changes, both sides had been offended, one by the lack of engagement and the other by the apparent selfishness, but by adapting their patterns, they found a comfortable rhythm.

So is interrupting rude? Well, it depends who you ask; sometimes, it’s the very height of good manners. The key lies in not forcing your own assumptions on anyone else, and both sides doing their best to adapt and understand each other. Unfortunately, Twitter does not excel at this kind of nuance.