The Passover Parade: A look back at a century of unleavened fashion The nerd-of-a-rabbi in me has found a pandemic pastime that beats doom scrolling: poring through digitized old Jewish periodicals. Among my discoveries: Passover has a fashionable history.

For about a century starting in the 1850s, dressing up for the spring holiday was de rigueur for American Jews. “Buy your Pesadik clothing at Bailey’s,” urged a Yiddish advertisement I found in a 1913 edition of The Jewish Daily Press, a Cleveland newspaper. Pesadik, or “fit for Passover” — a Yiddishism usually used to refer to food without chametz, or leaven, and thus kosher for Passover — was widely applied to dresses and suits in both advertisements and articles. 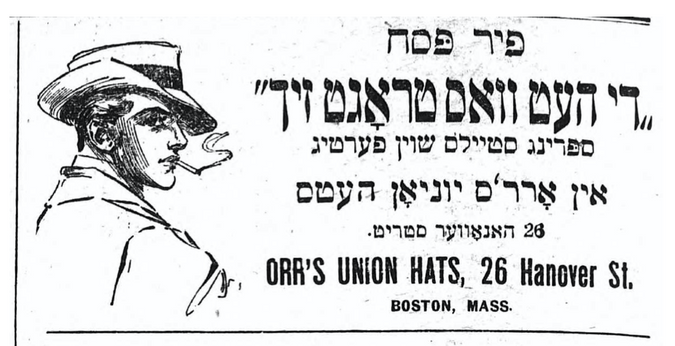 “For Passover, the hat that wears itself,” reads a 1909 ad from the Baltimore Jewish American. Courtesy of NLI Historical Jewish Press

Flash forward to 1952, when The Sentinel, a Jewish newspaper in Chicago, featured photos of Passover influencers, including a Mrs. Louis L. Perlman, who it said “ plans her wardrobe as carefully as she plans her Seder table.”

During this pandemic year, in which the only outfit I have splurged on was a tie-dye sweatsuit, I enjoyed reading about all this stylish attire. Still, I wondered why there would be such an emphasis on purchasing a new wardrobe for Passover, a holiday that recalls the Jewish people’s freedom from slavery in Egypt more than 3,000 years ago. Nowadays, Passover is the most celebrated holiday on the Jewish calendar, with 70% of American Jews attending a Seder, but most of that observance happens at home (or on Zoom!) so why dress up?

It turns out that synagogue was once more central to the Passover experience. In the mid-1800s, many of the 250,000 Jews then in America headed to services in their holiday best, according to an 1860 edition of The Occident, the first Jewish newspaper in America. 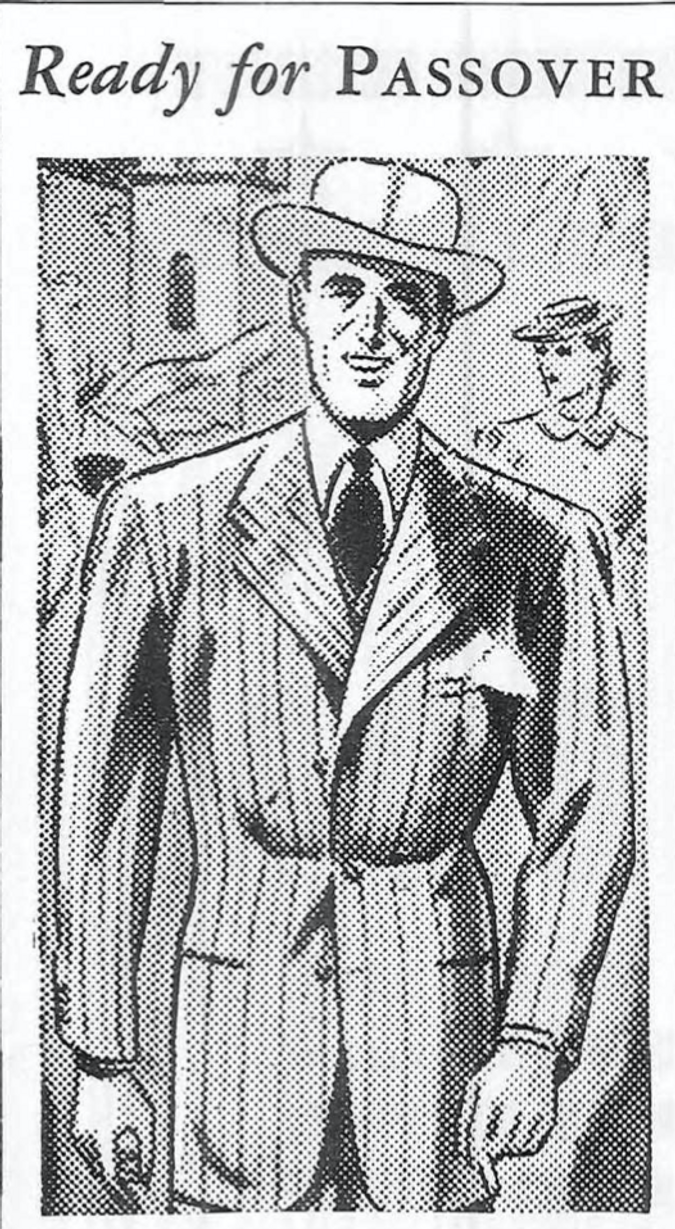 But the idea of fashionable Passover garb was not embraced by all. The Occident, which was published in Philadelphia, lamented that “so many come ostentatiously once in a long while to synagogue” for the holiday, accusing them of being “mere visitors for fashion’s sake.”

I wondered if The Occident, which ceased publication in 1869, was not only bemoaning low attendance in synagogue for the rest of the year, but also expressing dissatisfaction with what they saw as succumbing to assimilation. It was around this time that fashion became an essential part of the church-going experience for their Christian counterparts, particularly for Easter, Passover’s seasonal cousin.

In the 1860s, churches across America began to display more elaborate floral arrangements at Easter time, both inside the sanctuary and out, according to an article by Leigh Eric Schmidt, a professor at Washington University of St. Louis. This decorative spirit soon spilled over into spring fashion, Schmidt wrote, with the iconic Easter hat leading the way. By the 1880s, the well-dressed churchgoers leaving Easter services on Manhattan’s Fifth Avenue became the Easter Parade, which Schmidt called “the great fashion show of the year.”

Not to be outdone, a 1936 ad for men’s suits in The American Jewish World, a Minnesota newspaper, exclaimed, “I’ll Be the Proudest Fellow in the Passover Parade!” Thirty years earlier, in 1906, the Hebrew Standard of New York had provided a detailed report of a Passover parade in Manhattan. 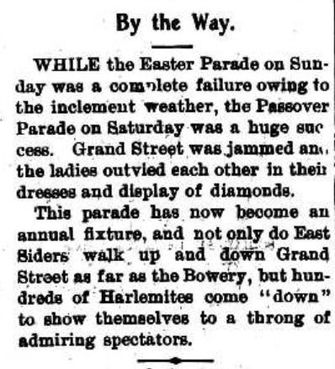 “While the Easter Parade on Sunday was a complete failure, owing to the inclement weather, the Passover Parade on Saturday was a huge success,” the article said. “Grand Street was jammed and the ladies outvied each other in their dresses and display of diamonds. This parade has now become an annual fixture, and not only do East Siders walk up and down Grand Street as far as the Bowery, but hundreds of Harlemites come ‘down’ to show themselves to a throng of admiring spectators.” 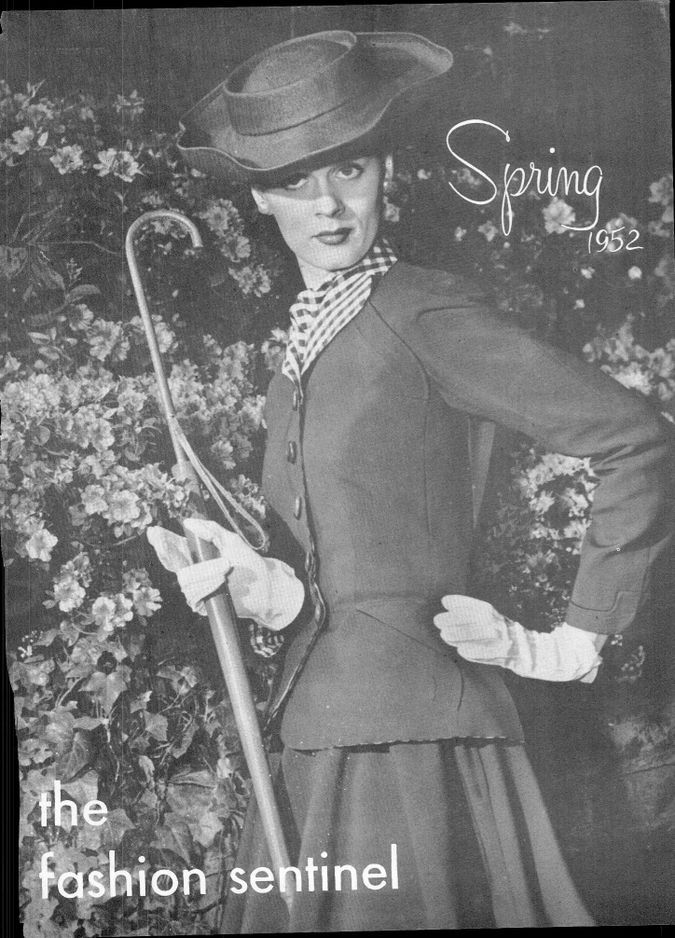 In 1952, The Sentinel published a special section on Passover fashion. Courtesy of NLI Historical Jewish Press

In that same 1952 edition of Chicago’s The Sentinel that highlighted Mrs. Perlman, there was an entire entire section dedicated to “the Passover Fashion Parade.” Jenna Weissman Joselit, a historian at George Washington University, suggested in an email interview that this referred not to a specific event “but to a jamboree of opportunities to buy and display new clothes — around the Seder table, in the synagogue and on the street.”

Indeed, The Sentinel explains that throughout Passover, “Impromptu parties are the rule, with uninvited guests dropping in to extend greetings of the season,” adding that “the smart hostess is always dressed to welcome her friends.” 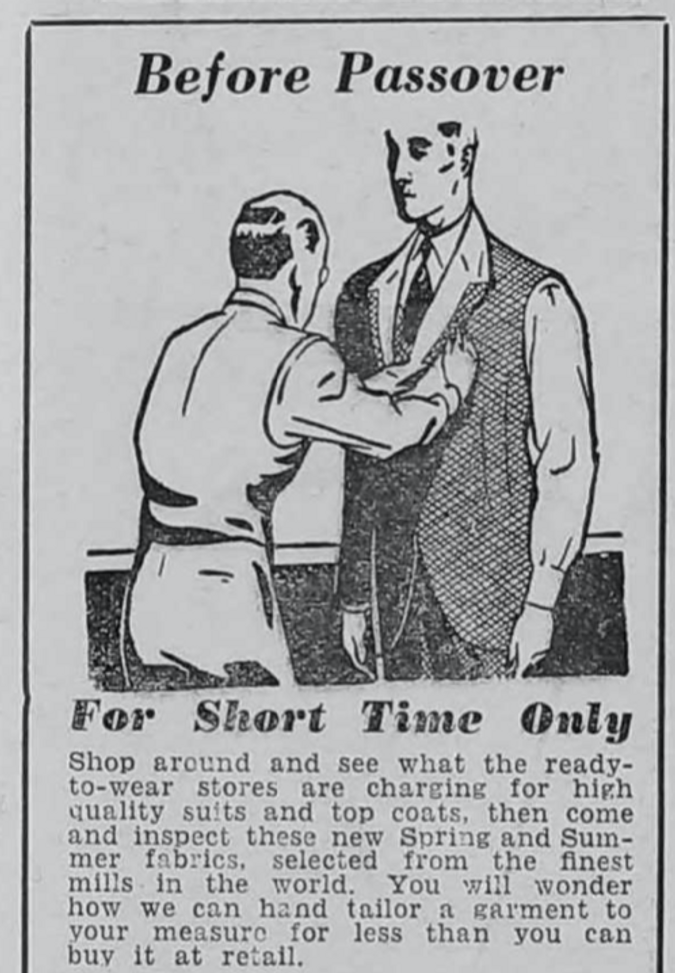 Passover styles also carried aspirational value for men seeking to show they had made it in America – especially those who were among the 2 million Jews who immigrated to the United States between the 1880s and 1924. Focusing on the image of a successful businessman, a 1939 ad in The Sentinel features a broad-shouldered man smiling in a fancy suit, with the tagline, “Ready for Passover.” The holiday became not only about the exodus from Egypt but the freedom to practice Judaism in America as people wished.

In Beyond the Synagogue: Jewish Nostalgia as Religious Practice, a book published in January, Rachel Gross, a Jewish Studies professor at San Francisco State University, makes the case that American Jews have long participated in a broad array of ostensibly nonreligious activities that should be “properly understood as religious.” Under this new umbrella, Gross includes eating in delicatessens and touring Jewish historic sites — I’d venture to add dressing up for Passover. 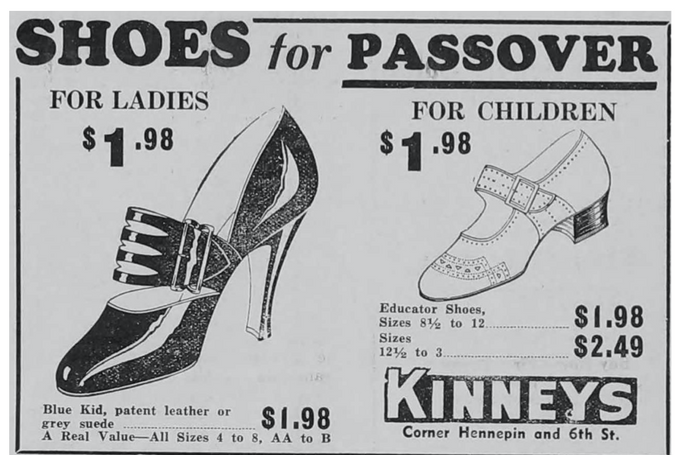 Just as Passover allows us to celebrate our freedom from slavery in Egypt, so can fashion elevate us from the drudgery of our everyday lives. The Seder was originally based on the Greco-Roman symposium, a fancy banquet where individuals reclined on a triclinium — the ancient equivalent of a couch. We’ve probably all spent more time reclining during this pandemic year. Perhaps the upcoming Passover holiday will provide an excuse to do something more active — that is, step up our wardrobes and liberate ourselves from leggings. As we recite at the Seder, “This year we are enslaved; next year we will be free.”

Rabbi Yael Buechler is the Lower School Rabbi at The Leffell School in Westchester and founder of MidrashManicures.com.

The Passover Parade: A look back at a century of unleavened fashion