Between a shtetl-born painter and a Dutch expressionist, remarkable parallels 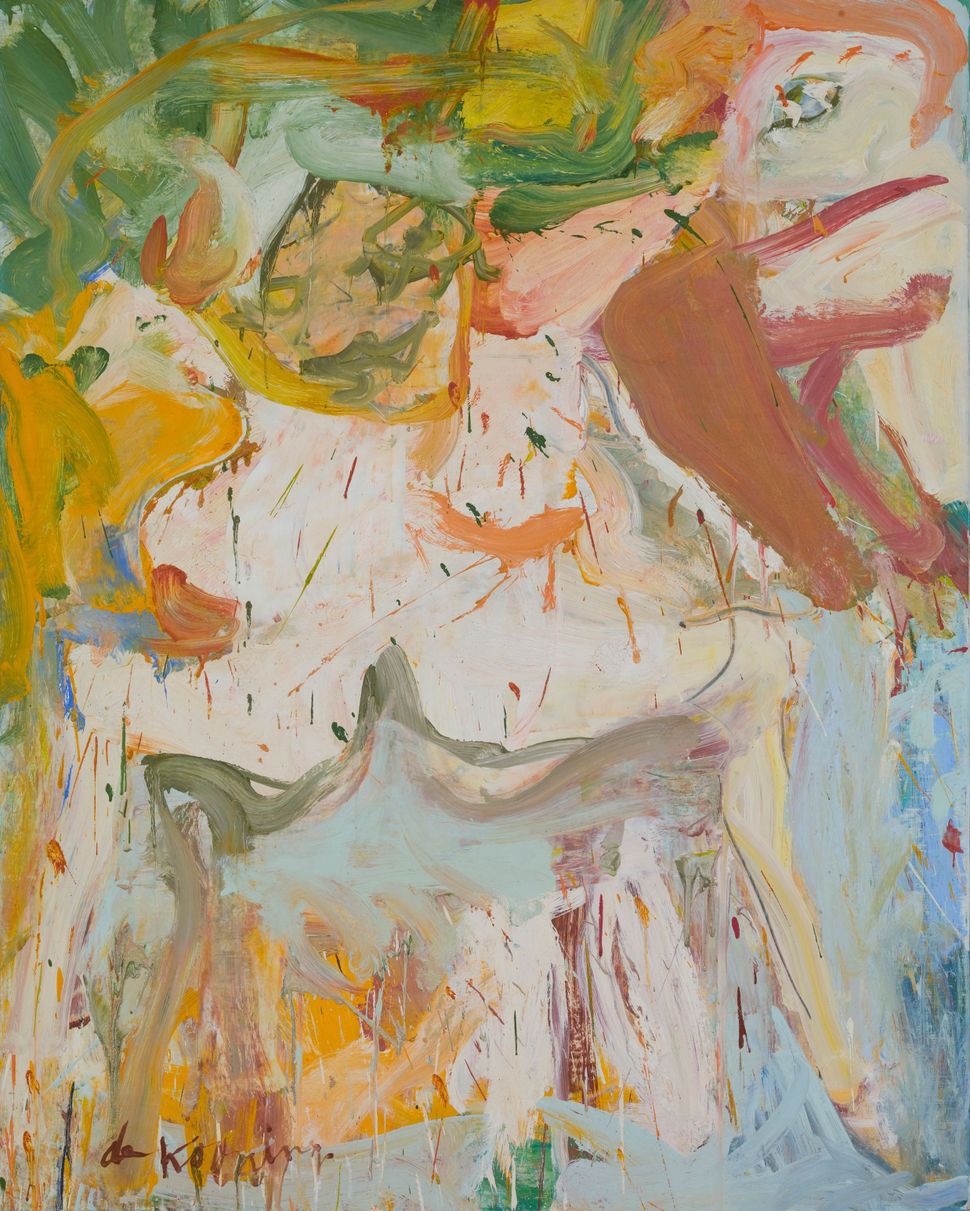 “I’ve always been crazy about Soutine — all of his paintings,” the Dutch-born artist once said.

Now visitors to the Barnes Foundation in Philadelphia can see how the shtetl-born Jewish artist inspired de Kooning in “Soutine / de Kooning: Conversations in Paint.” The exhibit, which features 45 paintings by the artists, highlights more than de Kooning’s affinity for Soutine. It celebrates a cross-cultural connection between Europe and the United States, said Simonetta Fraquelli, consultant curator for the Barnes Foundation and the exhibit’s co-curator.

“It is serendipitous that the show is coming just as America is repositioning itself vis-à-vis Europe and the rest of the world. It shows how art doesn’t live in a vacuum, how it can be a reaction to something or an answer to something,” Fraquelli said in a Zoom interview from her apartment in Italy.

The second youngest of 11 children and the son of a tailor, Soutine was born in what is now Belarus. Considered an outlier among artists, the expressionist painter was active from the mid-1920s through his death in 1943.

De Kooning, was born in Rotterdam in 1904. At age 16 he left high school and took a job as an apprentice in a commercial artist firm. His painted in a style that came to be known as abstract expressionism, executing his last work in 1991.

To create an illusion of a feeling of dialogue, Fraquelli directed the team at the Barnes to hang the artists’ works on opposite or adjacent walls, but never side-by-side.

“While 11 years separated the two artists, and while they never met, their paintings seem to speak to each other across time,” Fraquelli said.

Rendered in luminous blues and greens, juicy oranges and muted olives, Soutine’s 1921 “View of the Village” gives viewers a sense of peering through branches at a distant village. Across the room, the broad brushstrokes and eye-popping colors of de Kooning’s “Composition, 1955.” evoke a similar feeling. 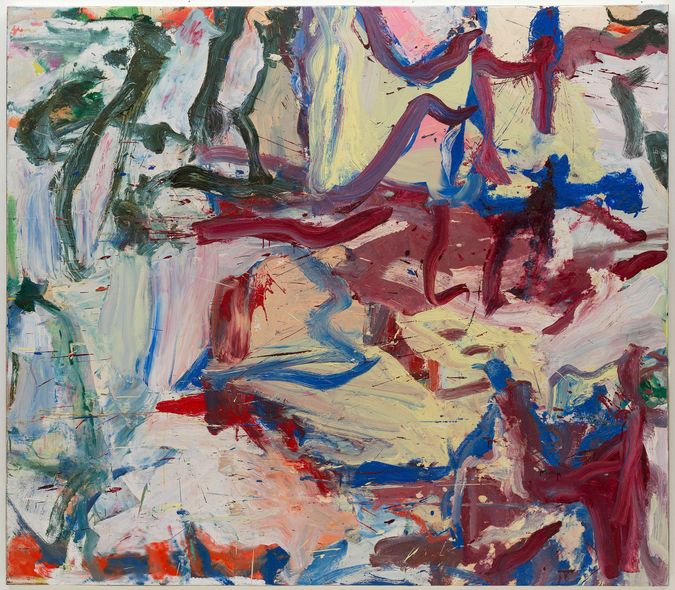 Although Soutine’s parents supported their son’s artistic endeavors, those in the shtetl were less enamored; especially the rabbi’s sons. They were so enraged after Soutine painted their father they beat him severely, according to several biographies about the artist.

Soon after the incident, Soutine left for Minsk with little more than his parents’ blessing and 25 rubles he got from a settlement from the rabbi’s family. Soutine planned to apprentice with a tailor and follow in the footsteps of his father. Instead he decamped for Vilnus and enrolled in art school. He left for France in 1913 upon completing school.

For the next decade Soutine lived the life of a starving artist in the Montparnasse section of Paris where he spent time with other Jewish émigré painters including Amedeo Modigliani. He also spent hours at the Louvre Museum before the works of Rembrandt, Goya, Chardin and Courbet.

It wasn’t until 1922 that Soutine’s fortune changed.

Dr. Albert C. Barnes, the Philadelphia-based collector and founder of the Barnes Foundation, was back in Europe and on the hunt for contemporary paintings. One afternoon Barnes happened upon a gallery, and his eyes were drawn to a painting of a pastry chef. Taken in by the chef’s slightly rumpled appearance and bright red scarf, Barnes asked to meet the artist. After meeting Soutine, Barnes purchased 50 of his works. 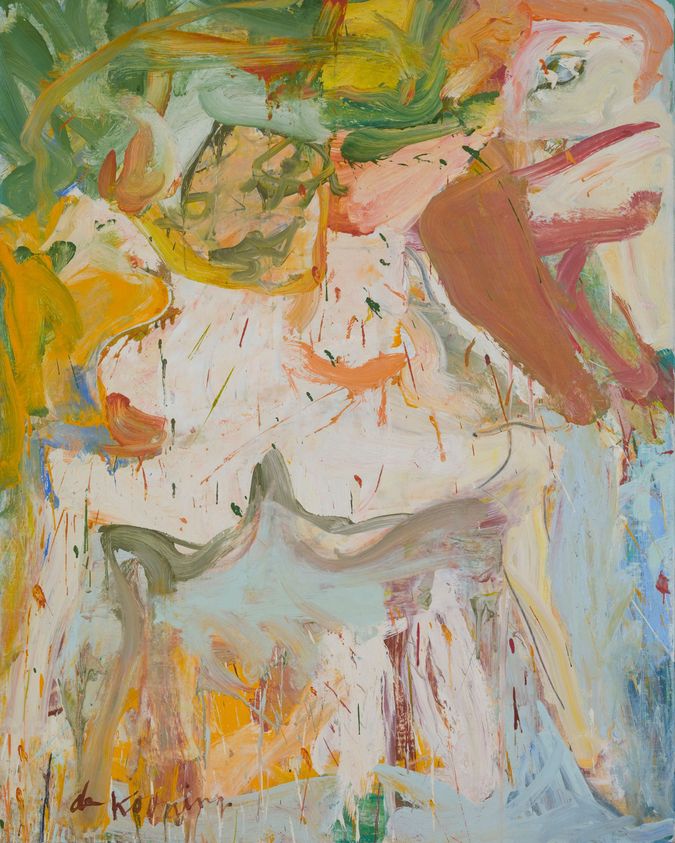 “Barnes helped bring about a spectacular rise in Soutine’s career. He wouldn’t have become the artist he was without Barnes, who ensured his reputation in the USA,” said Nancy Ireson, the Barnes’ Deputy Director for Collections and Exhibitions.

With Barnes’ patronage, Soutine was now positioned to influence a whole new generation of artists, including Willem de Kooning. Barnes brought the paintings back to Philadelphia where he put them on display at his foundation. Although Soutine rarely exhibited his work, in 1937 he participated in an exhibit at the Galerie Nationale du Jeu de Paume.

De Kooning moved to New York City from Rotterdam in 1926. In 1943, he would marry Elaine Fried, an accomplished artist in her own right. While de Kooning didn’t struggle as much as Soutine at the start of his career, it took a 1948 solo exhibition at the Charles Egan Gallery in New York to launch his career.

Although the two men had vastly different upbringings and lived in different cities, they had a shared sensibility when it came to painting, Fraquelli said. Both men used saturated colors and laid the paint on so thick that the lines from the paintbrush bristles are visible. And both men tested the limits of expressionist, cubist and abstract styles of painting.

“The way they both could manipulate the paint to create an emotional response in the viewer is remarkable. They also both had a fascination with the grotesque and the visceral,” Fraquelli said.

Soutine was notorious amongst his neighbors for going to slaughterhouses and bringing home animal carcasses. Then for days Soutine’s assistants doused them with blood to keep them looking fresh while he painted.

Fraquelli said visitors to the exhibit can see a good example of similarities in shapes and styles in Soutine’s “Carcass of Beef,” which hangs in the same room as de Kooning’s “Amityville.”

Likewise Soutine’s 1918 self-portrait, which she placed opposite de Kooning’s “Woman,” also shows the interest in pain

Fraquelli described the protruding ears and lips in Soutine’s self-portrait and the bulging brown eyes and red lacquered nails in “Woman” as grotesque.”

Soutine went into hiding when the Nazis occupied France. He died in August 1943 at age 50 from a perforated stomach ulcer. That same year a New York gallery showed both his and de Kooning’s work in separate exhibits.

“In one room there were two long walls, one all Matisse and the other all Soutine – the larger paintings,” de Kooning told Quest Magazine in 1977. “With such bright and vivid colors, the Matisses had a light of their own, but the Soutines had a glow that came from within the paintings – it was another kind of light.”

Now 44 years later, Soutine and de Kooning are together at last, Ireson said.

“It’s the first time their works are being displayed together in this context and a truly remarkable visual dialogue ensues,” Ireson said.

“Soutine/de Kooning: Conversations in Paint” run through Aug. 8 at the Barnes Foundation in Philadelphia.

Between a shtetl-born painter and a Dutch expressionist, remarkable parallels