Returning to Poland, chasing ghosts and a lost painting 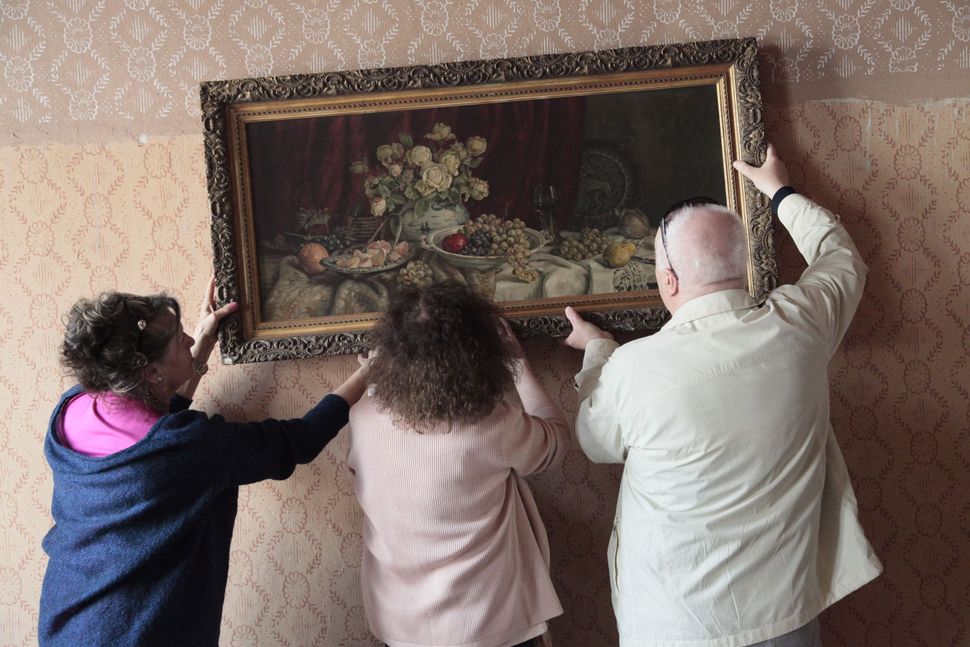 Still Life in Lodz: New & old owners of the still life painting hang it back in the very spot it hung for over 70 years. By LOGTV Films

“Still Life in Lodz,” a new documentary by Polish-Jewish director Slawomir Grunberg, centers on a Jewish woman’s return to her childhood home in Lodz, Poland, She, Lilka Elbaum, and her family were forced to flee no, not during the Holocaust, but in the wake of the 1967 Six Day War and a spike in Polish antisemitism. Jews were fired from their jobs, abused, and marginalized. 20,000-30,000 were exiled thanks to a campaign of government-sponsored harassment.

Now based in Boston she is haunted by visions of her childhood, most pointedly the image of a still life by a Russian artist that hung in her Lodz apartment. It’s the last thing she saw each night and the first thing she saw each morning during the 19 years she lived in that apartment, now empty and abandoned in a run-down, dilapidated building. It conveyed, at least in memory, “home, security, and the life we had,” she says. Part of her quest is to track down that painting which hung on that wall from the late 19th century through the 60s. Among its owners were two Jewish families (including Elbaum’s) and a Polish resident of German descent. The painting was a “silent witness to life and great tragedy,” Elbaum says.

Along with meeting the painting’s current owner, an affable Polish woman, one who is eager to be helpful, Elbaum meets and greets former neighbors, some of whom appear uncomfortable, and she makes a pilgrimage to an old Jewish cemetery. She seeks out the descendants of a Jewish family who helped her mother during the Nazi occupation. 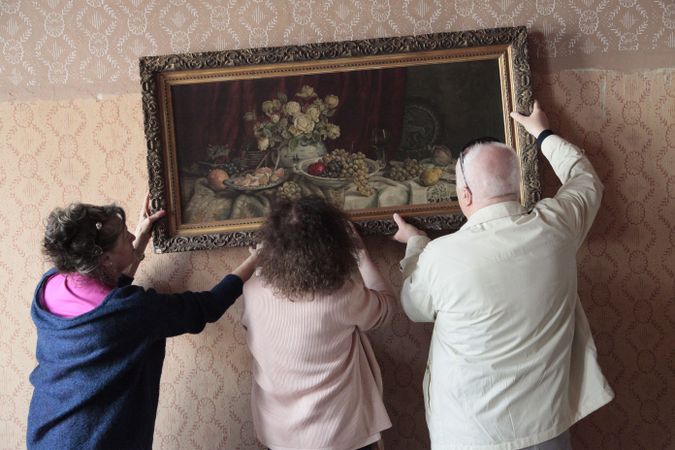 Still Life in Lodz: New & old owners of the still life painting hang it back in the very spot it hung for over 70 years. By LOGTV Films

On her journey, she is accompanied by two other Jews whose families were deeply connected to Lodz. There’s photographer Roni Ben Ari, an Israeli whose textile merchant father (and one assumes an early Zionist) fled to Israel in the 20s; and there’s Paul Celler of New York, the son of a Holocaust survivor who lived through the Lodz ghetto and Auschwitz. Each arrives with ghosts. Elbaum is obsessed with the painting while Ben Ari totes her grandfather’s menorah. The objects, the three visitors agree, confirm that a world that no longer exists was at one time a thriving universe.

Original animation, archival footage, stills and drawings paint a vivid historical montage of Jewish life in Lodz, the evolution of Polish antisemitism, and the long shadow it casts. In the pre-Holocaust years there were more than 300,000 Jews in Lodz. In the late 60s approximately 20,000 inhabited the city. Today a few hundred Jews remain.

Clips of marching Nazis invading the city, the giant Swastika flags, and Jews boarding trains for extermination camps continue to shock. As does a snippet featuring a communist bureaucrat screaming his head off about the Jews’ fundamental loyalty to Israel as opposed to Poland, insisting they get out, the sooner the better. An auditorium of supporters cheers and stomps. By contrast, scenes depicting a lively prewar marketplace are almost lyrical. 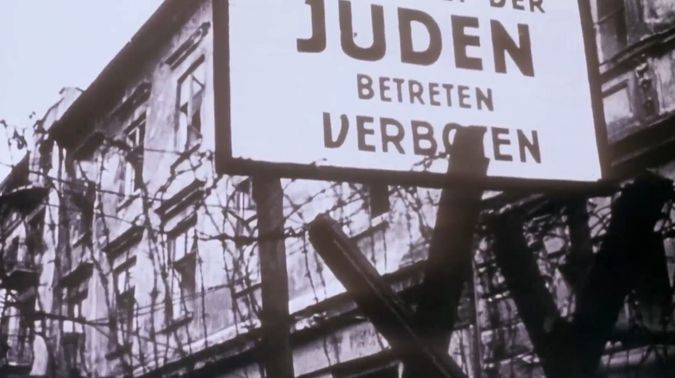 Bridge: An archival photo of the main bridge in the Lodz ghetto. By LOGTV Films

The documentary raises some provocative questions about the power of roots, special objects, the role of memory and how they inform each other. That said, the film feels unfocused. Only Elbaum actually lived in Lodz. For the others, especially for Ben Ari, the connection seems a tad removed. No one could have a deeper, more complex response to Lodz than Celler whose mother, a Lodz native, was a Holocaust survivor. Yet the narrative is focused on Elbaum.

There is no parity between the Holocaust and anything else. The wartime footage testifies to that. Yet the narrative tries to give equal weight to all three stories. Zeroing in on Elbaum’s account is jarring, at least initially. One expects to hear about the Holocaust years. How many viewers even know about what happened in the late 60s? An engaging scholar or two offering some commentary might have been helpful.

We also learn very little about the three leads. We don’t, for example, know anything about what either Celler or Elbaum does for a living or, more important, how their histories define their sense of Jewishness; or, for that matter, how the journey to Lodz changed their world views if indeed it did. And the ongoing music, by turns dramatic and soulful is distracting.

In the end you’re left wondering what the film is all about? Is the director suggesting that one can’t move forward without coming to terms with the past? It’s certainly a familiar trope, though not fully realized here.

Still, the final image is disquieting. Elbaum has temporarily retrieved the painting and rehung it on the wall of her old apartment, the space now covered in dust and cobwebs.

Returning to Poland, chasing ghosts and a lost painting