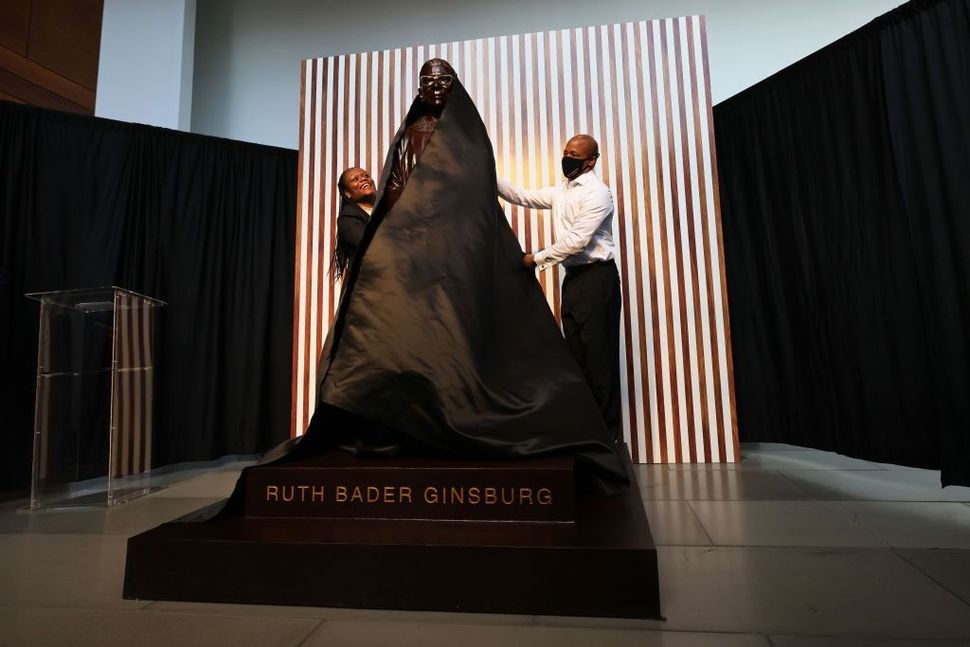 The statue is unveiled. Courtesy of Getty Images

Grocery shopping in Brooklyn has been as hellish, if not more so, than everywhere else in the pandemic. Trader Joe’s lines snaked fully around the block even during wintry weather. All year, the doors to City Point Brooklyn, where my closest TJ’s is located, have represented the joys of indoor warmth, everything bagel seasoning and bountiful snack options. And now, they can represent something even more exciting — women’s rights.

Or at least that was the gist of several stuffy speeches given by a selection of Brooklyn government officials at the unveiling of a life-sized bronze statue of Ruth Bader Ginsburg, newly installed just inside those hallowed doors.

This statue will help increase representation of women in public sculpture, they said, thus moving women’s rights forward. It will spur important conversations about the Supreme Court justice, they asserted. It will inspire young girls. Over and over, officials such as Brooklyn Borough President Eric Adams and Assemblywoman Rodneyse Bichotte Hermelyn affirmed that City Point, a privately-owned, mixed-use residential and commercial building, is the perfect location for the new statue because of the building’s high traffic.

“In her lifetime, Justice Ginsburg championed countless crucial causes. This statue is just a small reminder that we all need to set the highest possible standards for ourselves and society,” said Chris Conlon, EVP and Chief Operating Officer of Acadia Realty, on behalf of City Point. “From the people who work here, to the diverse shoppers and shopping at City Point, everyone feels welcome, equal and respected.”

Perhaps the justice had always dreamed of making American consumers feel equally respected as they buy avocados and granola. Speeches noted how easy it would be for shoppers to take selfies with the statue. Certainly no one mentioned the idea that placing RBG in the midst of what is essentially a shopping mall might not befit Ginsburg’s causes. 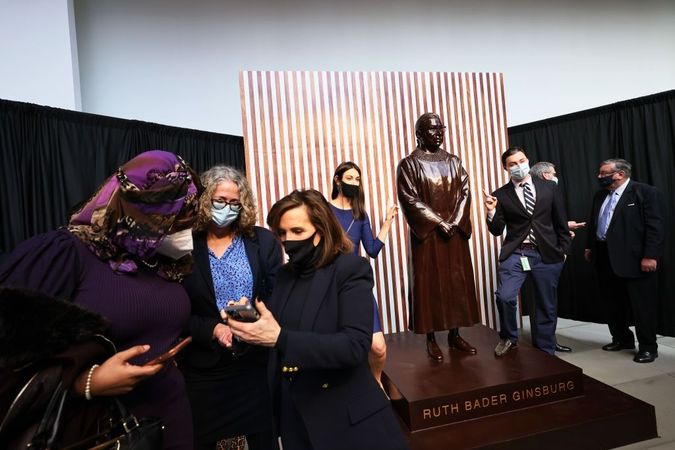 The gathered officials and luminaries take photos and selfies with the statue. Courtesy of Getty Images

It’s not that the speeches were wrong about City Point’s traffic. Placing the statue of Ginsburg in its hall does guarantee that thousands of people will walk past her (though City Point is currently booking reservations in 20 minute intervals to visit the statue).

However, public art is not just about traffic. And while the category encompasses murals, monuments, and abstract installations, all of which have different goals and effects, statues, particularly realistic ones such as RBG’s bronze, function to enshrine history. They’re didactic, made to impact their audience, to change and interact with their surroundings and history.

Statues of historical figures are meant to watch over and inspire; placing them in grandiose or beautiful public locations helps to solidify the legacy of whoever is depicted, enshrining them in the culture by enshrining them in the cultural landscape. Usually, they stand on plinths and gaze over parks, or proudly guard the doors to public buildings, gaining gravitas through their weighty materials and grand placement. You have to be important to become a public statue, but becoming a public statue also creates and solidifies importance.

Shopping malls are about the opposite — fast, disposable, almost ephemeral consumption. They are tawdry and shallow, not weighty and historical. Any art in a mall is something to be brushed by on the way to buy laundry detergent or kale, blending into the multitude of focus group-calibrated graphic design decisions that surround shoppers. Shut away in a regulated, private, branded space, a statue cannot meld into the life of the city, or become something to gaze at and wonder about as you dine al fresco with friends in Bryant Park, where Goethe and Gertrude Stein gaze over you. A statue that looks out over Target does not function to create the same grandeur and mythos.

“Public statues are made to inspire, celebrate success, and tell the most important stories of the community. By leaving out the women from this equation it is no wonder that women are still not seen as equals to men,” the artists who forged the Ginsburg statue wrote in a statement; the married couple, Gillie and Marc, installed 10 other statues of women, including Oprah Winfrey and P!nk, in New York City in 2019, raising the representation of women in public sculpture in the city from 3% to 10%, a fact the speeches at RBG’s unveiling repeated often. (Several of the initial statues, including Winfrey, have since been relocated out of the city.) 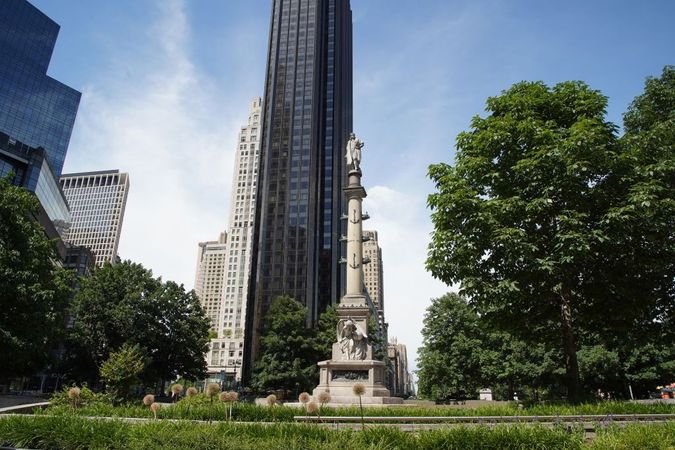 Yet simply increasing the number of statues of women does not amount to equality. Columbus has an entire roundabout in the center of Manhattan topped with a bronze statue of him, so dominating that the whole neighborhood is known as Columbus Circle (this is not the only place he sits). A bronze of Horace Greeley has its own park in Manhattan, and another presides over City Hall Park. George Washington, Lincoln, FDR, Goethe are all embedded into public life. Ginsburg, as of now, presides over a hipster grocery store and a cafe; a circus arts studio is under construction behind her. Despite being made of the same durable bronze as most public statues, she is protected, locked away after hours in a piece of commercial real estate, separated from her native Brooklyn.

In October, Gov. Cuomo promised another Brooklyn statue of Ginsburg, this one with a whole commission to oversee its creation. Let’s hope they find somewhere more fitting for the justice.