150 years ago in the French Civil War, Jews were on both sides of the barricades 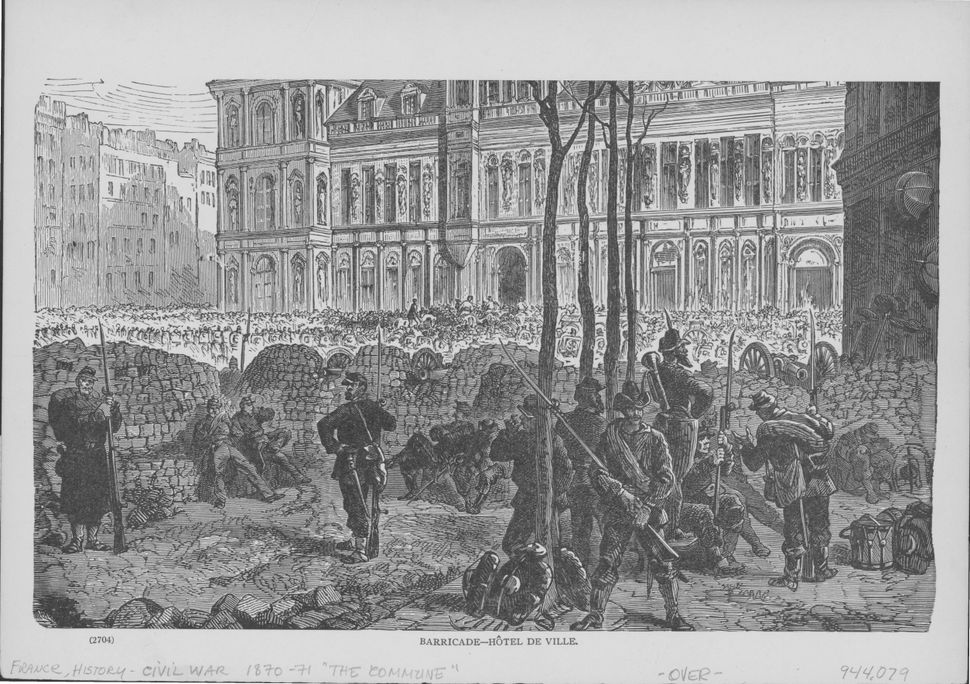 Today marks the 150th anniversary of the Paris Commune, the day France went to war against itself. On March 18, 1871, Parisians surprised the world (and themselves) by throwing a revolution. Declaring themselves an independent city — or commune — the Communards announced that they, and not the national government, embodied the republican spirit of 1789. For the next two months, as the world watched in horrified wonder, men and women, armed with opposing conceptions of the nation, confronted one another over barricades erected across the city.

French Jewry was no less divided, but the stakes for them seemed even more dire. It was less two Jews, three views, than two Jews and equally existential views.

How did the French — Jews and non-Jews alike — reach this point? In the months leading to the Commune, France had been shaken by a series of seismic events. There was, first of all, Prussia’s shattering military defeat of the imperial French army in 1870, followed by the collapse of the Bonapartist regime and birth of a republic. A punishing siege of Paris by the Prussians followed, ending with a humiliating peace treaty signed by the national government.

Outraged Parisians from the city’s working-class neighborhoods were determined to carry on the combat. They rejected the treaty, rebelled against their own government and recognized the legitimacy only of the municipal government — or commune — they had hastily heaved into existence. As a result, from one day to the next, an army of French provincials took over the city’s siege from an army of Prussian professionals.

Bombarded first by the Prussians and now by their fellow French, the Commune’s most compelling concerns were military and material. Yet during the 72 days of its existence, the Commune enacted an extraordinary series of policies anchored in the promise of past revolutions. Inevitably, some reforms were impractical. At the insistence of boulangers, for instance, night baking was banned — a boon to bone-tired boulangers, but a bust for all those doomed to dunking stale bread in their morning coffee.

Yet many more laws were not just progressive, but also practical. Schooling became not just free of cost and catechism, but compulsory for girls as well as boys. A women’s committee — the Union des femmes — formed by the Russian immigrant Elizabeth Dimitrieff created a corps of nurses for the city’s defenders and established a network of crèches, or daycare centers. In addition, the Commune declared a moratorium on rent for Parisians left without work since the German invasion, and requisitioned empty apartments for yet other Parisians left homeless by the siege. For Karl Marx, though, these and other reforms obscured the Commune’s greatest achievement. In his famous pamphlet “The Civil War in France,” he declared the Commune was a world-historical event simply by its “working existence.”

Yet it was this work-in-progress that some French Jews were stirred to defend, but many more were resolved to destroy. Neither side had forgotten that revolutionary France had, less a century before in 1791, made them full and free citizens. Moreover, neither side had forgotten that the republic served as the surest bastion for those rights. But the two sides, tragically, could not agree on the status of either the revolution or republic in 1871. Was the revolution over or ongoing? Should the republic be prudent or progressive?

These were questions for which French Jews on both sides were willing to sacrifice their lives. In the early days of the Commune, Captain Simon Mayer, as committed to revolutionary ideals as he was to republican law, vainly tried to prevent a crowd from killing two captured generals from the national government. When that same government, after the defeat of the Commune, tried Mayer for treason after the Commune’s fall, other officers captured with the generals testified that “Mayer did all that was possible to save us.” He was nevertheless condemned to appear before a firing squad, a sentence later commuted to life deportation.

On the other hand, the Hungarian immigrant Leo Frankel was shot. At the time, he was on the barricades during the Commune’s last stand — aptly called “la semaine sanglante,” or “Bloody Week.” Wounded, Frankel nevertheless managed to survive and escape to Great Britain. A goldsmith by trade, Frankel was a socialist by conviction. Named as “labor minister” by his fellow Communards, Frankel not only introduced several laws to improve conditions for workers, but also sought to make such laws redundant by establishing a series of worker’s cooperatives.

Most extraordinary, perhaps, was Gaston Crémieux. Born in the southern city of Nîmes, Crémieux was a poet and playwright who formed a southern army to rescue Paris from the besieging Prussians. Failing at this, the audacious Crémiuex went on to fail better, launching a commune in France’s second largest city, Marseilles. Fated to have an even shorter life than the Paris Commune, Crémieux’s effort collapsed in the blood of Communards massacred by the French military. But this only enflamed his revolutionary enthusiasm. Captured, tried and sentenced to death, Crémieux refused to wear a blindfold at his execution. Staring at the firing squad, he shouted “Aim at the chest, not the head. Vive la République!” With that, he gave the order to fire.

Yet even more Jews, including commanding officers like Théophile Cahen and Léon Franchetti, fought and died to retake Paris from revolutionaries like Frankel and Mayer. Tellingly, it was these lives and deaths that were celebrated and commemorated. The Jewish journal “Archives Israelites” hailed these men as heroes, declaring that their deaths “cast a bright light and honor all French Jews.” Not quite all Jews, given men like Mayer, Crémieux, or for that matter Maxime Lisbonne, whose disdain of enemy fire earned him the moniker of “D’Artagnan.”

The French Jewish press and institutions, however, had no need of D’Artagnans, much less those dedicated to revolution. By both conviction and calculation, most French Jews gladly committed themselves to the republic. As Jacques-Henri Dreyfuss, the chief rabbi of Paris, declared shortly after the Commune’s fall: “France must be united if she is to recover…And when religion proves unable to lift our hearts, we will have patriotism. God and nation are our religion!” This faith survived not just the trials of the Dreyfus Affair and two world wars, but even the Shoah.

How much longer, though, will this faith persist? On this anniversary, we might well ask ourselves if the recent rise of antisemitic attacks in France will make the clarion call “Vive la République” ring hollow.

150 years ago in the French Civil War, Jews were on both sides of the barricades