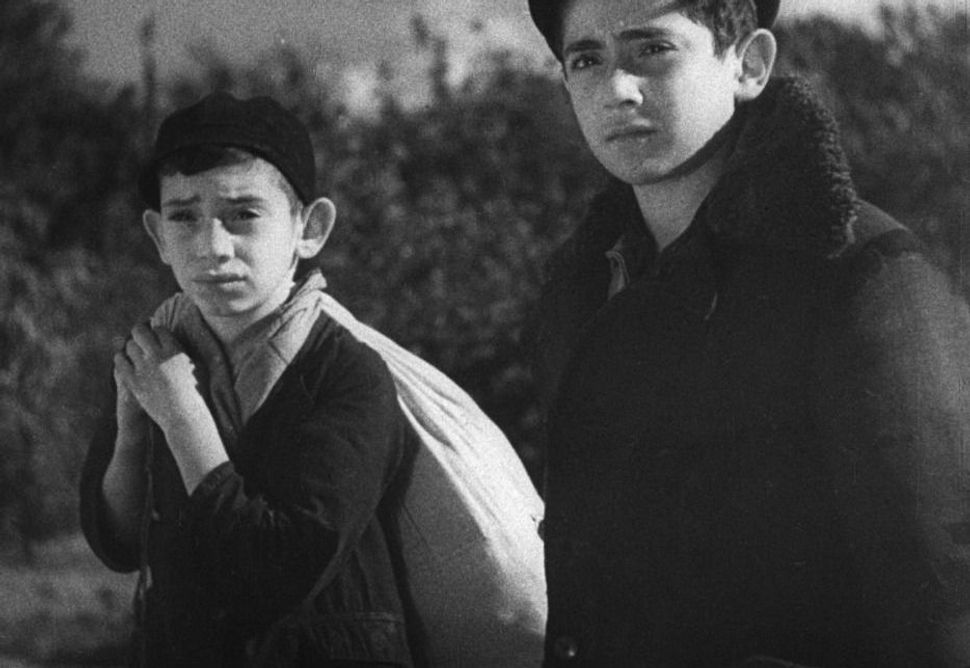 There is an expression in Yiddish—di kale iz tsu sheyn—the bride is too beautiful. Basically, the problem is—it’s too good. This is exactly my problem with a new Blu-ray disk set “The Jewish Soul: Ten Classics of Yiddish Cinema,” issued by Kino Lorber. It took me a while to start watching simply because I couldn’t decide where to start. The lavishly published boxed set includes beautifully restored and newly-subtitled Yiddish classics like “The Dybbuk” (1937) and “Tevya” (a 1939 precursor to “Fiddler on the Roof”), as well as lesser-known films, like “Her Second Mother” (1940) or “Eli Eli” (1940). The compilation is enriched with alternate versions and new commentary. I have seen many of these films before—but I don’t think I have ever seen them in such spectacular quality.

The set’s undeniable jewel is “The Dybbuk,” a Jewish possession story and one of the earliest horror films, complete with beautiful lovers, wise tzaddiks, kabbalistic magic and mysterious rituals. With its haunting score and folkloristic choreography, “The Dybbuk” represents the best of Yiddish cinema, its genres, styles, and stars. Although the film was made in pre-war Poland as an adaptation of a play by S. An-ski, based on even earlier East European Jewish folklore, watching it today it’s hard not to think about the Holocaust. The film captures the entire culture haunting us like a dybbuk. The Dybbuk’s rich meanings are evoked in illuminating commentary by J. Hoberman, a film critic for The Village Voice and the author of an authoritative book on Yiddish cinema, Bridge of Light. The set offers not only the best-known version of “The Dybbuk,” but also a condensed (and in my view, superior) cut of the film.

Not everything is in a minor key. “American Matchmaker” (1940), is a delightful Yiddish take on the Hollywood screwball comedies of that era, with irresistible songs. The film’s star, Leo Fuchs, aka “the Yiddish Fred Astaire,” cuts an endearing figure of an eternal bachelor, a code word for a gay man. In her commentary, Eve Sicular, a Klezmer musician and historian of queer Yiddish films, reads the film as a part of the “Yiddish celluloid closet,” and points out irreverent ways it circumvents the Hayes code.

While Hoberman and Sicular are both excellent, Allen Lewis Rickman steals the show. Rickman is familiar to most audiences as an actor (he stars in an enigmatic prologue to the Coen Brothers’ “A Serious Man”). But he is also a playwright, a director, and the translator behind the new subtitles in all of the films. He also penned an essay in an accompanying booklet introducing us to Yiddish cinema and culture.

Rickman shines especially when he comments on films that are— how should we say—not Oscar material. They are shund—the Yiddish version of B-movies, cheaply made entertainment for the masses—tearjerkers with musical numbers and comic relief interludes. Consider “Motel The Operator,” the tale of a sweatshop worker injured by strike-breaking thugs. His child gets secretly adopted, his wife commits suicide, and his house is destroyed. Don’t fret, everything ends well (spoiler alert!) when years later an improbable coincidence brings a homeless Motel to the beautiful home of his son’s adoptive family.

Watching “Motel The Operator” with Rickman’s commentary transforms the experience—we come to see even minor films as a kind of time machine, capturing the life and mores of its era. Rickman knows every crew and cast member intimately, as if they are family. In his telling, their personal stories come alive, reflecting the major Jewish experiences in the first half of the 20th century—pogroms and emigration, the Holocaust and new life in America, labor politics and the Zionist cause. Time and again, Rickman shows how each film was tied to its historical moment, making us appreciate deep meaning behind every gesture. In an “Overture to Glory” (1940), a film inspired by real-life events, a cantor leaves his insular community in Vilna to sing opera in Warsaw. He tells his rabbi: “Through my Polish singing they’ll hear my Jewish pain.” Compare it with the optimistic assimilationist outlook of “The Jazz Singer,” the plot of which treads in the same water. While The Jazz Singer is about the opportunities offered by the future, read America, Overture to Glory is mired in the traumatic past.

But if you want real time travel, watch the 1936 docudrama, “Mir Kumen On” [aka “Children Must Laugh”] by Aleksander Ford, a Polish-Jewish director who would later make the first films of the Holocaust (the documentary, “Majdanek” and a feature, “Border Street”). “Mir Kumen On” presents the everyday life of Jewish children in the Medem Sanatorium near Warsaw. From 1926 to 1939, the sanatorium treated thousands of Jewish children from poor urban families. Filmed on location, the film depicts actual residents. The camera captures the radiant faces of children as they share meals, take care of their pets, and exercise in the sun-lit courtyard. You fall in love with every single one of them, as you consider their fate. Those who grew up by the time the war started, ended up in the Warsaw ghetto and participated in the uprising. In 1942, the staff and children remaining at the sanatorium were taken to the death camp in Treblinka. The film was thought to be lost. But a careful restoration, splicing together fragments of copies preserved in archives and museums across the globe, brought it back to life.

Every film in this compilation holds fascination for its audience. The strength of “The Jewish Soul” is that it brings all these films and their stories together. By issuing it as a set of Blu-ray discs with an appealing design, Kino Lorber signals that these films are worthy of our attention. They are not just cinematic curios or minority films of interest to a few nostalgic viewers. With its high-quality restorations and encyclopedic commentary, the compilation will appeal to cinephiles and serve as an invaluable resource to scholars and students of Yiddish film, culture and language. “The Jewish Soul” shares with us a part of the historical legacy the Yiddish films left behind, to be enjoyed, studied, and remembered.