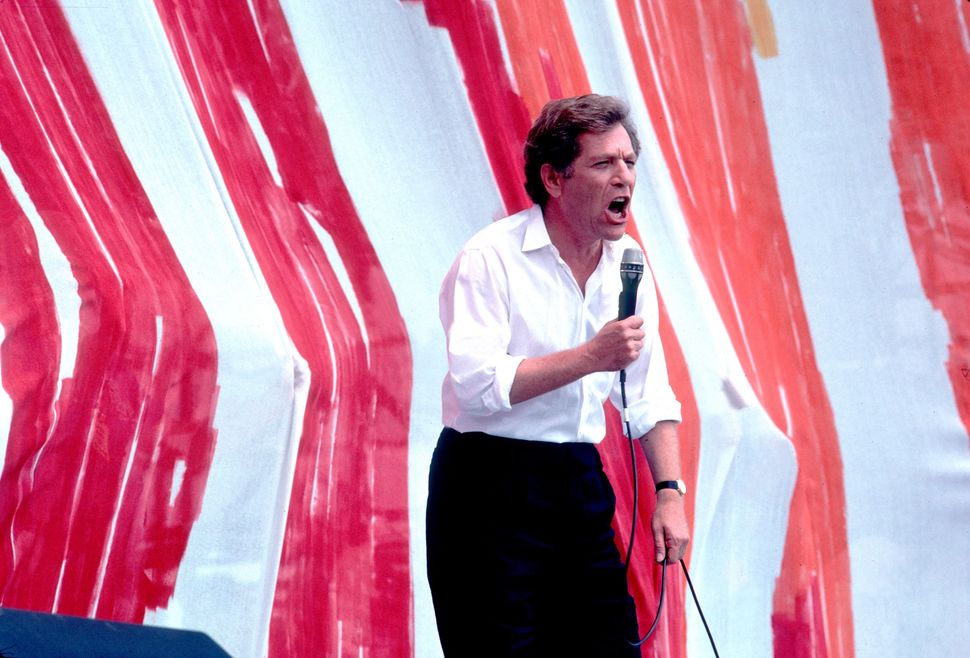 George Segal, who died on Mar. 23 at age 87, had a singular screen impact as an explicitly and implicitly Jewish actor starting in the 1960s.

Remembered best by younger audiences for delivering sitcom lines at rapid fire tempo in the series “Just Shoot Me!” (1997–2003) and “The Goldbergs” (2013–2021), Segal was an infinitely more nuanced performer than these vehicles allowed him to convey.

Raised in Great Neck, New York, in a Russian Jewish immigrant family, Segal’s quintessential role was possibly in “Bye Bye Braverman” (1968) directed by Sidney Lumet. Segal plays a public relations executive who faces mortality as one of four Jewish “third-string literary intellectuals” who attend a funeral after the sudden death of a friend, another “secondary talent of the highest order.”

Possibly because the film is based on a strong novel by Wallace Markfield in which the defunct pal was inspired by the short-lived Chicago-born author Isaac Rosenfeld, there is powerful emotional reality in “Bye Bye Braverman,” including Lumet’s capturing of New York cityscapes.

Delectably cast, the film also features the Canadian Jewish actor Joseph Wiseman, best remembered for incarnating Dr. No in the James Bond film of that title, and the character actor Sorrell Booke, as two of Segal’s comrades. Further unforgettable turns are delivered by the African American comedian Godfrey Cambridge as a Yiddish-speaking cab driver and another stand-up comic, Alan King, as the rabbi delivering the eulogy.

Tellingly, King’s rabbi denounces a supposed Jewish tendency to cancel out “every pleasure with an equal and opposite pain, a Jewish variation on Newton’s Laws.”

This anticipation of tsouris was present in another Segal film with extra Yiddishkeit, “Blume in Love” (1973), written and directed by Paul Mazursky.

Playing a frankly odious divorced man who ruthlessly maneuvers to regain the affections of his ex-wife, Segal exploits what Film Comment in March-April 1975 called his unsurpassed “klutzy charm” and “seriocomic capacity for suffering…and no film has used his manic hopelessness as well as ‘Blume in Love.’”

Indeed, Segal became the go-to actor for portraying sons subjugated by unruly Jewish mothers, in the dark comedy thriller “No Way to Treat a Lady” (1968) based on a William Goldman novel, and Carl Reiner’s deliberately outrageous comedy “Where’s Poppa?” (1970).

Even when he was not clearly playing a Jewish character, Segal’s Yiddishkeit sometimes resonates onscreen, as when menaced by the Aryan-looking neo-Nazi played by Max von Sydow in the spy thriller “The Quiller Memorandum” (1966), scripted by the English Jewish playwright Harold Pinter.

No less chillingly, in the same film Segal was also menaced by an intelligence officer ostensibly on his side, played by Alec Guinness in a Hitleresque mustache, munching on liverwurst sandwiches at Olympiastadion, a sports park in Berlin, built for the 1936 Nazi Summer Olympics.

Likewise, in the comedies “The Hot Rock” (1972) and “A Touch of Class” (1973), Segal’s Jewishness provided a light-hearted contrast to the WASP-y sobriety of characters played by Robert Redford and Glenda Jackson, respectively.

But alongside Elliott Gould (born Goldstein) in Robert Altman’s “California Split” (1974), about two gambling addicts, Segal brought an aura of an inveterate Jewish gambler, even if his character was not so identified in the script.

Segal was among the first Jewish screen actors not to assume a Gentile-sounding stage name, nor did he undergo plastic surgery, as he told The New York Times in January 1971:

“I didn’t change my name because I don’t think George Segal is an unwieldy name. It’s a Jewish name, but not unwieldy. Nor do I think my nose is unwieldy. I think a nose job is unwieldy. I can always spot ‘em. Having a nose job says more about a person than not having one. You always wonder what that person would be like without a nose job.”

To arrive at this level of self-acceptance took years of preparation, including a stint at the Actor’s Studio, toiling in vain to impress the legendary American Jewish acting teacher Lee Strasberg. As Segal later told an interviewer, Strasberg was “on the sour side, didn’t speak much or deal well with people.”

By contrast, Segal received congenial advice from Jewish acting colleagues, like Lee J. Cobb, with whom he acted in a 1966 TV movie of Arthur Miller’s “Death of a Salesman.” Cobb, born Leo Jacoby, advised Segal that to act, “you just pretend. You pretend like when you’re nine years old that you’re sad or happy or that this or that is happening to you. That’s it.”

This counsel proved pertinent in a career which had already included some ups and downs, as when he auditioned for the film version of “West Side Story” (1961) but was rejected as “maybe too old.” Then he tried to land the role of Perchik, a radical tutor, in the 1964 Broadway premiere of “Fiddler on the Roof.” but failed again, with others rebuffed by director Jerome Robbins for that part, including Elliott Gould, Ron Liebman, Ron Rifkin, and Gene Wilder.

Segal was even considered for the title role of the movie “Tootsie” (1982), directed by Sydney Pollack, at early planning stages, until he was, as with “West Side Story,” deemed “too old.”

Even when hired, Segal was not always guaranteed smooth professional sailing. He quit the movie “10” (1979) written and directed by Blake Edwards, complaining that scenes in the script didn’t make any sense. But a biographer of Julie Andrews claims that Segal’s departure was because script changes augmented the role of Julie Andrews, the director and screenwriter’s wife.

Nevertheless, Segal remained a sought-after actor due to his bonhomie, which he later recalled extended to the filming of “Who’s Afraid of Virginia Woolf” (1966) directed by Mike Nichols. Work days ended for the performers at 5 or 6pm when a “guy came in with two Bloody Marys, one for Elizabeth [Taylor] and one for Richard [Burton].”

His appetite for a diverse range of acting remained intact, and in 1999 he was seen on Broadway in the French Jewish playwright Yasmina Reza’s “Art” alongside Buck Henry (born Henry Zuckerman), a fellow struggling improv comedian decades before.

Almost 40 years earlier, Segal had performed on Broadway in “Gideon” (1961–62) a play by Paddy Chayefsky inspired by the Book of Judges in the Bible. Exploring the relationship of people to God, Chayefsky’s Gideon is recruited by The Angel of the Lord to perform a miracle, rescuing Jews from idolatry by winning a battle in which 300 Israelites defeat 120,000 Midianites.

A less ambitious, but meaningful retrospective look at Jewish history was offered in “Bye Bye Braverman,” in which Alan King’s rabbi reminds mourners of a bygone era, a “time when you celebrated a birth and mourned a death, and in between you recognized, clear and simple, you were growing older, you were aging and dying every minute. And when a man died no one was afraid to make a scene… . Nowadays they can’t wait to bury and forget.”

There is no chance that the vivacious and endearing performing talent of George Segal will ever suffer such a fate.