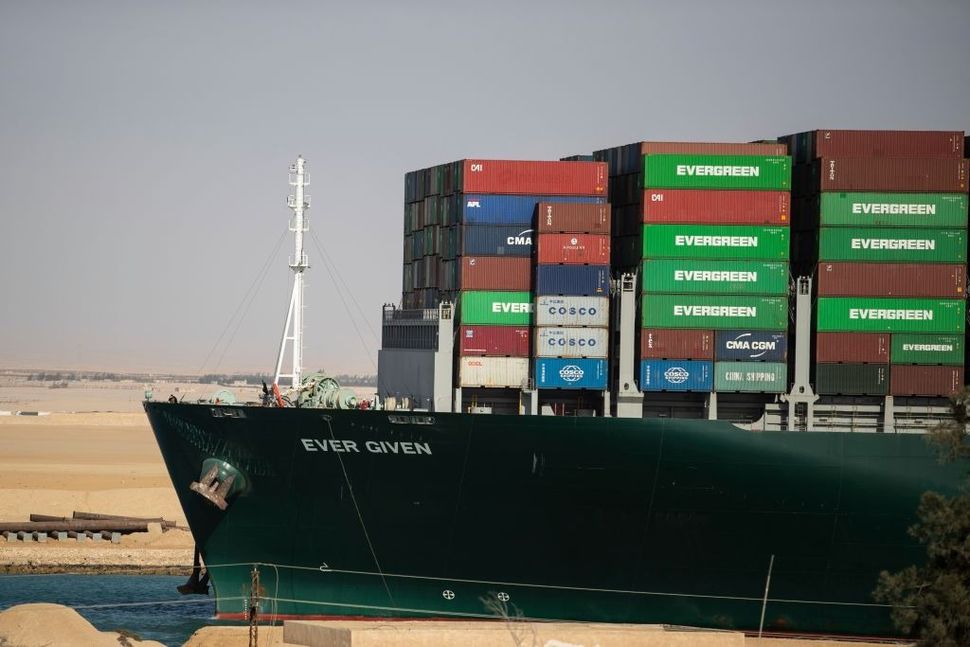 The Ever Given in the Suez, after its freedom. Courtesy of Getty Images

Each year, at Seders around the world, kids perform skits of the Passover story, acting as Moses begging for freedom, or the Pharaoh stubbornly refusing to budge. This year, however, the whole world acted out the Passover story.

The part of Pharaoh was magnificently played by Ever Given, an enormous cargo ship that blocked the Suez Canal for six days. The part of the Jews was played by basically all of global trade, embodied by the heavily-laden cargo ships which depend upon the narrow, man-made passage through Egypt. The pitifully small crane digging out the behemoth vessel could be Moses, pleading with the Pharaoh. For plagues, well, we’re in a pandemic.

We retell the Passover story each year, to help us recall the ways in which we are still stuck in a “narrow place,” as the rabbis often translate Mitzrayim, the Hebrew name for Egypt. We try to appreciate the freedom and hope we have. We are encouraged to engage with the story in new ways, to ask questions and reinterpret.

Like the Pharaoh, the Ever Given trapped the other cargo ships in Egypt, and wouldn’t (or couldn’t) let them go. The ship was blown into the canal by high winds (though human error may have also been an issue). In the Exodus tale, the Pharaoh nearly lets the Jews go several times, but God hardens his heart instead. In the case of the hulking ship, nature played a similar role — from the winds that wedged the ship sideways across the canal, forcing its bow deeply into the bank, to the rhythm of low tides wedging the boat in further. Like Pharaoh, the Ever Given didn’t mean to block everyone in Egypt; a higher power lodged its bulbous bow in the bank and grounded it on the shallow, low-tide canal floor.

Some interpretations of the Exodus story, such as those by Yair Zakovitch, also speak of the Jews’ responsibility for their own predicament; the biblical text gestures at exiles as punishment for Sarah’s mistreatment of Hagar or for leaving the promised land of Canaan to come down to Egypt. Plenty even doubted Moses when he tried to lead them out of Egypt, fearing the unknowns of freedom. Similarly, we the global consumers got ourselves into this mess by deciding to dig a narrow, relatively shallow canal through the desert and hinge our entire trade system on sending gargantuan ships through it. Yes, there’s a reason for doing it (saves time and money), just as there was a reason the Israelites went down to Egypt (famine), but we should have found a better solution sooner, even if it was hard and expensive. This isn’t even the first time this has happened! 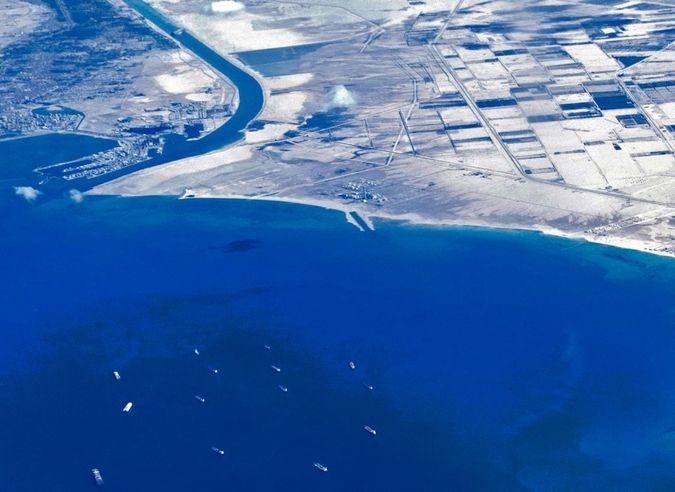 Boats trapped in the Red Sea, seen from a plane. Courtesy of Getty Images

And then let’s think metaphorically about slavery. The stuck cargo ship blocked many shipments of all kinds of goods from reaching their destinations on time, causing crises in a wide range of industries as parts and supplies got stranded in the Red Sea. The most important cargo was likely oil. Syria and Lebanon both found themselves facing fuel shortages and considering rations on gas because of the shipping delay. Perhaps the impact of a delayed oil shipment shows our enslavement to a limited resource (and one that pollutes the world we live in).

In fact, every delayed shipment further enslaves us to our own addictions. Why is our economy so dependent on the retail goods, food or even livestock that are on the hundreds of boats still stuck in the Red Sea, even now that the Ever Given has been freed? This zany news story has taught me that our entire economy is haphazardly built on the need to consume. If we didn’t expect our every whim to be both accessible and cheap, perhaps we would not be bleeding $400 million an hour due to a giant tin can wedged in a stream barely one-tenth of a mile wide.

In fact, the Ever Given isn’t even the Pharaoh, really, even if it’s ostensibly responsible for blocking everyone else. It’s just another pawn to the real Pharaoh — capitalism.

The boat was freed Monday afternoon. But have we really reached freedom — or are we still slaves to our consumerism, impatiently awaiting our delayed IKEA shipments?