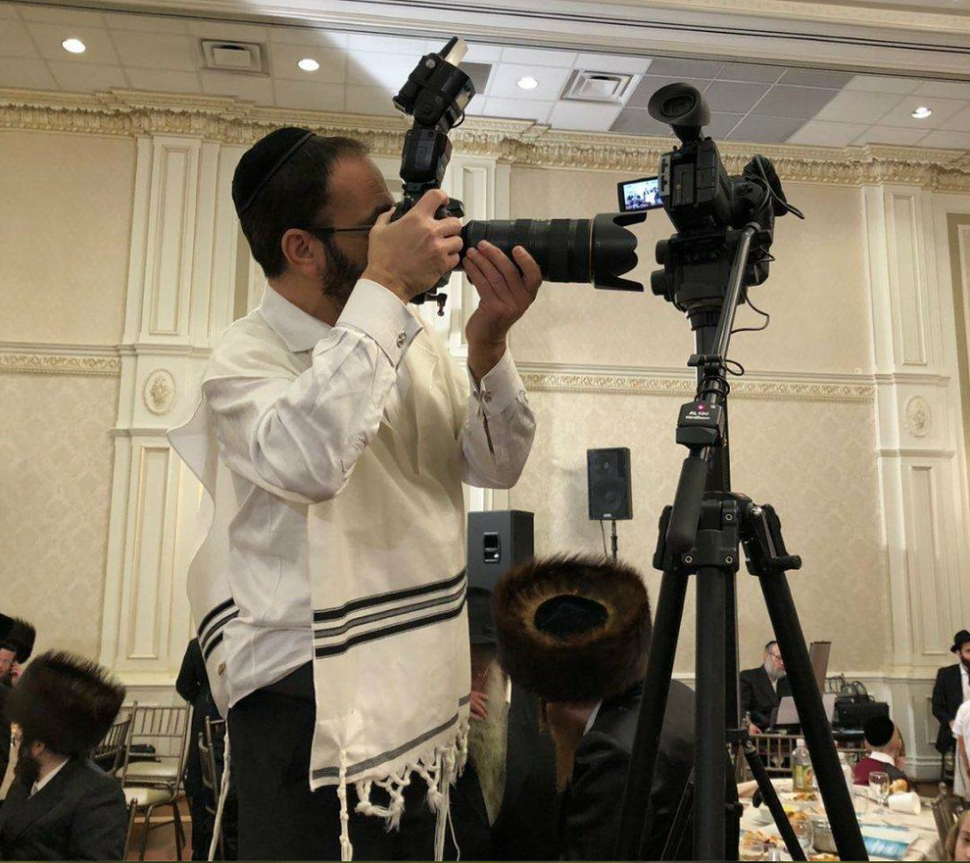 For Heshy Rubinstein, a Brooklyn photographer who has interviewed some 600 survivors over the past 15 years, Holocaust documentation is a family affair. The 62-year-old Borough Park resident and son of survivors from Hungary recalls how his son, Yossi, a curious child who voraciously read about the Holocaust, started interviewing his grandparents and several of their neighbors in nearby Williamsburg when he became a teenager.

The family patriarch, Lipot, who endured labor camps and a death march, readily shared his experiences; in recent years, he has been featured at several Yom HaShoah events and addressed hundreds of schoolchildren. However, the Rubenstein matriarch, Magda, an Auschwitz survivor who passed away a few years after Yossi convinced her to sit down with him for an interview, only spoke about it that one time.

“I was so impressed that I got into it myself and started pursuing it even more than him,” Rubinstein said. 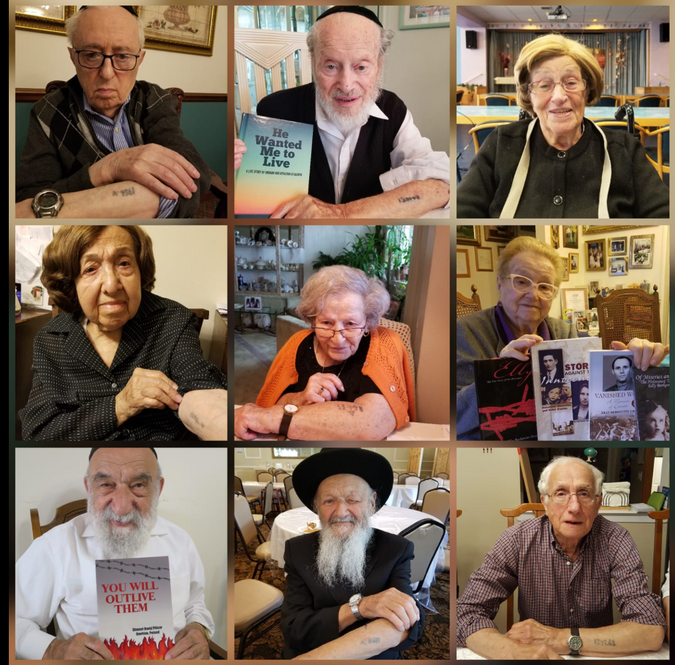 While the shoestring operation has roots in the family’s religious enclave, word of mouth, social media posts and a growing network have catapulted the project further afield. Most of the survivors Rubinstein interviews live in the New York area and Southern Florida but, with the help of Yossi, now 38 and based in Jerusalem, his daughters Frummie and Esti, who live in Antwerp, and his second wife, Leah Betesh, a mindfulness coach who grew up in Mexico, he has done interviews on trips to Israel, Europe and Latin America.

Rubinstein’s interviews are similar to those conducted by the Shoah Foundation and United States Holocaust Memorial Museum, covering the lives of survivors before, during and after the war. With his Yeshivish accent and casual style, Rubinstein seems to put his interview subjects at ease, and his reverence for them is evident. “Holocaust survivors are precious,” he said, adding “At the end of every interview, whether the person is religious or not, I ask them to give me a blessing.”

The recorded interviews have a raw authenticity that is increasingly important as the survivor generation is receding alongside corresponding rises in Holocaust denial and antisemitism. The latest estimate from the Claims Conference puts the number of survivors still alive at approximately 350,000, roughly 60,000 of them in the United States. This concern, in particular, weighs on Rubinstein, who finds that the common denominator in all of his interviews is the authenticity of the survivors’ experiences. “When you see them alive in the video, that’s the true witness, the evidence that cannot be denied,” he said. Indeed, through Rubinstein’s straightforward footage, taken in the intimacy of their homes, the survivors speak directly to us, without any pretense. 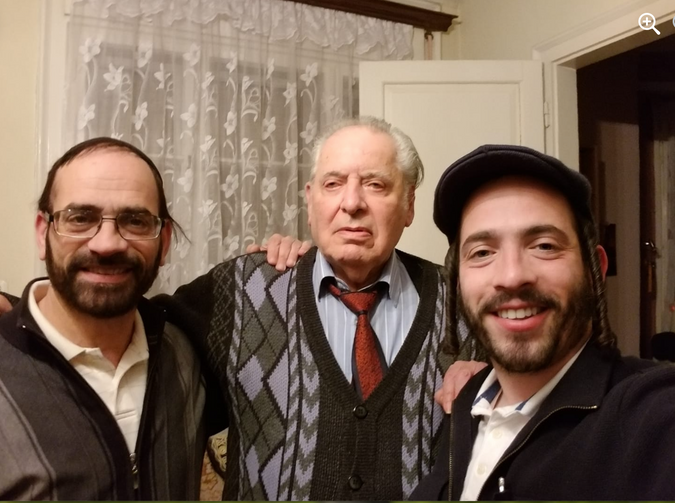 From One Generation To The Next: Heshy and Yoshi with one of their interview subjects. Courtesy of Heshy Rubinstein

Rubinstein’s earlier career as a private investigator has come in handy. He got into that line of work after investigating cases for an accident attorney and helping to establish the first shomrim society (a volunteer safety patrol) in Borough Park in the early 1980s. (In the latter capacity, he partnered with Guardian Angels founder Curtis Sliwa, with whom he reconnected in January 2020 to combat a rise in antisemitic attacks.) He was mostly hired to look into personal and business matters within his community and didn’t like making enemies. “So I dropped being a P.I. and started doing photography,” he said. “When you go to simchas everyone is happy.”

A self-taught photographer and videographer, Rubinstein began booking bar mitzvah and wedding gigs using the equipment he already had from his investigative work. Photography has since become the unofficial family business: He trained another son, Shimmy, who’s now one of the most popular photographers in the community (“I’m old school; he took it to the next level,” Rubinstein kvelled). He notes that his daughter Frummie is also a photographer, as was his grandmother.

Rubinstein shares sober portraits taken at each interview on Facebook (where he posts as Heshy Rubi) and Instagram (ww2survivors). Some of his interviews have been featured in Dee Voch, a weekly Yiddish magazine he launched in 2009. Although the straightforward images are strikingly potent, “They’re not the most professional photographs,” Rubinstein said, explaining “I don’t like to drive them crazy. I want them to feel comfortable and I want to get their stories.” 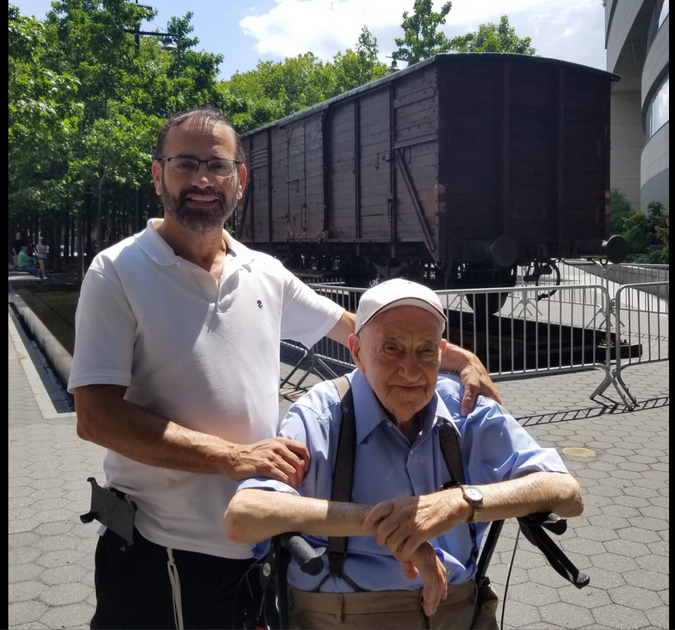 He stresses that he will never try to convince people to speak with him because he understands how painful it can be, but he and his kin have a way of getting survivors to open up. More than once, children of survivors were shocked — and delighted — to learn that Rubinstein had recorded interviews with their parents because they never spoke about their experiences. He is also a resource for professionals in the field. Dr. Efraim Zurhoff, an Israel-based Nazi hunter for the Simon Wiesenthal Center, recently contacted Rubinstein to see if he knew any survivors of the Sachsenhausen concentration camp for an upcoming war crimes trial in Germany; Rubinstein searched his archives and found that he had interviewed several.

Rubinstein says that he has connected countless survivors — distant relatives, childhood friends and people who were together during the war. His investigative background has also helped him secure some hard-to-get interviews, among them one, Martin Greenfield, the Buchenwald survivor who is a tailor to presidents, actors and athletes, and Seymour Nussenbaum, a member of the 603rd Engineer Camouflage Battalion, known as the “Ghost Army” for its secret role in deceiving the Nazis during the war by impersonating Allied units.

Rubinstein’s project has been hit hard by the pandemic. Once he conducted as many as three interviews in one day; he has recorded fewer than 10 since last March. “Many people that I interviewed and many people that I scheduled to interview passed away,” he said. “It’s very painful.”

Things are starting to pick up, though. Rubinstein recently interviewed a woman who recovered from COVID (he wore a mask, she did not, and they followed social distancing guidelines) and he has arranged to interview a Jewish World War II veteran this spring, when the man will be fully vaccinated.

In the long term, he hopes to create a book featuring 50 or more survivors, mindful that most people won’t read the hundreds of individual memoirs in print. He has also enlisted his wife’s son to edit his interviews into shorter films that he plans to share via You Tube.

For now, though, he is focused on interviewing as many survivors as he can. As he put it in one of his Facebook posts: “Your story is our history. It is our duty to record and remember.”

Jeannie Rosenfeld is a New York writer specializing in fine and decorative arts, design and material culture. The granddaughter of four Holocaust survivors, she also serves as co-chair the Holocaust Commemoration Committee at her children’s school.