The artist who transfixed Albert Einstein and Jean-Paul Sartre 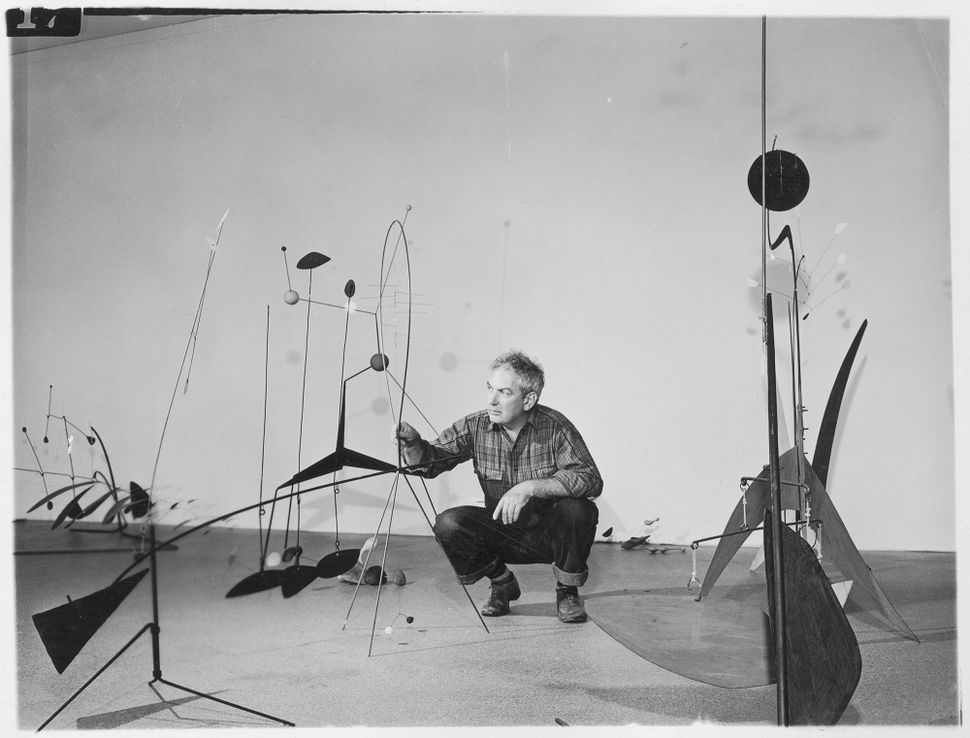 Going Mobile: A publicity photograph of Calder during the installation of “Alexander Calder” (September 29, 1943–January 16, 1944). Courtesy of MOMA

As a teenager I would often mistake Alexander Calder’s work for that of Joan Miró and sometimes even Picasso. Bold, playful and abstract, the sculpture of these three art giants appeared interchangeable. Visits to Fundació Joan Miró in Barcelona and Musée Picasso in Paris only seemed to confirm Calder’s European influences, even though the darker elements at play in their work seemed absent from his own. Being introduced to the wire lion tamers and acrobats in his “Cirque Calder” several years ago in the lobby of New York City’s Whitney Museum, at that time in Marcel Breuer’s brutalist edifice, reinforced that European connection. It also reminded me of another: Calder’s enormous, red “Flamingo” in front of Mies Van der Rhoe’s Kluczynski Federal Building in Chicago.

Then I discovered that, after leaving his early Greenwich village life, Alexander Calder (“Sandy” to his friends) had lived up the road from me in Connecticut. The plot thickened. It wasn’t until last year that I learnt of Calder’s European pedigree, not only in terms of his Romanian Jewish mother and Scottish paternal grandfather, but his chance meeting of his future wife, Louisa James, on the deck of the “De Grasse,” during a return journey from Paris in June 1929. That she was the grandniece of the Anglophile author, Henry James was even more intriguing. On further examination, Calder’s somewhat nomadic childhood had played out like one of James’s novels. Despite moving from Philadelphia to Arizona, California, New York and back again, Calder’s singular constant had been a love of tinkering, crafting wire jewelry and toys for his sister’s dolls. Earning a degree in mechanical engineering, he subsequently took classes in the Art Students League of New York, but it was to Paris that he gravitated in 1926. 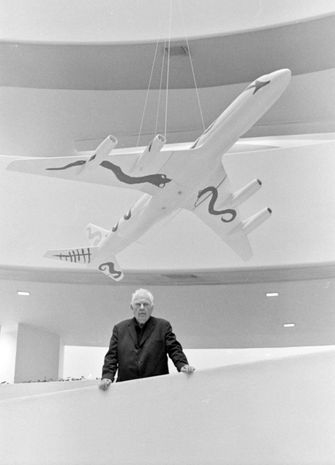 On the Steps of the Guggenheim: Artist Alexander Calder and his painted jet airplane models in August 1973. By Getty Images

Enrolling in L’Académie de la Grande Chaumière, Calder positioned himself at the epicenter of bohemian avant-garde artistic life, where Modigliani had died just a few years earlier and Chagall was among many artists staging a post-World War I comeback. Hobnobbing with philosophers, writers, artists, sculptors, musicians and performers in the Montparnasse district, Calder furthered his interest in wire as a medium, this time creating figures and likenesses. He integrated portraiture and sculpture, interestingly the occupations of his mother and father, respectively. Farm animals, circus characters and well-known figures such as Josephine Baker and Kiki de Montparnasse all became his subjects. Suspending and balancing these forms, even using some in narrated performances, Calder liberated them from mounted frames and display plinths, which would have been typical of the era. Currently, many of these are also the focus of one of MoMA’s three galleries comprising “Alexander Calder: Modern From the Start.” The remaining two galleries and Sculpture Garden predominantly feature his more familiar, larger scale works. 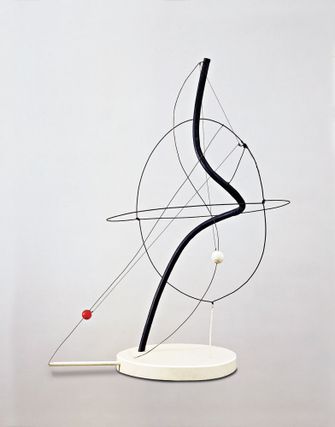 A Universe: A 1934 Calder artwork — painted iron pipe, steel wire, motor, and wood with string. Courtesy of The Calder Foundation

As Calder’s subject matter grew, so did his materials and desire for motion. He met the Catalan artist Joan Miró, also living in Montparnasse, a year later. They became lifelong friends and admirers of each other’s work. Pablo Picasso attended Calder’s first exhibition of non-objective sculpture in 1931 at Galerie Percier in Paris. Fernand Léger wrote the preface to its catalogue. Marcel Duchamp coined the now ubiquitous term “mobiles” for Calder’s kinetic sculptures, Jean Arp attributed “stabiles” to his stationary ones. A visit to Piet Mondrian’s nearby studio in 1930 reportedly gave Calder “the shock that converted” him to abstraction. Observing the placement of orthogonal canvases in Mondrian’s studio, Calder recognized that the whole environment had become the art itself. He remarked, “It was hard to see the ‘art’ because everything partook of the art.” Then came his Eureka moment, “Perhaps it would be fun to make these rectangles oscillate”. A new genre had arrived.

Following MoMA’s 1934 acquisition of Calder’s “A Universe” and the commission of “Lobster Trap and Fish Tail” five years later, for its new building, the Museum staged Calder’s mid-career retrospective in 1943. Although Calder gradually moved towards larger works, he had found his theme: “At that time and practically ever since, the underlying form in my work has been the system of the universe”. When “A Universe” was first exhibited at the Museum, Albert Einstein reportedly stood “transfixed in front of its slowly moving orbs for the entire forty–minute cycle.”

Due to the practical considerations of World War II, Calder made a series of smaller sculptures with more economic materials in 1945. Enamored of the portability of these wire and wood “Constellations,” Marcel Duchamp convinced Calder to disassemble them and send them to Paris. An exhibition of the reassembled pieces at Galerie Louis Carré, one year later, with an essay by Jean-Paul Sartre, and visited by Henri Matisse, effectively relaunched Calder onto the post-World War II European and global stage. 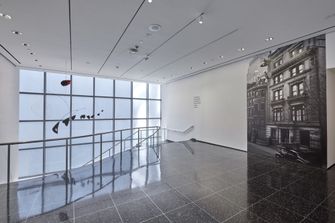 *Installation View:** “Alexander Calder: Modern from the Start” is currently running at The Museum of Modern Art in New York. By MOMA/Robert Gerhardt

In love, too, it seemed that his art was inseparable from its motion-filled environment. The couple married in 1931, bought a farmhouse in Roxbury, Connecticut, raised two daughters and later acquired a studio in the village of Saché, southwest of Paris. Both homes were often a whirl of European artists where dancing featured highly and friendships were forged and strengthened. Positive stories abound of Calder’s gregarious nature — the warm couple welcomed European exiles during the war, befriended those they had previously met in Europe and even those they hadn’t, such as cartoonist Saul Steinberg. Jed Perl, the author of a two-volume biography of Calder, spoke of the couple’s “extraordinary gift of friendship which spanned continents and oceans.” He also noted that “we think of globalism as a new invention and yet, at least among artists, globalism has been forever.”

It was Jean-Paul Sartre who stated, “One of Calder’s objects is like the sea, always beginning over again, always new.” Fittingly, it is the memory of that ship’s voyage, to and from Paris almost a century ago, that continues to inspire. During these days of wanderlust, when travelling through one’s own universe has become almost as cumbersome as in those early days, one is grateful to MoMA for putting much of Calder’s work online. Through both portals, actual and virtual, one can gain a deeper understanding of MoMA’s early stewardship of Calder, whose innovative sculpture, appealingly soars with modernist European existentialism. Thankfully his mobiles and stabiles, situated across the globe, have become more accessible due to social media and digital technology, negating the need to board an ocean liner and navigate those tricky waters. Potential romantic encounters notwithstanding.

Alexander Calder: Modern From the Start is currently showing at MoMA until August 7th..

Sarah Balcombe is an architect, artist and founding editor of the arts blog www.manhattanmodernist.com. Her artwork can be seen at www.sarahbalcombe.com.

The artist who transfixed Albert Einstein and Jean-Paul Sartre