Once the staple of New York politics, whatever became of the knish? 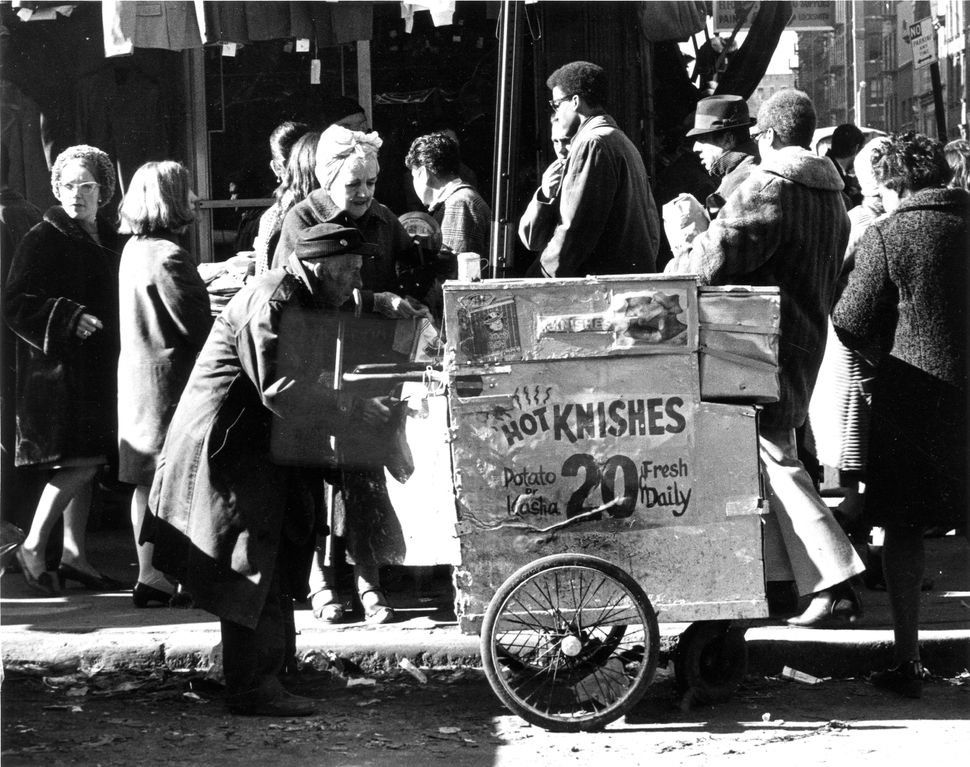 Meal on Wheels: A pushcart vendor on Orchard Street on Manhattan’s Lower East Side offers knishes at 20 cents apiece. By Getty Images

All ten leading New York mayoral candidates seem to agree on one thing: New York bagels are better than California bagels (no matter what The New York Times says). Food is an easy way for politicians to win points and present themselves as relatable. Besides, being asked your bagel order is a softball question compared to defending your affordable housing plan. That is, unless you toast your bagel (like Mayor De Blasio) or think lox and raisins go together (like past gubernatorial candidate Cynthia Nixon). This year’s candidates have tweeted out pics of their lunch to prove that they are real New Yorkers, but missing is the once staple of New York politics: the knish. 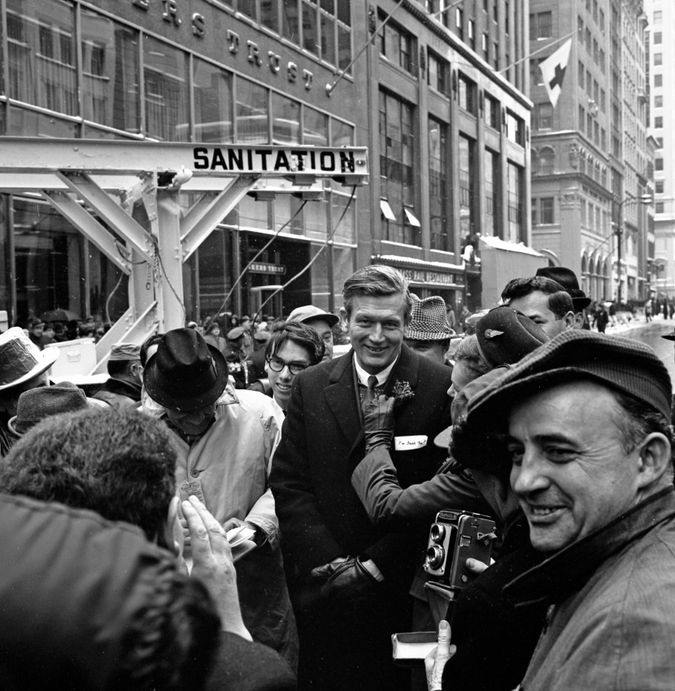 “No New York politician in the last 50 years has been elected to office without having at least one photograph showing him on the Lower East Side with a knish in his face,” Milton Glaser and Jerome Snyder wrote in the “Underground Gourmet” in 1968.

“It became part of what was almost a ritual,” said Chris McNickle, author of “To Be Mayor of New York: Ethnic Politics in the City.” “Each candidate would eat a knish, eat Italian food, and march in the St. Patrick’s Day parade,” thus checking off the boxes for what were once the city’s largest ethnic groups.

“The knish was symbolic,” McNickle said. “It was a way for, in particular, a non-Jewish candidate to acknowledge the traditions and rituals and significance of the Jewish voting group.”

For the most part, it worked. In the 1940s, just the prospect of the esteemed Eleanor Roosevelt noshing on a humble knish drew crowds of curious Jews. At other times, these photo ops backfired and were deemed pandering. In 1971, Jewish protesters pelted Mayor Lindsay with rocks and declared, “It will not be enough for him this year to put a yarmulke on his head and eat a knish.” 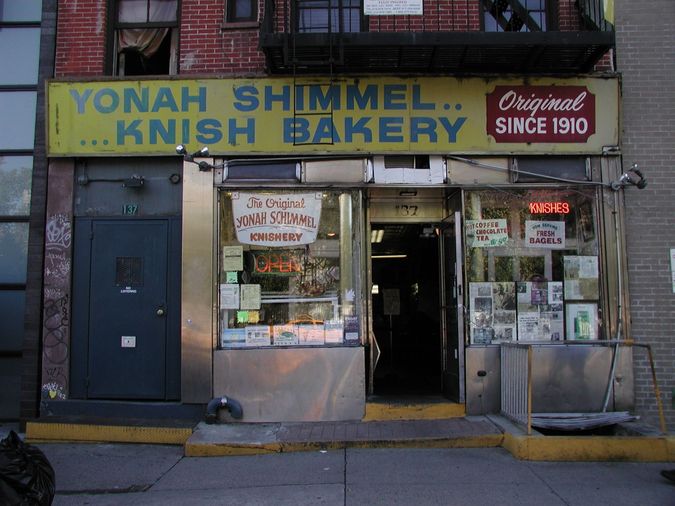 Good Luck Charm: Yonah Schimmel arrived in America as a Torah teacher, but he turned his attention to knishes. By iStock

This year’s mayoral candidates Andrew Yang and Scott Stringer need not fear being stoned if they walk into Yonah Schimmel’s Knish Bakery, the city’s preeminent knishery, open since 1910. “All candidates are welcome,” owner Ellen Anistratov said. Even Brooklyn Borough President Eric Adams, a vegan, can chow down on a parve knish in good conscience. New York mayors dating back to Jimmy Walker in the 1920s have stopped in for softball-size round-baked knishes. Anistratov believes the potato pies bring politicians good luck thanks to their connection to Yonah Schimmel. Schimmel arrived in New York in the 1880s as a Torah teacher. “His desire was to share the energy of the bible,” she said. “This energy he transformed into the knish.” She believes their kasha or jalapeño-cheddar knish is a Jewish talisman. But the number one reason Anistratov thinks her bakery should be a campaign stop is that “It represents New York.”

She’s right. In a sense, knish politics, like the knish itself is a New York thing as much as a Jewish thing. Knishes were invented centuries ago in Eastern Europe. Still, whoever on the shtetl thought to encase potato, kasha, cabbage, or even liver in an easy-to-hold pastry dough must have anticipated the New York street corner. The hot dog had to be dressed up in a bun, and pizza needed to be sliced in eighths to be handled by a New Yorker on the go. The knish arrived at Ellis Island ready-made for a baseball stadium or Delancey Street. Later, would come its cousins, the empanada, the samosa and the Jamaican patty, but first, there was the knish. “It was the quintessential 19th-century New York food,” Suzanne Wasserman, New York food historian, told The New York Times in 2003.

In the 20th Century, the knish was Americanized: squared, fried, frozen, and mass-produced. However, unlike the bagel or the pizza, neither the round or square Coney Island-style knish would be adopted by airport food courts or fast-food chains. It would remain an almost exclusively New York cuisine. For barnstorming politicians, even correctly ordering a knish signaled “you’re one of us.” Laura Silver wrote in her book Knish: In search of the Jewish Soul Food, “So ingrained was the knish in New York life that its name doubled as a litmus test for authentic New Yorker status.” Insider tip for any would-be carpetbagger: the “k” is pronounced.

New Englander Robert F. Kennedy’s visit to Yonah Schimmel in 1964 not only allowed him to court Jewish voters; it also won him street cred. “The knish was every person’s food,” says Silver. They were sold from knisheries, delis, and especially pushcarts. Until 1967, New York food carts had to keep moving. The simple three-wheeled operations mainly offered hotdogs, salted pretzels, and potato knishes. Of the three options, the knish was the most filling and the most identifiably New York. Before halal carts or dollar slices, the dense potato-filled pastry smothered in mustard was the snack of real New Yorkers in a rush and on a budget.

The proletariat potato turnover became a political hot potato when Nelson Rockefeller, one of the nation’s richest men, ran for governor. In 1962, the Democrats distributed a cartoon poking fun at the phoniness of a Rockefeller trying to play off like a regular knish-eating New Yorker. Rockefeller still beat out the Democrat Robert Morgenthau, a Jew. How? McNickle recalls that after the election, “he [Morgenthau] bumped into black civil rights activist Bayard Rustin standing on a street corner eating a knish. ‘What’s that you’re eating?’ Morgenthau asked. Rustin responded, ‘I’m eating the reason you’re not governor.’”

The elite Morgenthau had failed to connect with the average Jewish voter. Eight years later, in the 1970 Governor’s race, the savory pastry was again weaponized. Rockefeller’s opponent was Arthur J. Goldberg, the son of a street peddler. From a Brighton Beach knishery, he asked, “What does Rockefeller know from a knish?” In the end, Rockefeller won, proving himself by voraciously downing knishes, pizza, kielbasa, and egg rolls on the campaign trail. Four years later, The New York Times wrote approvingly of his 1974 nomination as Vice President: “He can work a crowd, eat a knish.” 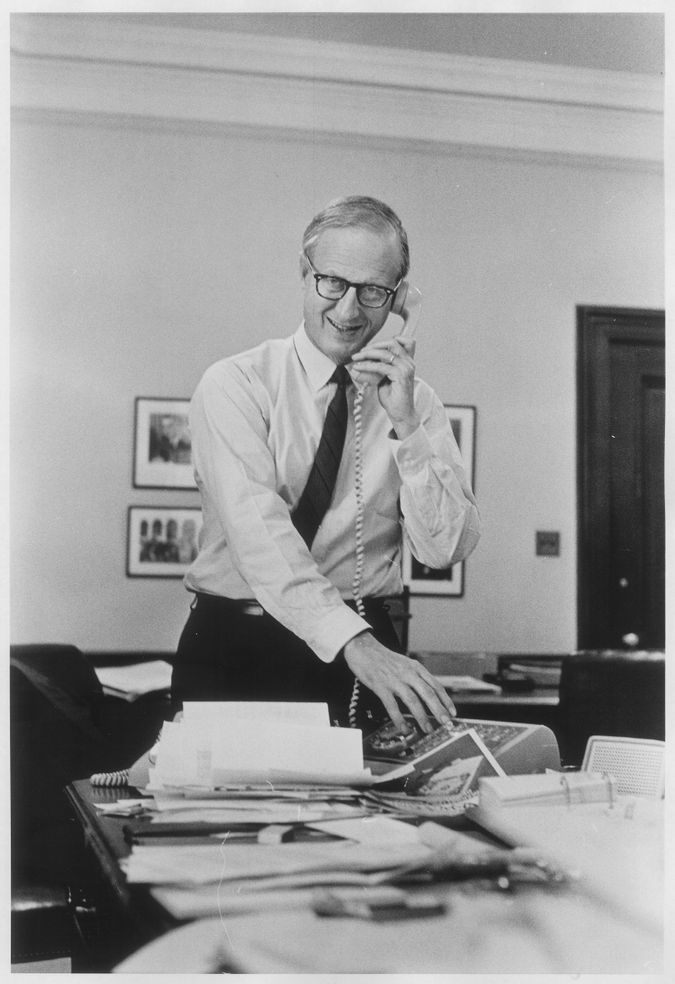 Foiled by a Knish: Robert Morganthau lost a 1962 gubernatorial election to Nelson Rockefeller. Was a knish to blame? By Getty Images

To be a “knish-eating politician” became a shorthand. It meant to be able to campaign in working-class ethnic neighborhoods of New York and not just the halls of a country club. Silver points to the 1980 novel “Close Relations,” by Susan Isaacs. In it, a campaigning governor described as “the ultimate WASP” chokes to death on a lowly knish at a Queens rally. The message, “their Beloved Non-Ethnic” couldn’t cut the mustard. Later in 1996, it was said of the Republican Vice Presidential candidate Jack Kemp, ”He’s not your hot-dog-eating, knish-munching street politician.” In other words, he may have represented upstate New York in Congress, but don’t expect him to pull in New York City voters.

By then, the potato pastry was in decline — done in by its biggest beneficiaries: New York politicians. In his war on street food, Mayor Giuliani, perhaps sick of potato pie eating on the campaign trail, effectively banned knishes from the smaller hot dog carts. Previous regulations from the Koch administration had already forced most vendors to switch from fresh to inferior frozen knishes. The knish, once almost on every corner, receded from public life. Newer street carts can handle knishes, but these days, it’s easier to find a Tibetan momo or taco at a midtown food vendor than the old reliable knish. 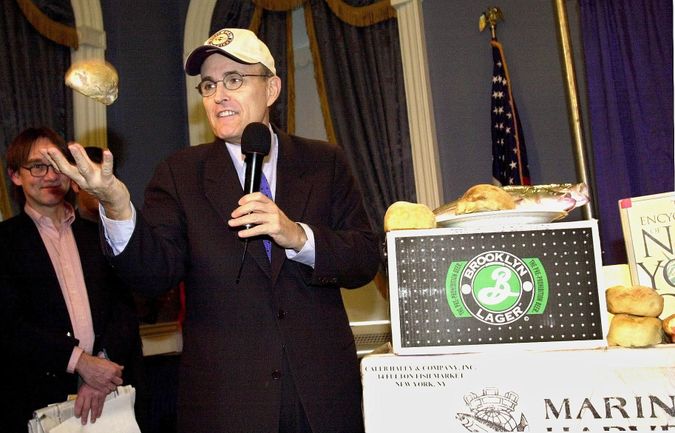 End of the Knish Line: Then-mayor Rudy Giuliani speaks in front of a display of knishes. But he helped usher in regulations that made the knish less ubiquitous. By gettyimages

It’s tempting to pin the knish’s downfall on the political class, but there are as many Jews as gentiles on line at the dosa cart and empanada trucks. A century ago, a knish was the lunch of striving Jewish garment workers. Silver compares it to the tamales of today’s Latino immigrants. As more Jews entered the middle class and moved out to the suburbs, the knish became more a food of comfort than a food of subsistence.

Nostalgia alone can’t keep the knish industry afloat. Knishes are still found in delis, the occasional street food cart, and in the religious Jewish strongholds of the outer-boroughs, but the pillowy stuffed pastry has become rarer and more expensive. No New York politician has taken on the cause of the dying sidewalk knish. They moved on to show their New York bona fides by expertly folding slices of pizza, not toasting a bagel, or visiting a bodega. But still, I must ask, “What do they know from a knish?”

Once the staple of New York politics, whatever became of the knish?