Life is finite, ‘Shtisel’ is eternal 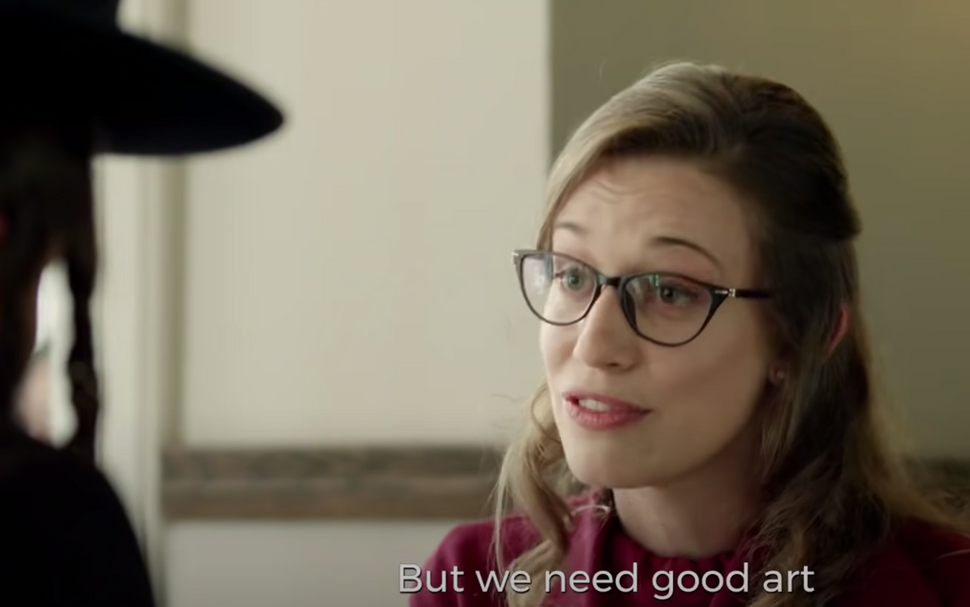 After a year of pandemic, when it often feels like time is standing still, the new season of “Shtisel” reminds us that life is always moving relentlessly forward. In fact, season 3 of the show suggests that it is art alone which can transcend time.

In the opening frame of the season, Akiva Shtisel’s paintbrush swirls on his palette, as he prepares to paint a portrait of his wife who gazes lovingly at him. A moment later, the insistent cry of their baby punctuates the stillness. He begs his wife not to move — art comes before life, he seems to say.

Later, during a flashback to their wedding night, when they enter their new apartment as husband and wife, Akiva won’t let her take off her wedding dress until he has a chance to capture her just as she is, in this exact moment.

She smiles indulgently.”Life is short,” she says.

“Life is endless,” he responds.

It turns out that he is both right and wrong. In the next shot, the frame of his luminously living bride is quickly replaced by his painting of her in her wedding gown. Now, it hangs in a gallery, along with countless others of her, but we soon find out that she has died mere months after it was painted. We are struck with an eerie sense that she is both tragically gone yet vividly present.

This dichotomy pervades the whole season. In a later episode, Yosa’le, Akiva’s young nephew, walks with his prospective bride through a museum and she tells him that her father is dying. She explains that she would gladly trade years of her own life if only he could live longer. With this awareness of time’s cruel limitations, they pause before an exhibit of butterflies, pinned under glass. Butterflies live only for a day, Yosa’le tells her, but here, in the museum, they are given “eternal life.” This is the gift of all art: It preserves the most fragile and fleeting beauties of this world forever.

Art is everywhere in this season of “Shtisel.” One character works at a classical music station where she plays centuries-old symphonies whose pathos can still move us. Meanwhile, in a glorious meta-twist, another character finds himself delivering food to a set that is filming a show about ultra-Orthodox life. He watches the secular actors and their fake beards with amusement, and we have to remind ourselves that he, too, is a secular actor with a fake beard, playing a character on a show.

Since the show’s first season, “Shtisel” has probed the question of where art ends and life begins. In one of the moving, climactic moments of Season #1, we discover that the matriarch of the Shtisel family has been saying tehilim (psalms of healing) for the long-suffering characters on her American soap operas. To her, these characters are as real as her own flesh-and-blood family members for whom she also prays.

The allure of art is strong not only because it vividly captures what is deep and true about life, but because it is not at the mercy of time. Life itself does not pause or wait — one must act with decisiveness or, in an instant, all can be lost. Such is the nature of life and time. But not art.

In the penultimate scene of the season, Akiva’s father, Shulem, quotes another artist, the iconic writer Isaac Bashevis Singer, who suggests that “the dead don’t go anywhere….Everyone is here all the time.” This is followed by a vivid conjuring, possible only through the medium of art. All those who have died — the wives and mothers, fathers and grandfathers — all the lost loved ones who the characters miss desperately, suddenly fill the frame, sitting down to the table as if for an ordinary meal, passing the challah and pickles, laughing and talking. Now the dead and living are side by side accorded an equal sense of reality. It is a magic trick only art can perform.

But this is not the end. The last frame is reserved for one final “portrait” of a woman. Throughout her dangerous pregnancy, Ruchami writes letters to her unborn daughter. Now, against all odds, she and her child both survive. There is a sort of awe in this moment, as each person standing around her is painfully aware of Ruchami’s mortality — the fragility of her existence and that of her child. She sits among them, beaming and crying, her baby in her arms.

At this moment, for the first time in the series, a character looks directly into the camera as if she knows that she is being captured on film. In doing so, she becomes exactly like one of Akiva Shtisel’s soulful portraits. As she looks intimately into the eyes of the viewer, inviting us to join her in this vulnerable, human moment, we realize that the entire series of “Shtisel” has managed the ultimate artistic feat of pinning butterflies under glass. It has captured life, real and vivid, poignant and complex, full of aching joy and sadness. Look, it says: this is life. It is short. It is endless.

Suzanne Socken has taught English and Drama for over 20 years in both Canada and the US. She is currently Co-Chair of the English Department at TanenbaumCHAT in Toronto.

Life is finite, ‘Shtisel’ is eternal