I am not claustrophobic. But watching “Shiva Baby,” 26-year-old Emma Seligman’s first feature film, I felt the walls closing in on me. Ariel Marx’s high-pitched and plunky soundtrack felt akin to the “Psycho” score’s shrieking violins and I could feel my cortisol rising throughout the entire runtime. While the film bills itself as a comedy, it feels more like a horror film.

This is perhaps because the movie is about horror — or perhaps more accurately, dread, of the existential variety. Danielle, the main character, is a senior at NYU, who is playing at being a sexually liberated adult in an attempt to stave off her anxiety about what will happen when she has to actually become one. 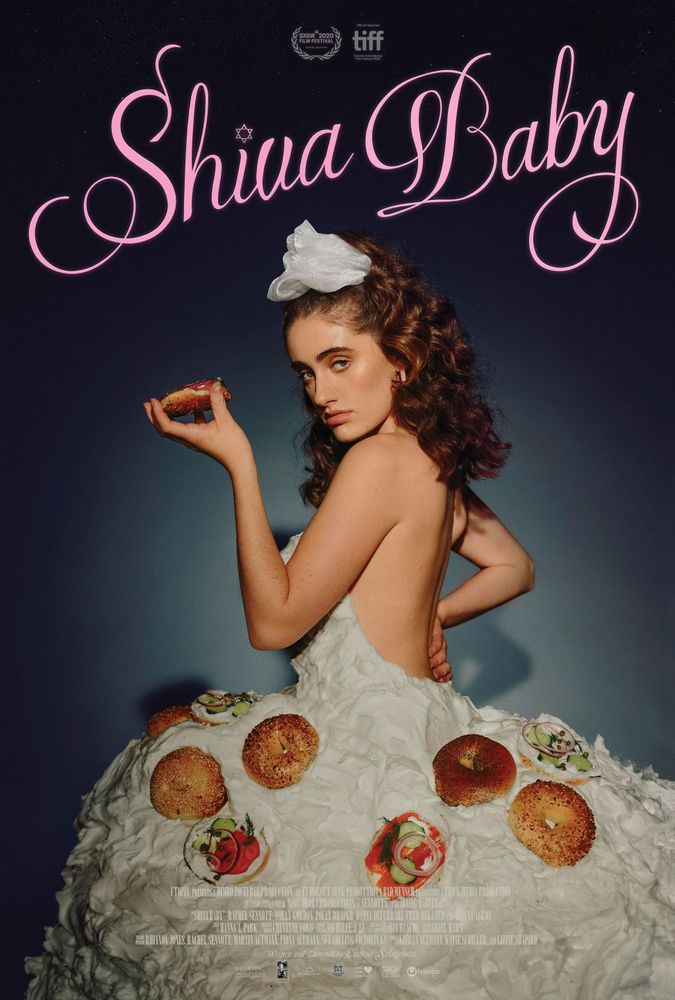 Aside from its opening scene, in which our heroine reaches a loud (and fake) orgasm in a Manhattan loft with her sugar daddy before awkwardly extracting payment from him, “Shiva Baby” takes place entirely at, well, a shiva. It follows Danielle, played by Rachel Sennott, who struggles to navigate a house full of family friends and neighbors and parents, all of whom want to know what she’s doing with her life. Max, sugar daddy, is there too.

Things only get worse. Danielle’s ex-girlfriend Maya is on the scene, and so is the sugar daddy’s “shiksa princess” wife and baby. Her dad, chuckling fondly, tells the assembled cast about Danielle’s “extended awkward phase.” Someone spills coffee on Danielle. It’s the embarrassment of every family gathering you’ve ever been to, on steroids.

“Shiva Baby” is an expanded version of an acclaimed short film by Seligman and Sennott, which focused on the flow of sexual power between Max, the sugar daddy, and Danielle who is increasingly infantilized by her family. The expanded version queers the power dynamic with the addition of Maya, as Danielle ricochets between her ex-girlfriend and Max. Seligman herself identifies as bisexual, and the film often feels like she is writing her own experience.

“I really just wrote down every single awkward moment I had and put it in this movie. So I guess it feels like a lot, because it’s a collection of years worth of comments,” Seligman told me when I spoke to her about the film. “It’s tough, because obviously I am playing with stereotypes, but I was just living with my parents for a year, and some of the stuff they did — I was like, if I wrote this in a movie, I’d be accused of stereotyping. You can’t make some things up.” While Sennott, who plays Danielle, comes from an Italian Catholic family, Seligman said the actor could relate just as well to the experience of overbearing family gatherings.

One of the notable aspects of the film is how it breaks away from the oft-used justifications for engaging in sex work, which usually hinge on money or desperation. Seligman based the character on NYU students she knew who dabbled in sugar daddy-baby relationships, often not out of need for money.

In other areas, however, the film leans on familiar stereotypes. Danielle is a liberal arts cliché — she’s a bisexual gender studies major, who has no job prospects or direction; her parents fund her every need yet she desperately wants to be edgy. Her mom and dad fit the overbearing Jewish parental stereotype, constantly fussing over their daughter’s looks and job prospects. The rest of the neurotic friends and neighbors repeat the same few questions ad nauseum: Are you seeing anybody? What do you want to do with your life? And, of course, constant comments on Danielle’s weight and looks.

As someone with multiple degrees in religious studies, I’ve gotten pretty similar questions (“That’s so, um, interesting. And what does one do with that?”). But I do wonder if Seligman could have complicated her presentation of Jewishness in the same way she queered the sexual dynamics, or added more depth to the neuroticism of the gathered relatives. It feels like a similarly cheap shot to make Danielle a gender studies major when any newly graduating college student is just as overwhelmed by the prospect of the adult world — even if they majored in chemistry and have a job.

Still, the caricatured nature of the film is part of what makes its absurdism work. The more the walls close in on Danielle, the more larger-than-life the people around her become, and each performance is pitch-perfect. As much as the film’s crescendoing cringe stressed me out, it is also why the movie succeeds at making Danielle’s own existential anxiety so tangible. The struggle of confronting adulthood is not a brand-new topic, but “Shiva Baby” makes it visceral in a new way — even if I’m not so sure I want to relive that.