Can music be educational and still be sexy? These rappers think so. 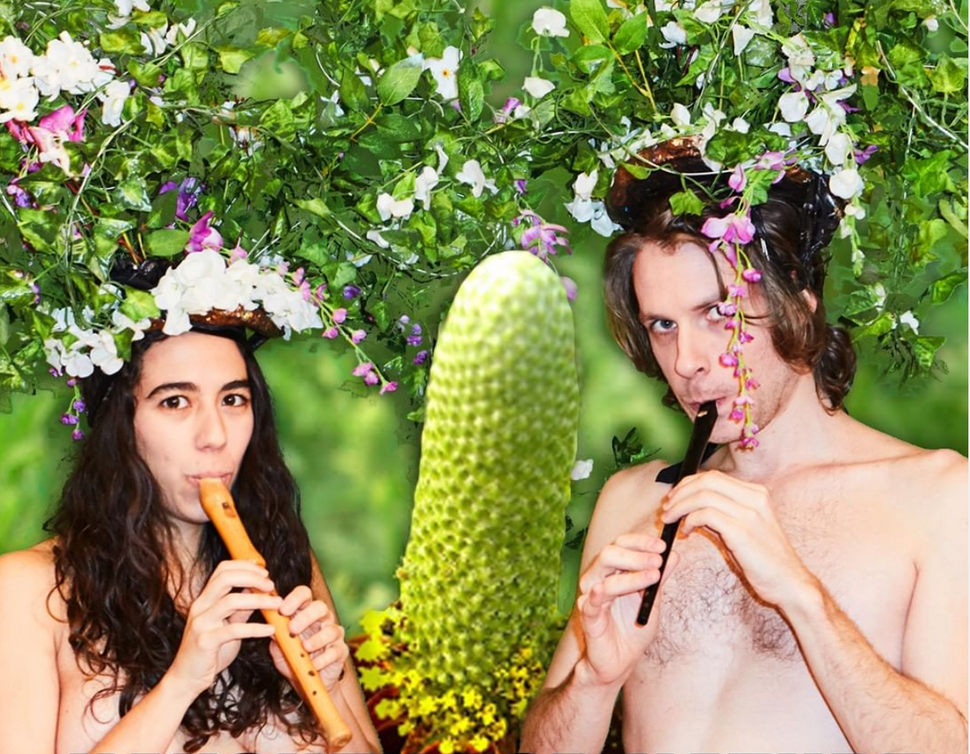 When you think of rap and hiphop, what probably springs to mind is the type of music that makes it into the Top 40 charts, with lyrics about love or sex or money. But the Brooklyn-based duo Nate and Hila are more likely to rap about compost or bees.

To be fair, their bee music is about sex as well — the somewhat psychedelic video, which has a rather NSFW title, features the pair in colorful, wonky bee costumes rapping about the life cycle of a hive. Their newest video, “Compost!” released this week, is about composting.

You may sense a theme. Nate and Hila’s music focuses on environmental issues, and it tends to have an educational bent. Their newly-released composting video is part documentary, detailing composting efforts around New York City, and half educational fun — dressed as a banana peel and apple core respectively, Nate and Hila sing about why food can’t decompose properly in landfills and how the resulting methane gas contributes to climate change.

Since they met performing at a salon — Hila under the moniker “Hila the Killa,” and Nate as “Sir Kn8” — the pair have performed their ecological raps around Brooklyn and had a “Naughty for Nature” event the House of Yes, a Brooklyn performance venue that leans toward the wacky and wild; pre-pandemic, they threw events ranging from daytime anti-racism trainings to BDSM nightclub events. (I first heard of Hila because of a House of Yes Hannukah party; sherapped dressed as a drag rabbi in front of a butt-plug menorah.) Now, they even feature in a video installation in the trendy art collective Meow Wolf’s new Las Vegas installation — though, because of the pandemic, the duo hasn’t even seen it.

When I spoke to them, Nate was driving in Kevin, their cozily decorated van — “the unsung hero of Nate & Hila,” they told me. He eventually got lost and pulled over so he could participate in the conversation more fully; Hila called in from the pair’s apartment. Our conversation, lightly edited and condensed, is below.

Tell me about your new video that’s coming out, what was it like making it during the pandemic?

Hila: It’s a big compost anthem. It actually features another rapper, a master composter in the Bronx — her name is DiorNoel. We made this sort of documentary video highlighting 13 different community compost sites in New York City.

I don’t know if you know this, but New York City defunded the compost program, which was one of the largest in the country. New York used to have brown bins and something like $26 million allocated for composting that was distributed toward GrowNYC and different organizations. All of that was discontinued at the beginning of the pandemic, so it’s been a year of no help from the city. But that hasn’t stopped people.

So we documented some of those sites and highlighted some of the people. We hope that it will make an impact on people, especially New Yorkers who can see that there’s eco-friendly options in all five boroughs.

So how do you guys hope that people will engage with these educational or issue-oriented songs? Do you hope that they can become dance anthems or earworms, or are they more teaching-oriented?

Nate: I would say that it’s both. Of course any time you can get someone to dance to your music, it’s a good thing. Striking a balance is what we want to do — have the songs fully live as art on their own terms, and also have this educational dimension.

I feel like, the farther back you go in the history of poetry in different civilizations, the more you find that teaching or telling a really important story that’s important to the story, or teaching a lesson, is part of the foundation of the poetic act. To dance to a song, it doesn’t have to be about shaking your booty or falling in love.

Speaking of shaking your booty, you guys were very performance oriented before the pandemic. How have you adapted to this new reality?

Hila: We have had a couple performances outdoors last summer, and now we have a bunch lined up for April at different Earth Day things. Last Saturday, we went busking for the first time in over a year. We were at McCarren Park, and set up right next to the compost dropoff site, so we were Banana Peel and Apple Core rapping while people were dropping off their compost. That was really cool and we’ll definitely do it again.

Once we realized there’d be no more live shows, we pivoted and started putting out lots of content online and making videos. And we started getting jobs of that nature, so we were very fortunate to have people hire us to make custom songs and videos for them. It made us so much better at video editing and animation, and now we have those extra skills. So, silver lining.

How do you guys find that your individual interests and styles line up? What’s the writing process like?

Nate: When we first met, our way of mythologizing it is that it was a coming together of heart and head. Hila’s the heart and I’m the head. A lot of the energy and the inspiration just strikes Hila from the beyond, and she has a really good instinct for what’s important.

My training is in philosophy and stuff like that, a more academic context, so that’s kind of how I interpret things. Environmental philosophy in the capital P sense is where some of my research background is. But they inform one another, and it’s a good balance when it’s working.

Hila: I have a lot of ideas, I come up with “Oh we need to do a song about this. And then we explore it together. I think Nate is really good about bringing in different parts of that same topic to complicate and make more nuance. I love that we can really go into it, super nerdy. You’re going to get a lot of information from it if you listen to it over and over.

Nate: I like that we’re answering this question in the form of compliments. We should make that a practice for interviews.

You guys also do a lot of freestyling, right? To me, that’s always seemed nearly impossible — how did you guys learn to do that? Have you been able to find an outlet for that without a live audience?

Hila: When we met, we were booked as separate acts on the same show. At that time, I was doing really specific comedy rap, I had three songs and I did not freestyle, I tried doing it for the first time with Nate and I just felt so embarrassed. I was like “I’m so bad at this.”

But it’s like any muscle, if you’re working out, if you practice it a lot, you get better and better. If you listen to a lot of hip hop, you start remembering what different words rhyme with what other words, and they just pop into your head at the right moment.

Nate: We’ve still found outlets to do it. We’ve done some Zoom shows with freestyling, and it’s actually kind of fun to freestyle on Zoom because people can put stuff in the comments, they put prompts.

Can you talk about your individual practices?

Hila: I am focusing on building a family-friendly, all-ages green education persona. I’ve been building this “Greening with Hila” show.

Because I grew up here, I feel like I really want to give something to my childhood self that grew up in the city and did not have any awareness about how food is grown, or what the plant of my vegetable looks like or where my water comes from, or the most basic things that keep me alive.

Nate: I’ve been promoting and trying to work on this Youtube channel of mine called Nathanology, and I basically want to make the most philosophical raps in the world. Literally, asking my followers “Hey what should I make a song about” and then making it, so that the examined life can rhyme, and any topic of the most abstruse nature can be turned into a funny and engaging and insightful jam.

Why use music to do these things?

Nate: I think I would mostly reiterate what I said earlier about the Bardic tradition. Even speaking about Judaism and the Torah, that was an oral tradition — what we have now is just the record of that oral tradition. If you want stories to be passed down, putting them into poetry and music makes them really part of the fabric of culture.

Rhymes also just help people remember things. You know, just the other day I was having a conversation about environmental policy with someone and I found myself going through the words to one of our songs like, “Oh right, yes, that’s when that happened.”

Hila: Yeah, I think I picked up this habit at Burning Man, you know, bringing my own cup and so now I bring my own cup to coffee shops and stuff and I just find myself in my head going “Bringin’ a cup, bringin’ a cup,” and that’s one of our songs — I’m like “I’m doing that!”

I feel I’d be remiss if I didn’t ask about your drag rabbi character that you performed at the House of Yes.

Hila: I’ve sort of retired my drag rabbi character, for multiple reasons, but he had many incarnations, including Rabbi Eco-lijah. His purpose at that point was connecting Jews to environmental awareness. But I feel like it’s more powerful if it’s just me. I don’t have to dress up and appropriate Hasidic culture in order to get my point across.

Can music be educational and still be sexy? These rappers think so.