Meet the real-life artist behind the paintings in ‘Shtisel’ 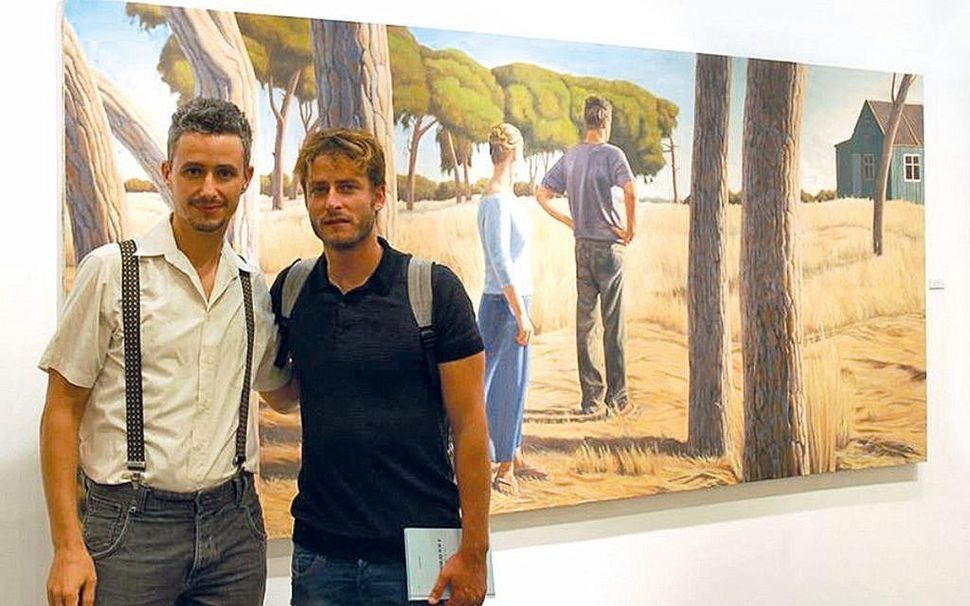 Alex Tubis and Michael Aloni in front of one of Tubis’s other paintings. Courtesy of Alex Tubis

Akiva Shtisel, the protagonist of the eponymous series, is a genius artist, and his gorgeous paintings lie at the heart of the show about Haredi life. In the most recent season, his paintings of his deceased wife hold much of the emotional weight of the show, symbolizing Akiva’s grief and his struggle to develop a new relationship and move on.

But Alex Tubis, the real artist behind the genius paintings, had never heard of “Shtisel” when he was brought on for its second season, even though the series had already won wide acclaim in Israel for its first season. When the show’s art director reached out to the Russian-born painter, who now lives in Nes Ziona, south of Tel Aviv, the artist asked whether the gig would be paid — he thought it was a student production. 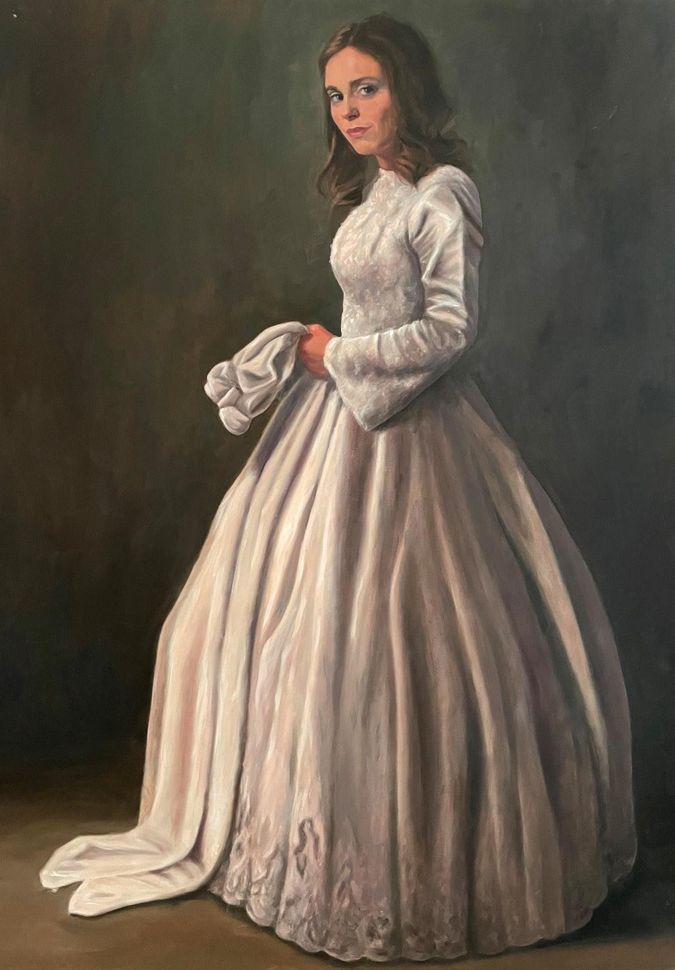 The portrait of Libby, Akiva’s wife in “Shtisel.” By Alex Tubis

Tubis seems about as different from the show’s Haredi protagonist as he can be. When we spoke by Zoom, he wore a blue t-shirt and his unruly hair was uncovered, the opposite of Akiva’s black hat and peyot. Yet the two have a surprising amount in common: Both faced judgment as artists within their communities, and neither is particularly concerned with commercial success — Tubis has only painted commissions two or three times before.

I spoke with Tubis about how he was hired, what it was like working for the show, and what he does when he’s not making art for “Shtisel.”

Tubis doesn’t consider himself a well-known artist, and was somewhat bemused to be called in to work on “Shtisel.” When he came in to interview with the show’s creative team, he brought examples of work from other artists with a more contemporary style that he could imitate. “I thought that my style is not very interesting,” he said. But Dikla Barklai, the series’ producer, told Tubis they wanted the real him, the classic style they’d seen at his exhibitions.

How the process works:

Tubis is not the only artist who has worked on “Shtisel” — Menahem Halberstadt, an illustrator and draftsman, did the charcoal sketches in the first season, as well as a pivotal portrait of Nuchem, Akiva’s uncle, in season three. But as Akiva progressed to oil painting, Tubis became the main artist in recent seasons.

The writers give Tubis guidance, pointing him to other artwork they found inspiring — for example, for season two’s portrait of a boy with a goldfish, the writers pointed him to Eduoard Manet’s “The Fifer” for inspiration — and explaining the emotions they want the piece to convey. Tubis then presents a few drafts and sketches before starting work on the full painting. It’s a crunch; this season, he ended up with only a month to complete the three large oil paintings that were central to the plot.

Does he read the scripts before he paints?

Despite his pivotal role, Tubis refuses to read the script to understand what role his art plays in the plot. The reason? He’s a fan of the show too, and wants to enjoy it fully when it airs. “I want to have as few spoilers as possible,” he said.

His relationship with Michael Aloni, who plays Akiva:

Though close-up scenes of Akiva painting show Tubis’s hands, not Aloni’s, the actor did visit the artist’s studio for lessons on the basics. The artist was impressed at how well the actor picked up techniques, and believes Aloni could seriously pursue painting if he wanted. The two got along well, quickly opening up about their personal lives when they met before season three.

On whether he relates to Akiva:

Tubis moved to Israel from Russia in 1990 with his family, at age 12. Like Akiva, he said he has felt pressure to pursue something more widely respected and profitable.

“I’m not the only Russian-Israeli who has chosen to make art, but most of my friends from the army, who were all Russian-Israelis, I think pretty much all of them are working in hi-tech now, and my brother works in hi-tech as well, and also his wife,” he said. “It’s not religion, but it’s a belief that you should choose something more practical, and that painting is shtuyes, it’s stupid. Like Akiva’s father tells him, ‘When will you be over with this?’”

How being on the show has changed his life: 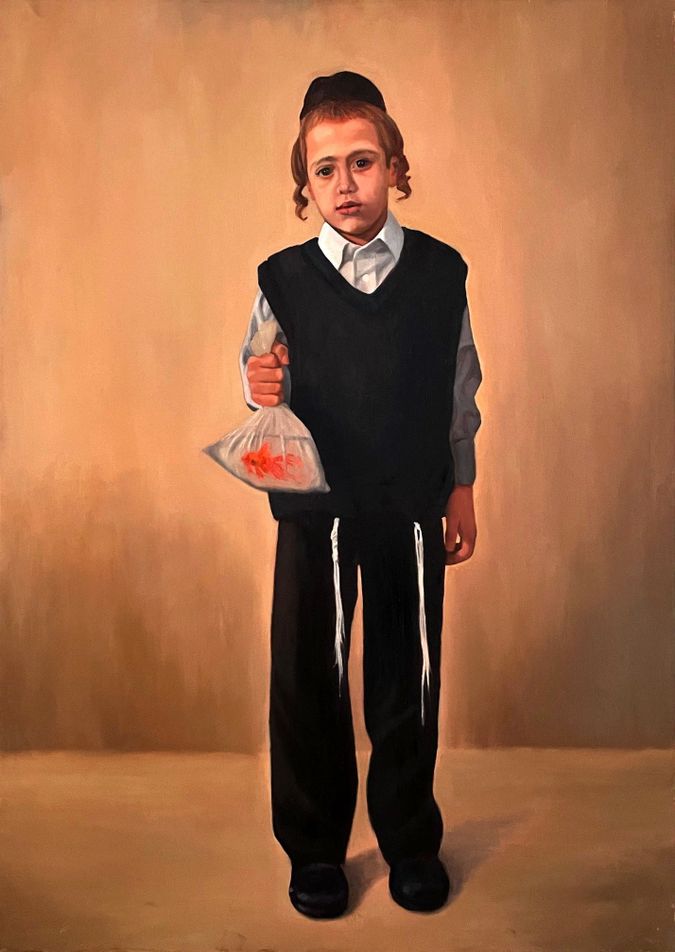 The boy and goldfish from season two of “Shtisel.” By Alex Tubis

While Halberstadt’s portrait of Nuchem from the most recent season already features prominently on his website, Tubis has yet to add his artwork from any of the seasons to his website. He only managed to post the pieces to Facebook within the last month. “I don’t know why, really,” he said.

Since he finally posted the iconic paintings under his own name, he has gotten a great response. But, though he has great confidence in the quality of his work — “Maybe too much,” he said — he is ambivalent about the praise and attention he has gotten on social media as a result of the show.

Though the paintings from the show belong to the studio — the painting of a boy with a goldfish from season two hangs in producer Dikla Barkai’s office — Tubis recently sold another one of his paintings, to a buyer in New York, and expects more sales to come.

What he does when he’s not painting for the show:

In addition to his own artwork, Tubis teaches painting at the Bezalel Academy of Art in Jerusalem, the country’s top art school, which he also attended.

When Bezalel opened up a Haredi program, soon after the second season of “Shtisel aired,” Tubis ended up with another connection to the Haredi world — his teaching. The new Bezalel program is on a different campus, where there are religious classes in the mornings and a few limitations on subject material — no nude models or Christian symbols — but otherwise, the course of study is the same, with the same teachers as the main campus.

In some ways, he finds his Haredi students’ lives unimaginable — one student recently Zoomed into class with her newborn baby. But in others, Tubis is surprised how relatable they are. After Eurovision one year, the girls in his classes were gossiping about how the Cyprian singer looked like Beyonce — despite the music contest’s scandalous costumes.

He hopes “Shtisel” can help other Israelis come to the same understanding. “It really brings magic,” he said. “I think it’s beautiful.”

Meet the real-life artist behind the paintings in ‘Shtisel’