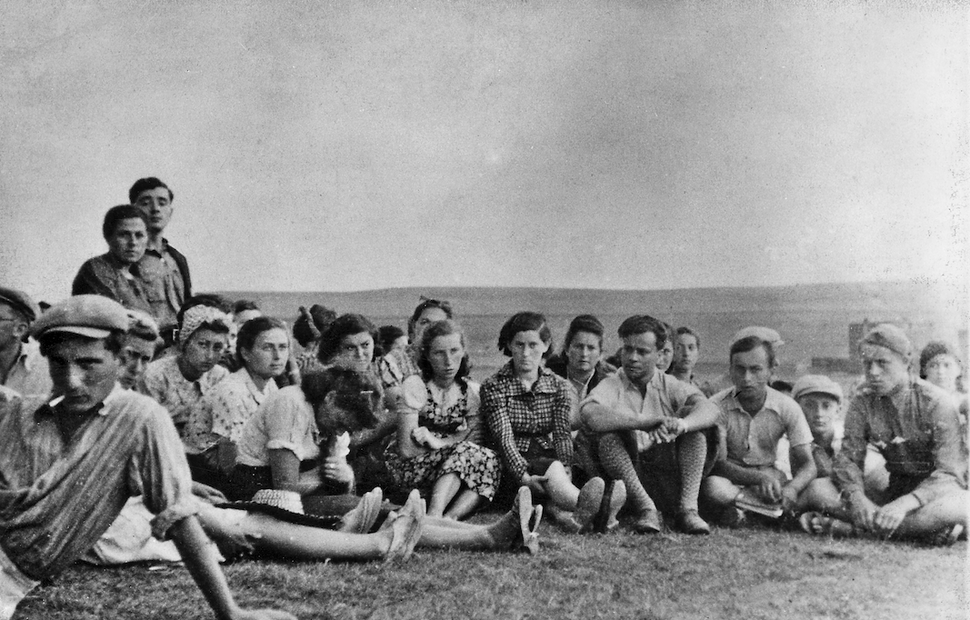 A meeting of Zionist youth at the agricultural training farm in Będzin during the war. Image by Courtesy of Ghetto Fighters' House Museum

Before the war, many resistors had been members of Polish-Jewish youth groups. These movements which had promoted collectivism, socialism, intellectualism, and peace transformed into underground militias in the ghettos. Members had to grapple with the age-old question: fight or flight? And if fight, how? For whom? Why? What was the point in a few Jewish kids attacking the most powerful army on earth?

In February 1943 the ghetto was gripped by cold, the air heavy as lead. The bustling commune building was unusually quiet. The old buzz of Freedom’s cultural programs—language courses, musical performances, seminars on the connection between the heart and the land—had vanished. No voices, no songs.

Renia Kukielka, an eighteen-year-old Jewish woman and an emerging warrior of the underground resistance movement, came up from the laundry room. She made her way to the meeting being held around the large table on the ground floor of the headquarters where their most important planning took place. It was a familiar spot.

Everyone gasped. These were golden tickets—out of Poland, to survival.

Frumka Płotnicka with her dark eyes and furrowed brow, stood at one end of the table. From a poor, religious family in Pinsk, Frumka had joined the movement as an introverted teenager and, given her inborn seriousness and analytic thinking, rose in its ranks. With the onset of war, she quickly became a leader in the underground.

Hershel Springer, her coleader of the Będzin “troop,” was at the other end of the table. Beloved by all, Hershel had “so much Jewish folk character in him” that he made frank conversation with anyone with shared roots, from a wagon driver to a butcher, dwelling in their most trivial matters. As always, his warm, goofy smile was a soothing force countering the destruction outside; the filthy ghetto that grew emptier each day, the echo of nothing.

Renia took her spot in between them at the table, along with the rest of the young Jews.

She often caught herself staggered in disbelief, jolted by her reality. In only a few years, she’d gone from being a fifteen-year-old girl with six siblings and loving parents, to an orphan, not even aware of how many of her brothers and sisters were still alive or where they might be. With her family, Renia had run though fields covered in corpses. Later, she’d fled through fields completely on her own. Just months earlier, she’d bolted from a moving train and disguised herself as a Polish peasant girl, taking up the post of housemaid for a part-German family. She’d insisted on going to church with them as a cover, but the first time, she shook with every movement, fearful she wouldn’t know when to stand, how to sit, what to cross. The teenager had become an actress, constantly performing. The head of the household liked her and commended her for being clean, industrious, even educated. “Of course,” Renia had semi-lied. 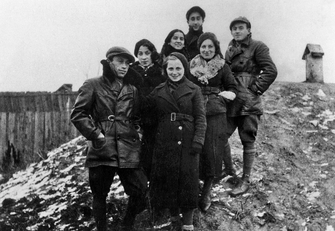 Comrades from the pioneer training commune in Bialystock, 1938. Frumka Plotnicka is standing second from the right. Image by Courtesy of the Ghetto Fighters' House Museum Photo Archive

“I’m from a cultured family. We were rich. Only when my parents died did I have to take on manual work.”

She was treated well, but as soon as she was able to secretly contact her sister Sarah, Renia knew she had to be with her, with what was left of her family. Sarah had arranged for Renia to be smuggled to Będzin, to this center for the Freedom youth group to which she’d belonged.

Renia was now an educated girl who did laundry, hidden in the back. She was an illegal here, an interloper among the interlopers. The Nazis had divided conquered Poland into distinct territories. Renia had papers only for the General Government, the area that was to serve as a “racial dumping ground,” with an endless supply of slave labor—and ultimately, as a site for the mass extermination of European Jewry. She did not have papers to be in Zaglembie, an area annexed by the Third Reich.

Now, to Renia’s right, sat Frumka’s sister and polaropposite, Hantze, her exuberant spirit and relentless optimism lighting the dark room. Hantze loved to tell the comrades how she tricked the Nazis by dressing as a Catholic woman, parading right in front of them, fooling them time and again. Sarah, her face chiseled with sharp cheekbones and dark, penetrating eyes, was present, along with Hershel’s girlfriend, Aliza Zitenfeld, who with Sarah cared for the ghetto’s orphaned children. Fresh-faced Chajka Klinger, an outspoken, feisty leader of a sister group, may also have been at the table, ready to fight for her ideals: truth, action, dignity.

“We’ve obtained a few papers,” Hershel repeated. Each one allowed a person entry into an internment camp; allowed one per- son to live. They were fake passports from allied countries where Germans were being held captive. The holders of these allied passports were to be kept by the Nazis in special camps and were intended to be exchanged for Germans in those countries—one of numerous passport schemes that they’d heard of in the past years. Perhaps, they hoped, this one was legit. It took months to organize and obtain these documents, a hugely expensive and dangerous process that involved sending secretly coded letters with photos to specialist counterfeiters. Who would get one?

Or should no one take them? Defense or rescue? Fight or flight? 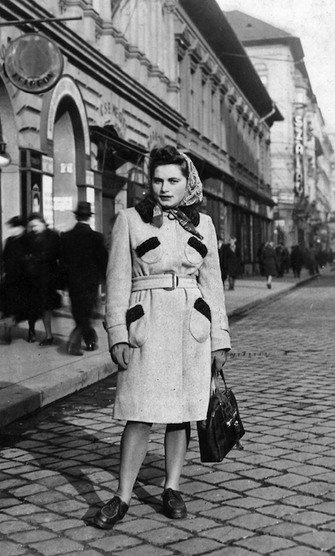 Renia Kulkiełka in Budapest, 1944. Image by Courtesy of Merav Waldman

This was a debate they’d been waging since earlier in the war. A few Jews with even fewer guns were not going to topple the Nazis, so what was the point of resistance? Were they fighting to die with dignity, for revenge, for a legacy of honor for future generations? Or were they fighting to inflict damage, to rescue and save—and if so, whom? Individuals or the movement? Children or adults? Artists or leaders? Should Jews fight in ghettos or forests? As Jews or with Poles?

Now a real decision had to be made.

“Frumka!” Hershel called from across the table, staring right into her dark eyes.

She looked back at him, just as firmly, though keeping quiet.

Hershel explained that a directive had come in from their revered leader in Warsaw, Zivia Lubetkin. Frumka was to use a passport to leave Poland for The Hague, home to the UN’s Inter-national Court of Justice. She was to represent the Jewish people, tell the world what was happening. She would then travel to Palestine and serve as an official witness of Nazi atrocities.

Renia looked at Frumka, her heart racing. She could sense Frumka reeling too, almost see her sharp mind at work beneath her quiet face. Frumka was their leader, the rock supporting them all, both the men and the women. Who would be asked to go with her? What they would be without her?

“No,” Frumka declared in her firm but gentle way. “If we must die, let us all die together. But”—and here she paused—“let us strive for a heroic death.”

Hearing her words, her assurance, the whole room sighed au- dibly. As if the entire building had been resuscitated, the members began tapping feet, some actually smiling. Frumka placed her fist on the table, as simple and quick as a gavel. “It’s time. It’s time to get energized.”

And that’s how they had their unanimous answer: defense. Renia, always ready, sprang from her seat.

Judy Batalion is the author of White Walls: A Memoir About Motherhood, Daughterhood and the Mess in Between. Her essays have appeared in the New York Times, the Washington Post, the Forward, Vogue, and many other publications. Judy has a BA in the History of Science from Harvard, and a PhD in the History of Art from the Courtauld Institute, University of London, and has worked as a museum curator and university lecturer. Born in Montreal, where she grew up speaking English, French, Hebrew, and Yiddish, she now lives in New York with her husband and three children.