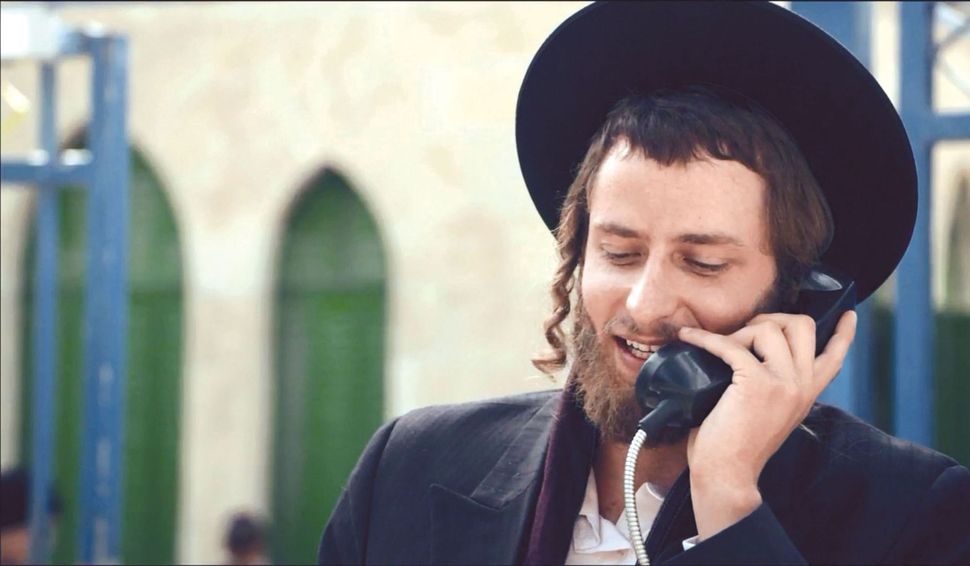 We look to spiritual leaders to guide us through challenging moments and inspire us, but where do they turn to for their own source of inspiration? Streaming services.

“This past year has been hard in new ways, and when you live at your job and your job is often to help other people make it through the difficulties of life, I rely on TV and pop culture to entertain me and allow me to sit and consume without effort,” said Rabbi Jillian Cameron of Los Angeles LGBTQ synagogue Beth Chayim Chadashim.

“Judaism is engaged in telling the greatest story of all time, the story of the human spirit and our relationship to ourselves, others and God,” said Rabbi Joseph Shamash, a 12-year veteran of the TV and film industry who now serves as spiritual counselor and manager of Beit T’Shuvah’s Elaine Breslow Institute in Los Angeles. “Hollywood sometimes does a better job of retelling these stories than our religious leaders, myself included. We can typically relate to characters in TV or film and see a part of ourselves in the story or the hero’s journey,” he said.

Of the 11 Jewish clergy members (Conservative, Reform & Kohenet) surveyed for this article, all had Netflix and Amazon Prime Video; ten had Disney+; nine had HBO Max; eight had Hulu; six Apple TV +; and Peacock, Paramount +, Starz and ChaiFlicks (all submitted as part of the “other” category), all ranked with one each.

A survey of 11 Jewish spiritual leaders about their streaming service preferences. Image by The Forward

The most mentioned series across the survey was the Israeli Haredi family drama “Shtisel.”

“Shtisel might be the most outright Jewish content, but that lifestyle seems so foreign to me that it’s not relatable,” said Rabbi Jason Miller, of MitzvahRabbi.com in Detroit. “I watch it more as an outsider looking in out of curiosity. Truthfully, watching ‘SNL’ or Seinfeld’s ‘Comedians in Cars Getting Coffee’ feels more Jewish at times.”

The show’s “insider look into a faction of our religion often spoken about as if they are aliens is really interesting,” said Cantor Lizzie Weiss of Temple Emanuel of Beverly Hills, CA. “I think the writers/directors did a fantastic job of giving these characters real problems. It doesn’t stray from the everyday real life obstacles that we all experience,” she said. Weiss added that the characters are constantly on her mind. “It is hard to get out of the ‘Shtisel’ fog. I want to know more.”

“It is hard to get out of the ‘Shtisel’ fog. I want to know more.” – Cantor Lizzie Weiss

“I love turning off the translations and practicing my Hebrew,” Rabbi Sherre Hirsch, Chief Innovation Officer at American Jewish University, said of “Shtisel.” “It makes me feel like it is time well spent.”

Rabbi Susan Goldberg, founder of L.A. spiritual community Nefesh said she watched the sitcom “The Good Place” – which imagines the afterlife and examines moral behavior through a philosophy lens – with her teen kids, one of whom even did some philosophy reading as a result.

“I think every clergy person and philosophy professor loves this one,” said Goldberg. “Such great conversations about ethics and death and dying.”

Rabbi David Wise, of Hollis Hills Bayside Jewish Center in Queens, NY, said he’s used pop culture content in sermons: citing a scene from “Madam Secretary” in a High Holy Days sermon and using “Kim’s Convenience,” a Netflix series about a Korean-American family, to highlight the similarities between Korean and Jewish immigrant narratives in response to anti-Asian attacks in the US.

Cameron said she opened a sermon with a recap of an old “West Wing” episode: “Lifelong goal achieved,” she said.

Of true crime and ‘Tiger King’ 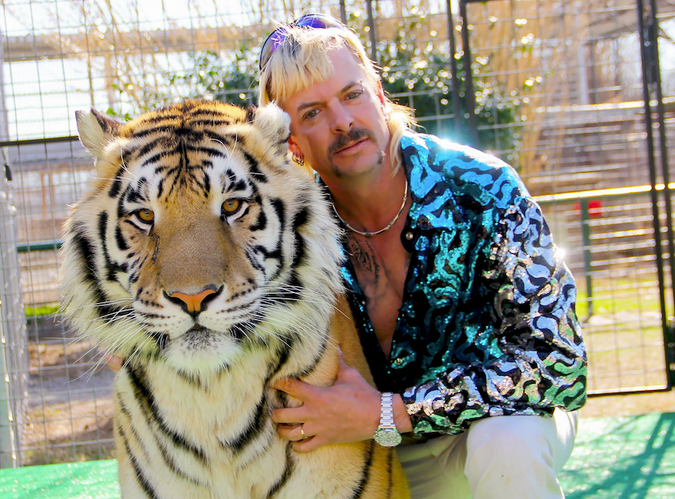 Zookeeper Joe Exotic is the focus of the ‘Tiger King’ docuseries. Courtesy of Netflix

True crime documentaries and series were also a draw.

“I appreciate the escapism and relief of other people problem-solving on a high-stakes level,” said Rabbi Hilary Chorny, Cantor of Temple Beth Am in Los Angeles, whose favorites included “I’ll Be Gone in the Dark” and “Murder on Middle Beach.” She added that TV has provided “a reminder of the craft of storytelling alive and well amidst awfulness.”

Cameron said crime documentaries, especially the ones about Scientology and the NXIVM cult, teach her more about “both the best and worst of humanity.”

“It is so easy to abuse your power as a religious leader, whether purposely or because of ego or thoughtlessness,” Cameron said. “We have the ability to help, comfort, teach, inspire people and our communities and we also have the ability to manipulate and harm them. We are given an enormous amount of trust and I think about the privilege and deep responsibility of that trust, about the choices I make and why and the balance I am trying to achieve in new ways after watching the profoundly harmful results of cults.”

Early-pandemic Netflix offering “Tiger King” became a national sensation for its story of murder and exotic animal exploitation. For Miller, who blogs about Jewish content in pop culture, it raised questions about ‘tza’ar ba’alei chayyim,’ the Jewish guidelines for ethical animal treatment.

“Were these entrepreneurs who deserved to make a buck by running tiger zoos or were they being cruel and abusive to living creatures?” he asked. “How is their tourist destination different than the local zoos we visit and support?” 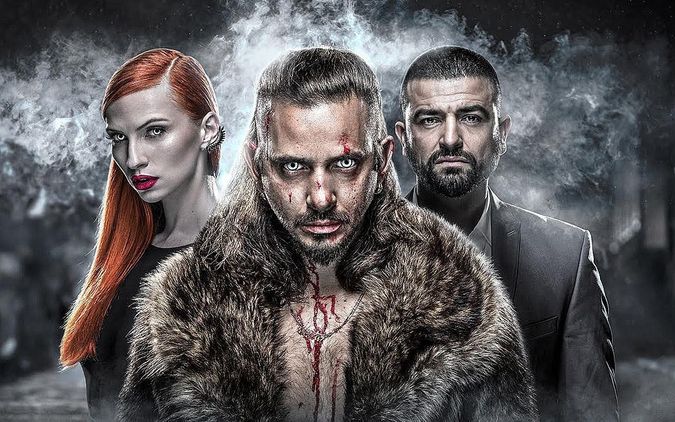 (From left) Anastasia Fein as Tania, Tzion Baruch as Juda and Amos Tamam as Asher in ‘Juda,’ the Israeli vampire TV show. Courtesy of Banijay Rights

Rabbi Jesse Olitzky, of Congregation Beth El in South Orange, NJ, said he loves Marvel- and superhero-related content for how it enables him “to disconnect with the real world into a world of make believe.”

“‘WandaVision’ dealt with grief, at a time during this pandemic when so many have dealt with loss, and ‘The Falcon and the Winter Soldier’ deals with the racial injustices of this country. Following the murder of George Floyd and the [rise of the] Black Lives Matter Movement, it’s important to address issues of injustice in every area of storytelling.”

Rabbi Sarah Bassin of Temple Emanuel in Beverly Hills said she is drawn to home renovation programs “because I secretly want to be a contractor instead of a rabbi,” and to late-night monologues from Stephen Colbert, Seth Meyers and Amber Ruffin because she “loves digesting news through a comedic lens.”

Kohenet Ketzirah Lesser, a teacher of the sacred arts and a corporate priestess ordained by the Kohenet Hebrew Priestess Institute, named Canadian sitcom “Letterkenny” as “funny and progressive,” Apple TV+’s “Ted Lasso” as “hopepunk in full effect,” and has been revisiting “Arrested Development” on Netflix “as a light way to end the day.” She also proclaimed NBC’s “Young Rock” as “funny with a message,” and named Israeli vampire show “Juda” as a favorite. “Jewish vampire show? Yes please,” she said.

Goldberg, whose leadership often centers on cross-cultural dialogue and social justice, said she found “I May Destroy You” – Michaela Coel’s critically acclaimed HBO series about a writer uncovering the details of her sexual assault – to be “a powerful show [about] memory and reality and trauma and healing and claiming your voice.” She called “Last Chance U,” “a great docu-series about young people trying to do big time sports in the community college system,” and recommended the HBO series “The Lady and the Dale.” “I have lots to say about that one: truth-telling and complexity and anti-trans bias,” said Goldberg, who was an adviser on the Amazon Prime series “Transparent.”

Cameron revisits police procedurals like “CSI,” “NCIS” and “Law and Order” for their relative moral certainty. “More often than not, the bad guys are caught and punished. And I pretend that if I weren’t a rabbi, I might have made a good detective.”

Weiss, who often talks about TV on her weekly “Think About It Thursdays” program, has been particularly interested in recent portrayals of Jewish doctors on “Chicago Med” and “Grey’s Anatomy.”

“No longer [are characters] the white, cis gender male Jewish doctor,” Weiss said. “These two doctors represent the variety of Jews of color, Jewish people with personality disorders, and Jews of varying sexuality that is more common today.”

“Just when you think that there really is nothing new under the sun – thanks, Ecclesiastes! – people surprise you and create amazing things,” said Cameron about today’s TV offerings. “I love to feel like I’m a small part of that just by watching them do it. Perhaps it is an odd way to find hope for the world and humanity – but I will certainly take it where I can get it.”