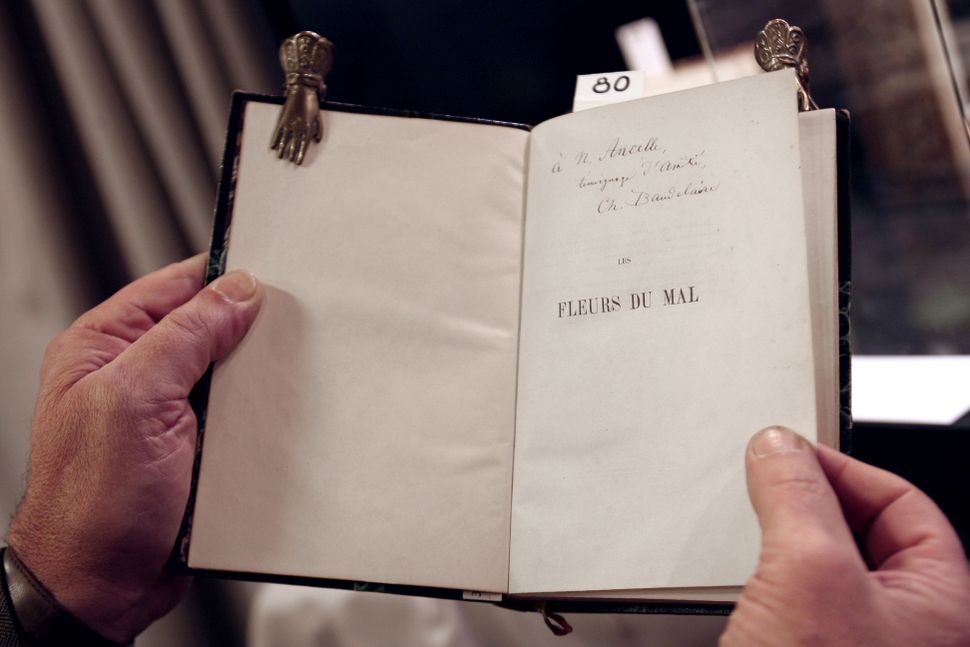 According to researcher Brett Bowles, Charles Baudelaire, who was born 200 years ago April 9, 1821, was a raging antisemite.

In an article from 2000, Bowles noted that in “My Heart Laid Bare” (Mon cœur mis à nu), a posthumously published book of fragmentary observations, the author of the collection “The Flowers of Evil” declared: “It would be fine to organize a plot to exterminate the Jewish Race.”

The French Jewish philosopher Jacques Derrida was outraged. Derrida scorned the rationalization of Claude Pichois, an authority on Baudelaire, that somehow this passage should not be interpreted as antisemitic.

Derrida observed: “Exterminate the Jewish Race. The idea, in any case, was not so new in Europe. Nor was it the sole property of Nazi Germany.” Derrida also cited disapprovingly the German Jewish critic Walter Benjamin, who was greatly inspired by Baudelaire’s writings about art, literature and modern urban life.

Like Claude Pichois, Benjamin was inclined to give Baudelaire a pass for his extermination comment, dismissing it as merely a “prank” or “vulgar humor (gauloiserie).”

These experts were aware that Baudelaire, given to frenetic overstatements, also called for the annihilation of all Belgians, among others.

Yet biographers have pointed to the story that Baudelaire had a Jewish mistress named Sarah, nicknamed Squinty (Louchette). After their relationship broke up, he wrote some aggrieved poems and letters, mostly not intended for publication, about Jews, some of them his personal acquaintances.

The critic Mario Praz observed that the lovely squint-eyed woman is a poetic convention in Italian literature, known as la bella guercia. Yet Baudelaire’s Jewish “Squinty” may have really existed, and in his early poem “My Mistress Is Not an Illustrious Lion,” he defended her selling herself as a harlot, since as an aspiring poet, he “sells his thoughts.”

Biographers imply that Baudelaire may have borrowed money to help extricate Sarah/Squinty from prostitution. Yet after the relationship fizzled, the poet showed signs of being less tolerant toward Jews.

One target was his publisher Michel Lévy, who with his brother, Calmann, ran an influential enterprise that published most of the significant French authors of the late 1800s. Lévy’s list included Dumas, Balzac, Hugo, Sand, Flaubert, Stendhal, and Nerval.

Lévy paid authors slightly more than the going rates of the day, which did not prevent complaints from Flaubert, who scorned him as a “Yid who clings to his moolah.” (Un youtre qui ne lache pas ses piasters).

Yet the publishing historian Jean-Yves Mollier has shown that Lévy was fair with his writers, at least by the standards of his time.

Baudelaire disagreed, writing to his mother in March 1858 to describe his publisher as a “moronic (but very rich) Jew.” (un juif imbécile (mais tres riche).

Seven years later, Baudelaire penned a letter to complain to the critic Sainte-Beuve that Lévy had failed to send the former a review copy of his latest book, because “this publisher, who belongs to the race that crucified Our Lord, was naturally quite capable of economizing on the cost of a copy, to your loss.”

1867’s “Flowers of Evil” contains another poetic flashback to his relationship with Squinty, but with a new negative aura that is captured in its first line: “One night when I lay beside a frightful Jewish woman.” (Une nuit que j’étais près d’une affreuse Juive).

Instead of valuing Sarah/Squinty as in the previous poem, Baudelaire now decries her as “bought flesh.” In the same volume, another poem was eventually added, “The Seven Old Men” which describes, among grotesque street denizens of Paris, a Jewish man with a beard pointed like a sword, who hobbles along with a cane, making him akin to a “crippled quadruped or three-legged Jew.”

It has been observed that this unappealing character may be an allusion to the antisemitic legend of the Wandering Jew. This character supposedly taunted Jesus on the way to the Crucifixion and was cursed to walk the earth until the Second Coming.

Yet these references in the writings of Baudelaire did not discourage generations of Jewish readers and writers who considered him as a foundational influence for their own writing in Yiddish and Hebrew.

One such was the modernist Moyshe-Leyb Halpern (1886-1932). As the critic Julian Levinson has noted, Halpern, as an immigrant from Galicia, was a staff writer for the New York leftist daily Morgen Freiheit, which touted him as a “great working class poet.”

Following in the footsteps of the Yiddish literary historian Eliezer Greenberg, Levinson depicts Halpern as the “Yiddish Baudelaire,” in his powerfully poetic evocations of urban horrors.

One example is Halpern’s agitated account of riding the New York subway in a poem, “Watch Your Step,” which includes the Baudelaire-influenced lines: “Birds of gold and greed hurl by/ Flaming desire ignites in my blood” (Trogn zikh feygl fun gold un fun glut / tsindt zikh mir a bager in mayn blut).

In another poem, “In the Subway,” Halpern intensifies the drama by comparing IRT riders to slaves being whipped. As the German Jewish sociologist Georg Simmel suggested, Baudelaire’s evocation of street crowds as mechanistic forces find their natural expression in descriptions of the inhumanity of public transport.

Although Yiddish poets had access to Baudelaire translated into European languages early on, by the 1920s and 1930s, book-length translations into Yiddish by the poets Leib Naydos and Simkhe Shvarts were also available.

Even earlier, as Ziva Shamir of Tel-Aviv University has stressed, Baudelaire’s imagery of the poet as alienated urban wanderer had impacted modern Hebrew literature.

Some of these poets translated Baudelaire, and Eliyahu Meitus produced a complete “Flowers of Evil” in Hebrew.

Yet none were more marked by Baudelaire than the contemporary Hebrew poet Dory Manor, who has translated several volumes of the Frenchman’s verse in recent years.

Manor published his first translations into Hebrew from “The Flowers of Evil” at age 18, when he was doing military service in the IDF. He would eventually write a doctoral dissertation on versions of Baudelaire in Hebrew from 1890 to the present.

So overwhelming was the influence of Baudelaire on Manor that a fellow poet, Nathan Zach, slated Manor as “epigonic” (a second-rate imitator).

Yet such literary squabbles should not efface what Baudelaire’s works have represented to avant-garde Jewish creators, such as the choreographer Ida Rubinstein and Canadian poet Irving Layton

Most movingly, in a memoir about imprisonment in Buchenwald concentration camp, the anti-Nazi leftist Jorge Semprún, describes watching the sociologist Maurice Halbwachs die of inanition.

Not knowing the words to the Kaddish, the Spaniard Semprún recited a Baudelaire poem while Halbwachs smiled bemusedly.

This use of Baudelaire as Kaddish substitute symbolizes the overpowering embrace by Jewish writers of a poet, despite the scattered negative comments he left to posterity.