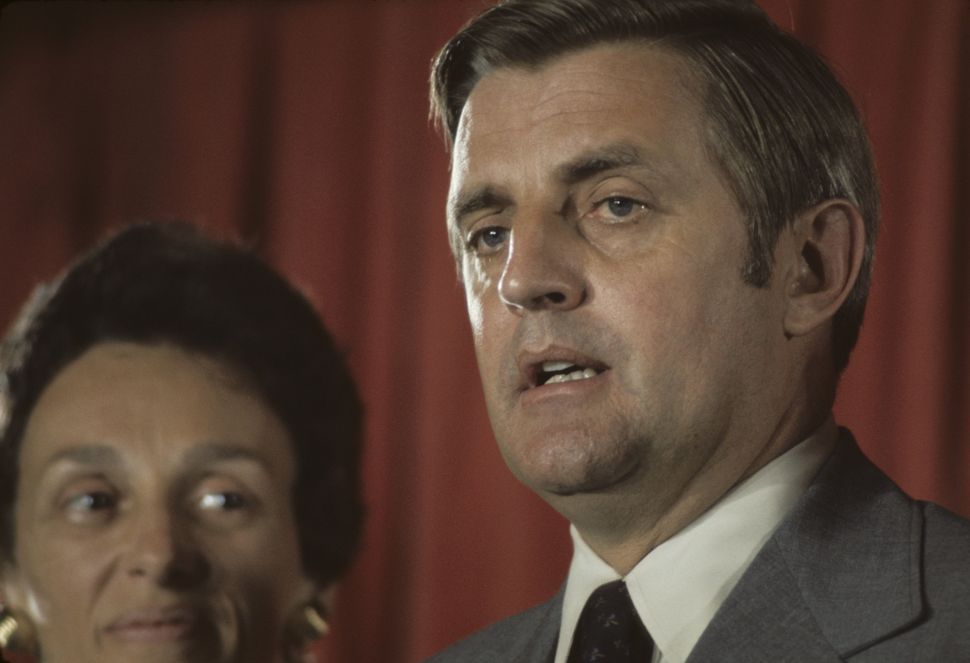 Walter Mondale, who died April 19 at age 93, was celebrated for his contributions to The Camp David Accords, political agreements signed by Israeli Prime Minister Menachem Begin and Egyptian President Anwar Sadat in 1978.

At the time, Mondale, previously a longtime senator from Minnesota, was serving as US vice president during the presidency of Jimmy Carter. Mondale’s rapport with Jews, which led to productive negotiations at Camp David, was also evident at other key points of his long political career.

Unlike Carter, who was primarily impressed with the faith-based arguments for international coexistence professed by Sadat, Mondale convinced Israel’s defense minister Ezer Weizman and Begin, by no means pushovers, with his record of sustained friendship for American Jews.

As the political scientist Steven Gillon wrote, Mondale’s “close ties with Jews in America and a deep appreciation for the Israeli perspective on the Middle East” were determinant.

These alliances developed in Minnesota alongside other politicians with progressive goals, including Hubert Humphrey and Eugene McCarthy.

Mondale, son of a Methodist minister who gave three sermons every Sunday in small towns near where the family lived, prized his friendships with local Jews.

These included Geri M. Joseph, a journalist and speechwriter for Hubert Humphrey during his 1948 campaign for US Senate. Joseph’s Russian Jewish family was originally named Makiesky. She continued in Democratic Party National Committee activities, where in 1964, she and Mondale voted to accept a mixed-race delegation from Mississippi to be seated at the Democratic National Convention.

Mondale shared an awareness of such issues as voting rights, still in jeopardy today, with his Jewish friends in Minnesota.

In 1978, in recognition of this bond, then-vice president Mondale asked Joseph to serve as U.S. Ambassador to the Netherlands at a time of political upheavals in Europe.

Although her husband Burton M. Joseph, then national chairman of the Anti-Defamation League, with whom she shared a Service to Israel award presented by Israeli Prime Minister Golda Meir, was unable to relocate to Amsterdam with her, she accepted the challenge.

Another enduring Jewish ally was Norman Sherman, longtime Humphrey aide and adviser and speechwriter to Mondale, who expressed surprise in a memoir that not all Minnesota liberals were devotees of Mondale’s pragmatic political style.

Mondale did not consider himself as left-wing as his own father had been during the New Deal era of FDR, and other politicians likewise found Mondale insufficiently liberal. Sherman observed that Eugene McCarthy “did not like Mondale and did not support him in any way when Mondale’s name was floated as a potential vice presidential candidate. Indeed, [McCarthy] disparagingly said of Mondale, ‘He has the soul of a vice president.’ I found that a bit of hypocrisy since [McCarthy] had so ardently sought that nomination in 1968.”

By contrast, Mondale’s mutually supportive and reliable affinities with Minnesotan Jews may have led to two of his eloquent, historically informed evocations of Jewish history.

One occurred when he intervened to save refugees from the Vietnam War in South East Asia and to offer them asylum, which resulted in Hmong Cambodians resettling in Minnesota and elsewhere in the country. In a July 1979 speech to the U.N. Conference on Indochinese Refugees in Geneva, Mondale reminded listeners that some four decades earlier, a different international meeting in Evian, France, had rebuffed Jewish refugees from Nazi Germany.

In so doing, Mondale concurred directly with Menachem Begin as the historian Jana Lipman has pointed out, although Begin’s own reflections on the Geneva conference were justifiably bitter and retrospective in tone: “As a Jew, I cannot forget the useless Conferences at Evian and Bermuda whose end results were the non-saving of even one Jewish child out of the one and a half million Jewish children who were dragged to a wanton death.”

By contrast, Mondale appeared to believe that it was worth appealing to U.N. members by alluding to the previous international failure to protect European Jews:

“If each nation at Evian had agreed on that day to take in 17,000 Jews at once, every Jew in the Reich could have been saved. As one American observer wrote, ‘It is heartbreaking to think of the desperate human beings … waiting in suspense for what happens at Evian. But the question they underline is not simply humanitarian … It is a test of civilization.’ At Evian, they began with high hopes. But they failed the test of civilization…Two nations said they had reached the saturation point for Jewish refugees. Four nations said they would accept experienced agricultural workers only. One would only accept immigrants who had been baptized. Three declared intellectuals and merchants to be undesirable new citizens. One nation feared that an influx of Jews would arouse antisemitic feelings. And one delegate said this: ‘As we have no real racial problem, we are not desirous of importing one.’ As the delegates left Evian, Hitler again goaded ‘the other world’ for ‘oozing sympathy for the poor, tormented people, but remaining hard and obdurate when it comes to helping them.’ Days later, the ‘final solution to the Jewish problem’ was conceived, and soon the night closed in. Let us not re-enact their error. Let us not be the heirs to their shame. To alleviate the tragedy in Southeast Asia, we all have a part to play. The United States is committed doing its share, just as we have done for generations. ‘Mother of exiles’ it says on the pedestal of the Statue of Liberty at the port of New York. The American people have already welcomed over 200,000 Indochinese. Their talent and their energies immeasurably enrich our nation. We are preparing to welcome another 168,000 refugees in the corning year.”

With no less awareness of Jewish history, Mondale also opposed repeated pressure by his political foe Ronald Reagan to mandate Christian prayer in public schools to please Religious Right groups which have since subsumed the Republican Party.

In September 1984, speaking at the B’nai B’rith international convention, presidential candidate Mondale, who would later tell reporter Jane Meyer that his opponent “may already have been suffering from the early stages of Alzheimer’s disease,” tasked Reagan with toadying to GOP religious extremists: “The president of the United States is the defender of the Constitution, which defends all faiths…The ideals of our country leave no room whatsoever for intolerance, anti-Semitism or bigotry of any kind, none.”

Unlike Reagan, who repeatedly claimed that only Republicans were religious, Mondale cited the fundamental precedent of George Washington’s letter in 1790 to the Touro Synagogue of Newport, Rhode Island, promising religious freedom in America.

After his B’nai B’rith speech, Mondale delivered similar remarks to attendees at the National Baptist Convention.

That Mondale, a decent, progressive politician dedicated to improving the lot of his fellow Americans, including Jewish Americans, was roundly defeated by Reagan was one of the many missed opportunities of recent US political experience.

History, and his American Jewish friends, will not forget Walter Mondale.