So many years after the Holocaust, still an unbearable silence Family Album: Pictures provide clues to the past but few answers. Courtesy of Hedi Molnar

She died too young, too, too young. So, memories are few. It’s the boiled tongue I remember, the very large cow’s tongue – like yours and mine. Don’t recall the cooking. Did water get changed in the very large pot, before it was done? The pink meat was speckled with white. What did it taste like? I don’t have a sense of the flavor but know I wasn’t repulsed by it.

Then there was the stuffed cabbage, with leaves so soft and thin, wrapped around the ground beef with rice, cooked in a light tomatoey sauce. Were there supermarkets? Where did the ingredients come from? No recollection of food shopping with my mother, except once at the butcher shop; glass cases filled with raw beef, liver, chicken. We must have walked there. Was it a Saturday? Otherwise, I would have been in school. I see a narrow wood bench and someone asking for a glass of water. The butcher is clearly annoyed by the request, but fetches a glass.

My mother is having her first heart attack. She is less than 40, and I’m about 10. We must have taken a cab home; hospitalization followed. When I was 16, she had her last heart attack, on a snowy Tuesday night in February. She left in a zippered black bag. 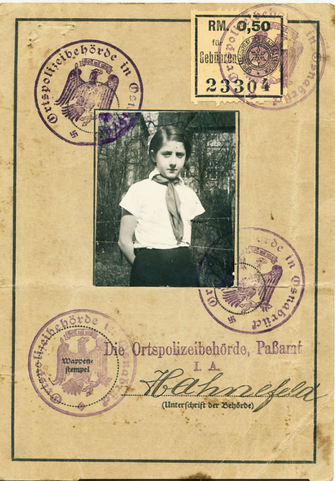 Identity Card: The little once-white card has a photo of the author’s mother, age 12. It is a document that was used for her departure from Germany, on the SS Washington, in 1935. Courtesy of Hedi Molnar

The little once-white card has a photo of my mother, about 12 years old. It is a document used for her departure from Germany, on the SS Washington, in 1935. A white shirt, a red neckerchief. The photo is black and white, but from news photos I’ve seen, I know the scarf is red. This is one of the few items that elucidates her beginnings. The identity card is a wee glimpse into mother’s past.

I grew up not knowing what I did not know. A word that describes my mental condition: dislocation. Mom, born in Germany, arrived here, without her parents, as an adolescent. Dad came to the U.S. in 1947, at 25, a Hungarian Romanian. How they met was not passed to me and my sister.

I know they wed quickly, and my sister was born nine months and 11 days after their March 16, 1947, wedding. My father was stateless when he arrived here from Rome, with a Swedish passport (and a new name) that expired in six months. Memories say that dad adored my mom, however, the fact that she already had U.S. citizenship must have been appealing, too. Aside from two daughters, my parents had no obvious commonalities, besides their very different histories dominated by the tragedies of the Holocaust. The air was infused with their layered pasts, and absorbed by us, through snippets of family lore.

Words, perhaps overheard and feelings transmitted by proximity: sadness, loss, frustration, lack of money, but despite the mental anguish, external order: neat home, nice clothes, tasty food. We had dignity, despite little money. Home: neat, organized, clean. And dignity, by example, despite low income. When I was 11 and we, a family of four, moved from a one-bedroom to a two-bedroom apartment, my mother was in the hospital – recovering from a heart attack. Her relatively short life (she died at 44) was dominated by illness. However, this time she recovered and life as a family continued.

Sweaters knit by Mom – a thin strand to her youth in Germany. She must have learned to knit as a child, before she came to the U.S., alone, when she was 12. I see her on the couch, needles clicking, absorbed, yes, consumed by the repetitive rows of stitches, making another garment. Her stitches so tight and fine; the variety of designs, colors, shapes: vests, jackets, pullovers, scarves; warmly comforting for my father, sister and me. Fifty years on, how many still cling to me — perfectly-knit row after row after row of stitches — still keep me and my mother together. Recently, I started wearing a warm brown wool vest again.

Dad made simple furniture, a round hassock covered in vinyl, gray and red, secured with fancy thumbtacks in a perfectly-spaced circle. “Like a dollhouse,” my father used to say, “like a dollhouse.” This image of our surroundings comforted him. The picture, in color, is vivid: the television, the stereo, the nubby silk-like blue drapes adorned with gold braid. Mom on the couch with her knitting, or cards arranged for countless games of solitaire.

Aside from looking like Dad, I share his sense of humor and pain. The notion that comedy is birthed from personal discomfort (like a pearl!), certainly applies to Dad and me. As I grow closer to the age my father was when he died, I can see the arc of his life, and take a backward look at mine, too. Our shared love of comedy, to mask our ever-present searing pain, binds us together. Dad, with his quite limited English, loved puns. He called our dentist, Dr. Saperstein “Dr. Lunchstein!” In my 30s, I took a comedy workshop, and developed a stand-up routine. Although I didn’t pursue comedy, I still, often, make people laugh. And, I would love to try on the role of brassy female comedian.

For families like ours, suffering the aftermath of the Holocaust, parents often don’t reveal their past until near life’s end.

For families like ours, suffering the aftermath of the Holocaust, parents often don’t reveal their past until near life’s end. Well, dad died at 78, and for me, never got old. For the last 15 years of his life, we lived on opposite coasts and discussed nothing of significance in our rare times together. He did make sure to pass his wedding album, our family photo album, and some documents, to me. I am the archivist. But, the few documents I possess do not provide answers.

Because my parents survived, could have a well-appointed home and a family, and food on the table, it was all treasure. My father collected toiletries (toothpaste, soap, deodorant, mouthwash), often bought at discount stores, some with expired dates. He would gift them to me. Visiting him in California, I remember going to the post office and spending lots to mail pounds of toiletries home. I’ve thought, how very, very dirty Dad must have been during the war.

Where were you born, Dad? When did your mom die? Am I named for her? Tell me the story of your escape and travels in the war. The tattoo on your forearm was a heart with a skull and cross bones and Ploesti. Was that a forced labor camp in the oil fields of Romania? I imagine you wanted a tattoo to identify you if you died in the war. And how did you end up in Rome, in a singing group? You had dreams of singing opera, of being on the stage, I imagine. How you loved to listen to opera; and took great joy in your “50 Great Moments in Music” record. Yes, Dad, I would have liked to have known you, besides the deep pain and loss that cemented us together.

And Mom, never a word that I recall, about your German childhood, the crossing to America, the orphanage, the foster home in New Rochelle, dropping out of New Rochelle High School, meeting Dad.

Unmoored, I am incomplete. And, for so many years now, the silence is unbreakable. Unbearable.

Hedi Molnar is a writer and editor. A former New York Times staffer, her articles have appeared in the Times, and other publications. A New Yorker, she is writing a memoir of the culture scene in NYC

So many years after the Holocaust, still an unbearable silence