Remembering Anne Douglas, a woman of charity and a late convert to Judaism 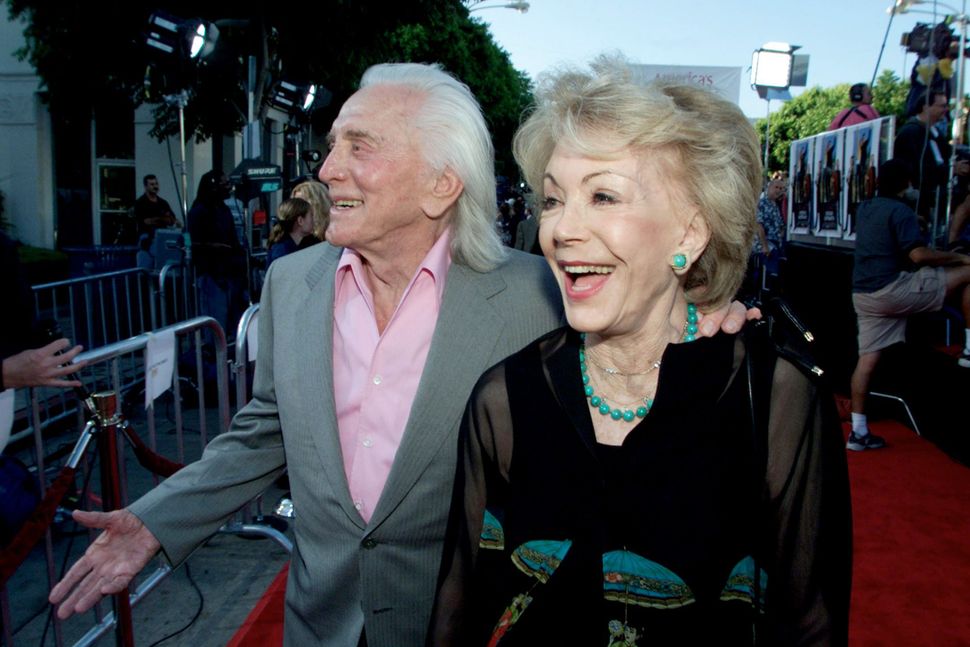 Anne Buydens Douglas, who died April 29 at age 102, collaborated with her husband Kirk Douglas in extraordinarily generous philanthropic ventures. The couple, both of whom reached their centenary, showed that advanced age can be accompanied by heightened humanistic values.

Born Hannelore Marx in Hanover, Germany, to a family of wealthy industrialists, she acquired business smarts directly from her father. This acumen served her well decades later in 1954 when she married Douglas, a movie star whose finances were in a state of ruins.

By astute dealing and investments, as well as a lucrative art collecting habit, Anne Douglas accumulated dozens of millions of dollars, which she and her husband resolved to donate to a range of charities, from health care and social work to the arts.

Topping it off, she converted to Judaism at age 85 in 2004, on the 50th anniversary of their marriage.

Under the direction of Rabbi David Wolpe of Sinai Temple in Westwood, who had also been guiding her husband through weekly Bible study classes, she went through the conversion process, including the mikveh, as she told the Jewish Telegraphic Agency:

“After removing all nail polish, I entered the swimming pool and put my head under the water. I came out looking like a wet dog. But I was Jewish.”

Anne Douglas added the mischievous comment: “Kirk has been married to two shiksas. It is time he got a nice Jewish girl.” She immediately accepted the assignment of lighting Shabbat candles at their home, previously her spouse’s duty.

At a renewal of vows ceremony in Beverly Hills, California, officiated by Rabbi Wolpe, instead of breaking a glass underfoot, the bridegroom, being slightly unsteady on his feet, smacked it with his cane instead.

By then it had long been clear that Anne Douglas had enabled her helpmate to realize his best potential, which included helping others through tzedakah, as the closest way to achieve religious ideals. Part of this charity was expressed in a range of international cultural concerns.

He learned to speak her native language, German, and also her adopted language of French (her family had moved to Belgium and Switzerland before the Second World War).

When they first met in Paris in 1953, she was working as a film publicist. She refused his offer of employment as a bilingual assistant handling personal publicity. She was concerned that a short-lived romantic entanglement might ensue. Her suitor, according to a dual autobiography published in 2017, enlisted three mutual Jewish friends to plead his case.

They were the filmmaker Anatole Litvak, of Lithuanian Jewish origin, who was directing the star in his latest movie, “Act of Love,” the film’s screenwriter Irwin Shaw (born Irwin Shamforoff in the South Bronx) and the Hungarian Jewish photographer Robert Capa.

She finally agreed to accept the job, and soon the couple found that they shared a “wicked sense of humor.”

Some of the wit may have been of the you-had-to-be there variety, but in 2017, Anne Douglas recalled to an interviewer that in their secondary home of Palm Springs, California, to unwind after campaigning for civic improvements, “Kirk and I would take walks on the street with friends from the block. We would buy ice cream around the corner and then walk past the mailbox and jam our cones in it, like naughty juvenile delinquents.”

The Douglases likely discussed such pranks with their household guests, who included the comedian Jack Benny, the novelist Sidney Sheldon, and playwright Moss Hart.

Anne Douglas also became the dedicatee of a series of uxorious poems composed throughout their marriage. The macho star, renowned for athletic derring-do onscreen, was a poetry buff, although characteristically, in a memoir he attributed his interest in verse to the amorous attentions of Mrs. Louise Livingston, a middle school English teacher in upstate New York, when he was only 14.

Whatever the cause, the actor repeatedly cited English poetry, sometimes involving unexpected Yiddishkeit, as in a Newsweek essay in 2008 featuring the poem “Rabbi Ben Ezra” by Robert Browning.

This homage to Abraham ibn Ezra, the medieval biblical commentator and philosopher, begins: “Grow old along with me!/ The best is yet to be.”

Browning’s ibn Ezra discourses on the beauty of old age, which brings added life experience that may be used to develop a finer understanding of the outside world. Rabbi ibn Ezra explains that as people grow older, they understand the nature of God more accurately, permitting them to approach him and accept their own faults.

To a remarkable degree, Anne Douglas enabled her husband’s own self-realization along these lines, including an urgent resolve to help struggling humanity, as he repeatedly told journalists, since without her efforts, there would have been no personal fortune to distribute to worthy causes.

Even so, Kirk Douglas was no scholar of Victorian literature and in his essay, claimed that Browning wrote the poem “when he was young”; in fact, Browning was 52 when it was published.

But such persnickety details hardly mattered, given the range and exuberance of their generosity. As the years went on and they realized their full potential for charitable donation, she became acutely aware of troubling developments on the U.S. political scene.

She wrote in a blog posted online in August 2017:

“As a child in Germany, I had to join Hitler-Jugend (Hitler Youth) where we were indoctrinated with Nazi beliefs and encouraged to spy on our parents and neighbors. Later, when I was surviving in Paris by writing German subtitles for films, my maid denounced me to the Gestapo, eager to report the strange phrases on the work I brought home. I was picked up at 5 a.m. and interrogated for hours. I finally convinced the officer I was not a spy, but only because I could speak German. It was the most terrifying moment of many for me during World War II.”

She wrote of her husband’s battling the antisemitic Hollywood blacklist during the McCarthy era, until a “courageous lawyer for the Army named Joseph Welch destroyed [Senator Joseph McCarthy] with these damning words, ‘At long last, have you left no sense of decency.’ Those are words I wish our congressional leaders would have quoted to the current inhabitant of the White House when he blamed ‘both sides’ for the tragic events at the Unite the Right rally in Charlottesville, Virginia… Neo-Nazis and the Ku Klux Klan seem convinced that President Trump is their friend. He has said little to dissuade them. His first wife Ivana said her husband kept a book of Hitler’s speeches by his bedside, so I wonder where his sympathies lie.”

Like a host of their contemporaries who had struggled against European Fascism in World War II, Mr. and Mrs. Douglas were prescient when they saw its shadow advancing once again on America.

Notwithstanding, they both reached their centenary and proved that at least in terms of their own spiritual development, Browning’s ibn Ezra was right when he asserted that the best was yet to be.

Remembering Anne Douglas, a woman of charity and a late convert to Judaism