My mother, my dream and Mama Rose 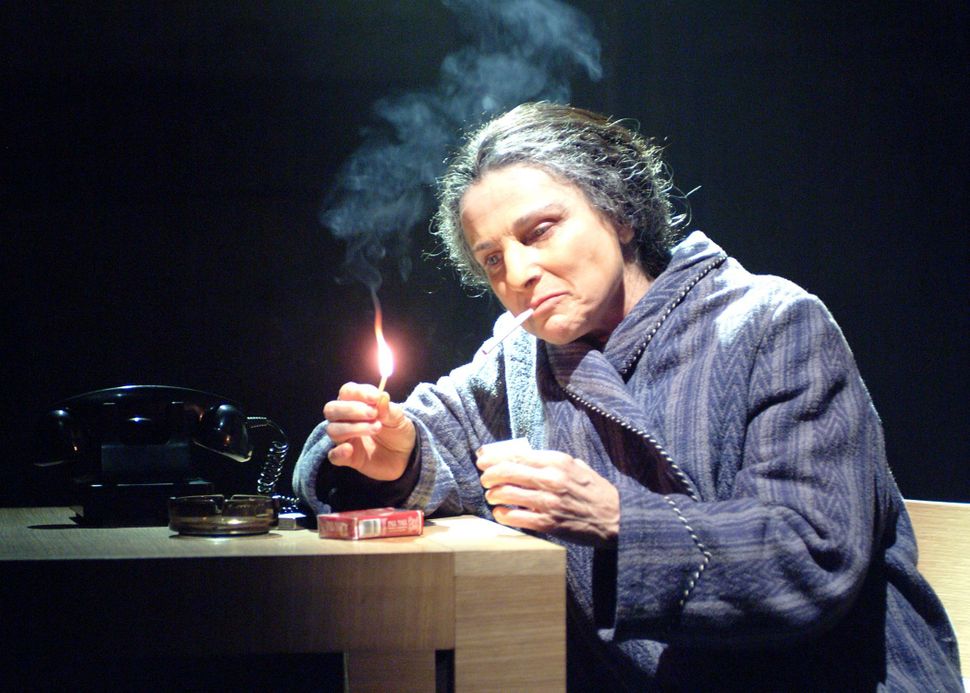 My mother, Lily, was born in 1911 on a dining room table in the Bronx. She would live through World War I, the Spanish Flu, Women’s Suffrage, the Roaring Twenties, the Stock Market Crash, the Great Depression, and World War II before she was 30. She took her final bow on June 23, 2014 at over 103 years young. During the more-than-six decades that Lily and I were figuring us out, expectations for women were transformed again and again by the women’s movement, the sexual revolution, and the subsequent mandate for women to “have it all.”

In my career, now in its 50th year, one of the roles I had the good fortune to play, in what I believe to be one of the best musicals ever written, is Rose, in Arthur Laurents, Julie Styne, and Stephen Sondheim’s “Gypsy.” 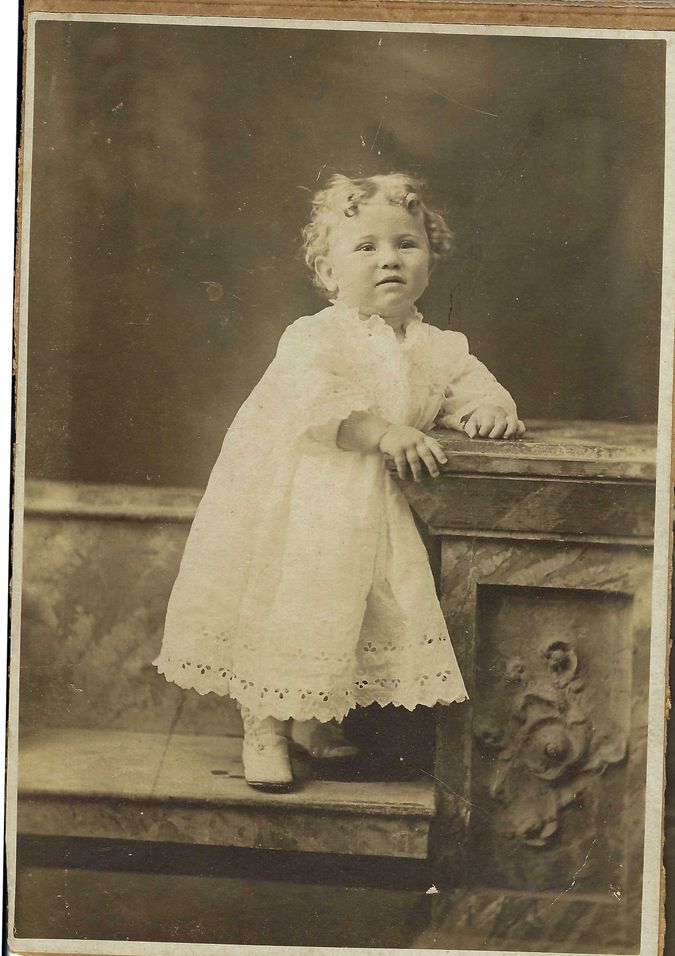 As much as Mama Rose was an unstoppable force of nature in the American musical lexicon as well as in the stage careers of her daughters (“SING OUT, LOUISE!”), so my Mama Lily was just as much a force of nature in my life — but their powerful gales were blowing in opposite directions.

Oh, to have a stage mother like Mama Rose instead of an offstage mother like my Mama Lily: she wanted me off the stage. When I asked to go to Juilliard, Lily barked “You’re not going to a trade school!” On the way to the theater she would snap: “When you come home at night from your standing ovations, the house is dark and no one cares. All they want is their wife and their mother.”

In their show biz orbit, Rose, who would outfit herself and her children in coats made from hotel blankets, aspired to have her Dainty June playing the Orpheum Circuit before she was 12. In my suburban orbit in Scarsdale, I was vocalizing at the piano in our living room when I was 16. My mother walked in, in her meticulously-pressed shirtwaist, with matching shoes and cultured pearls, and proceeded to ask “Don’t you have to be born with a voice?”

You could have blown me over with a feather.

Rose relentlessly pushed her daughters’ careers forward with lyrics like “You’ll be swell, you’ll be great, gonna have the whole world on a plate!” My mother’s reaction to my theatrical dream was: “You wanna be an actress? Why don’t you just go into the kitchen, get my challah knife, stick it in my heart and twist it?”

No matter how high I climbed on the professional ladder, there was always a Lily-rupture awaiting me. Even when I was cast as Prime Minister Golda Meir on Broadway in what would become the longest-running one-woman play in New York theater history and garner me my fourth Tony nomination, she said: “Tovah, I rate your parts by how you look. Dolly Levi is a ten. Golda Meir? ZERO!” 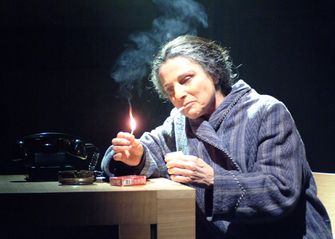 And then there was the time she called and said, “I’m not coming to see you in the… ‘Virginia’ Monologues, I can’t say the word!”

I took her to the matinee of “Pippin,” where I was playing the show-stopping Grandma Berthe. Berthe does a full-out aerial act while singing the anthemic “No Time at All.” The number brings down the house. Look, you put an old bird singing upside-down on a trapeze, and it engenders hope in everyone.

I go to my mother after the show and, like a two-year-old grasping for mother’s milk, I say, “Mommy, how did I do?” And what does she say? “Tovah, that you should still have to earn a living like this. And on a trapeze, yet!”

That was my mother, Lily. She didn’t give an inch.

When I was at Sarah Lawrence College; Michael Fairchild, the young man I was dating, asked if I went by any other name than my birth name Terri Sue. When I told him my Hebrew name was Tovah, he became rhapsodic. He made a meal out of the vowels, “TOHHH—VAAAAAH! Now that’s a name!” 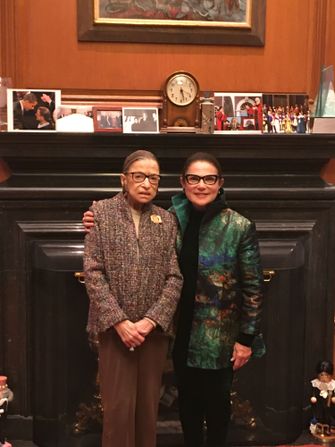 In Camera: Feldshuh with Ruth Bader Ginsburg while preparing to play her in the play ‘Sisters in Law’ by Jonathan Shapiro. Courtesy of Tovah Feldshuh

When I was cast as the lead in the Broadway musical “Saravá,” she said, “This show is as unpronounceable as your name!”

That name change to “Tovah,” indeed changed the landscape of my life. Had I kept the name Terri Sue Feldshuh would I have been cast as Yentl, Helena in “Holocaust,” Danielle Melnick in “Law and Order,” Judy Stein in “Kissing Jessica Stein,” Lillian Kantrowitz in “A Walk on the Moon,” and the two crowners: Supreme Court Justice Ruth Bader Ginsburg and Prime Minister Golda Meir? Eventually my mother warmed to the name. After all, a branch, in order to bear fruit, must learn to bend. My career was bearing fruit. My mother bent. 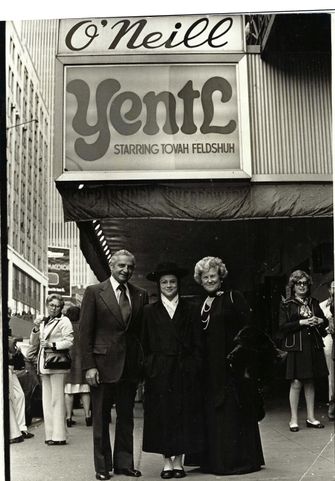 Under the Marquee: Feldshuh starred in the title role of ‘Yentl’ on Broadway in 1974. Courtesy of Tovah Feldshuh

Mama Rose’s dream for her children was the Orpheum Circuit replete with grease paint and footlights. Mama Lily’s dream for me was a B.A. immediately followed by an M.R.S. degree, topped off by a K.I.D. While Mama Rose was waiting in the wings with “You can do it. All you need is a hand”, for Lily, the only hand you needed was the all-important hand in marriage. On my wedding day to Andrew Harris Levy, she said: “Now, you can do anything you want. You’re marrying a Harvard lawyer.” Far be it from me to point out “Yentl” had just won me five major awards and put my name on a Broadway marquee.

Time has given me a valuable insight on the conflicting mantras between Mama Rose and Mama Lily. The pursuit of fame left Rose with an empty nest as Baby June and Louise metaphorically and literally shut Rose out of their dressing rooms. In her eleven o’clock number “Rose’s Turn,” Rose seethes: “Give ‘em love and what does it get you? One quick look as each of ‘em leaves you.” And they did. Now, alone on an empty stage, she demands: “Somebody tell me when is it my turn?”

In fact, it will never be Rose’s turn. Her children will go on to their own fame, and excise their mother from their lives. The opposite is true of Lily. Ironically, because Mama Lily believed fame was a hollow crown, she stood by values she felt would last and instilled them in us: family and legacy. In the last twenty years of her life, Mama Lily was rewarded by becoming the star of the family, the sun around which the solar system of the Kaplan-Feldshuh planets revolved.

I’ve come to realize Mama Lily may have given me a gift with her obstinate resistance to my becoming an actress. I knew I had to make it on my own and carve my own professional path. My childhood was not filled with singing, tap-dancing, and ballet lessons. It was filled with Hebrew school and hours of practice on the piano: Torah, Bach, and Beethoven. There was no helicopter mom to fly in on my behalf if casting was not going my way. Acting in plays was peripheral and only permitted if I first excelled in schoolwork.

When I was voted Best Actress of the senior class at Scarsdale High, my mother trumpeted, “That’s nice, but it’s not like being voted Most Likely to Succeed!” She made it very clear that she would not give me a dime to support my career, so I had to earn the funds myself—and I did. I paid for my classes with Uta Hagen by tutoring Spanish and French to Bronxville High School students while I was at Sarah Lawrence. In the end, Lily’s lack of support fostered in me the inner resources and moxie I needed for my dream to take flight. I knew I was flying solo against the Mama Lily headwind. I had to develop my own strength and the wingspan to soar. 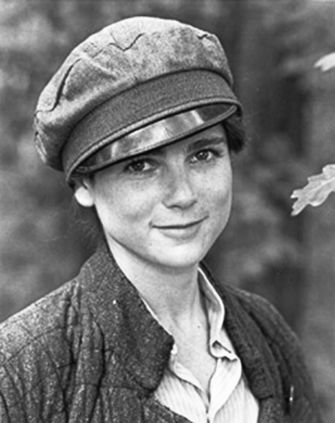 Unlike the musical “Gypsy,” which only has two acts, my memoir “Lilyville” has a surprising third act. After the death of my beloved father, my mother Lily didn’t wither but instead blossomed like her namesake. In Lily’s third act, which would last almost two decades, she grew to be the mother I always dreamed of: my number one advocate and champion. Perhaps the most vivid example of this was when she accompanied my husband Andrew and me to Radio City Music Hall for the 2004 Tony Awards where I was nominated for my performance as Prime Minister Golda Meir in the one-woman play “Golda’s Balcony.”

When my name was not announced as a winner, Lily turned to the actor sitting next to her and said, “Where can I get a Tony? I want to buy one for my baby.” She then began to write daily emails of praise for my work. How many centenarians do you know who have mastered the internet and have a vibrant voice online? Ready or not, here comes Lily!

Which brings me to the lyric: “Together Wherever We Go.” 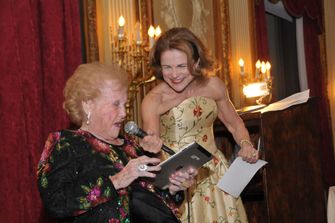 Mother and Daughter: Tovah Feldshuh with her mother Lily. By Anita & Steve Shevett

In “Gypsy,” Rose sings this at a point of desperation trying to keep her team together as they buck the odds of the decline of vaudeville. Ironically, in my life, this lyric reflects the unexpected embrace my mother proffered me in our relationship, a bouquet that continued to flower for the last eighteen years of her life till she drew her last breath.

As Mama Lily leaned toward me, so I leaned toward her. I realized that her values were of paramount importance to me in my lifelong run. I also came to realize that the most profound role of my career was the role of Lillian Kaplan Feldshuh’s daughter, a part I never auditioned for and now felt lucky to get. In the evolution of my relationship with my mother and in the years since her death, I have taken on her mantle as the gatherer of the family. Her voice lives in my voice. Her heart beats in my heart, as it will in my children’s and grandchildren’s by telling our story.

This is a dream Mama Rose could have never imagined.

Tovah Feldshuh is a 4-time Tony and 2-time Emmy nominated actress known for her starring roles as Israeli Prime Minister Golda Meir in “Golda’s Balcony” (the longest-running one-person-show in Broadway history), Irena Gut in “Irena’s Vow” and the title role in “Yentl”; her performances in Broadway productions like “Cyrano,” “Lend Me a Tenor,” “Pippin” and many others; and her television roles as Helena Slomova in the internationally acclaimed mini-series, “Holocaust,” as hypercritical mom Naomi in Rachel Bloom’s smash hit “Crazy Ex-Girlfriend” and Deanna Monroe on AMC’s “The Walking Dead.” She published her first memoir, “Lilyville: Mother, Daughter, and Other Roles I’ve Played” was published in 2021.

My mother, my dream and Mama Rose