Michelle Zauner’s new memoir will tell you how grief tastes 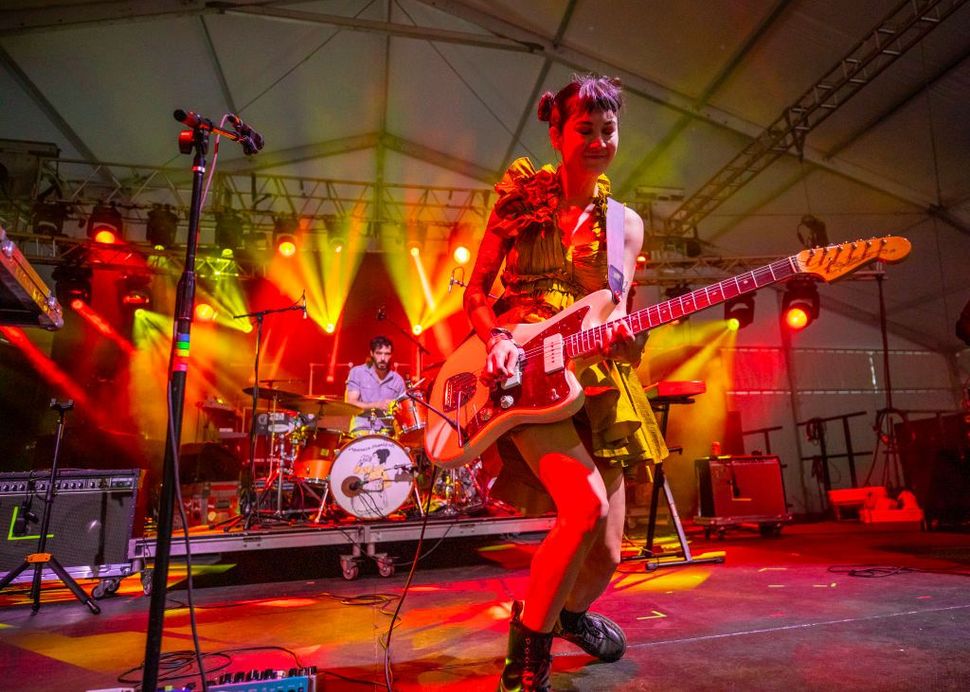 Zauner performing at a 2019 music festival. Image by Getty Images

If you don’t think great human drama can play out in a supermarket, just read the first pages of Michelle Zauner’s new memoir, “Crying in H Mart.”

The largest Asian supermarket chain in the United States, H Mart takes its first initial from the Korean phrase han ah reum, which means “one arm full of groceries.” But, Zauner tells us, H Mart is more than a purveyor of staple goods. H Mart is “freedom from the single-aisle ‘ethnic’ section in regular grocery stores.” H Mart is where homesick college students can find authentic soup dumplings, where families can gather at the food court and share banchan, the vegetable side dishes distinctive to Korean cuisine. And it’s the place Zauner goes to mourn her mother, with whom she used to peruse its aisles.

Born in Eugene, Oregon to a Korean mother and an American father with Jewish heritage, Zauner, 32, is best known as the musician Japanese Breakfast, whose dreamy indie ballads have resulted in three albums and too many festival performances to count. But in 2014, Zauner was waiting tables in Philadelphia and writing songs by night when she got a devastating call: Her mother, Chongmi, had been diagnosed with late-stage gastrointestinal cancer.

An account of the time Zauner spent nursing her mother, who passed away months later at the age of 56, “Crying in H Mart” is an unsparing examination of it means to care for a dying person. It’s also a family history through food, cataloging the rice cakes and knife-cut noodles that united a mother and daughter frequently at odds. And it’s an attempt to make sense, through Korean cooking, of the woman Zauner was just beginning to understand: A mother who cooked and criticized in equal measure, a proud homemaker who seemed to give everything to her family but told her daughter that in every relationship, she should “save ten percent of yourself.”

I reached Zauner at the Brooklyn apartment where she’s been hunkered down throughout the pandemic, preparing for the release of “Crying in H Mart” and her latest album, “Jubilee.” We talked about chronicling illness, cooking through grief, and what to buy at H Mart. The following conversation has been edited for length and clarity.

Irene Katz Connelly: What’s it like to release a memoir and an album at the same time? 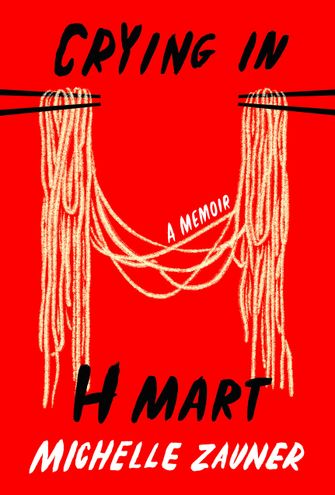 Michelle Zauner: It’s wild! I would say it’s ill advised. But after a long year of feeling very creatively constipated it’s nice to let the babies go and have lives of their own.

Why were you feeling creatively constipated?

Well, I spent the past three or four years working on this album and this book. I kind of felt like I had already been quarantining. I had spent so much time working that in March I was finally ready to embrace living again — and then, of course, we went into lockdown.

In the book, you sketch out your development as a musician but you don’t tell us much about becoming a writer. How did you make your way there?

Neither of my parents went to college. I probably didn’t grow up with much more than a Tom Clancy book in my house. So everything that I read was stuff that I picked up from school or shitty Chuck Palahniuk or Bukowski books that exes had given me. And then in college I met a professor named Daniel Torday, who taught creative writing courses. My brain was just on fire when I took his class and we were reading Jhumpa Lahiri, Lorrie Moore, Marilynne Robinson, Philip Roth, John Updike. I was writing a lot of short fiction, and I thought maybe someday I’d write a collection of short stories. But I never really thought about writing nonfiction because I didn’t have any interest in writing about my identity. And It wasn’t until my mom passed away that I stopped thinking about that and needed to tell the story at hand.

I’m always curious about artists who work in many mediums. Does making music feel very different from writing?

I was cocky going into the book, they would be similar enough. I went in with the confidence of making a lot of records. I knew I had the ability to see a large creative process through to the end. But there’s really no skipping steps in writing a book, and it was much more of a challenge than I anticipated. There’s a lot of fun stuff that comes with making a record: It’s much more intuitive and looser and impressionistic. If the song is really not working, I can throw it away. But in the book, the story is the story. If it’s not working, you have to keep plowing into the wall until something gives.

One of my favorite lines in the book comes when you choose the word “lovely” for your mother’s headstone: “To be a loving mother was to be known for a service, but to be a lovely mother was to possess a charm all your own.” It must have been hard to write about your relationship and about your mother as a person in her own right.

Someone asked me recently, “Was your mother bored in Oregon?” And I never knew it if she was. She was probably super busy looking after me; I was her job and I was all-consuming. But even saying that, that’s my impression. She probably was bored and I just didn’t know it. So I tried to be honest with those moments, that I don’t know everything about my mother.

There’s another section of the book where I talk about sanctimoniously belittling the role she was most proud of. I looked down on my mom in my adolescence, because I had this very not-nuanced type of feminism where I was like, “My mom doesn’t have a job, so she has no passion or drive.” It was hard for me to understand the invisible labor that goes into caretaking and being a mother.

Which is ironic, because when she got cancer you became a caretaker yourself. Reading your book actually made me realize how few accounts we have of caring for people who are sick. Did you have a sense that what you were writing was taboo in any way?

That’s a big reason that I wanted to write the book — I was so angry that I had no idea what I was in for. I felt so alone in this experience, and I felt like no one knew or could ever know what I endured. So much of writing this book was that I needed people to know what I went through.

You were very close with your mother, despite the fact that you often valued different things. What do you think she would think of this book?

I most like to think that if my mother and I had found out about a half-Korean girl who lost her mom to cancer, if I had read that book and shared it with her, that she would say to me, in a sort of jabbing way, “I hope when I die you’ll love me enough to write something like that.” Even some of the things she said to me, I think of them as very poetic. The way she said, “You always used to cling to me and here you are, still clinging to me,” those are ripe poetic lines that came out of her.

There’s also her catchphrase, “Save your tears for when your mother dies,” that was so annoying to you until you discovered she inherited it from her own mother. What qualities of your mother do you think you’ll end up passing down?

She probably felt like, “I’ll never say this to my child,” and it comes out anyway. I think I would pass on a lot from her even though as a kid I swore I would never. I can see it even now: I always hated that she would get mad at me for getting hurt, but I already do that to my husband. I think that saving ten percent is a good one, although I don’t know if I always succeed at that.

Was there a particular moment when you realized you were going to write this book?

I was working at an advertising company. It was my first office job and I was so miserable. I would go to work from 8 a.m. to 7 p.m., do the Sweetgreen salad at my desk, and feel like I accomplished nothing. After work I started writing a nonfiction essay just for fun, because I’d never done it before. It started with a cuter idea, about [the Korean food YouTuber] Maangchi, and how this woman on the internet affected my life. I thought it was a sweet “Julie and Julia” story for Korean people. When it won Glamour’s Essay of the Year contest in 2016, that was the validation I needed.

What are your recommendations for an H Mart novice?

If you’re having a picnic at the park, I would recommend you get a bottle of makgeolli, which is a sweet rice wine. Then I would get kimbap, which is the perfect picnic dish: It looks like a sushi roll but it has lots of vegetables, and it’s kind of healthy.

A lot of Korean people have their own butane burner, and my favorite thing to do is get a package of pork belly strips and fry it. Then you get red leaf lettuce and ssamjang dipping sauce, you cook some rice, and you make wraps. That’s a good dinner, especially in the summer if you have a balcony.

And then, if you want to do some sad girl lonely apartment time, I would recommend putting on a mukbang, an eating show — it’s just people eating on camera. A lot of them will eat this thing called “fire noodles,” which is really spicy ramen. Buy a couple Kraft singles and melt them on top, and then get a bag of kimchi and eat it together. Those are three paths you can take at H Mart.

Michelle Zauner’s new memoir will tell you how grief tastes