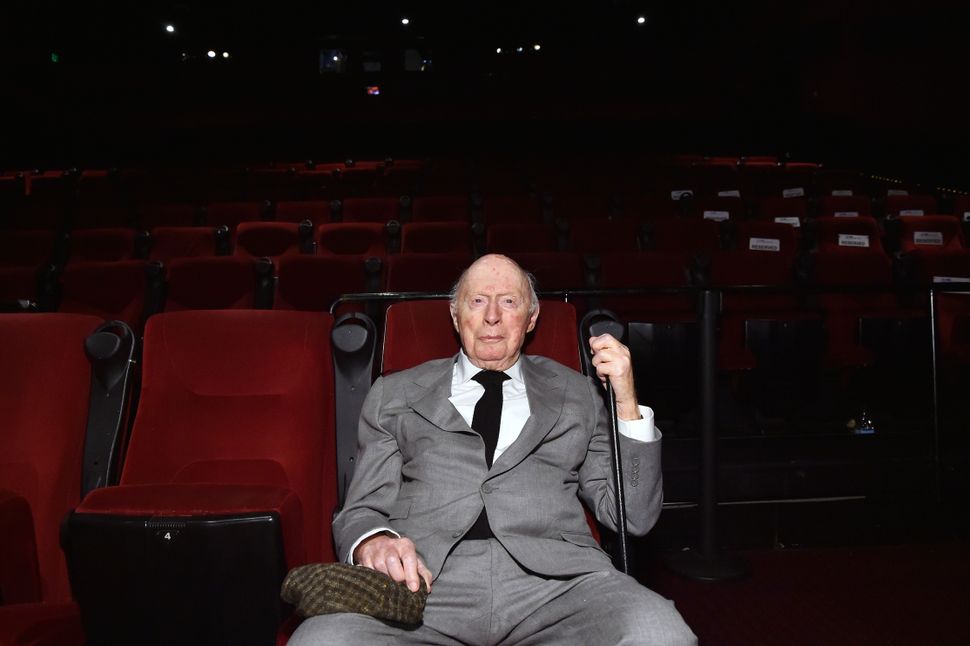 The American Jewish actor, director and producer Norman Nathan Lloyd, who died May 10 at age 106, proved over a long career how in show business, it’s who you know as well as what you know that counts. In his 1990 memoir “Stages,” Lloyd explained how he was born in Jersey City to Conservative Jewish parents who hastened back to the Bronx and eventually to Flatbush to enjoy New York culture.

His father Max managed a furniture store while his mother Sedia was a frustrated singer. When Lloyd was around nine years old, his mother took him for elocution and dance lessons. Lloyd and his mother haunted Broadway musicals of the 1920s and 30s, idolizing Al Jolson and Eddie Cantor, as well as the composers George Gershwin, Jerome Kern, Irving Berlin and Harold Arlen. As Lloyd told The Jewish Week in 2007: “The Jews are an artistic people… It’s clear from the music, the actors, the writers. They are just artists. In the early part of the 20th century when they first came over they had no money, but they still went to theater. The theater and education were the two biggest things in their lives. More important than clothes. I think it’s always been inherent in the race.”

Invited to Hollywood for an abortive Welles film project, Lloyd declined to stick around in the hope that a different planned film might work out, and returned to paid work on Broadway, thereby missing out on being cast in “Citizen Kane.” Instead, Houseman recommended Lloyd when Alfred Hitchcock was looking for an unknown actor to play the title role in his 1942 film “Saboteur.” There, Lloyd’s sneeringly ironic performance and intangible foreign look made him a memorable baddie whose fatal fall off the Statue of Liberty has entered cinema history.

Hitchcock would remain a solid professional friend, eventually employing Lloyd as producer and director for his TV suspense programs. Schmoozing with Hitchcock at marathon meals, Lloyd was also a dedicated tennis player, and was eventually invited to play several times each week with Charlie Chaplin, an avid athlete. Lloyd’s proteiform acting talents allowed him to be a bon vivant with Hitchcock and a sportsman with Chaplin (who cast him in “Limelight” (1952)). Lloyd would also appear in Hitchcock’s “Spellbound,”, “A Walk in the Sun,” and “Arch of Triumph,” the latter two directed by Lewis Milestone (born Leib Milstein to a Russian Jewish family).

Later audiences applauded Lloyd in films such as “Dead Poets Society” and Martin Scorsese’s “The Age of Innocence” as well as the 1980s TV medical drama “St. Elsewhere,” as Dr. Daniel Auschlander, who battled liver cancer and a stroke. Lloyd later told the Archive of American Television (AAT) that this role was due to the intervention of yet another friend, series producer Bruce Paltrow. Lloyd described his character Auschlander, born on New York’s Lower East Side, as a “Jewish man who worked his way up in the medical profession.”

Auschlander’s mother was a garment district seamstress and his father a manual laborer, yet the family would scrape together enough money to pay for standing room at the Metropolitan Opera. Lloyd’s own family history was less impoverished, but Auschlander’s background struck a chord with him, comparable to his own mother’s efforts to imbue him with culture. As a producer, Lloyd did much to bring culture to TV, presenting Arthur Miller’s “Incident at Vichy,” Bruce Jay Friedman’s “Steambath,”, Clifford Odets’ “Awake and Sing,” (starring Walter Matthau) and Lillian Hellman’s “Another Part of the Forest,” among others. These achievements, bolstered by Lloyd’s keen intelligence and talent, would make his career ardently admired, as was perhaps best seen in the 2007 documentary tribute “Who is Norman Lloyd?,” directed by Matthew Sussman.