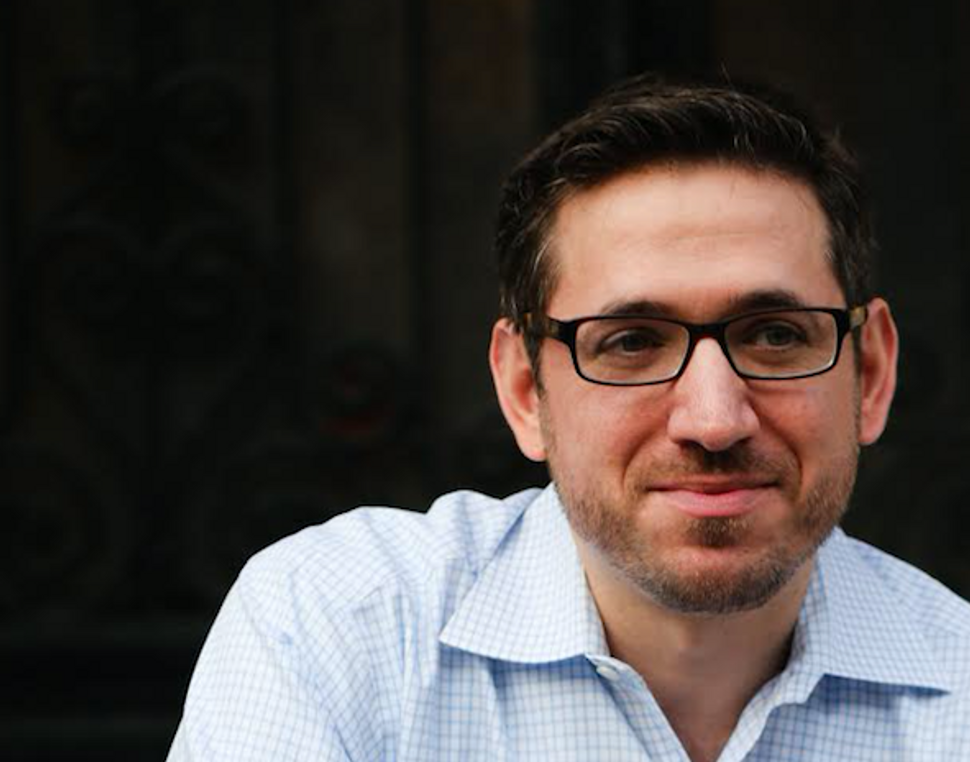 When Schneur Zalman Newfield studied at Chabad yeshivas, everyone thought he was a pious young man who had little knowledge of the outside world. They couldn’t have imagined that Newfield had secretly assembled a stash of contraband books – modern Yiddish literature, science and history texts and even Russian novels – which he feared would lead to his expulsion.

The scenario might sound like something you’d read in the memoirs of a Jewish intellectual raised before the Russian revolution. But Schneur Zalman Newfield is still in his 30s. Born in Brooklyn in 1982 and brought up in the Lubavitch bastion of Crown Heights, today he is an assistant professor at Borough of Manhattan Community College who specializes in the sociology of religious communities. His monograph, “Degrees of Separation: Identity Formation While Leaving Ultra-Orthodox Judaism,” is the first sizable scholarly study of ex-Hasidic Jews by someone who has left a Hasidic community.

Like many Lubavitch Hasidim, Newfield’s parents are baalei-tshuva or Jews who became religious later in life. His father, Shlomo, is a dermatologist who graduated from Columbia and earned his medical degree from Harvard. His mother, Basha, went to Queens College. Despite his parents’ academic backgrounds, they sent him to religious schools and yeshivas where no secular studies were taught. Although he spoke English at home, he could read only Yiddish and Hebrew.

A trip to the post office would launch a sequence of events that altered Newfield’s path in life. When he was 14, his father took him to apply for a passport. As he was unable to read or write in English, Newfield’s father filled out the paperwork for him, but the post office worker wouldn’t allow someone else to sign it. Newfield’s father showed him how to write his name and had him practice several times until he could do it himself. Realizing he was limited by his illiteracy in English, Newfield decided to learn how to read and write in his mother tongue.

His uncle, Jeff Janus, to whom he would later dedicate his book, “Degrees of Separation,” tutored him in writing and gave him elementary English primers. Within a few years, Newfield graduated to more sophisticated material, devouring classics such as Aleksandr Isayevich Solzhenitsyn’s “The Gulag Archipelago” and what he described to me only half-jokingly as “goyishe bikher” (gentile books) – masterworks of Yiddish literature by Sholem Aleichem and Isaac Bashevis Singer.

“The more secular literature and history I read, the more interested I became in learning further,” Newfield said. “I had a thirst to learn about the outside world and others’ beliefs.”

Before Newfield was 23, he had seen more of the world than most Americans. Besides attending yeshivas in Miami, Chicago, Morristown (New Jersey), Crown Heights and Buenos Aires, he had spent a summer as a shaliach, or religious emissary, in Singapore and visited Russia, Paraguay, Australia and Vietnam.

“But I was always in spaces where the ‘Lubavitch bubble’ was dominant,” he noted.

Like most of the 74 ex-Hasidim Newfield interviewed, no one event led him to leave his community. Ideas he encountered in books played a role, as did the death of the movement’s charismatic Rebbe, Menachem Mendel Schneerson, whom Lubavitchers saw as a likely Messiah. In Singapore he befriended Rabbi Dr. Rachel Safman, a professor of sociology who stirred his interest in the social sciences. After earning his GED at 21, Newfield attended Brooklyn College and earned a PhD from NYU. Reading sociological studies of “religious exiters,” Newfield notes in “Degrees of Separation,” “stopped me in my tracks and ultimately led to this book.”

In “Degrees of Separation,” which compares the experiences of Lubavitch and Satmar “exiters,” Newfield argues that even when those raised Hasidic leave the community physically, mentally they can never make a complete break from it. The values, beliefs and habits with which they were raised continue to color every aspect of their lives, from how they understand human relations to mundane actions like how they tie their shoes. Newfield notes that ultimately ex-Hasidim live in an “in-between state” even years after leaving. 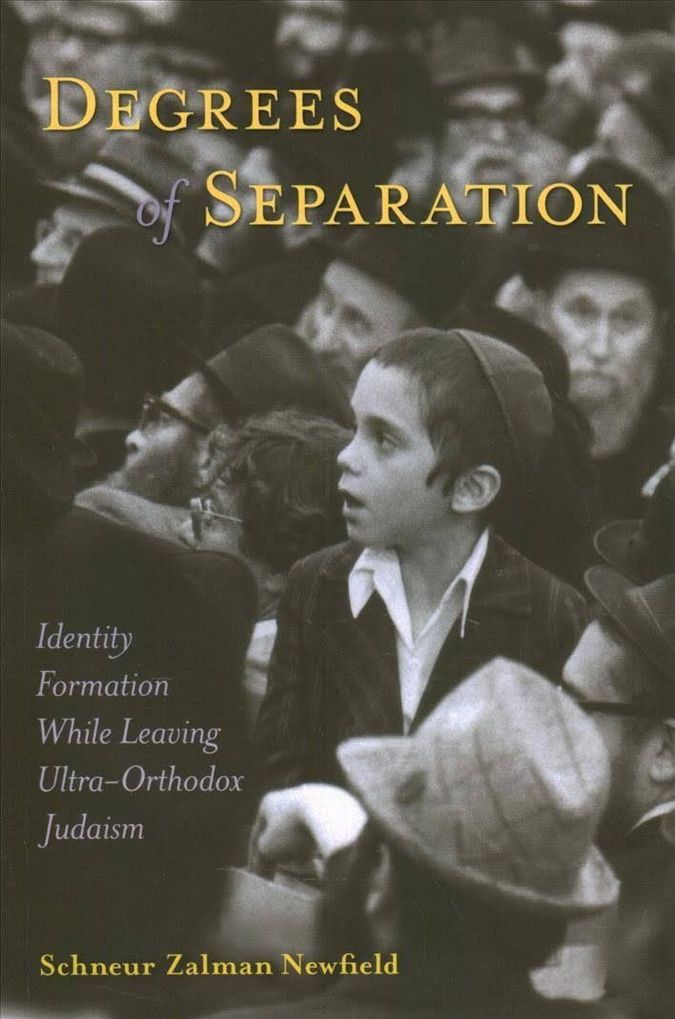 Coming from the community he was studying presented Newfield with both advantages and challenges. Newfield’s fluency in Yiddish and familiarity with Hasidic life proved invaluable for his research. However, he had to be careful not to project his own experiences onto his interviewees. In some cases, his Chabad background may have made his Lubavitch informants hesitant to divulge certain sensitive details, especially those involving sexual abuse.

One striking aspect of Newfield’s research is his examination of the different measures the Satmar and Lubavitch communities take to prevent members from leaving. While Satmar Hasidim aim to isolate themselves, building exclusively Satmar towns like Kiryas Joel, Lubavitch Hasidim live in what Newfield terms the “Lubavitch bubble” or “Global Lubavitch.” Far from being insular, they have regular contact with less religious Jews because of the community’s outreach work. That doesn’t mean, however, that Lubavitch Hasidim necessarily accept a child’s decision to leave the community.

One informant, Dina, the daughter of Chabad emissaries, told Newfield that her parents are accepting of all Jews, secular or religious. Yet, her own decision to leave the community was beyond the pale for them.

Newfield explained that the contradiction stems from the fact that a non-Lubavitch Jew who visits Crown Heights or Chabad outposts elsewhere is thought of as “a child who was born among the gentiles.” Therefore he can’t be blamed for not knowing better.

“But if an ‘eygene’, an ‘undzere’ [both terms mean roughly ‘one of our own’], wants to leave, it’s a real problem,” Newfield said. “How can it be that people who saw the light, who know the beauty and warmth of the Hasidic lifestyle, how can they decide that they want to live a non-Orthodox lifestyle? It’s an existential threat and they have to be isolated and handled in some way so as not to contaminate the community.”

No matter how harsh the response to Lubavitch “exiters,” it’s often mild compared to what Satmar “exiters” face.

“The threat of kicking children out of a Lubavitch yeshiva because of the parents’ violations is unheard of,” Newfield said. Satmar Hasidim, however, do try to curb their neighbors’ behaviors with the threat of expulsion. A woman who begins wearing less conservative clothing or a man who trims his beard too much may be warned that if they don’t change their ways their children will be expelled from the community’s religious schools.

“The schools work in cahoots,” Newfield said. “If the kids are kicked out of one school, other schools won’t accept them. If the parents want their kids to go to Hasidic schools, they will have to move. It’s a way of kicking a family out of the community even if it’s not articulated that way.”

In divorce cases, the community frequently raises hundreds of thousands of dollars to ensure that “exiters” don’t get full custody of their children.

For many community members, this isn’t perjury—leaving the community is considered a sign of mental illness. And if an “exiter” is deemed sane, it’s often assumed he comes from a broken home or has suffered sexual abuse. While five of Newfield’s subjects did report having been sexually abused, most did not cite it as their primary reason for leaving.

Despite the retaliation some community leavers face, Newfield told me that nearly all of the 74 ex-Hasidim he interviewed remain in contact with their families.

“There’s a widespread misconception that Hasidim excommunicate or shun those who leave and cut off all communication,” Newfield said. “That’s not the case at all. Most families maintain ties.”

Newfield himself is close with his parents and siblings.