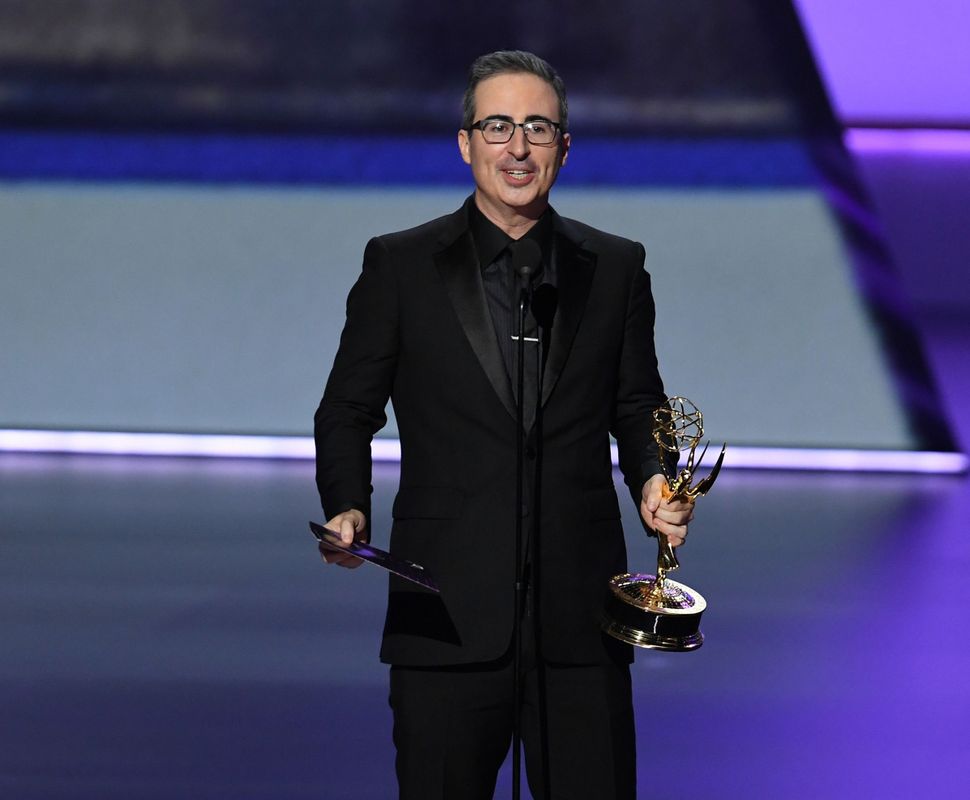 John Oliver is no stranger to upsetting people — I mean, he upset the city of Danbury so much they named a sewage plant after him.

But on Sunday’s episode of “Last Week Tonight,” Oliver took his own trademark Etonian anger to the Levant, accusing Israel of war crimes in their response to rocket fire from Gaza.

“This isn’t tit for tat,” Oliver said, citing a “massive imbalance” between the weaponry of the IDF and Hamas-controlled Gaza. “While most of the rockets aimed toward Israeli citizens this week were intercepted, Israel’s air strikes were not. They hit their targets, including a house in a refugee camp, a building housing the Associated Press and Al Jazeera, and [a] 13-story office and apartment building. And while Israel insisted that there were military targets in that building and they destroyed it as humanely as possible, even warning people to evacuate it beforehand, destroying a civilian residence sure seems like a war crime, regardless of whether you send a courtesy heads-up text.”

Once again, John Oliver — a comedian — does a better job providing context than seasoned journalists: https://t.co/SVvZwXtC4k

John Oliver absolutely on the money here on America’s unwavering friendship to Israel: “I would hope that a real friend would tell me when I’m being an arsehole, and definitely when I’m committing a fucking war crime.” https://t.co/RiCnUKWS63

One user opined that what Oliver said “would have gotten your career in media and journalism destroyed in a second not too long ago, and still does if you’re Palestinian and Muslim.”

On the pro-Israel side many accused Oliver of missing nuance or ignoring the tactic of Hamas placing rockets in civilian areas. Michael Dickson of StandWithUs tweeted directly at Oliver, inviting him to “come and join me in the bomb shelter here in Israel while Hamas indiscriminately fires on us.”

.@iamjohnoliver – please come and join me in the bomb shelter here in Israel while Hamas indiscriminately fires on us.

In fact, I’ll pay for your flight.

Or you could quit being a ignorant tourist in a conflict you have never experienced and barely understand. pic.twitter.com/F89bIjPLoc

I was surprised by the shallow arguments @johnoliver. It’s surely not a both-sided situation – one side uses the weapon to PROTECT civilians, and tries to fight terror with minimal civilian damage, while the other side tries to KILL CIVILIANS.

John Oliver is like a skittish kid who got his own talk show. Now he makes up crazy analogies as to how Hamas is not bad cause their rockets are intercepted but Israel’s are hitting target. Tf. #Israel

Someone needs to explain to @iamjohnoliver why Israel has had to develop such a sophisticated military. Without it, there would be no more Israel. Not to mention using schools, hospitals, and civilians as human shields. NP. Let’s make sure more Israelis die so you feel better.

Eytan Weinstein of the Two Nice Jewish Boys podcast, posted a reaction to Oliver’s clip on YouTube, questioning why the power imbalance was the focus of Oliver’s argument.

“Just because one country is more powerful than the other does not mean it has more responsibility,” said Weinstein. “Both sides have a responsibility to be moral and ethical and act in a humane way.”

In eliciting such a strong response, some noted the tone surrounding the conflict had changed notably since the last major Israeli offensive. Matthew Dessem of Slate compared Oliver’s talking points to his old boss Jon Stewart’s milder remarks during 2009’s Operation Cast Lead.

“Stewart catalogs American politicians on both sides of the aisle mouthing the same platitudes about the situation— but it’s a long way from talking about ‘apartheid’ or ‘war crimes,’” Dessem wrote.