In the music of Bob Marley, a deep connection to Judaism 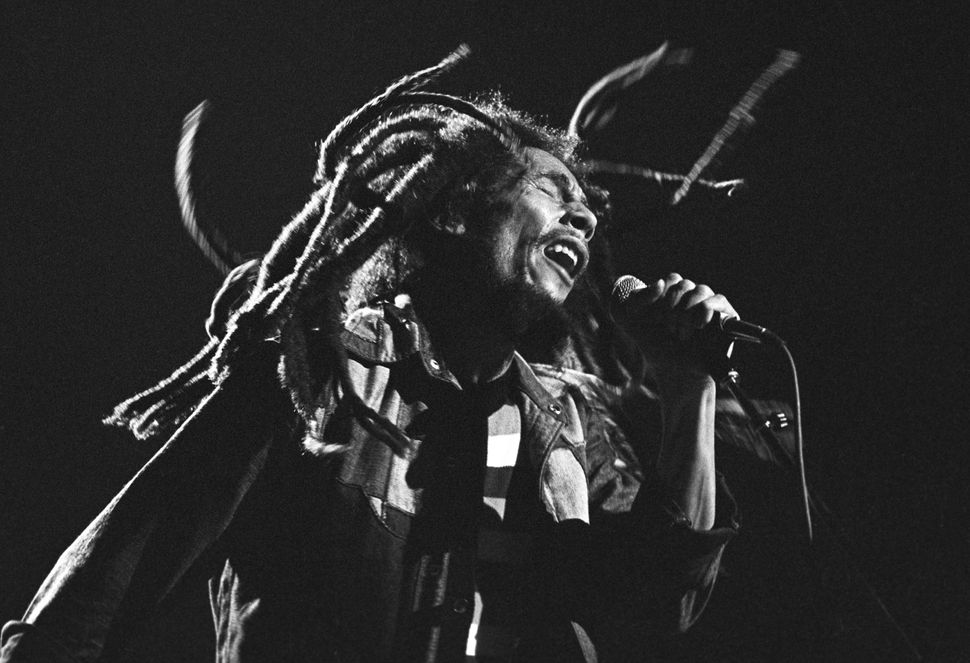 Now that 40 years have passed since the May 1981 death of reggae pioneer Bob Marley, it’s worth noting how the impact of Jewish family lore may sometimes exceed mere documentary proof.

A number of his relatives claim that Marley, whose hit recordings included “One Love,” “Redemption Song” and “No Woman No Cry,” was of Syrian Jewish ancestry.

His estranged father, Jamaica-born Norval Marley, a naval officer, supposedly had Jewish roots, although biographers have hastened to dismiss these claims, saying that they are unverified.

Yet Bob Marley, who died at age 36 of complications from skin cancer, was surely inspired by Jewish history and lore, starting with the Bible.

As a Rastafarian, an adherent of an Abrahamic religion and social movement that developed in Jamaica during the 1930s, Marley was a student of the second book of the Torah, among other Jewish sacred writings. His 1977 song “Exodus” demonstrated as much, voicing the hope that Rastafarians, downtrodden socially and economically in Jamaica, would be led to freedom, as Moses led the Israelites out of Egypt.

Marley’s uplifting words, “Open your eyes and look within/ Are you satisfied with the life you’re living?/ We know where we’re going/We know where we’re from/We’re leaving Babylon/ We’re going to our Father’s land” stirred audiences to empathize with a quest for a new spiritual homeland.

“Exodus” was written at a particularly fraught moment of Marley’s life, after he had survived an assassination attempt in Jamaica in 1976.

An earlier song, “Iron Lion Zion,” again referred to the biblical Promised Land in the context of Rastafarian belief that their restored homeland of liberation and salvation would be Ethiopia.

Marley’s “Redemption Song,” written circa 1979, refers to being sold into bondage: “But my hand was made strong/ By the hand of the Almighty” which is seen as a direct allusion to Genesis 49:24: “…the arms of his hands were made strong by the hands of the mighty God of Jacob.”

His musical transmutations of Jewish history followed charismatically in the footsteps of other Rastafarian-inspired musicians such as Count Ossie, a Jamaican drummer and bandleader; or Desmond Dekker’s 1969 hit “Poor me Israelites,” later retitled simply “Israelites” to refer to the Rastafarian Movement’s links to the Twelve Tribes of Israel.

Bemoaning family separations caused by poverty, Dekker’s song advised Jamaican Rastafarians not to accept social marginalization as an excuse for taking to a life of crime.

In the same year, The Melodians, a Jamaican group, sang a Rastafarian version of Psalm 137 under the title “Rivers of Babylon, a cover version of which by the Euro-Caribbean group Boney M became an international hit in 1978: “By the rivers of Babylon/ Where we sat down/ And there we wept/ When we remember Zion/ For the wicked carry us away captivity.”

So Marley’s creativity was part of an overarching cultural, social and spiritual identification between Rastafarianism, Reggae music and Judaism.

These interactions were explored in the 2010 documentary film “Awake Zion” directed by Monica Haim. “Awake Zion” concludes with an old Rastifarian in Jamaica stating that his coreligionists and Jews “are the same.”

Although many kinds of differences certainly do exist, the striking similarities were part of Marley’s inner essence. So press photos of the singer-songwriter wearing a chai necklace or Star of David ring could hardly surprise fans.

Innate pride in heritage bolstered Marley’s gentle and decorous onstage persona in most songs. Communicating music as wisdom literature, he represented a tradition that saw the Ethiopian emperor Haile Selassie as a descendant of King Solomon, whence his name the Lion of Judah.

Belying the delicacy of Marley’s renditions, Rastifarian worship focuses on an intense reading of the Psalms which includes finding scriptural justification for smoking cannabis in Psalm 104:14, “He causeth the grass to grow for the cattle, and herb for the service of man.”

Marley saw cannabis as an aid to meditation and a holy sacrament. Some researchers, like Rabbi Dr. Yosef P. Glassman, a board-certified physician in internal medicine and geriatrics, have agreed with Rastafarian claims that references to cannabis may be identified in The Bible.

These include Exodus 30:23 and elsewhere where an unidentified substance, kaneh bosem, is described as an ingredient in anointing oil which may have been cannabis, according to some writers.

These arguments were bolstered last year by an archaeological discovery at Tel Arad in the Negev Desert where traces of burnt cannabis were found on limestone altars constructed thousands of years ago.

Rastafarians do not observe this Jewish tradition, if such it was, merely to achieve a mellow mood. If anything, they are more wakeful and energetic than most synagogue congregations in calling down the wrath of God upon iniquity.

Yet Marley’s beatific discourse of self-realization notably avoided the type of vengeance advocated in Psalm 2:9: “Thou shalt break them with a rod of iron; thou shalt dash them in pieces like a potter’s vessel.”

Likewise, Rastafarianism itself developed from an aggressive advocacy put forward by Leonard Howell, a 1930s preacher that the religion’s principles should include “revenge on whites for their wickedness.” Subsequently, Rastafarians adopted 13 commandments instead of 10, among which is the following: “A Rastafarian is a Jew by nature, being a righteous one of principles, dignity and love for God.”

Still another such commandment accepts that all Rastafarians must observe the Ten Commandments. Perhaps one reason Marley sidestepped any communication of aggression was his own affectionate relationships with Jewish friends and colleagues, like Chris Blackwell, a former record producer of Sephardic Jewish heritage, who founded Island Records and thereby launched Marley’s world fame.

“I’ve been connected to Israel from when I was a child. Through my father, my mother, we have a strong belief in the history. If you’ve heard of my father…you’ve heard of Exodus….We are strongly connected to the history of Israel and feel a very spiritual and personal connection to that land and the people of that land. So this is an honor and a blessing and we will continue to have that connection no matter what anybody says or does and continue to support Israel.”

Beyond Ziggy Marley’s marriage to the Israeli artist manager Orly Agai, or the veracity of widely doubted claims to Syrian Jewish origin, Bob Marley drew from Judaism as his fellow Rastafarian musicians did, individualizing the Bible for their own timeless statements.

As the Zimbabwean blogger Masimba Musodza suggested in 2015, “Rastafarian people see the Jewish people as kindred and our two faiths as drawn from the same well. What is also clear is that, as an expression of our faith, Rastafarians stand with the Jewish people and with the State of Israel and this gesture has been reciprocated in no small measures.”

In the music of Bob Marley, a deep connection to Judaism