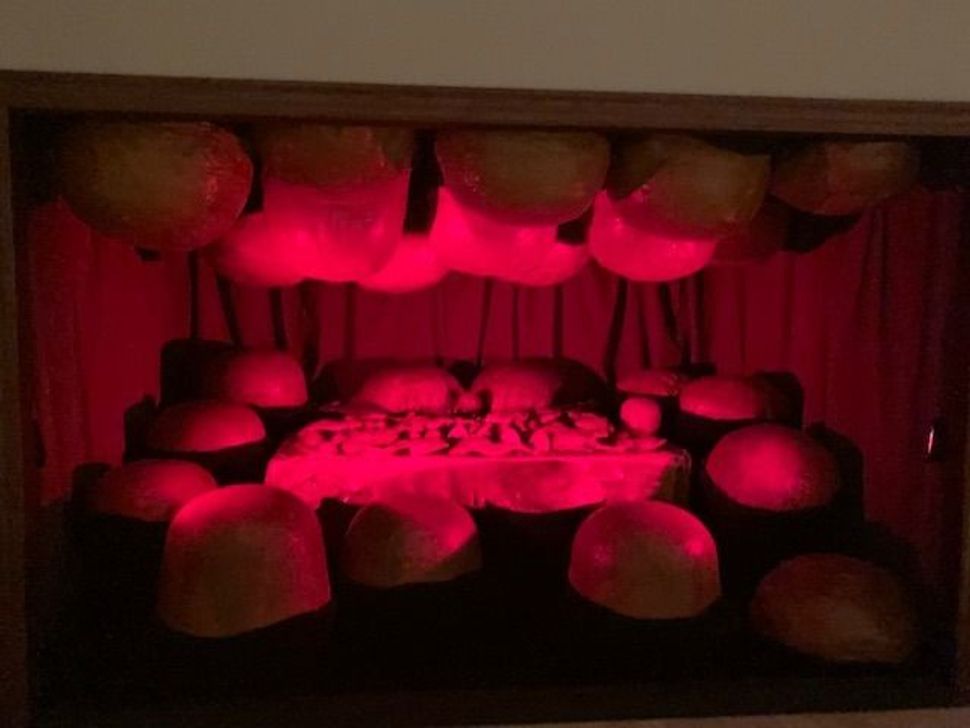 “The Destruction of the Father” up close.

Louise Bourgeois did not trust words; this is what numerous articles and essays about the artist will tell you. That fact is also mentioned at “Louise Bourgeois: Freud’s Daughter,” a new exhibit at the Jewish Museum, which shows more than 50 of the French-born artist’s works alongside pages and pages of musings and notes she wrote while undergoing psychoanalysis with Dr. Henry Lowenfeld — a disciple of Freud’s — for 33 years. 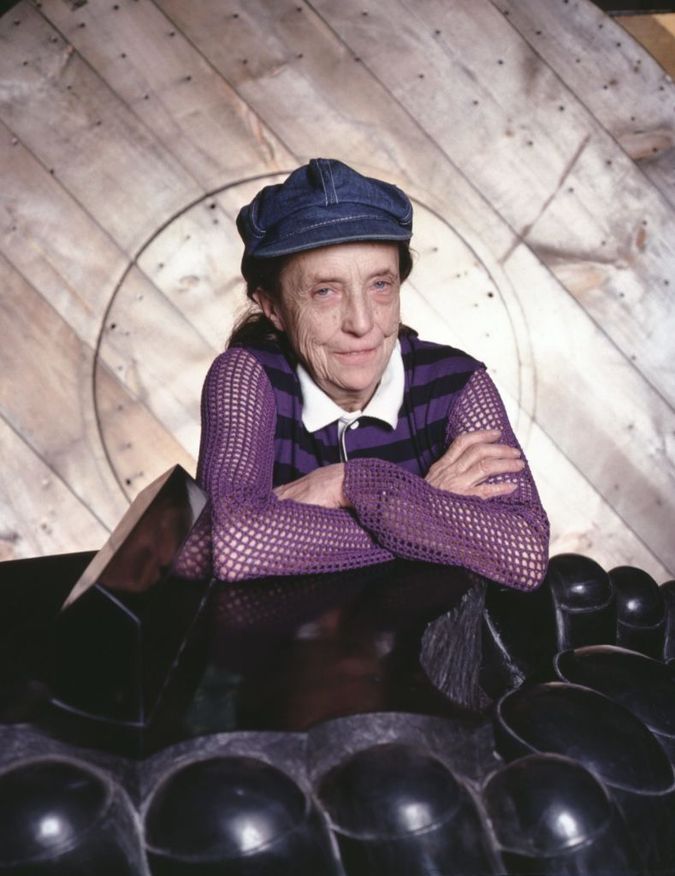 For an artist who was, by her own admission, ambivalent at best about the talking cure — she called it both a trap and a luxury, and said art was “my form of psychoanalysis” — the exhibit certainly puts words front and center, both hers and Freud’s.

During the first half of her career, Bourgeois gave few interviews about her art. However, after her father died in 1951 when she was 50, she fell into a deep depression, stopped making art for several years and began analysis four times a week.

She kept notes on her thoughts regarding her treatment, loose-leaf sheets of paper separate from her personal diary. These sheets were discovered by her personal assistant during her final years, and have since been used for a series of exhibitions, curated by her literary archivist Philip Larratt-Smith, including the new exhibit at the Jewish Museum. 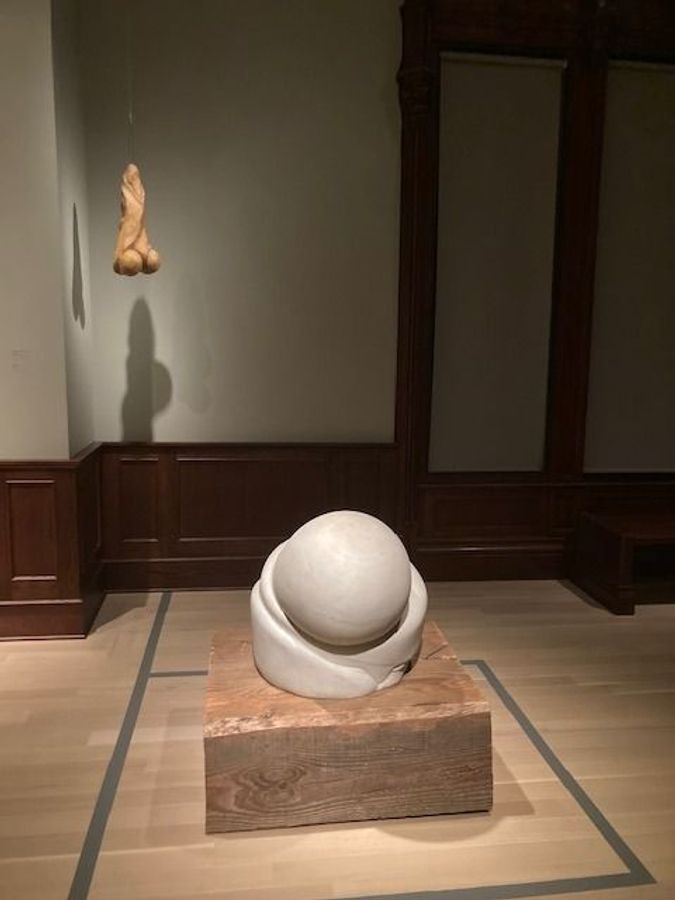 The phallic imagery is hard to miss in “Fillette (Sweeter Version)” hanging in back and “Sleep II” in front. By Mira Fox

In some ways, the Freudian influence in Bourgeois’s work and life seems obvious. She has numerous phallic sculptures, some more abstract and some unavoidably explicit.

You hardly need the nearby pages in which Bourgeois writes of a “realization of a desire to urinate standing up” and how “the Penis envy so very difficult to realize is present” when you are looking at two juxtaposed phallic sculptures. One, “Filette (Sweeter Version)” is anatomically correct (though more than a little oversized and its texture looks desiccated). The other, “Sleep II,” is more gestural, less erect and aggressive, but also enormous and marble.

Similarly, the Oedipus complex, while perhaps less obvious visually, is not far out of mind in one of the exhibition’s central pieces, “The Destruction of the Father.” The piece, which is yawning and lurid, feels both violent and sexual. 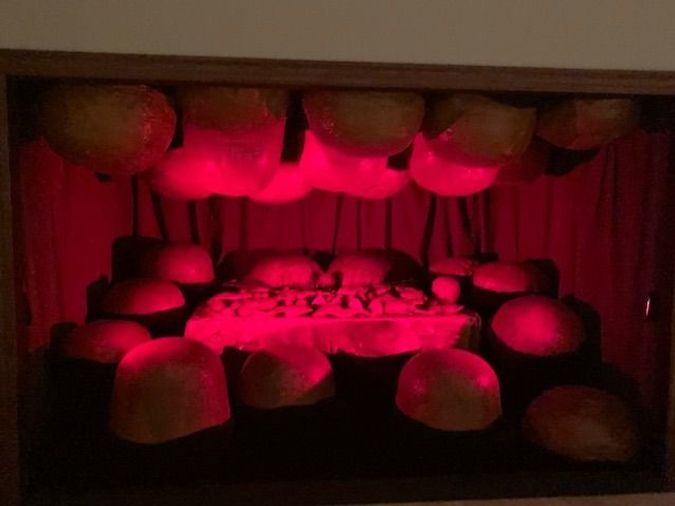 “The Destruction of the Father” up close.

Bourgeois began encouraging this Freudian understanding of her work later in life, particularly during her MoMA retrospective in 1982 — the first for a female artist at the museum. In tandem with the retrospective, she released a photo-essay entitled “Child Abuse,” in ArtForum, revealing details of her childhood, including her father’s affair with her English tutor, Sadie Richmond, which caused her to feel betrayed by both her parents and her tutor.

“Some of us are so obsessed with the past that we die of it,” she wrote. At the end, she explicitly tied her art to her attempt to process her past. “Everyday you have to abandon your past or accept it and then if you cannot accept it you become a sculptor.”

Yet the explanation all seems too pat, too clear a narrative. It feels as though Bourgeois purposefully packaged herself to be so perfectly Freudian that she is almost poking fun at Freud’s didactic frameworks for life and trauma. Her anger at caring for her dying mother while her father had an affair can be boiled down to the Oedipus complex — ah, yes, of course, we’ve heard of that, we understand now. Her obsession with her father is penis envy — yes, see, here are the penises.

Robert Storr, author of “Intricate Geometries: The Art and Life of Louise Bourgeois,” an 828-page biography of the artist, argued in an interview with Book Forum that Bourgeois created a character and narrative to present to the world to protect herself. Yet, he said that the story she built limited viewers even as it informed them.

The art feels like it is of secondary importance to the conceptual framing.

“When you go to an exhibition and you hear people saying what the meaning of the piece is almost before they’ve looked at it, that’s a problem,” said Storr. “When you hear a generalized statement of Freudian method, or Freudian paradigms, which take no particular account of what’s right in front of them physically, visually, and otherwise, that’s a problem.”

At the Jewish Museum’s exhibit, this is exactly the issue. The Freudian element takes center stage; Bourgeois’s connection to Freud is the focus of its title and of much of the wall text. Large text prints Bourgeois’s phrases below Freud’s, but only a handful of individual sculptures get specific mention. The art feels like it is of secondary importance to the conceptual framing. 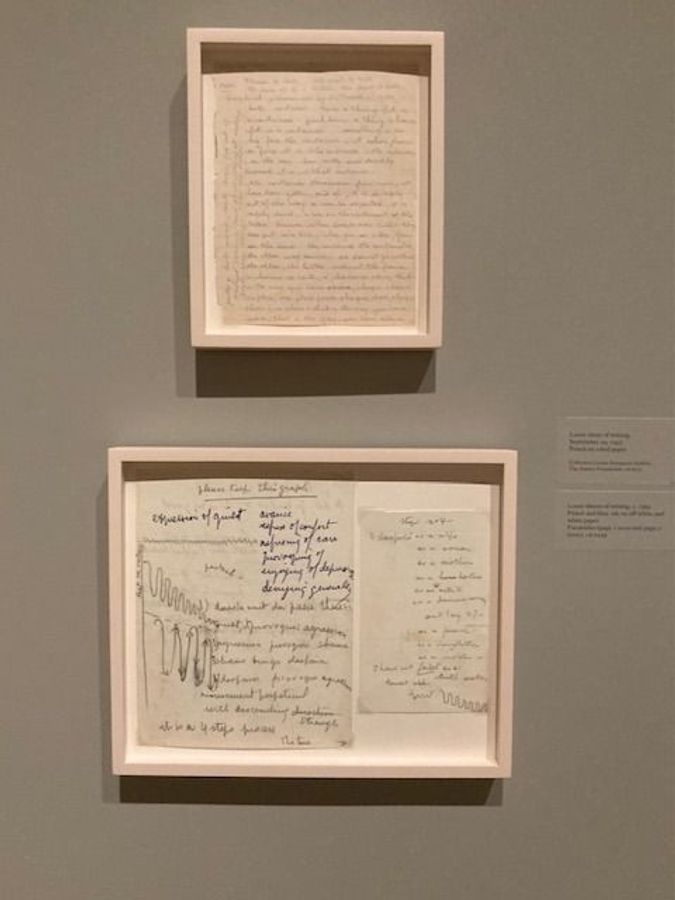 Pages of Bourgeois’s psychoanalytical notes, in mixed French and English. By Mira Fox

As curator Larrat-Smith said in the exhibit’s press release, Bourgeois’s psychoanalytic writings “do not explain or demystify her art” and complicate the simplistic Freudian explanation of her art that she offered. But, in the same quote, he also reemphasized the central importance of the Oedipus complex for Bourgeois.

The actual fragments of Bourgeois’s writing adorning the walls are enigmatic, nothing so clear as the narrative the artist more purposefully offered the world, nor as clear as the story laid out by the wall text. But they nevertheless make it difficult to encounter the art itself. If nothing else, it is simply a lot to read.

The exhibit includes some sizable and famous pieces, such as the largest of Bourgeois’s Cell installations, “Passage Dangereux.” The sprawling caged structure, large enough to walk through (though it is closed off) has several offshoots all filled with objects, and it obviously dominates the space — it’s enormous. And “The Destruction of the Father” dominates its room. A room devoted to Bourgeois’s mother features a large crypt-like piece with cupping jars, “Ventouse (Cupping Jars).”

But other rooms cram the artwork together on stacked shelves in which it is difficult to engage with any particular piece on its own; the sculptures and drawings are laid out more like historical artifacts, a case of bronze arrowheads and rock tools from ancient times instead of the strange and abstract pieces of art they are.

How much should an exhibit tell the viewer what it is they’re seeing?

Bourgeois undoubtedly used her art to explore her past, her trauma and her unconscious. Her father certainly played a large role. And knowing the events of her life does add to the experience of her artwork, which is otherwise sometimes startlingly crass — such as several figures lying in the missionary pose, with prominent genitals— and other times impenetrably abstract. 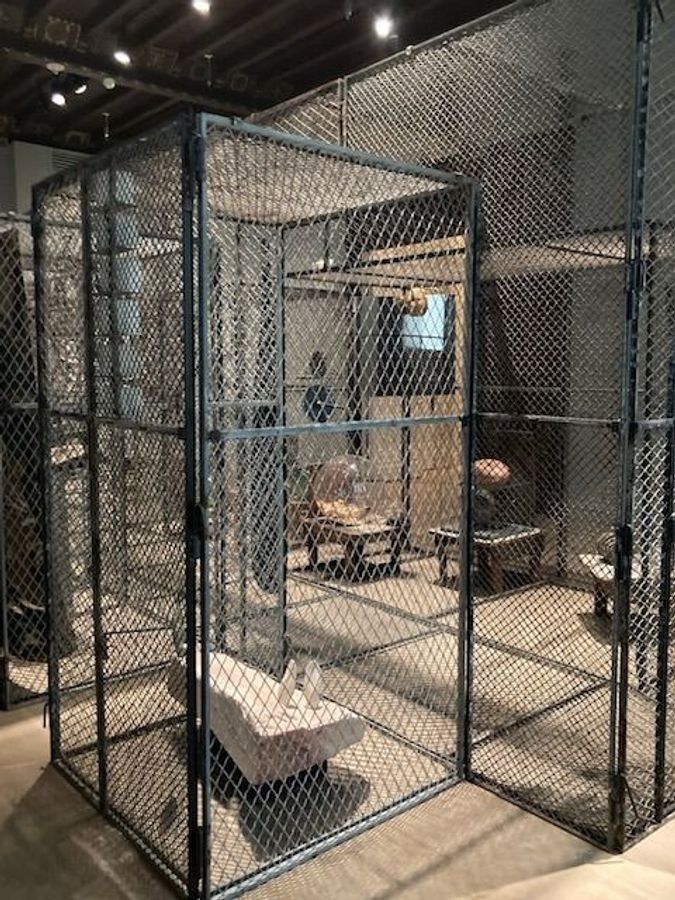 But there’s a question of balance. How much should art be allowed to stand on its own, and how much should an exhibit tell the viewer what it is they’re seeing, how to understand it and what it means?

Bourgeois changed her own explanations of her art over time, and continued to create for her entire life. If her art was, as she said, her form of psychoanalysis, then perhaps she was still working through her story. Maybe she didn’t fully understand herself — or her art. So how can we claim to explain it?

”Louise Bourgeois, Freud’s Daughter” opens May 21 and runs through September 12 at the Jewish Museum on the Upper East Side.