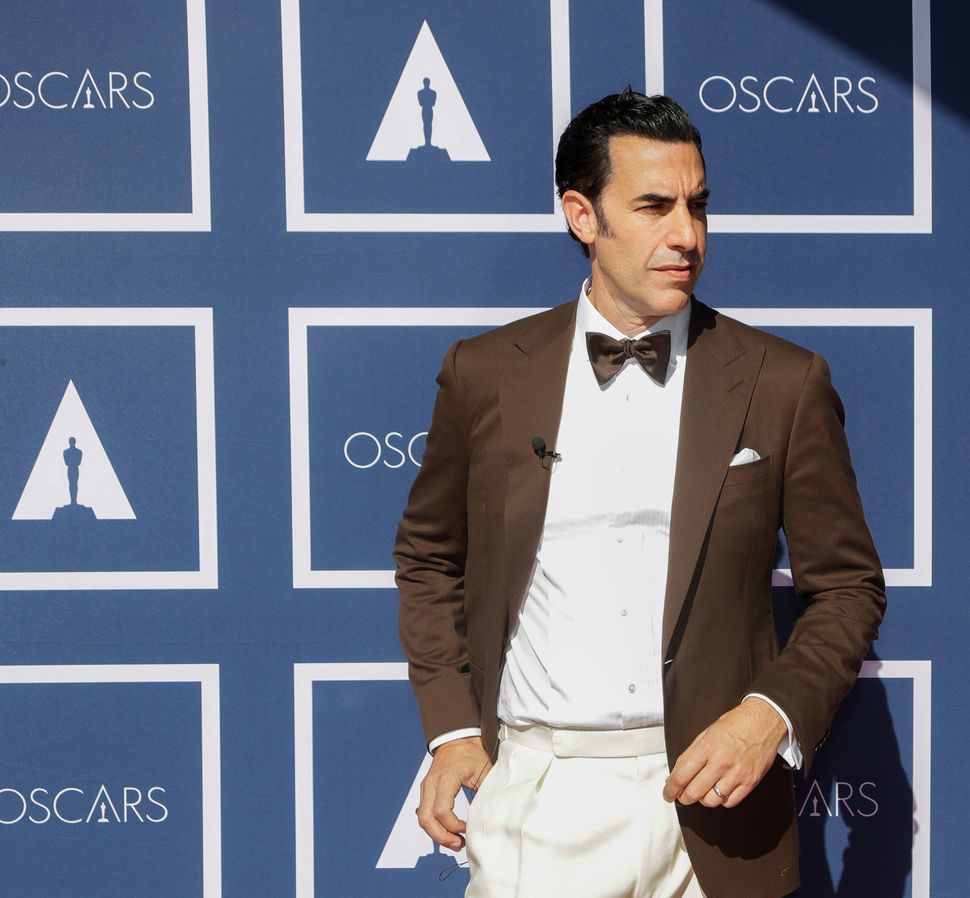 For a while now, Sacha Baron Cohen has had an issue with juggling multiple personas.

On the one hand, as Borat, Bruno and his coterie of characters on “Who is America,” he is a cartoonish sounding board for America’s worst qualities. On the other, he is an increasingly serious out-of-character activist, a full-throated opponent of social media companies’ failure to curb disinformation. The center between these two poles often has trouble holding, and his solution appears to be a clean break. He announced recently he was retiring Borat, but not before releasing an Amazon special, “Borat’s American Lockdown,” out today on Prime Video.

On its own, the 35-minute special, packaged like an A&E reality show, is a collection of unused footage from “Borat Subsequent Moviefilm,” taken from his five days living with two Trump supporters, Jim and Jerry. The special aims for comedy — though there isn’t much in the way of new jokes — but it also features an icon of an Illuminati pyramid every time Jim or Jerry spout conspiracy theories. Those conspiracies aren’t left standing. Six shorts collectively called “Debunking Borat,” each devoted to challenging one of Jim and Jerry’s a false claims, follow, and will autoplay if you don’t stop them.

The goal may be to lure people in with comedy and then hit them with facts, but whether those who most need Baron Cohen’s message will hear it seems like a crapshoot. It certainly doesn’t help that they’re still the butt of the joke.

In the “American Lockdown” special, Jim and Jerry witness Borat’s usual shtick — complete with conspicuous Alexa product placement and aerobics with a strap-on. As in the film, the pair also push back against their guest’s pseudoscientific “owner’s manual” for his daughter. How Jim and Jerry’s can refuse to believe that fetuses develop in a woman’s head even as they willingly accept right-wing claptrap is murky, and while they ultimately come off as sympathetic, both men are introduced as weirdos who let a stranger stay with them during a pandemic.

Even before that, a disclaimer card warns of conspiracy theories to come, while expecting that “the vast majority of” the special’s viewers don’t believe them. Already there are presumptions and judgments that could have believers in QAnon or Soros-funded protests flipping off their screens. The message seems clear: This isn’t for them.

This messaging makes the helpful shorts for “Debunking Borat” jarring and paternalistic. Each segment has Jerry and Jim sitting down with experts who explain why everything from the canard of George Soros’ collaboration with the Nazis to microchips in the COVID vaccine isn’t true. Seeking to educate them — and one hopes some curious viewers — their tone couldn’t be more different than that of the mockumentary.

Largely missing from “Debunking Borat” is Borat. Baron Cohen introduces each segment as himself, and then another voice’s narration (marred at times by its deadly serious parroting of Borat’s broken English) explains how conspiracy theories metastasize.

They are impressively effective explainers, at home with a Vox-style video. Their approach removes comedy from the equation — despite the comedic trappings that prompted them. As a result, each installment is pretty absurd. Jumping from Borat holding an egg in his butt to a reporterly primer on blood libel later in your queue makes for strange viewing.

Yet there’s a lot to commend this effort for. “Debunking Borat” is clear-headed and employs historians and experts on science and far-right online communities who carefully outline why and how these beliefs spread. If they didn’t stem from a “Borat” production, they wouldn’t raise any eyebrows. But as such, and even despite Baron Cohen’s efforts to fade into the background, they reveal a tension between his role as a social satirist trickster — who himself misinforms many about Central Asia — and a man committed to facts and fighting bigotry.

Hanging up Borat, Baron Cohen appears to have made his choice, but the transition is an uneasy one. He may never be an uncomplicated messenger until he fully divorces his persona from the work. As the replies to his recent tweet about antisemitic hate can attest, many aren’t ready to trust his activist bona fides after his years of playing the clown.

Those who celebrate the Holocaust aim to perpetuate another.#StopHateForProfithttps://t.co/RMWwBZGFiX

The larger test will be if Baron Cohen, aided by experts, can at least convince people they’re wrong in their convictions. Jim and Jerry appear to be early test cases. They agree to some things, but for the most part remain unmoved. Alternative facts aren’t going anywhere, even if Borat is.