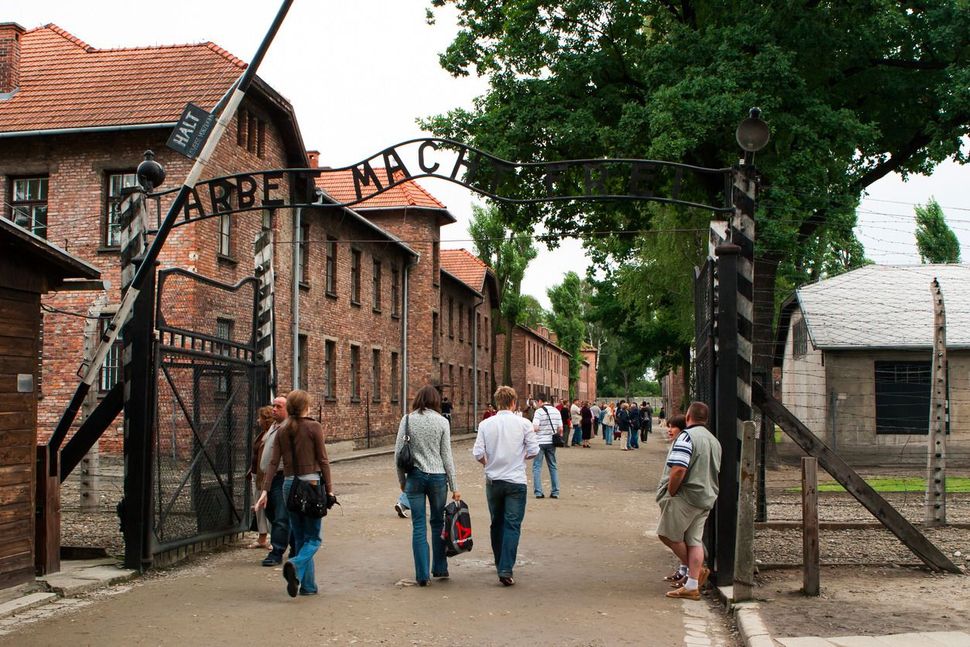 On a recent segment of “The Today Show,” a cadre of well-coiffed hosts discussed the life of Eddie Jaku, a 100-year-old Holocaust survivor and the author of “The Happiest Man on Earth,” a memoir about his imprisonment in Auschwitz. Grainy photos of concentration camp prisoners alternated with clips from an interview with Jaku and videos of him reading some of the most stirring lines from his book: “Through all my years I have learned this life can be beautiful, if you make it beautiful.”

“What a message in this time, as we’re in a state of recovery,” one panelist sighed, presumably alluding to the coronavirus pandemic. “You see what this man endured?”

“If he can have love in his heart, surely everyone can,” another chimed in. 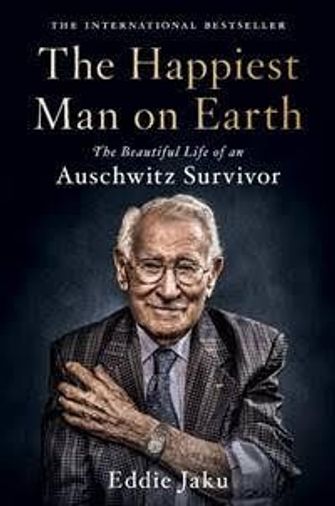 “The Happiest Man on Earth” is not quite as unequivocally uplifting as interviews like this (not to mention its title) would suggest. In brisk prose, Jaku recounts losing his parents to the gas chambers of Auschwitz, staying alive through a combination of luck and cunning and emerging into a postwar Europe still rife with antisemitism. Although coverage and promotion of Jaku’s book focus on his determination to make a “beautiful” life, its plot shows how little control he had over what happened to him.

The packaging of Jaku’s story as inherently life-affirming speaks to a broader cultural phenomenon: our desire to fashion Holocaust history into self-help stories whose value is predicated on the idea that survivors could, and did, make the “right” choices. Such framings conform to powerful American notions of 20th-century history; they give readers palatable parables about events that may seem too distant or distressing to contemplate; and they provide a wide platform to survivors who wish to speak out. (“The Happiest Man on Earth” is already a bestseller in Australia, where it was originally published.) But editorial decisions like the ones that went into Jaku’s memoir also ensure that many of the most accessible stories about the Holocaust give a reductive impression of what survivors — and victims — really experienced.

This framing of Holocaust storytelling is not new — in fact, it originated soon after the Holocaust ended. When I asked Pam Nadell, the director of American University’s Jewish Studies program, about our addiction to uplift in Holocaust narratives, she pulled out a 1952 edition of “The Diary of Anne Frank,” the first to appear in the United States. The book included an introduction by Eleanor Roosevelt that praised Frank’s “ultimate shining nobility” and stressed its relatability: “These are the thoughts and expressions of a young girl living under extraordinary conditions, and for this reason her diary tells us much about ourselves and our own children,” she wrote.

While memoirs like Elie Wiesel’s “Night” struggled to find American publishers, “The Diary of Anne Frank” became a Pulitzer Prize-winning play that ended not with her terrible death at Bergen-Belsen, but with one of her diary’s most optimistic lines: “In spite of everything, I still believe that people are truly good at heart.”

Writing in 1997 on what would have been Frank’s 68th birthday, Cynthia Ozick argued that the creation of an edifying feel-good tale out of Frank’s suffering amounted to a kind of literary malpractice, transforming her diary from a “painfully revealing” document to a “partially concealing” one. It would have been better to burn it, she concluded, than to adorn the covers of its various editions with bromides like “a song to life” or “a poignant delight in the infinite human spirit.”

That redemptive storyline, for however little redemption Frank actually saw, fit right in with widespread American attitudes at the end of World War II, said Sara Horowitz, a professor of Jewish studies at York University who focuses on literature. Americans saw their soldiers as heroes who had rescued Europeans from a remote and bloody conflict, so they were primed to layer over that story “the idea of survivors triumphing over evil.”

In the decades after the Holocaust, Horowitz added, commercial publishers may have had a vested interest in promoting uplifting survival stories: In doing so, they were both catering to the broadest possible reading public and meeting the psychological need to make meaning out of horrific events.

“If you look at the Holocaust without that triumphant, redemptive story arc, you have to grapple with the randomness of what happens to people,” Horowitz said. “The fact that good doesn’t always triumph over evil, that wonderful, moral, warm, fabulous, heroic people don’t always triumph over the forces that are poised against them. Who wants to contemplate that?” 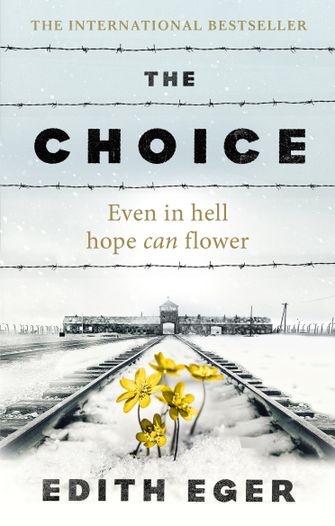 Image by Simon and Schuster

Who indeed? The book blurbs to which Ozick objected wouldn’t feel at all out of place in some of the latest Holocaust literature. The cover of “The Choice,” a 2017 memoir by the Holocaust survivor and psychologist Eva Eger, features the plucky maxim “Even in hell, hope can flower.” In the book’s foreword, Philip Zimbardo characterizes Eger’s survival as a decision, writing that ”Despite torture, starvation, and the constant threat of annihilation, she preserved her mental and spiritual freedom.” To him, this supposed decision is the basis of the book’s educational value: He concludes that “For all of us who suffer from the everyday disappointments and challenges of life, her message inspires us to make our own choice and find freedom from suffering.”

This insistence on individual choices seems perverse given the systematic degradation and random violence Eger recalls in the memoir: She sees her mother die in Auschwitz, survives through a series of lucky coincidences and narrowly escapes sexual assault by an American soldier, one of her supposed liberators. Eger herself is fairly explicit about the lack of options available to her as a concentration camp prisoner: While she stresses the importance of maintaining hope, for her the titular “choice” comes at the end of the war, when she musters all her psychic resources to begin anew. But the book’s editorial framing obscures that distinction — Library Journal, for example, observed loftily that the book “bears witness to the strength of the human spirit to overcome unfathomable evil.” Such comments imply the fact of survival is in and of itself both a choice and a virtue.

This framing should give us pause, and not just because it implies that the Holocaust victims — who outnumber survivors by far — lacked sufficient determination to stay alive. Survival in concentration camps depended much less on individual decisions than predetermined factors like age, physical health and location, not to mention luck. Within a system designed to eliminate autonomy and rife with random violence, it was often impossible to make rational choices about survival. The Holocaust scholar Lawrence Langer, for example, describes a survivor who arrived at a concentration camp and was sorted into one line with his brother, while their parents stood in another. The survivor sent his brother to stand with the rest of the family, thinking they should be together, only to later realize that all three were sent to the gas chambers.

In response to widely accepted ideas about the “decision to survive,” Langer coined the term “choiceless choice” to articulate the scenarios faced by concentration camp survivors and to distinguish them from the notion of choice as we experience it in everyday life. To find instruction or inspiration in choices that weren’t really there, as the editorializing around many contemporary Holocaust memoirs encourage us to do, is to collapse that distinction, presenting genocide as an extension of the vagaries of modern life rather than another reality altogether.

Primo Levi, one of the Holocaust’s earliest and starkest chroniclers, gives voice to the concept of “choiceless choice” in his 1983 essay “The Gray Zone.” New arrivals at Auschwitz, he writes, expect to encounter a microcosm of the outside world, or at least some solidarity from fellow inmates; instead, they find “thousands of sealed off monads” engaged in “a desperate covert and continuous struggle.” For Levi, the horrible choices, or “struggles,” inherent in concentration camp life pitted prisoners against each other and eroded their humanity, without ever guaranteeing survival.

Levi’s writings lionize nobody, and the modern reader will find in them no advice on personal conduct. But he presents another kind of lesson, one that’s as relevant as it is unsettling: a demonstration of the ease with which totalitarian governments can dismantle social norms and create worlds totally distinct from our own, worlds in which ideas of choice simply do not apply.

I couldn’t help thinking of Levi’s monads when I looked at the cover of “The Happiest Man on Earth.” On it, Jaku poses with a gentle smile spreading across his weathered face, one arm crossed over his chest to display the number tattooed on it. It’s a pose of triumph, but it’s also a disclaimer, reassuring readers that the Holocaust is but a chapter in a longer story of human decency and freedom, not an argument against that story. Things were bad, the image tell us, but now they’re just fine.

We shouldn’t require survivors to give us such assurances.