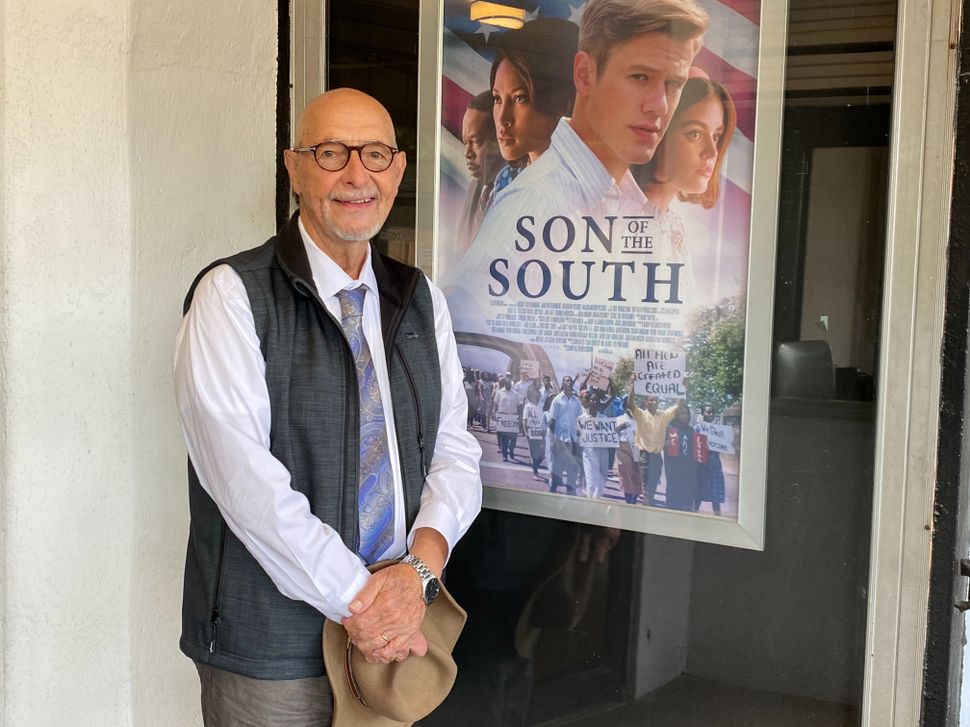 Witnessing History: Former SNCC field secretary Bob Zellner stands next to a poster of “Son of the South,” a film about his work in the Civil Rights Movement, at a screening in Montgomery, Alabama. The screening was held on the 60th anniversary May 20 of the day Klan members attacked Freedom Riders in Montgomery, an incident witnessed by Zellner that led him to join the Civil Rights Movement full-time. Photo by Julia Cheng

MONTGOMERY, Alabama — The funniest line in the true-life story behind the Spike Lee-executive produced Civil Rights movement biopic, “Son of the South,” is in Yiddish. But it didn’t make the final cut.

That’s because the Jewish half of what could have been a hilarious-yet-gripping buddy film was largely written out.

In real life, the protagonist, Bob Zellner and his pal, Chuck McDew, fit a seemingly predictable pattern: One is white, the other Black. One is Jewish and from the North, the other Southern and the son of a Methodist minister.

Those with a casual knowledge of the movement may be misled by the stereotypes of names and geographies to assume that Zellner is the Northern Jew and McDew a Black Southerner. But they would be mistaken. It’s Zellner who’s “The Son of the South” — a white preacher’s kid from Alabama and the grandson of a Klansman. Left largely unexplored is McDew, Black and Jewish from Ohio and chairman of the Student Nonviolent Coordinating Committee in its earliest, and most dangerous, days, who died in 2018. 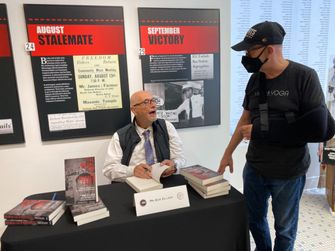 Director and Inspiration: Bob Zellner autographs his book, “The Wrong Side of Murder Creek,” while chatting with Barry Alexander Brown, the director of “Son of the South,” a film executive produced by Spike Lee about Zellner’s work in the Civil Rights Movement. Zellner, of Alabama, is the grandson of a Klan member. Photo by Julia Cheng. By Julia Cheng

Zellner is very much still with us, and was present for a recent screening of the film in Montgomery, as he was 60 years to the day earlier. On May 20, 1961, a busload of Freedom Riders arrived to a waiting mob at Montgomery’s Greyhound Station, now the Freedom Rides Museum. Two of those passengers, Catherine Burks-Brooks and Bernard Lafayette, along with later Freedom Rider Earnest “Rip” Patton, were aboard a replica bus arriving at the exact moment — 10:23 a.m. — that they had 60 years earlier. Meeting them then and now was Zellner.

The first time, he witnessed the Klansmen and their sympathizers mercilessly beat the Freedom Riders in a melee made possible by the pre-arranged absence of the Montgomery police. The attack would lead Zellner, then a student at nearby Huntingdon College with an emerging interest in the Black freedom struggle, from an observer to a movement participant. Soon after, he was appointed one of the first field secretaries — and certainly the first Southern white one — of the nascent SNCC.

Yet he was not following the trope of the “white savior”; a charge directly addressed, and discounted, in the film, as well as in Zellner’s 2008 autobiography, “The Wrong Side of Murder Creek: A White Southerner in the Freedom Movement,” co-written with movement scribe Constance Curry. In his book, Zellner writes that he’s joining the movement not just because it’s the right thing to do, but also because it’s necessary for white people to do, after becoming convinced that the ills of segregation hold back not only Black people but white.

That’s part of what impressed McDew, then SNCC’s chairman, to hire him.

“Zellner was perfect. If we had wanted to create him, we couldn’t have done a better job,” McDew wrote in his autobiography, “Tell The Story,” released posthumously last year. “I liked him because he was the perfect good ole white boy, a teetotal white country boy, with the accent and the background of the real rural South. He sounded country and he looked country. He was untouched by the civilized world.”

In the movie treatment, however, McDew is less expansive. Meeting at a ramshackle one-room office in Mississippi, he tells Zellner (played by “MacGyver” reboot star Lucas Till) that “everything you need is in that briefcase” before lighting out to parts unknown and from the rest of the film. In real life, the two were inseparable, enduring repeated beatings, arrests and jailings. In one, a white jailer puts them on display to curious tourists, one of whom asks them to “say something in communist.” “Kish mir in tuchus,” McDew responded famously.

Alas, that’s the line left out of the movie, with McDew’s character cut out at that point. The film does convey the real dangers Zellner experienced, including a near-lynching, as well as his complicated relationship with his Klansman grandfather (Brian Dennehy, in his last major role), who threatens to himself shoot Zellner if he continues his activism, while at the same time making arrangements for a family dinner. 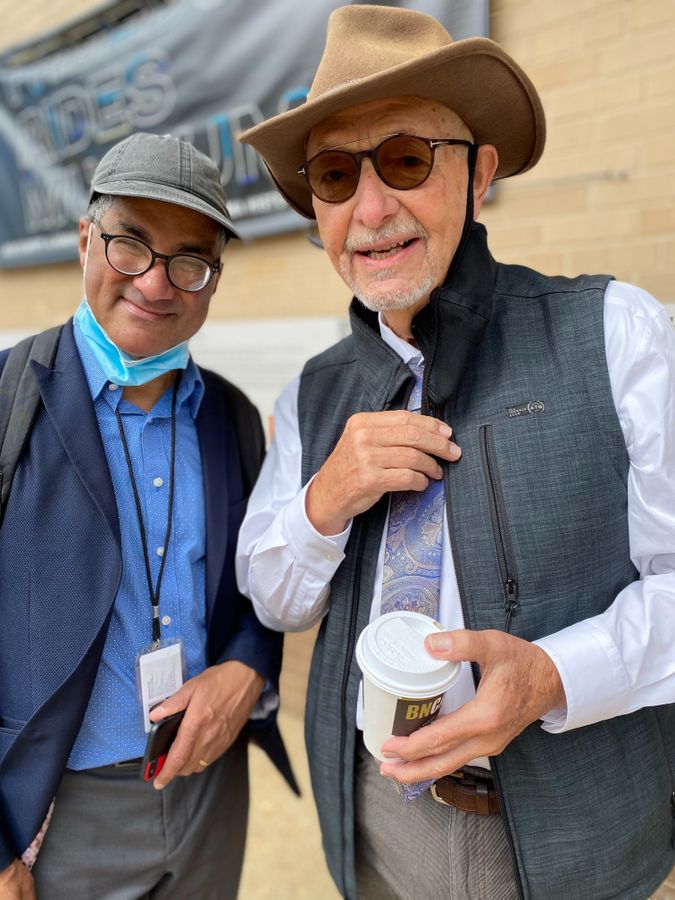 “It’s funny,” director Barry Alexander Brown, who was born in England and raised in Montgomery, said of dichotomies like that and of his adopted state of Alabama in general. At the screening, Brown explained his goal was to make as authentic an Alabama film as possible; a feat harrowingly achieved in the bus station scene shot at the actual site of the attack.

So again, does a white Alabaman directing the story of another white Alabaman smack of saviorism? Not exactly, if you consider that neither are typical white Alabamans. While not quite holding a Black card, Brown was the editor on “BlacKkKlansman” and has collaborated with Lee for decades, going back to “School Daze” and “Do the Right Thing.”

At heart, “Son of the South” is a coming-of-age story with the Civil Rights Movement as a backdrop. Far more dramatic incidents detailed in Zellner’s book are left unexplored, such as his narrow brush with death in Danville, Virginia, even more dangerous that those he faced in the Deep South. Likewise, as with all based-on-a-true-story movies, facts that didn’t quite fit a cinematic narrative are left out or massaged, concerning McDew’s character in particular. The script called for him to needle Zellner about being white and regard him with suspicion until Zellner proved himself, something the real McDew didn’t agree to because it just wasn’t true, both Brown and the real Zellner told me. As a result, those qualities were ascribed to another character and McDew’s role significantly diminished.

Still, it’s as good a telling as you ever get from a major motion picture, capturing the bona fides Brown aspired to achieve. Maybe because it concentrates on a personal journey and an authentic Alabama one, it’s free from the stilted, hold-your-hand language of offerings such as Ava DuVernay’s “Selma,” in which Martin Luther King is told “John Lewis from the Student Nonviolent Coordinating Committee is here to see you,” with King’s aides pronouncing each syllable in a slow staccato as opposed to a quick “Snick” that they more likely would have said, and which mainstream audiences wouldn’t have likely understood.

Also, at the Montgomery screening, both audience members and Zellner himself noted that “Son of the South” ends abruptly, with the movement’s battles, and Zellner’s own, far from resolved.

That may lead to a TV series, Zellner said.

I hope it does, and if so, I have a suggestion: Bring back the character of McDew to make a buddy show, about a Black Jewish guy from the North teamed up with the white grandson of a Klansman, working for SNCC in the most dangerous days of the movement. And don’t worry about the savior bit: My bet is that McDew’s character will steal the show.