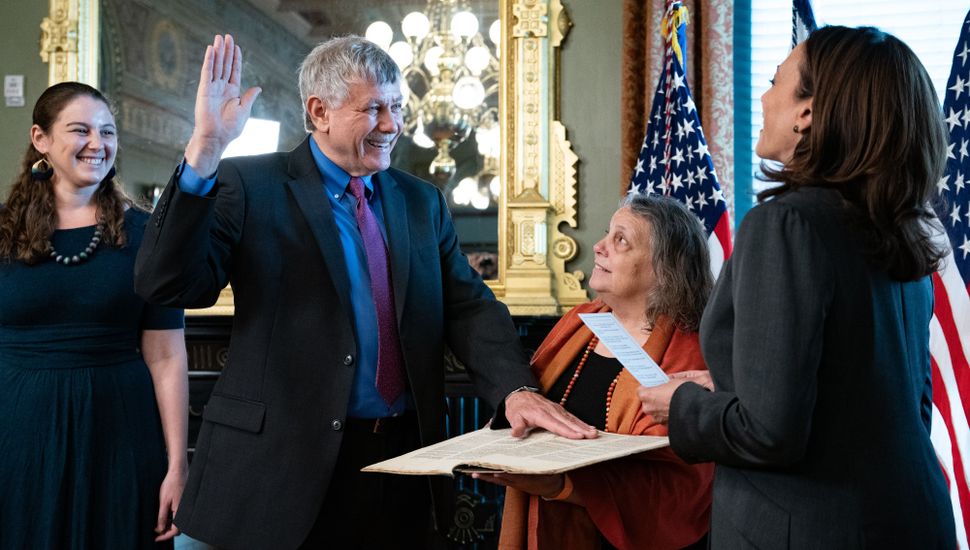 The White House’s new science adviser was sworn in Wednesday using a copy of Pirkei Avot, or Ethics of the Fathers, from the year 1492 — a pivotal moment in Jewish history and world history.

The choice delighted Judaica librarians and scholars around the world.

Dr. Eric Lander, the director of the White House Office of Science and Technology Policy, had not thought about which book he would use until Vice President Kamala Harris’ office called to ask.

“I confess I had not thought about the question,” Lander told Religion News Service. “But once they asked, I had to think deeply about it, because when you choose a text you’re choosing values, or history, or other meaningful things.”

The question prodded him to consider the choice as “a statement of what’s in my mind and what’s in my heart” as he begins his new role, Lander said.

Lander said he attends Jewish services but that his own Judaism is “complicated to describe.” What he did know for sure, after conferring with his family, is that he wanted a text that reflected the idea of tikkun olam, or repair of the world.

That led him to the Mishnah, and its famous precept of lo alecha hamlacha ligmor, or “it is not required that you complete the work” – “ but neither may you refrain from it.”

This is where it gets interesting. Lander turned to the Library of Congress catalog for a copy of Mishnah — but he found something unexpected. It was a 13-page volume containing the Pirkei Avot, with a publication date of 1492.

The catalog entry, which can be viewed online, reads: “Chapters of the Fathers with commentary by Moses ben Maimon (Maimonides). Naples: Joshua ben Solomon Soncino, Iyyar 11, 5252 May 8, 1492.”

That year, 1492, was the year of the expulsion of all Jews from Spain, as well as the year Christopher Columbus set sail.

Europe in 1492 was home to two Ferdinands who shared a family connection and wielded immense power. In Spain, King Ferdinand and Queen Isabella are forever connected with the Spanish Inquisition, in all its torture and horror; at the same time, the other Ferdinand, in Naples, accepted Jewish refugees.

That story of tolerance at a time of danger moved Dr. Lander.

“The world has experimented with intolerance, with the view that everybody has to think like I think, worship like I worship,” Lander told Religion News Service. “(But) the world experimented in 1492 with tolerance — with the idea that we would have a diversity of people and perspectives. I think the lessons of the 1492 era are lessons for today: coming together and making our diversity an incredible asset for this country going forward.”

It’s hard not to be moved by the physical descriptions in the Library of Congress catalog entry, detailing what the text looks like.

“This fragment is bound in nineteenth-century brown marbled boards with green and gilt end-papers of a Florentine design,” the catalog entry notes. “The paper is crisp and well-preserved apart from what may be water stains on the bottom of the last nine leaves, and a small worm-hole at the very edge of a few leaves in the middle part of the fragment. There are no hand-written remarks or signs of censorship.”

Dr. Lander asked to see — and then used — the original, assisted by Ann Brener of the Library of Congress.

The Library of Congress has a distinguished collection of incunabula — or books printed in 1500 or before. Its collection of Jewish texts is housed in the African and Middle Eastern Division. Members of the public can make an appointment, fill out a form, and see these invaluable centuries-old books, and I was privileged to visit and write about the collection for the Forward.

Something I learned in person is how many books from this era had censors’ marks; the Pirkei Avot used by Lander did not have such marks, and that is noted in the catalog. At that time, Christian censors read Jewish books and marked them, and being in possession of an uncensored book could mean losing citizenship.

At the Library of Congress, I was moved to see books with key passages cut out by censors, many of whom were Jews who converted to Christianity.

The question of which book to choose for a swearing-in — and why — excited librarians all over the world.

Michelle Margolis Chesner, Judaica librarian at Columbia University, pointed out that the Library of Congress had other similar holdings that may have made a good choice. She tweeted:

“Interesting that he chose a version of Mishnayot with Pirkei Avot, rather than the standalone 1485 version that LC also has: But hey, I’m satisfied with Hebrew incunabula getting any kind of airtime.”

Others active on Jewish Twitter wondered aloud about whether Pirkei Avot was a good choice for a government official. Sure, there is the famous precept aizehu chacham, halomed michol adam — “Who is wise? He who learns from every person.”

But Rabbi Josh Yuter went with Pirkei Avot 2:3, which describes “ruling authorities” or government officials as self-interested, cautioning that they “do not befriend a person other than for their own needs.”

For the most part, though, Jewish Studies scholars and librarians were simply thrilled to see a 1492 Pirkei Avot as a national news story, and spent hours today sharing clips of Hebrew incunabula in action.

Here’s one example from Haim A. Gottschalk, Hebraica-Judaica cataloger at the Library of Congress, who works with incunabula.

“I love this story,” tweeted Joel Berkowitz, Director of the Sam and Helen Stahl Center for Jewish Studies and Professor of Foreign Languages and Literature at the University of Wisconsin-Milwaukee.

I couldn’t resist adding: “Me too.”

Aviya Kushner is The Forward’s language columnist and the author of WOLF LAMB BOMB (Orison Books) and The Grammar of God (Spiegel & Grau). Follow her on Twitter @AviyaKushner