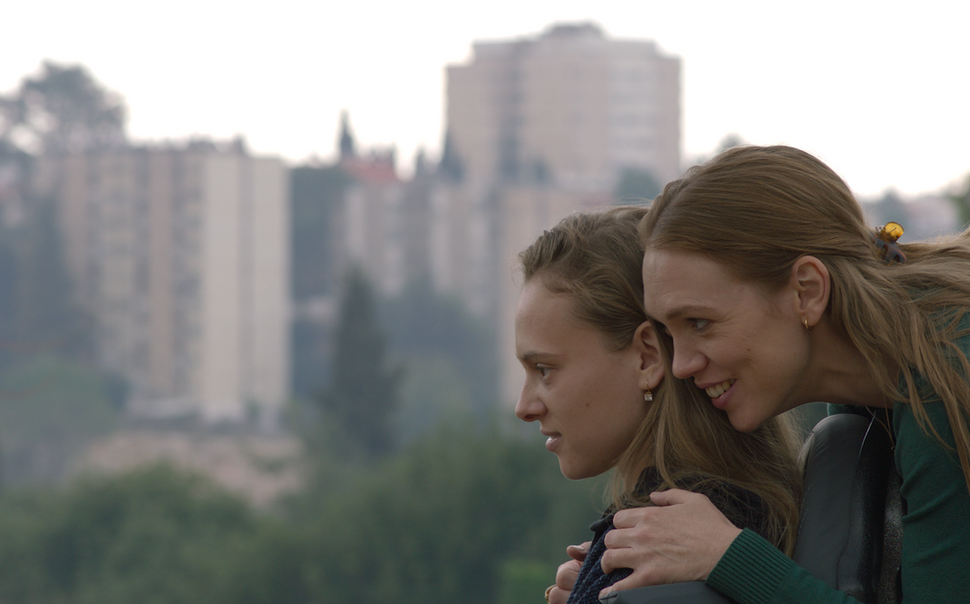 Shira Haas and Ruthy Pribar wanted to make sure I wasn’t filming our interview.

That’s because they were curled up on a couch in Pribar’s Tel Aviv apartment, sharing the same blanket. They may be two of the Israeli film industry’s most exciting up-and-comers, and they certainly spent much of the last year racking up awards at virtual film festivals while the rest of us baked sourdough, but they looked like old friends recovering from a long sleepover.

The chatty, informal vibe belied the big career moment that Haas, 26, and Pribar, 39, are very rightly enjoying. We spoke via Zoom as they prepared for the American debut of “Asia,” a film directed by Pribar and starring Haas, at the Tribeca Film Festival. Known for her roles in the Netflix blockbusters “Shtisel” and “Unorthodox,” Haas is now cementing her status as a household name. Meanwhile, Pribar is enjoying a remarkably successful directorial debut after working as a film producer and editor for over a decade. When I asked if they had any tourist destinations in mind for their New York sojourn, they demurred. Mostly, what they want is for you to see their film. 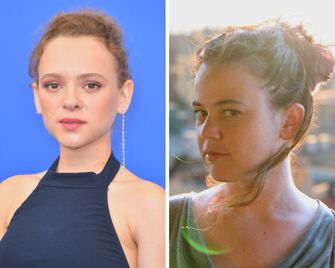 A moody drama set in Jerusalem, “Asia” is a story of two women. Its titular character (played by Alena Yiv) is a Russian immigrant and single mother struggling to get by as a night shift nurse. Her daughter, Vika (Haas), is a teenager burdened by all the usual troubles of adolescence — plus an unusually aggressive degenerative disease. Their relationship, initially tense and gladiatorial, develops into something like a partnership only as Vika’s health deteriorates beyond repair.

When it comes to the depiction of terminal illness, “Asia” flounders. Neither the exact nature of Vika’s disease nor the reason for her sudden decline is ever explained, making the film’s central plotline too vague and unspecific to feel like an authentic portrait. Yet the film excels in evoking the ecosystem of paid and unpaid caregiving that undergirds every society, and the uneasy intimacies that arise when we pay people to perform emotional labor. Asia herself demonstrates a tenderness with her elderly patients that she can’t access when it comes to her own daughter. When she’s not working at the hospital, she picks up extra cash bathing an elderly woman in her building and befriends her full-time caretaker, a Filipino guest worker whose decision to move to Israel for better pay entails a prolonged separation from her own daughter. Then there’s Gabi (Tamir Mula), a gentle hospital attendant Asia hires in the misplaced belief that she can arrange a teenage fling for her disabled daughter.

I asked Haas and Pribar about the challenges of filming “Asia,” their quarantine routines, and their favorite ways to unwind. (Spoiler: They don’t.) The following conversation has been edited for length and clarity.

Irene Katz Connelly: I want to ask you a little bit about how you’re working right now, since COVID has messed with everyone’s routines. What’s the first thing you do when you wake up?

Haas: Well, first of all I wake up very delayed, so I immediately turn off my alarm. I hear the first sound and I’m like, “Enough.” I try not to touch my phone when I wake up, but sometimes it’s challenging.

Pribar: I don’t need an alarm, because I have a very small and cute alarm that wakes me up every day at 5:30 a.m.

Haas: She has children.

Pribar: Yeah, my youngest daughter. That’s her clock, so we wake up and cuddle for at least 20 minutes. It makes getting up that much better.

What’s one thing you absolutely must have on set?

Haas: I have a different notebook for each character — I’m actually going to choose the notebook for the character I’m currently playing. Sometimes I don’t even touch it for days, but I always have it on set with me. It can be for serious stuff, or just drawing while I’m thinking and working — things that come to my mind regarding the character. It’s kind of like the character’s journal.

Pribar: What I do when I write, which is the majority of what I do, is find a specific tune of music I listen to while I write each project. I’m just looping through over and over again. It makes me detach myself from the world and enter the story, just listening to the tune. For “Asia” it was an Italian composer — just music, not a song.

Do you guys have any quarantine hobbies?

Haas: I really love graphic design, I love using Photoshop to make collages, and I’ve been getting back to it. I have a huge wall in my work room that I made. I’m very proud of it, it took me a while during quarantine. Ruthy’s a mother, so she has no time for hobbies.

Pribar: Yeah, in COVID I was with my kids all day. My new hobby was Zoom.

It sounds like you guys really get along. How did you find each other for this film?

Pribar: Because we knew [Shira] was very good, we didn’t bring her in for the initial auditions; we brought her in when we were matching up mothers and daughters. From the beginning, I knew I wanted a mother and daughter that would really resemble each other, and not just take the two best actresses I could find. But what was amazing was that I found two incredible actresses and they also resembled each other so much that it was impossible to ignore. I didn’t realize how similar they were until they were in the same room. When we put the pictures together it was like, “OK, this could work,” but it was not as evident as watching them together. I was blown away by that.

Haas: Same for me. I knew Alena, and people told me we looked alike, but we had never met. I remember for the screen test, I was sitting in the waiting room and I heard her steps and looked up — and I had a double take.

When I watched the first scene I couldn’t even tell who was who.

Haas: Yeah, it happens on Facebook as well. It’s like “You can tag yourself,” but it’s Alena’s picture.

As for what drew me to the film, I only got a few scenes in the beginning. But honestly there was this feeling, which you can have a few times but it’s not something you always have — an urge to do this role. How could I explain to Ruthy that it had to be me? Not because I’m the best actor, but because I felt this energy and connection to the character. Then I got the script, and I called her and said, “I’m Shira.” I think I was crying. 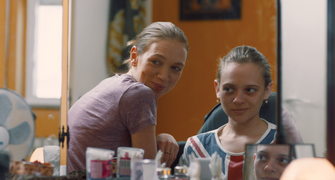 The mother-daughter relationship at the heart of “Asia” develops as Vika’s health deteriorates beyond repair. Image by Menemsha Films

What I liked most about this film was that it shows so many types of caregiving. Ruthy, did your own experience as a mother make you want to explore that?

Pribar: I have to say I wrote the script before I became a mother. Which is strange because it is a film about caring for other people, as a mother and not as a mother. When we’d already started casting and were ready to shoot within a few months, I found out I was pregnant. And no insurance company in Israel would agree to insure a production with a pregnant director. So I found myself having to postpone filming for a year. It was really difficult for me, because I’d been looking forward to shooting my first feature film for five years. In a way, it was my first lesson as a new mother, understanding that there are sacrifices I’m going to make even before I give birth. And it made me understand all these things that were already in the script, but now I was experiencing them. And then shooting the film when my baby boy was 10 months old, it really changed how I perceived motherhood, how I perceived taking care of another human being and having this huge responsibility. You don’t always know how to be that person, how to be a mother.

In recent years, there’s been a lot of discussion about how best to represent people with disabilities in film, and which actors are best equipped to portray people with severe illnesses like Vika’s. Ruthy, how did you grapple with those questions when casting “Asia?”

Pribar: I’ve been asked, “Could you take an actress who has this illness to portray Vika?” But it isn’t possible, because the illness is progressive. Vika starts out able to walk, to do everything, and by the end of the film she is bound to a wheelchair. But I do understand the sensitivity around it. I also think we all draw from our own lives and our own experiences. When you treat the character that you write or act with sensitivity, I think it shows on the screen.

One undercurrent in “Asia” is what it’s like to be a Russian immigrant in Israel. Shira, how did you prepare for that part of the role? Did you learn Russian?

Haas: Well, in the movie Asia’s character is mostly speaking Russian, and I mainly answer her in Hebrew. I did learn some sentences. It’s a very difficult language. Even if I compare it to Yiddish, which I did for “Unorthodox,” I think it’s harder.

The more challenging part was to respond to Alena, because she’s speaking a language I don’t know and I need to respond in an authentic way. Sometimes your partner is doing something slightly different, so you react differently, or there might be a specific word the other character is saying that drives your character crazy. There was a point where I asked Alena to record herself so I could listen to her, and we worked on that a lot in rehearsals. When we arrived at filming it felt natural to me, almost as if I knew Russian.

When you finish a big project like “Asia,” what’s your favorite way to unwind?

Haas: Sleep a lot! When you finish a project it can be emotional, letting go of a character but also people who were like your family. So I like to take a few days just to connect to Shira again.

Pribar: I have to say, I don’t do that. I try to sleep better than I do when I’m really busy, but I would usually jump straight away to starting a new project. I really hate having nothing on my mind.

Pribar: I guess — but again, when you have kids, it’s healthy to have something other than your kids.