Does something Jewish flow through the ‘Spoon River Anthology?’ 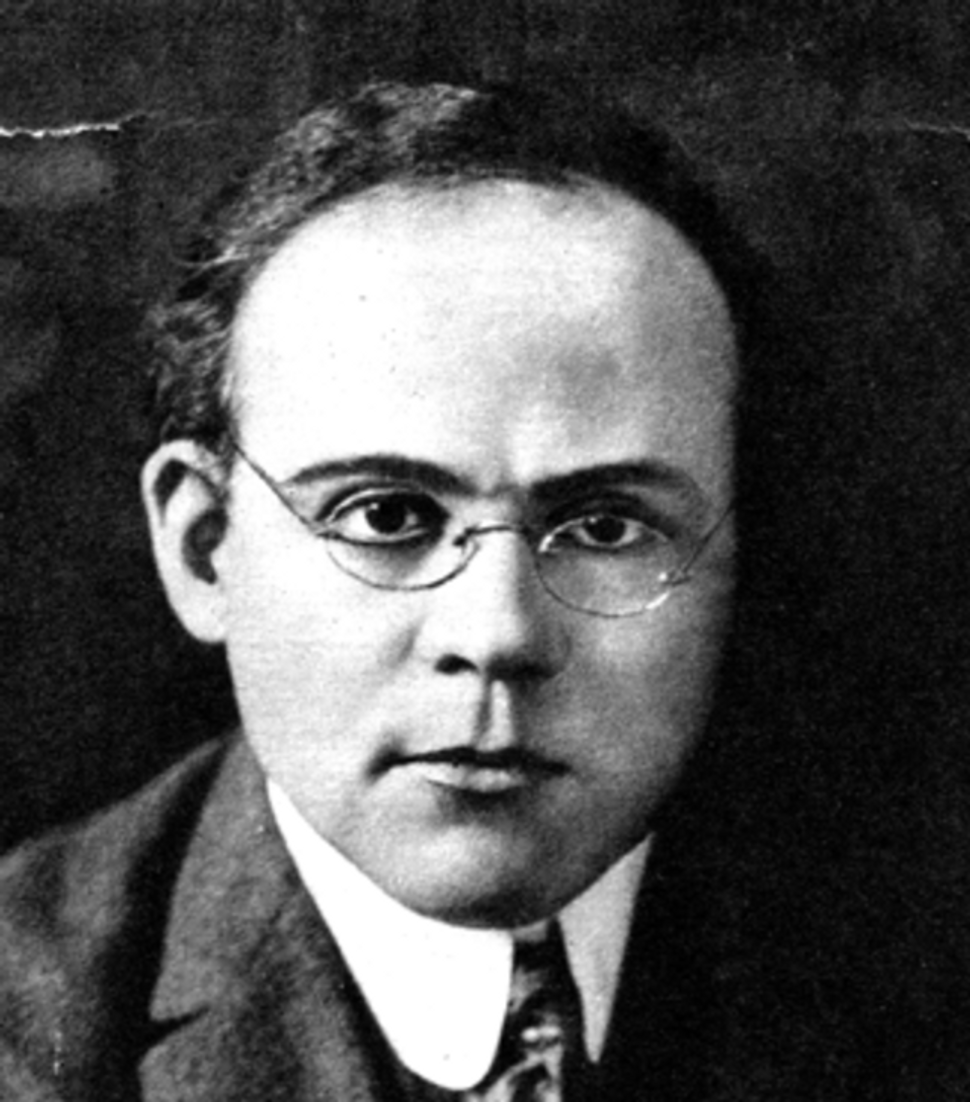 “Spoon River Anthology” (1915) by Edgar Lee Masters, a collection of autobiographical verse monologues in epitaph form, was named by Eliot Weinberger as the “century’s most influential book of American poetry” alongside T.S. Eliot’s “Waste Land.” A new book on Masters from University of Illinois Press is a good occasion for examining the neglected subject of Spoon River’s Jews.

An attorney who fought for workers’ rights, Masters has been described as a “violent antisemite,” possibly in part due to his association with the novelist Theodore Dreiser, who did indeed loathe Jews.

Yet Masters had a more complex rapport with Yiddishkeit, as might be expected from a leftist who worked as law partner of Clarence Darrow. Darrow was so philosemitic that he wrote a short story, “Little Louis Epstine” about a Jewish paperboy who lost one hand in an accident (“He was run over by a beer wagon when he was a baby”) and the other to frostbite.

Masters produced nothing quite that lachrymose, but was persistently preoccupied with Jewish history and lore.

In 1907, years before “Spoon River,” early praise of his verse appeared in Emma Goldman’s radical journal “Mother Earth.” In an unsigned review of Masters’ collection “The Blood of the Prophets,” the critic, possibly Goldman, opined that despite “great faults of arrangement,” the “rebel verses” were “splendid pieces of fire.”

Not long before abandoning his legal career in 1930 for full-time poetic pursuits, Masters wrote his first biography, of the Chicago Jewish corporate lawyer Levy Mayer, published in 1927.

This commission was obtained through Abe Meyer, a Chicago attorney and the subject’s brother-in-law, who had done business with Masters and Darrow. Meyer later represented Masters in a divorce case, even lending him money during difficult times.

Levy Mayer’s widow sponsored the biography, which lauded Mayer as a “great lawyer and a good man,” underlining his “professional integrity, loyalty to his country, generosity to the weak and devotion to his friends and family.”

Masters acknowledged the acumen of a colleague whose career was diametrically opposed to his own; Mayer had earned a fortune by representing corporations in lawsuits against workers.

As he turned from the law to poetry, Masters continued to befriend Jews, including the legal philosopher Jerome Frank and the novelist and historian Waldo Frank (no relation) who published his magazine writings.

A tragic schlimazel along the lines of Darrow’s Louis Epstine, Hainsfeather planned to be buried in Chicago’s Hebrew Benevolent Society Cemetery, but a fiery train wreck left his remains unidentifiable, so he was interred at Spoon River instead.

“If the excursion train to Peoria/ Had just been wrecked, I might have escaped with my life—/ Certainly I should have escaped this place./ But as it was burned as well, they mistook me/ For John Allen who was sent to the Hebrew Cemetery / At Chicago,/ And John for me, so I lie here. / It was bad enough to run a clothing store in this town,/ But to be buried here—ach!”

Tellingly, another epitaph in “Spoon River” is dedicated to Aaron Hatfield, who, as the literary historian Jason Stacy observes, was “named for the brother of Moses and the high priest of the Israelites.”

The biblical allusion underlines Masters’ message that current Spoon River inhabitants are unchanged from denizens of ancient Galilee at the time of Jesus, who Masters consistently portrayed as a “Jewish reformer,” as he does in “Lincoln the Man” (1931).

This message was personal because, as Masters explained in a January 1933 essay, the poem “Aaron Hatfield” was a tribute to his grandfather, a “deeply religious” man who spoke “in the words and rhythms of the Bible.”

In Masters’ 1920 collection, “Domesday Book,” a speaker announces: “I look back/ Upon the Jew and Jesus, on the Thora/ The gospel, dogmatism, poetry,/ The Messianic hope and will and grace… Let’s see from whence we came./ I take the Hebrew faith, the very frog legs/ Of our theology – no use to say/ It has no place with us.”

The poem’s narrator expresses some bigotry while arguing for the permanent presence of Judaism in Christian worship: “Your ministers/ Preach from the Pentateuch, its decalogue/ Is all our ethic nearly; and our life/ Is suckled by the Hebrews; don’t the Jews/ Control our business, while our business rules/ Our spirits far too much?… Palestine/ Is just a little country, fights for life/ Against a greater prowess, skill in arms…/ The Jews conceive a God who will dry up/ His people’s tears and let them laugh again!/ Hence in Jehovah’s mouth they put these words:/ My word shall stand forever, you shall eat/ The riches of the Gentiles, suck their milk…/ I will give you power,/ Dominion, leadership, glory forever./ My wrath is on all nations to avenge/ Israel’s sorrow and humiliation.”

How much Masters agreed with this view of Jews as vengeful capitalists is a moot point, involved with presenting Christianity as “new wine to the Jews” rather than the “old decalogue by [Jesus] renewed.”

In other poems from 1916, Masters persisted in tracing historical evidence of the Jews, as in “Toward The Gulf” which discerned the “Persian, Jew and Goth/ In the weave of the cloth” and “Will Boyden Lectures” where a narrator specifies “that Jesus knew/ No history except that of the Jews.”

The latter poem re-echoes the antisemitic trope of Jewish dominance, suggesting that “Jesus gave the Hebrews such a lift/ So that to-day they rule the Occident/ Where Athens should have ruled…”

Jesus is presented as seeking “to fulfill the law/ Of Moses and Isaiah, [to] make Jerusalem,” while another poem, “Autochthon,” on the subject of Abraham Lincoln, declares that “in truth/ The Hebrews taught the idealist how to sing/ Destruction in the name of God and curse/ Where strength was lacking for the sword.” By delivering the Gettysburg Address, Lincoln is accorded “place/ In Hebrew temples with Ezekiel,/ Habakkuk and Isaiah.”

From the beginning, Jewish readers of Masters were drawn to this spare, unadorned, quintessentially American voice deeply imbued in biblical imagery.

Masters was cherished by novelist Saul Bellow, who acknowledged him as a literary influence; “Spoon River” would be lucidly translated into Hebrew by the poets Hillel Bavli and T. Carmi.

Charles Reznikoff, a fellow lawyer and poet, titled a poem, “Her Secret Thoughts were Fingers,” paraphrasing a line from Masters’ “Fletcher McGee” and citing his source in a note paying tribute to Reznikoff’s poetic predecessor.

Masters’ essay discussing the gestation and later widespread popularity of “Spoon River” bragged that the book “went to Jerusalem.” Mutual recognition between Masters and his Jewish readers was epitomized by the Indianapolis Jewish Post of February 1944 which applauded a Jewish businessman, Alex Hillmon, “for giving a job to” the then-old and impoverished Masters.

Despite some dubious verses, today’s Jewish readers may share this admiration, combined with rachmonis, for the difficult life and poetic achievement of Edgar Lee Masters.

Does something Jewish flow through the ‘Spoon River Anthology?’