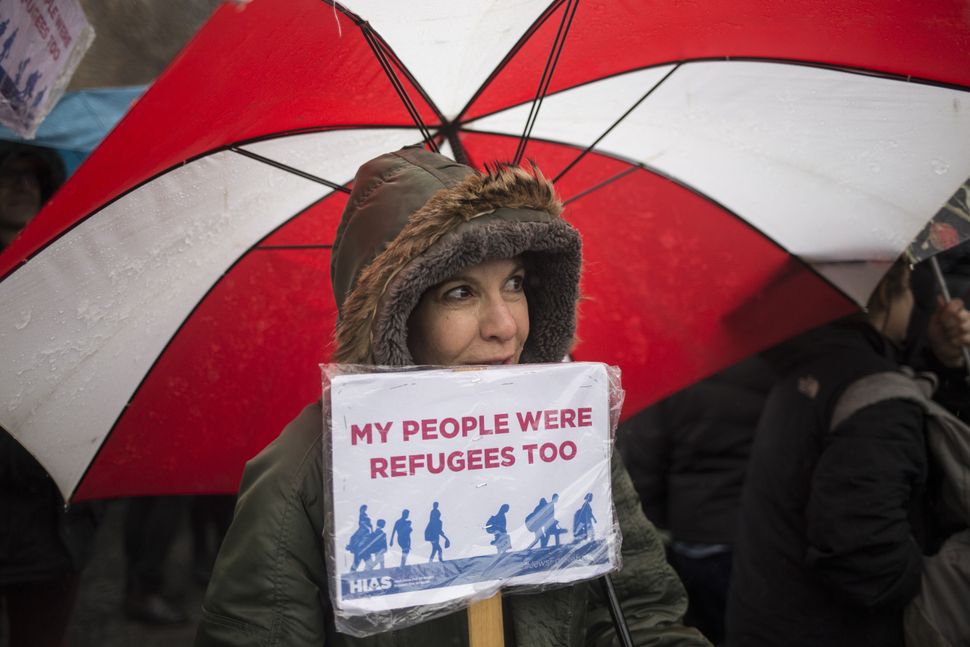 In October 2018, Joel R. Charny was in northeast Syria. As president of the Norwegian Refugee Council USA, Charny was evaluating water, shelter and education programs for Syrians forced from their homes. In its seventh year of civil war, Syria was considered the most dangerous country on earth by the Institute of Economics and Peace.

“I was rolling along after another long day in the car,” recalled Charny, who lives in the Washington DC area and has over 30 years of experience in humanitarian work. “Cellphone coverage is really spotty.” When he picked up a Turkish signal, a text from a grade school friend came in: “Shooting at Tree of Life. Is your father ok?”

Tree of Life Congregation is Charny’s family’s synagogue in the Squirrel Hill neighborhood of Pittsburgh. It’s where he was bar mitzvahed. “My father, he was 90,” Charny said. “His life did at that time and still does revolve around the synagogue. It was a Saturday. One hundred percent he was there.” Soon after, he was relieved to hear that his father had escaped unharmed.

The gunman, who entered during Shabbat services shouting antisemitic epithets, killed eleven worshippers and injured six others. Charny was in shock. “I was the one who was supposed to be going to the dangerous place,” he said. “It was my father who ended up in the dangerous place on a Saturday morning in Pittsburgh.”

The shooter, a white supremacist, targeted the synagogue for hosting a National Refugee Shabbat with HIAS, a Jewish organization that provides aid to refugees.

“That just brought it home even more,” said Charny. “The idea that it was not a random shooting but that it was directly connected with the attempt to show solidarity with refugees.”

‘We Take Refugees Because We’re Jewish.’

When HIAS began as the Hebrew Immigrant Aid Society on the Lower East Side of New York in 1881, its mission was to help Jews fleeing the pogroms. Later, it aided Jewish refugees of Nazi-occupied Europe, Holocaust survivors and more than 400,000 Soviet Jews. Since the 1970s, the mission of HIAS has evolved to aid and settle those in need from Southeast Asia, the Middle East and Latin America. “We used to take refugees because they were Jewish. Now we take them because we’re Jewish,” says HIAS President Mark Hetfield. 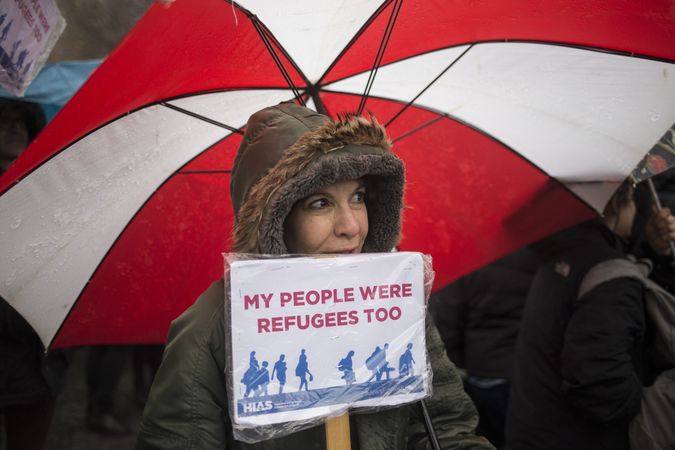 The Tree of Life massacre galvanized Jewish employees of HIAS to fully embrace the organization’s Jewish identity, according to Yiftach Millo, HIAS Country Director of Aruba. “Jewish history is central to how we see the world at HIAS,” explained the Israeli humanitarian worker on a Zoom call from Oranjestad, where he is assisting Venezuelan refugees. “We’re not a missionary organization and Judaism is not a missionary religion, but it is there in the background. It is there in the universal values that are shared among the various religions.”

Millo’s four grandparents survived the Holocaust in Romania, something that motivated him to work with refugees.

“I was always fascinated by migration,” he said, adding that being gay gave him what he called “an experience of exclusion,” which spurred his desire to create a more inclusive world. Other Jewish humanitarian workers find inspiration in the teachings of the Torah.

“Treat the stranger well because you were once a stranger yourself,” said Jacob Kurtzer, director of the Humanitarian Agenda at the Center for Strategic and International Studies, quoting from Leviticus. While no longer observant, Kurtzer grew up in a Modern Orthodox community and says Jewish values informed his career in Myanmar, Sub-Saharan Africa, Israel and Palestine.

You Leave Your Passport at the Door 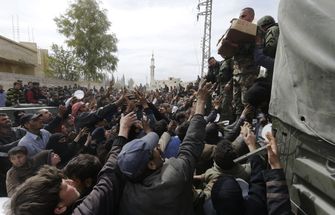 In Damascus: Syrian civilians evacuated from the Eastern Ghouta enclave reach out to receive food distributed by Syrian soldiers as they pass the regime-controlled corridor opened by the government forces in Hawsh al-Ashaari, east of the enclave town of Hammuriyeh (Hamouria) on the outskirts of the capital Damascus on March 18, 2018. By Getty Images

Jewish aid workers may draw inspiration from their background, but must be neutral actors, especially in areas of conflict.

“You leave the passport at the door. And the same is true for your ethnic and cultural background,” Kurtzer said.

In addition, aid work has become increasingly risky. In 2019, 125 aid workers were killed. Another 358 were kidnapped or wounded, according to the Aid Worker Security Report. Jewish aid workers may be targeted in places where Islamic extremist groups are active or where Israel is involved in hostilities and perceived as a belligerent.

“There are clearly contexts today where being Jewish could have risk implications,” said Kurtzer.

Others in the sector agreed that being Jewish can be a complicating factor in the field, just as sexual orientation, nationality and gender can be.

For one American Jewish humanitarian worker who did not want to disclose her name to protect colleagues on the ground in Syria, this has meant hiding her Jewishness while working in Syria, Iraq, Gaza and Jordan. Behind closed doors, she’s hosted Rosh Hashanah dinners in Jordan and perfected her babka in Iraq. Her work may be guided by the concept of Tikkun Olam, but only her most trusted Arab and International colleagues know that she is Jewish.

“Jews are seen as almost representatives of Israeli government policy,” she said. To not reveal she was Jewish is not just a safety mitigation but a way to avoid misunderstanding and let her work be judged on its merits, not her religion.

“In Gaza, there was a rumor going around the office that I was Jewish,” she said. “That was enough to raise suspicion and question the work that I was doing.” It was not just an issue of her colleagues’ personal opinions. Her Jewishness can lead others to question the organization’s credibility or cause problems for Palestinian coworkers who live under the Hamas government. “There is so much fear and suspicion,” she said, adding that all the Jewish aid workers she knows of in Jordan, Iraq and Syria keep their Jewish identity quiet.

It’s not all paranoia. In 2018, Haaretz reported that Israeli military intelligence has used humanitarian aid as a cover for covert operations in Gaza.

‘The Fact that I Was Jewish Was No Secret’ 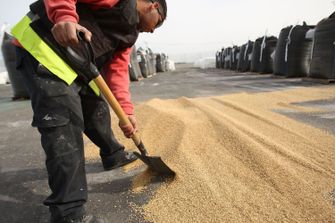 Preparing for Relief: Rice is shoveled up from a dropped sack of humanitarian relief to be shipped into Gaza at the Rafiah border crossing in January 8, 2009 along the Israeli-Gaza border in Israel. After a United Nations driver was shot and killed on the Gaza side while delivering humanitarian relief the UN has since halted humanitarian shipments into Gaza. By Getty Images

In the Occupied Territories, however, there are openly Jewish workers and Israeli organizations providing aid.

“The fact that I was Jewish was no secret,” said Kurtzer of his time in Gaza. “But it was a topic of private conversation, if it was a topic at all.”

Charny also does not deny being Jewish, but he does not advertise the fact when he’s in the field. Humanitarian work is not bridge-building work; it is helping those in need without an agenda. Charny made this principle clear when he recalled a trip to Syria in 2008.

“My focus on that trip was to check on the plight of Palestinian refugees who had been forced out [of Israel] in 1948 and had found a safe haven in Iraq,” said Charny. He was referring to Palestinians in Baghdad who became targets of violence after the US invasion. “Some of them in the desperate conditions that prevailed in Iraq at the time found shelter in a kind of no man’s land right at the border between Iraq and Syria.”

You think a refugee from Baghdad sitting in a tent in 120-degree weather, depending on food handouts and wanting a future for their kids is thinking about the Mid-East crisis?

“You think a refugee from Baghdad sitting in a tent in 120-degree weather, depending on food handouts and wanting a future for their kids is thinking about the Mid-East crisis?” Charny asked. Still, Israel did hover in the background. Some of the families, stateless and homeless, produced pre-1948 records for property in what is now Israel. “I’m sitting on the floor of their tents, but I’m not going to do a true confession of ‘I’m Jewish.’” Instead, as a humanitarian worker, he asked, “How can we help you?”

Even if Jewish aid workers are not bridging the divide between Jews and Muslims in the Middle East, they do see the potential for it. In Damascus, the aid worker who asked not to be identified, has not dared to express her Jewishness, but she’s taken solace walking the leafy cobbled stone streets of the old Jewish quarter. The Hebrew inscriptions on a couple of buildings survive, and the city’s antique shops house relics of the neighborhood’s Jewish past.

“It’s a reminder that these are communities that once were much more diverse and where the Jewish community was once a vibrant contributor,” she said. While she’s pessimistic about the near future, she does see hope. “If it existed before, it can exist again.”

For Millo, being gay and Israeli has presented barriers in helping him gain the trust of others, but he says he always finds common ground. “I try to be very transparent about it even in places where it is unaccepted and may even be criminalized,” he said, recalling a time when he was working alongside a Lebanese colleague.

“She was Shiite from the South,” he said. “When she learned I was Israeli, she was shaking. Slowly, Slowly I approached her, and we passed that obstacle.” Likewise, working with diverse groups has affected him. “It changed my perception of the conflict and put things in perspective,” he said.

“If I won the lottery, I’d fund internships and help Israelis join various humanitarian organizations,” Millo said. “It is not just about your survival and focusing on your own group. In order to sustain Jewish protection across the world, we have to be active in helping other minorities and other people who are being persecuted. We cannot be silent.”