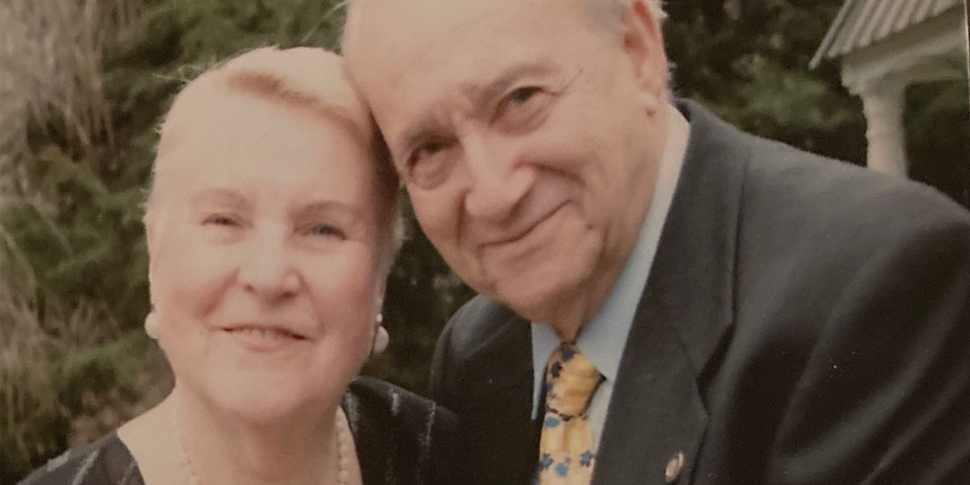 Holocaust survivor, Max Temkin, most recently of Setauket, New York, was part of a delegation that brought back soil from concentration camps to place under the Eternal Flame of the United States Holocaust Memorial Museum. He died May 22, several weeks after suffering a stroke on his 99th birthday, March 27.

Max was born in Lodz, Poland, on March 27, 1922. He started his life in a large Jewish family consisting of his mother, Paula; father, Jacob; two brothers Chaim and Ephraim; and his sister Lisa.

When the Nazis invaded Poland on Sept. 1, 1939, his world changed forever. All of his family members were eventually killed in the concentration camps. Max was separated from his family on Sept. 19, 1939, never to see them again. He was 17 years old.

Max described his experience as “hell on Earth.” In 1940, he was transported by cattle car to Auschwitz, where he was immediately given striped prison garments and tattooed with the number 142538 on his left arm. He would always say “This meant that 142,537 people were tattooed in Auschwitz before me!”

He was forced into slave labor; his primary job was in construction. He helped build the Autobahn, a public works program promoted by Hitler for the purpose of providing quick transportation for vehicles carrying troops. He also worked as an electrician and coal miner. Max had no formal training in these fields but always complied with orders. As he put it, “When the Nazis asked me to do something, I did it. Otherwise, they would kill me.”

Max was surrounded by starvation, sickness and death as well as the constant stench of cremated bodies. He was shot randomly by a German guard — “just for the hell of it.” The large wound on the back of his right leg did not become infected, and he survived.

On Jan. 18, 1945, to erase any evidence of their humanity and with the Russians fast approaching, the Nazis forced the prisoners to march out of Auschwitz. It was bitterly cold. Max ate snow to survive. Any person who stumbled or slowed down was taken to the side of the road and shot. The prisoners were freezing and infected with lice from head to toe, having not showered in weeks. Sixty thousand prisoners were forced to march from Auschwitz to other camps in Germany. The death toll was staggering.

Max arrived in Buchenwald in late January, weary but alive. Conditions there were not any better than at Auschwitz. He was immediately put to work cleaning bunkers where there were bodies of dead German soldiers from previous bombardments by English forces.

Late in the afternoon of April 11, 1945, Buchenwald was liberated by General George Patton’s Third Army Unit. “This is a day I will always remember and cherish.”

Max is in the famous photograph by Life magazine photographer, Margaret Bourke-White (“The Living Dead at Buchenwald, “1945), taken hours after liberation. He and fellow prisoners were still behind barbed wire when the photograph was taken. Max is the second prisoner from the right in the second row.

“The Living Dead at Buchenwald” was not published in Life Magazine until December 1960, in a special double anniversary issue. Titled “Grim Greeting At Buchenwald” the caption reads: “In Margaret Bourke-White’s grim comment on man’s inhumanity to man, survivors of Buchenwald stare out at their Allied rescuers like so many living corpses, barely able to believe that they would be freed from a Nazi camp where the only deliverance had been death.”

After liberation, while in the Zeilsheim displaced persons’ camp near Frankfurt, Germany, Max met and fell in love with Sara Braun, originally from Ozorkow, Poland. Sara also lost her family in the Holocaust. They worked as volunteers for the United States Army, Max primarily as a cook. They promised each other they would get married in America.

Max always said that he was “at a loss for words” to describe how he felt when he first saw the Statue of Liberty as his ship, the USS Marine Flasher, pulled into New York Harbor. Although it was dusk and the Statue was hard to see, “her silhouette will always be preserved in my memory.”

He married Sara May 8, 1948 (Mother’s Day) in the Bronx. Their wedding guests were members of their foster families and American soldiers who liberated Max from Buchenwald. The soldiers came from all parts of the country.

Although Max and Sara had the good fortune to live with two wonderful foster families, life after marriage was challenging. They lived in a tenement on the Lower East Side, shared one bathroom with the other tenants, worked full time during the day and attended English classes at night. They had to pass an English proficiency exam to qualify for U.S. citizenship.

Max had the opportunity to start a 6-year apprenticeship to become a photoengraver at Intaglio Corporation of New York. The training would ultimately lead to a prized union job. Most of these jobs went to sons or brothers of employees, so this was indeed a lucky break for Max. A group of very understanding men guided him through his training. He was the only Jew and immigrant in the company when he started.

Max demonstrated a unique visual aesthetic and soon assumed responsibility for the preparation of advertisements that appeared in the Sunday supplement, Parade Magazine. Max worked as a photoengraver at Intaglio Corporation for 32 years and it became his second home.

In November 1992, he was part of a delegation from the United States Holocaust Museum in Washington, D.C., which included survivors, U.S. Army liberators and museum supporters, on a 10-day journey to Western Europe.

The delegation, sponsored by the Museum in cooperation with the Department of Defense’s 50th Anniversary of World War II Commemoration Committee, visited Holocaust and military sites in Austria, Germany, the Netherlands, Belgium and France. As part of their mission to gather soil for the Museum’s Hall of Remembrance, Max was given the honor of bringing back soil from Buchenwald, where he was liberated in 1945.

He placed the soil from Buchenwald under the Eternal Flame in the Museum’s Hall of Remembrance during the Soil Dedication Ceremony in February 1993. Fellow Jewish Holocaust survivors brought back soil from the 37 other concentration camps and participated in the ceremony as well.

Max was active in the Lodzer Young Men’s Benevolent Society, where he was a member of the executive board for 20 years and served as president from 1994 to 1998.

After retirement, Max and Sara traveled to middle schools and high schools on Long Island to talk to students about their Holocaust experiences. On Holocaust Remembrance Day, they were invited to Ward Melville High School in Setauket, New York, on two occasions, April 11, 2002, and April 17, 2008. In 2002, their older granddaughter, Stephanie Pollack, who was a sophomore at the time, was sitting in the audience. In 2008, their younger granddaughter, Ilana Pollack, a junior, was sitting in the audience. They spoke to students at Paul J. Gelinas Junior High School in Setauket, at the invitation of Mrs. White, Ilana’s eighth grade English teacher, also on the occasion of Holocaust Remembrance Day.

They were invited by Jeffrey Sanzel, executive artistic director of Theatre Three in Port Jefferson, New York, to join the theater’s traveling troupe at middle schools when they performed “From the Fires: Voices of the Holocaust,” the widely acclaimed play Jeffrey wrote. This gave Max and Sara another opportunity to talk to students about their Holocaust experiences.

They spoke frequently at Islip Middle School in Islip, New York, at the invitation of now-retired teachers Adina Karp and Paul Tapogna, who they met in the audience when they first saw “From the Fires: Voices of the Holocaust” at Theatre Three.

At the end of each talk, Max would say: “I want to leave you with this message: Never, never hate. Hate is the enemy. The Nazis were a vehicle of hate. Hate is like a cancer, it will destroy you as well. Hate is the enemy but for those of my generation, time is also the enemy. I am an elderly man and I want to share my story with as many young people as possible before I am no longer able to. So, go home today and hug your parents and siblings. And never take the Statue of Liberty for granted.”

Max was a vibrant, elegant man who always kept a positive attitude. He made friends wherever he went. He always lived in the moment but never forgot the past.

Funeral services were held May 24 at Star of David Memorial Chapel followed by burial at New Montefiore Cemetery in West Babylon, New York.

Marilyn Temkin is an assistant professor of medicine and member of the clinical faculty at Mather Hospital/Northwell Health.