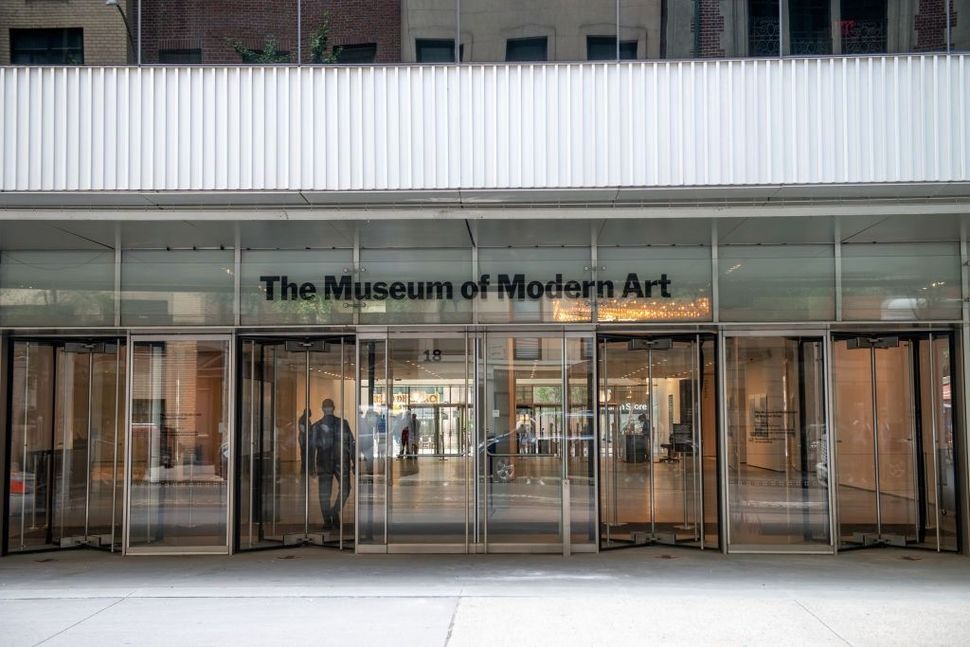 The main entrance of MoMA. Courtesy of Getty Images

Of all the museums to criticize for its ties to imperialism, the Museum of Modern Art seems like a strange one. Why not the Metropolitan Museum, or the British Museum, institutions that exhibit older art, often pilfered by conquering Europeans?

But the Strike MoMA movement is about a lot more than, well, striking MoMA.

The movement, which began in early April, is non-hierarchical and comprises a fluctuating network of working groups and other social justice organizations. While it seeks solidarity with the museum’s employees, the movement is not composed of or affiliated with members of MoMA’s staff — though at least one artist affiliated with the museum has canceled a program to support the strike.

Each Friday, for 10 weeks from April through mid-June, Strike MoMA held “pop-up” demonstrations across the street from the museum’s 53rd Street entrance, as well as online webinars. They also formed working groups — such as the International Imagination of Anti-National Anti-Imperialist Feelings (IIAAF) and Modernity is an Imperial Crime: A Working Group — to continue to imagine a post-MoMA future after the end of the demonstrations.

They are striking against the concept of Modernity itself — Modernity with a capital M, one organizer clarified.

If you read through the manifesto on the movement’s site, you’ll first encounter a long treatise against MoMA’s board of trustees, particularly Leon Black; it recently came to light that Black had deep connections, financial and personal, with Jeffrey Epstein.

Many of the other board members, according to the site, have ties to arms manufacturing, prisons, the NYPD as well as other “vulture fund exploitation, gentrification and displacement of the poor, extractivism and environmental degradation, and patriarchal forms of violence.” Strike MoMA also calls out the museum’s treatment of its staff and its working culture.

The rest of the document lays out a sprawling philosophical framework that places Strike MoMA within a grander struggle of liberation, fighting for oppressed people around the world, Palestinians to Kashmiris, and against keeping art behind walls, inaccessible to the masses. It is striking against the concept of Modernity itself — Modernity with a capital M, one organizer clarified.

The movement’s language can be so lofty that it’s difficult to understand at times, as is how Palestinian oppression connects to an art museum. But organizers insist that the issues are linked. And whether or not you buy the philosophical argument, in practice, the movements have merged.

The sin of ‘artwashing’

Nerdeen Kiswani, an activist with Within Our Lifetimes, a Palestinian-led organization fighting for independence, helped lead the strike’s final demonstration on June 11. She said Palestine has been part of the Strike MoMA movement since the beginning.

She criticized the museum for “laundering” perception and public opinion of board members with financial ties to Israel’s military or various Zionist initiatives.

“Artwashing” is a process by which reputations can be improved or obscured through association with prestigious art.

Strike MoMA refers to this as “artwashing,” a process by which reputations can be improved or obscured through association with prestigious art.

“The money’s been dirty for a few hundred years,” wrote Abou Farman, in a blog post for Verso on the post-MoMA future. “Wherever the money comes from, the museum or non-profit acts as the laundromat for the global oligarchy, sanitizing the money and giving it the stamp of culture’s approval.”

The movement began to gain wider attention in its sixth week, when its weekly demonstration merged with larger pro-Palestinian marches in Manhattan.

Hyperallergic reported a scuffle between MoMA security guards and five protesters, who attempted to enter the museum via the staff entrance, and are now permanently bannned from the museum. Later, the NYPD arrested a different protester, Saada Mansour, who was waving a Palestinian flag from a car; he was released that night. 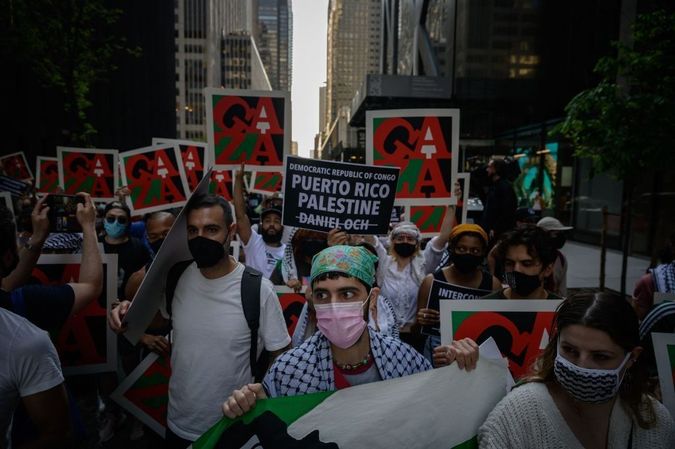 The demonstration outside MoMA Courtesy of Getty Images

There were also slides condemning MoMA board members for giving funding to pro-Israel initiatives such as Taglit-Birthright and an Art Institute of Chicago trip to Israel, or lobbying for the IHRA definition of antisemitism, which it says results in the “proscription and criminalization of speech in support of Palestinian liberation.”

“You don’t even have to be Jewish to go on these trips anymore, you could just support Israel and it helps. It’s like a PR thing, a PR mechanism to get people to support Israel,” said Kiswani of the various trips board members funded. 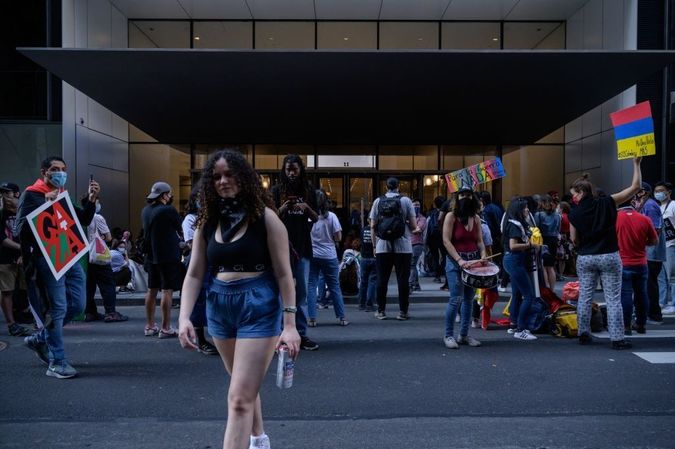 Demonstration outside of the Museum of Modern Art in Manhattan. Photo by Getty Images

One of the authors of Strike MoMA’s framework insisted that Palestine, while a “bellwether issue,” is “not exceptional among struggles that are happening across the world.” It is, however, the only struggle featured at the top of the Strike MoMA website.

“MoMA cannot pretend to stand apart from the attack on Gaza or the Occupation of the West Bank and Jerusalem more broadly. Because the corporate power and wealth that sits atop the museum suffuses all of its operations, there are no clean hands,” reads the letter.

After the strike’s 10 weeks of action, there have been some changes at the museum, in the board and with its exhibiting artists.

A strike against MoMA is a difficult prospect for many artists; many dream of exhibiting their work at the museum. Nevertheless, Gabrielle L’Hirondelle Hill, an artist currently showing at MoMA, published a letter withdrawing from several educational programs she was supposed to lead at the museum.

“I am currently exhibiting work at MoMA, and thus benefiting personally from money brought in by the board,” she wrote, but expressed her support for those struggling against the museum.

Other major artists, such as Michael Rakowitz, who creates videos for the movement as “Comandante Scream,” have been aligned with the Strike MoMA movement since the beginning. 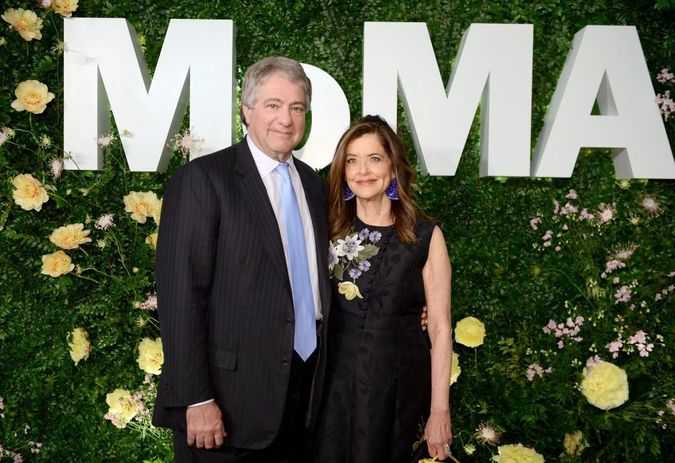 Before the strike began, Leon Black announced his intention to vacate his position as chair of MoMA’s board of trustees at the end of his term, on July 1, having been pressured by major artists such as Ai WeiWei as well as board members. His departure may also lead to the removal of several works in his collection from MoMA, including Edvard Munch’s “The Scream.”

His replacement will be Marie Josee-Kravis, another long-time board member who has been characterized by Strike MoMA as part of the “‘interlocking directorate’ whose violence is accumulated in the very structure of the museum.”

In the Verso blog, Abou Farman emphasized the importance of art in imagining new worlds, writing, “It is time for these visions to be unleashed and wielded in the world.”

“Why strike MoMA? So that something else can emerge”

Given Strike MoMA’s sweeping philosophical framework, it is hard to explain exactly what the end goals are. But it seems fair to say that the hope is not far short of a liberated utopia.

The strike’s demonstrations were just the beginning. “Why strike MoMA? So that something else can emerge, something under the control of workers, communities, and artists rather than billionaires,” says the manifesto. “This could be a first step for a city-wide process.”