Gossip is back — and that’s a good thing 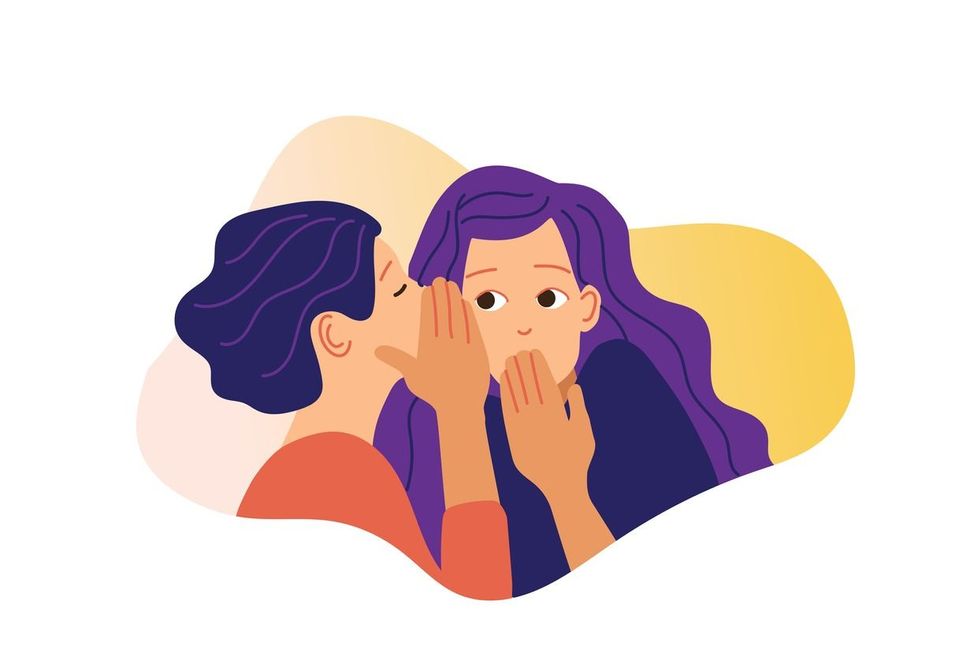 teaches cultural norms of a community

I was at an in-person Shabbat dinner a couple weeks ago — my first since the pandemic began. It was my first time back in that previously-familiar environment, figuring out who you know in common with the strangers at the table.

At this dinner, specifically, the main point of connection for our game of Jewish geography was several romantic entanglements. All of us knew multiple people — including some at the table — who had dated a few specific guys, and revelations abounded, with appropriate gasps and laughs and editorializing commentary.

I cannot tell you how delightful it was. I stayed at this dinner until past midnight, even though it was pouring that night and I almost hadn’t come.

Part of this delight was, of course, finally getting to meet new people, relax and talk at length over a tasty meal indoors in someone else’s apartment. But a big part of it was the gossip.

Over the past 16 months of varying levels of quarantine, gossip has been one of the greatest losses. I talk to my friends about politics and religion and our hopes for the future — and lighter stuff like TV or TikTok — but gossip breeds a certain instant intimacy that is hard to achieve any other way.

I don’t mean the kind of gossip that tabloids trade in; I’ve never met Jennifer Aniston, so I don’t really care if she’s been sighted with Brad Pitt. I mean gossip about yourself, and the communities you’re actually involved in.

Telling people about your own exploits and foibles requires trust and vulnerability, and it cements relationships. But with hardly anyone dating or going on adventures or seeing each other, it felt like our lives were frozen in time; there are only so many times I can talk about virus anxiety or cabin fever. My friendships sometimes felt like they were in stasis without a shared reality to bond over or personal drama to reveal and analyze.

The loss of gossip is not only isolating on an individual level — it also severs ties to community. Gossip helps you better connect to and understand the contours of the communities you’re part of, and establishes you as an insider. Without shared information about people, the knowledge that you are all part of the same scene and that you all impact each other, the bonds that hold a group together begin to wither. And it feels precarious to reenter the community blind, without any gossip by which to navigate the ways it has changed.

Gossip is generally decried in Jewish text — all the top Google hits when I searched for “Jewish gossip” were admonishing the reader not to engage in lashon hara, or, literally, “evil tongue.”

But, gossip is rarely, well, all that gossipy, according to a 2019 study published in the journal Social Psychological and Personality Science, which found that only 15% of gossip was negative. Instead, gossip tends to be neutral social information about acquaintances, such as how new parents are doing with their infant.

Researchers have also found that gossip serves to help people bond and function socially, and aids communities in keeping track of the well-being of its members. It teaches cultural norms of a community, making it tighter and helping to perpetuate tradition.

This is particularly true in Jewish settings, where the (in)famous game of Jewish geography is a symptom of the fact that our communities are deeply interconnected. Everyone knows everyone else, and news gets around fast — making us feel tightly bound to one another. It’s vital to know who is sleeping with whom, who is newly religious or had a falling out or got a new job, so you can better navigate your social surroundings — and make sure not to invite someone’s new beau to a Shabbat meal with their ex.

Honestly, what is the Talmud if not a canonized version of gossipy tales about rabbis arguing and everyday Jews trying to figure out how to live their lives? In Berakhot 62a, there’s even a story about a student watching his rabbi use the bathroom, in the interest of learning the correct minhag, or custom. In the next anecdote, the same student lies under his rabbi’s bed in order to witness him having sex with his wife — ostensibly, for the purpose of learning Torah but also incidentally pretty much the best gossip I’ve ever heard.

My Shabbat table was a perfect example of all of this. Several people having stories about having dated the same guy, for example, creates intimacy, teaches me the dating norms of the community — and also tells me that said guy might be more complicated than he’s worth, if the prospect of dating him happens to arise.

Even just one gossipy dinner made me feel like I was part of the community again, both trusted and in-the-know, connected even to those who were strangers at the start of the meal. Hopefully, at the next one, having lived a bit more in the interim, I’ll have more of my own tea to spill.

Gossip is back — and that’s a good thing