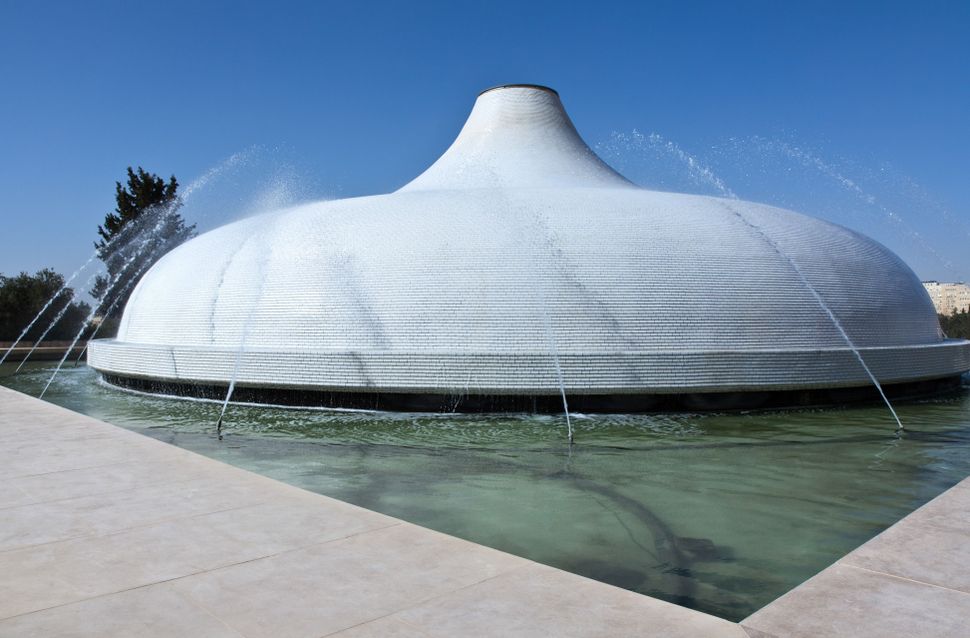 Visitors to the Israel Museum, Tel Aviv Museum, Negev Museum of Art in Be’er Sheva, and National Gallery of Modern Art in Rome will recognize the name of Arturo Schwarz, who died June 23 at age 97.

Schwarz was the munificent donor of a splendid collection of Dada and surrealist art to these institutions and others. Yet how a self-professed Trotskyite anarchist and atheist devoted to the Kabbalah managed to amass such visual treasures while disdaining private property might be less clear.

Born in Alexandria, Egypt to parents of German and Italian Jewish origin, Schwarz became an assiduous follower of the Ukrainian Jewish political theorist Leon Trotsky at the same time that he discovered the surrealist writings of the Frenchman André Breton.

With typical thoroughness, Schwarz resolved to contact Breton, which proved difficult in 1940s Nazi-Occupied France, since Breton had escaped to New York along with Marc Chagall, Claude Lévi-Strauss, and other cultural innovators and anti-Nazis through the efforts of the humanitarian Varian Fry.

After getting in touch, a fellow surrealist, the author Benjamin Péret, sent Schwarz a visiting card from Trotsky, intended to permit him access to the activist, then exiled in Mexico. But Trotsky was assassinated under orders from Stalin before Schwarz could make the trip.

Even worse, Schwarz was imprisoned as a radical and tortured by Egyptian authorities after the war’s end. He was sentenced to death by hanging, but after an 18-month ordeal, he was reprieved as a hostage because the 1948 Arab–Israeli War had broken out and the armistice would include mandated release of Jewish prisoners held in Egypt.

Finally reaching his mother’s homeland of Italy, Schwarz remained there, although his ties to Israel and Judaism were lifelong. He opened a bookstore and art gallery in Milan where he displayed work by celebrated artists such as Marcel Duchamp and Man Ray who were temporarily overshadowed by more recent trends.

Schwarz would write a book which was reportedly the first to reveal that Ray was born Emmanuel Radnitzky in Philadelphia to a Russian Jewish immigrant family.

Yet perhaps paradoxically, Schwarz found more Yiddishkeit in Duchamp, as he told an interviewer in 2013. He identified in Duchamp’s constant “fight against dogmatism” the “influence of Jewish ethics that teaches us not to obey the principle of authority and to always practice reasoning and discussion.”

These Jewish ethics, Schwarz told “la Repubblica” the following year, included a heritage that motivated him in a quest for “knowledge and brotherhood. In the Tanakh…one fundamental thing is said, even before it is said in the Gospels: thou shalt love thy neighbor as thyself, and do no harm to anyone. It is the foundation of our civil ethics.”

This credo led him to display and promote then-lesser known Romanian Jewish artists such as Victor Brauner and Marcel Janco, as well as Jewish photographers such as Claude Cahun (born Lucy Schwob in France) and Meret Oppenheim (born in Berlin).

At the Galleria Schwarz, which he ran in Milan from 1954 to 1975, an early exhibit featured artists’ books published by Guy Lévis Mano, a French printer and poet of Sephardic Jewish origin. Born in Salonica, Lévis Mano created art books with such authors as Edmond Jabès, a Frenchman of Egyptian Jewish origin, and Tristan Tzara, born Samuel Rosenstock in Romania.

Among books published early on by Schwarz for Italian readers were texts by Albert Einstein and Trotsky’s 1937 polemic, “The Revolution Betrayed,” a critique of the USSR and its rulers. “The Revolution Betrayed” was decorated with an eye-catching yellow wrapper asserting that “Stalin will go down in history as the executioner of the working class.” This offended loyal Stalinists in Italy, one of whom referred to Schwarz as a “Trotskyite Fascist hyena.”

Yet Schwarz retained his calm, as he noted in another interview, by studying Jewish thinkers, from the “Ethics” of Baruch Spinoza to the Song of Songs in the Tanakh, as well as books by Karl Marx, Sigmund Freud and Henri Bergson.

Schwarz’s own writings were erudite and thoughtful, like a 2000 essay on the influence of the Kabbalah on sculptures created by the Israeli artist Itzhak Danziger.

Schwarz asserted that like surrealism, the Kabbalah and other “esoteric systems” underlined that “art, like poetry and love, is also an instrument of knowledge.” He cited Barnett Newman, an American painter of Polish Jewish origin, that modern painters try to “dig into metaphysical secrets” to create “religious art which through symbols will catch the basic truth of life which is its sense of tragedy.”

As a lifelong celebrant of art, Schwarz followed what he saw as the Kabbalistic message that art should illuminate and not just dazzle with its beauty. In Israel, he claimed to identify many artists influenced by such thinking.

In the same essay, Schwarz also quoted the German Jewish philosopher Ernst Cassirer, who opined in a 1944 article, “Judaism and The Modern Political Myths” in “Contemporary Jewish Record,” that Judaism “took the first decisive step from a mythical religion to an ethical religion.”

Schwarz alluded to a comment by Albert Einstein that Jewish tradition featured the “pursuit of knowledge for its own sake, an almost fanatical love of justice and the desire for personal independence.”

Not believing in private property, Schwarz collected as a form of uniting and shedding light on objects he found revelatory, so by the mid-1970s, when he closed his gallery, he was ready to donate most of what he had accumulated to museums. Italian institutions were reticent about accepting these gifts, with one politician terming a collection of over two thousand pioneering surrealist texts to be “pornographic crap,” so even more was presented to Israeli institutions than had been initially intended.

So altruistic was Schwarz about his donations that in 2018, when the Israel Museum deaccessioned a few dozen of the over 800 works he had given them, he approved of their decision. Schwarz declared selflessly: “It is my greatest joy to see the continued growth of the collection. Realizing the Museum’s developing nature, I support its carefully implemented deaccession policy, yielding funds toward the purchase of new works in the spirit of my collection, and enabling the Museum’s Modern Art Department to refine its collection for the benefit of all.”

He took the occasion to repeat the basic motivation for his generosity:

“Though I am an agnostic, I am profoundly attached to the ethical values of Judaism. For us, a good act is a commandment. Besides, I feel it is immoral for a private person to keep hold of something which the community could enjoy.”

Obeying these imperatives, Schwarz had donated money in 1993 to the Israel Museum to make possible acquisitions by new Israeli artists whom he helped recommend. Other works from his donation remaining in the collection include those by Erwin Blumenfeld, an American photographer of German Jewish origin, the Israeli painter Michael Sgan-Cohen, and many others.

In this way, almost a century of concentrated personal thought about Jewish ethics and tradition resulted in a wide-ranging artistic legacy to be enjoyed by future generations.