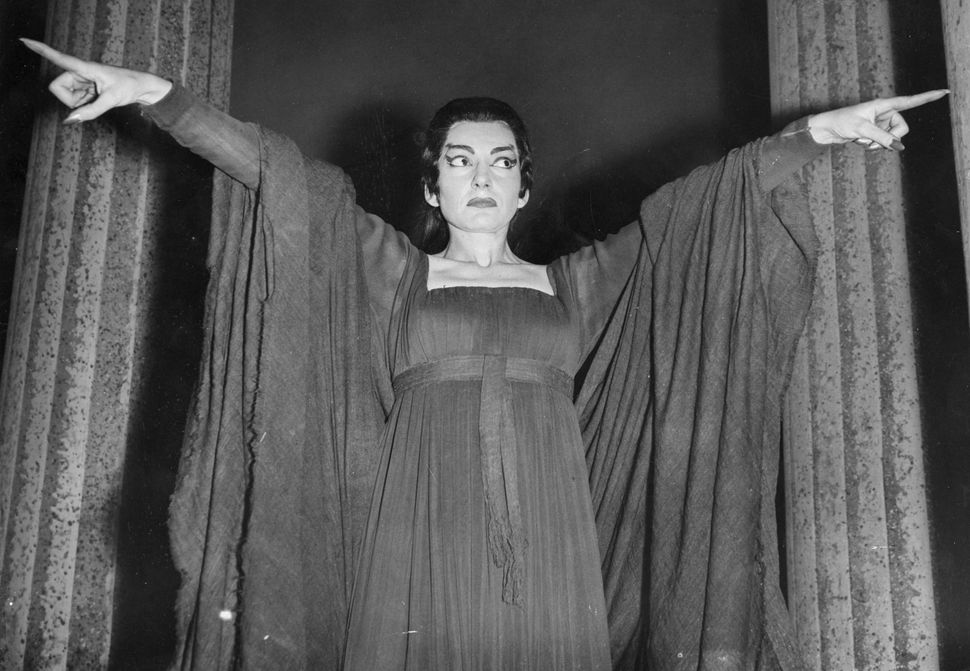 For decades, devotees have adulated the soprano Maria Callas. who was regularly compared to the 19th century Italian Jewish diva Giuditta Pasta, in terms of the works she performed and her stage impact.

Worshipers who knew Callas personally were even more ardent. Leo Lerman, an editor for Condé Nast Publications, bemoaned the waste of his own talent working for magazines rather than writing books, something akin to Callas’s late-career abandonment of professional ambitions for a relationship with the shipping magnate Aristotle Onassis.

Yet Lerman obsessively invited celebrity friends to his Manhattan apartment, including a 1956 “Chinese Supper for Maria Callas” where other guests included the conductor Leonard Bernstein and City Ballet cofounder Lincoln Kirstein. Bernstein and Callas sat next to each other and spent the evening exchanging high decibel compliments.

Three years earlier, Lerman had attended a Callas performance of Verdi’s “La Traviata” in Venice and was transfixed by the “most haunting voice I have ever heard. It is filled with lost joys, permeated with present despairs. Here is desperate frivolity, and here is unavoidable tragedy.”

Callas was a great star, so why wasn’t she happy, asks a recent Oxford University Press book by a Wellesley College professor of psychology.

The question may be misplaced, insofar as Callas’ life and work, like the art of opera itself, were basically all about tsuris.

Acceptance of the inevitability of grief, an aural equivalent of the title of Sholem Aleichem’s 1920 play “It’s Hard to be a Jew” (Shver tsu zayn a yid) likewise characterized Callas’s rapport with Jewish colleagues.

In 1947, she appeared to accept letting Richard Tucker (born Rivn Ticker in Williamsburg) outshine her during renditions of Ponchielli’s opera “La Gioconda” in Italy.

Yet not all Jewish tenors would be so favored. Four years later, at a Mexico City performance of Verdi’s “Aida,” Callas initially rejected the opera house director’s request that she add high notes to thrill the audience, following in the tradition of a 19th century Mexican soprano. Yet after the German Jewish tenor Kurt Baum, her performance partner, interpolated unwritten high notes into his role, she reportedly changed her mind. To overshadow Baum’s showboating, Callas shrieked a sustained high E-flat for several seconds during the Triumphal Scene of “Aida,” bringing down the house.

Despite this and subsequent lapses in musical taste, Callas’ career progressed, helped by the Jewish recording producers Dario and Dorle Soria, founders of Cetra-Soria Records.

A master publicist, Dorle Soria boosted Callas’s fame in America. She and her Italian husband Dario masterminded a “flamboyant but tasteful advertising campaign” to introduce Callas to US consumers as “The Queen of Opera” and “the Divine,” according to the Hungarian Jewish music historian George Jellinek.

After the Austrian Jewish impresario Rudolf Bing signed Callas to perform at New York’s Metropolitan Opera, the Sorias organized a lavish party celebrating the occasion, and repeated the festivities for her first bow at the Lyric Opera of Chicago.

By then she had been signed to a recording contract with EMI by English Jewish record producer Walter Legge. A few years later, in the waning phase of her career, Callas reportedly looked to Vera Rózsa, a Hungarian Jewish vocal coach noted for working miracles, to revive her faded singing abilities. But Callas would die suddenly in 1977 at age 53 before she could take advantage of Rózsa’s expertise.

Later writers have freely associated these and other tragic elements of Callas’s world with aspects of Yiddishkeit, as if Callas’ destiny and Jewish tragedy were indissociable.

Bidart’s poem is based on a real-life case history by the eminent Swiss Jewish psychiatrist Ludwig Binswanger. Giving his patient the neutral, non-Jewish sounding pseudonym of Ellen West, Binswanger’s account did not refer to Callas since the diva made her professional debut in 1941 and his patient West died in 1921.

Yet with poetic license, Bidart made the conjuncture convincing by having West address Callas’s slimming down and other esthetic choices in a way indirectly echoing the acorporeal essence of divinity in Jewish tradition:

“Callas is my favorite singer, but I’ve only/ seen her once—;/ I’ve never forgotten that night …/ —It was in ‘Tosca,’ she had long before lost weight, her voice/ had been, for years,/ deteriorating, half itself …/ When her career began, of course, she was fat,/ enormous—; in the early photographs,/ sometimes I almost don’t recognize her …/ The voice too then was enormous—/ healthy; robust; subtle; but capable of/ crude effects, even vulgar,/ almost out of/ high spirits, too much health …/ —She must know that now/ she probably would not do a trill in/ exactly that way,— / that the whole sound,/ atmosphere,/ dramaturgy of her recordings/ have just slightly become those of the past …/ —Is it bitter? Does her soul/ tell her/ that she was an idiot ever to think/ anything/ material wholly could satisfy? …/ —Perhaps it says: The only way/ to escape/ the History of Styles/ is not to have a body.”

In the story, an unnamed Jewish Harvard graduate student from Alexandria, Egypt (Aciman’s birthplace) socializes with other privileged Harvard friends. They learn from a radio broadcast that Maria Callas had died that same day in Paris: “It put a damper on everything…The talk turned to Callas, and because I owned a few recordings, I decided to play two to three arias, trying as best as I could to explain why she was prima donna assoluta.”

By doing so, the narrator alienates another friend, a working-class Tunisian Jew named Kalaj, who like other Middle Eastern Jews, considered the Egyptian popular music diva Oum Kalsoum as nonpareil.

Even more extensive use of Callas’s impact in a Jewish context may be found in the 1999 play “Spoonface Steinberg” by the English writer Lee Hall, who won fame as the creator of “Billy Elliot.”

In Hall’s drama, which premiered in London and was staged internationally, Spoonface Steinberg is a 9-year-old Jewish girl afflicted with terminal cancer. She discusses at length her obsession with recordings by Maria Callas with a Jewish attending physician, Dr. Bernstein. The doctor adds historical context for Steinberg about the demise of Callas and the characters she incarnated onstage, contrasted with the fate of Jews murdered during the Holocaust.

Ultimately, for Jewish listeners as well as readers of plays and poetry, Callas is a quintessential tragic voice that has transcended time and mortality.