For Laurel and Hardy, a surprisingly deep Jewish history 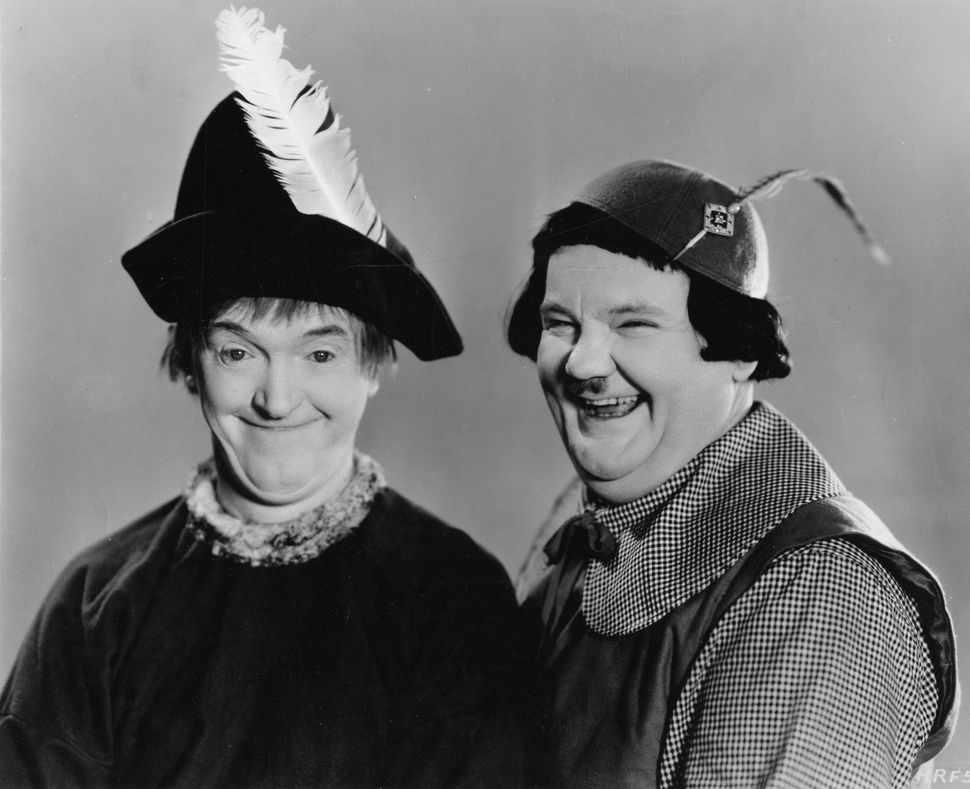 This year marks the 100th anniversary of the first appearance in the same film, “The Lucky Dog” (1921) by Stan Laurel and Oliver Hardy, the comedy duo whose work featured a surprising amount of Yiddishkeit.

At the start of the 1930 film “Blotto,” during a moment of domestic discord, Laurel puzzles over a Yiddish newspaper, “Yiddishe Welt” (Jewish World).

“Die Yiddishe Velt” was Cleveland’s main Yiddish-language newspaper for many years, and given the hasty and cheap production schedules of Laurel and Hardy films, an actual copy of the journal belonging to one of the studio staff, perhaps a Clevelander, may have been used.

The paper has a banner headline about a 1928 Latin American goodwill flight by pilot Charles Lindbergh following his solo crossing of the Atlantic.

Laurel holds up the paper, which mentions rainy and foggy conditions for the flight from Cuba to St. Louis.

There is retrospective irony in this applause from the Yiddish press for the achievements of Lindbergh, later accused of antisemitism and Nazi sympathies, but it is not the main message conveyed by the presence of a Yiddish newspaper in the Laurel household.

Instead, the joke is how long it takes the Laurel character to realize he is studying a newspaper printed in a language he cannot read, before with an irked glance at his complaining wife, he crumples up the paper and tosses it aside.

Devoted fans have wondered whether there is any implication that Laurel’s wife in the film might be Jewish, but this may be carrying analysis too far in what was not intended to be comedy of Joycean complexity.

After all, Laurel and Hardy got their start in movies working with some rough and tumble Jewish slapstick clowns.

For example, Larry Semon, who was born in Mississippi. The son of an itinerant Jewish vaudeville magician who billed herself as Zera the Great, Semon and his elastic facial features and violent pratfalls were featured in dozens of short films beginning in 1915. 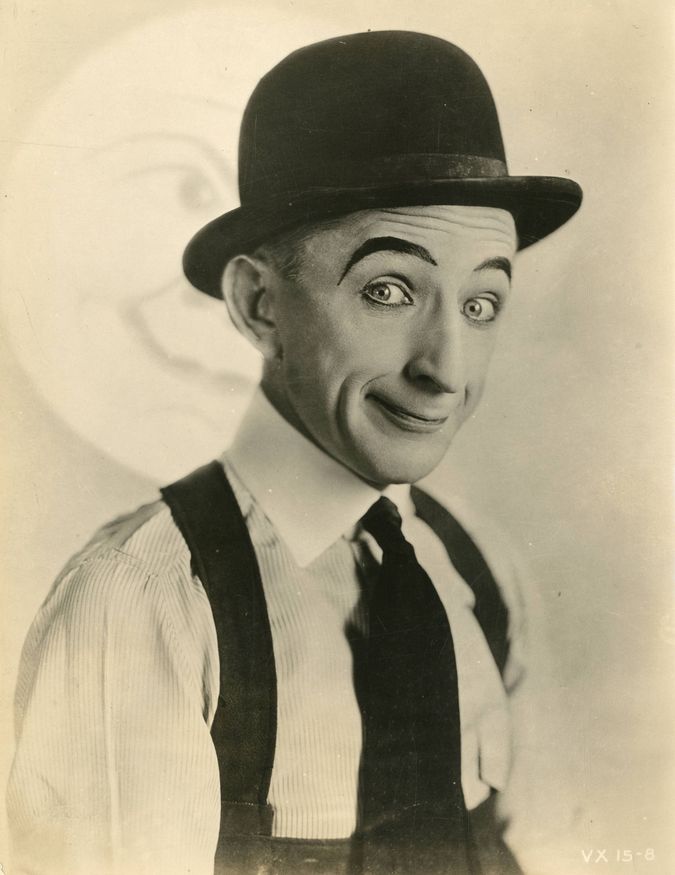 Jewish Vaudevillian: The son of an itinerant Jewish vaudeville magician who billed herself as Zera the Great, Larry Semon appeared with both Laurel and Hardy before they became a duo. By Wikimedia Commons

Starting their own careers in film and not yet paired up, both Laurel and Hardy worked individually with Semon.

In the 1918 short “Frauds and Frenzies,” Semon costarred with a young and unusually athletic Laurel, still in his twenties, as escapees from a chain gang who woo the warden’s daughter.

Similarly, in a 1922 Semon short, “The Sawmill,” a manual laborer tries to attract the romantic attention of his boss’s daughter while evading a bullying foreman, played by Hardy, who was often cast in villainous roles early on.

Semon’s career would be halted by a habit of high-budget extravagance, when he briefly gained control of the production side of his films. By contrast, Laurel and Hardy never enjoyed any such power, but remained salaried employees of studio bosses for their entire careers, with the result that their lives ended in penury.

This was the fate of many celebrated silent film comedians, apart from a privileged few such as Charlie Chaplin and Harold Lloyd, who dealt with the business aspects of being funny as productively as the creation of gags.

For years, Laurel and Hardy were simply employees of the Hal Roach studios, where the director Leo McCarey paired them and helped develop their onscreen personae. Around the same time, McCarey was also assigned to produce a series of films with the Jewish actor, Max Davidson.

A scruffy, unkempt immigrant caricature in movies, Davidson was born in Berlin but moved to America before the turn of the century as a vaudevillian. Davidson began to make movies in 1912, and soon starred in comedy shorts like “How Izzy Was Saved” and “Izzy’s Night Out.”

In the 1920s, working for Hal Roach, he appeared as Isaac Goldberg, a wily lawyer in “Get ‘Em Young”(1926) in which Laurel has a supporting role as a drunken butler who dresses in drag to pose as a bride.

Davidson was also in films with Oliver Hardy, such as “Why Girls Say No” and “Love ‘Em and Feed ‘Em,” both from 1927.

Laurel even wrote the script for a Davidson short comedy, “Jewish Prudence” (1927) in which a Jewish father urges his son to commit insurance fraud after a car accident.

From their work with Semon and Davidson, Laurel and Hardy would be reminded of the evanescence of Hollywood fame. In their personal lives too, impermanence was a feature, with multiple marriages for both.

Hardy’s first wife was Madelyn Saloshin, a Jewish pianist whom he met in his native Georgia. Hardy’s biographer Simon Louvish posits that the marriage may have been troubled because of its historical context.

In 1913, the same year that Hardy wed Madelyn Saloshin, the state of Georgia prosecuted Leo Frank, a Jewish factory owner, for the rape and murder of a Catholic female employee. Frank was convicted and sentenced to death, wrongly as historians now concur. Two years later, before the sentence could be carried out, Frank was lynched by an angry mob.

By then, Hardy and his spouse had relocated to Florida, apparently to begin life anew some distance away from his family who may have disapproved of his alliance with a Jewish woman.

These professional and personal connections would reecho decades later in July 1963, some years after the death of Hardy. Laurel, living in modest retirement in a down-market Santa Monica apartment, wrote to William Brown, a Canadian superfan who engaged him in extensive correspondence.

Brown must have alluded to the rise of postwar antisemitism in Canada, as later described by historian Ira Robinson.

During May 1963, swastikas and messages such as “Jew Die” were scrawled on synagogues in downtown Toronto. The following month, a man in Winnipeg Beach, a resort town in the Interlake Region in the Canadian province of Manitoba, was charged with shouting antisemitic slogans over a loudspeaker from his car as he drove through town.

An oral history of Jewish life in the region alleges that Winnipeg Beach was a center for anti-Semitic feeling, possibly in part due to the presence of a large Ukrainian population. Supposedly locals would routinely exclaim, “Thank God, the summer’s over with all those Jews,” referring to the annual influx of Canadian Jewish vacationers.

Responding to his fan’s allusion to the Winnipeg Beach incident, Laurel wrote with highly individual grammar and spelling:

“That anti-semitism situation sounds pretty bad. I don’t know why those swasticka groups are allowed to function should’nt be allowed PERIOD. A bunch of trouble makers – this discrimination business is shocking.”

Then Laurel’s mind wandered to comic themes, harkening back to the unsubtle ethnic humor of the heyday of Max Davison. Responding to William Brown’s plaint that he could not decide where to go on vacation, Laurel added: “Note you do’nt know where to go for a holiday – why don’t you make up as a ‘Heeb’ & spend a month at Winnipeg Beach?!!!! change your name to Irving Brownski.!”

This good-natured ribbing from an ailing Laurel, who would die less than two years later, epitomizes a world of now unacceptable laughs that provided at least a temporary living for generations of Jewish performers and their immortal comic cohorts.

For Laurel and Hardy, a surprisingly deep Jewish history