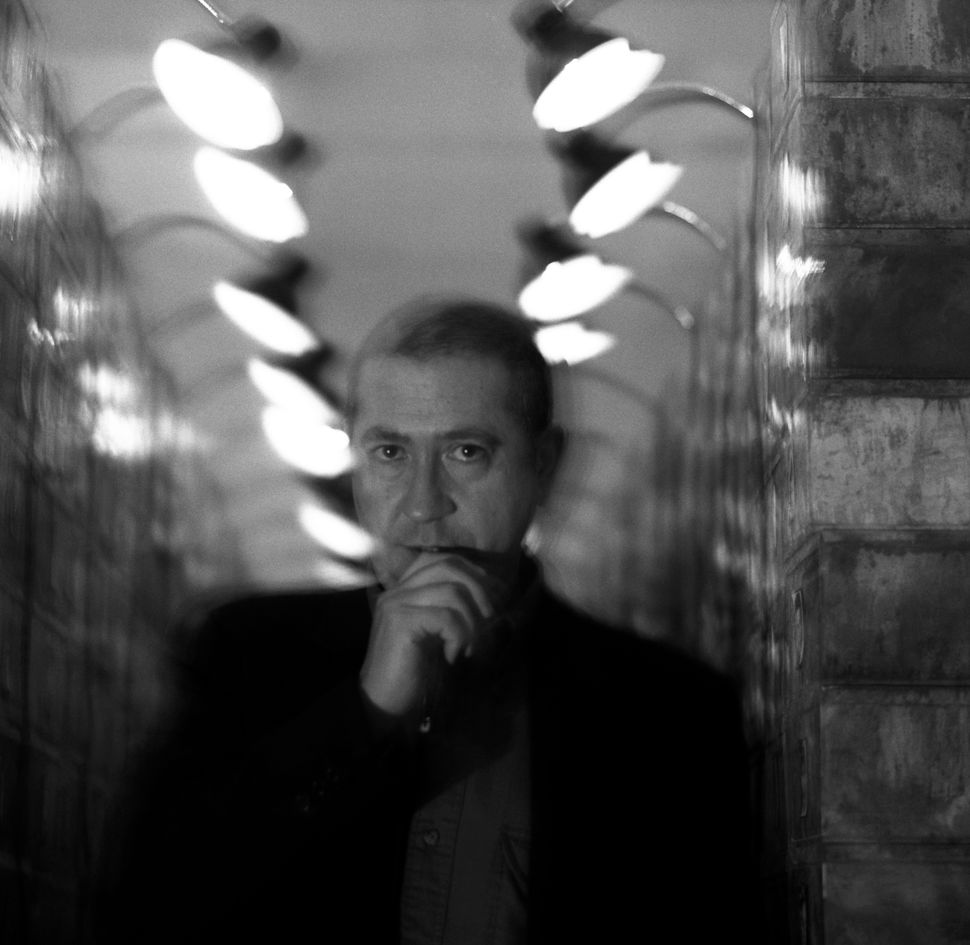 The French artist Christian Boltanski, who died on Bastille Day at age 76, expressed emotions through conceptual art associated with Judaism as well as universal experience.

His Ukrainian Jewish father escaped deportation during the Nazi Occupation of Paris by hiding in a space under the floorboards of the family apartment for 18 months.

Boltanski’s mother, stricken by polio wrote under the pen name Annie Lauran. To protect her husband, she staged a mock quarrel with him to convince neighbors that the couple had separated.

This charade was only partially successful, as Boltanski would later recall. A Parisian neighbor complained that Vichy anti-Jewish legislation supposedly forbade Jews from owning pets, and if the Boltanski family cat continuing bothering him, he would denounce them to the authorities. 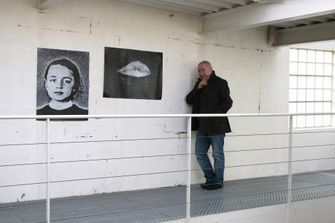 In His Atelier: The artist Christian Boltanski, circa 2009. By Getty Images

Boltanski’s nephew Christophe recounted some of this family history in the 2015 novel “The Safe House.”

Such tales of high drama and daily banalities were an inescapable part of Boltanski’s young years, and his artwork would duly juxtapose humdrum items with overwhelming historical tragedy.

His “Altar to the Chases High School” (1987), now in the collection of Israel’s Jewish Museum, consists of 18 framed images of Jewish students who graduated from a high school in Vienna in 1931, each rephotographed from a book by the Austrian Jewish filmmaker Ruth Beckermann on the fate of Viennese Jews.

In another series of installations, entitled “The Purim Festival,” Boltanski abstracted and enlarged faces from a 1939 photograph of a Purim party at a European Jewish school, where the children’s delight with their costumes is poignantly overshadowed by ominous events on the horizon.

Yet far from exclusively dwelling on looming tragedy, Boltanski’s art, like his 2018 retrospective at the Israel Museum, was also diverting and enthralling. In a new video work, “Animitas,” 300 bells were distributed over a 200 square meter area in the cliffs overlooking the Dead Sea. In another conceptual work, shelves were filled with phone books from different regions and eras of Israel, and museum visitors were invited to look up listings past and present for their friends and family.

An ongoing work compiling sound recordings of heartbeats was augmented with Jerusalem passersby having the sound of their heartbeats taped to add to the artist’s archive. Consciousness of past ghosts and the transitory essence of human life made Boltanski celebrate vitality while it lasted. He particularly enjoyed indulging in French cuisine washed down with Polish cherry vodka.

He was loquacious about his Jewish roots with journalists; he told the French daily Libération in 2010 that his approach to teaching art was to try to be a “Hasidic rabbi. I attempt to ask questions and have people ask me questions in return.”

To divulge traumas discussed throughout his childhood, he rejected literature as an artistic vehicle; he never read his mother’s books, claiming that it would be impossible for him to judge her as a writer. Instead, he became a self-taught artist.

With a contrarian spirit, he would sometimes surprise interlocutors. When he arrived in Japan, one art critic explained that a colleague was staring at Boltanski because he had never before seen a Jew. Boltanski took the occasion to deny being Jewish. In a comparable way, when one American reporter quickly identified him as a Jewish artist, Boltanski objected: “Not at all, I’m Corsican!”

As he specified during a retrospective at Paris’s Pompidou Center last year, Boltanski felt that only the French Jewish documentarian Claude Lanzmann was able to make coherent artistic statements about the Holocaust.

Instead, Boltanski sought to refer to universality with his art, rather than specific events. He also shunned literary references, as he felt there were no words to describe some human ordeals.

His father’s death in 1983 made him “take another look at” his own Jewish roots, but he continued to prefer allusiveness and generalities in his art, rather than basing his creativity on any documents immediately linked to the Holocaust.

Even without such heartbreaking links, memories awakened by his artworks could be haunting. One installation consisted of vast piles of clothing, evoking for some museumgoers the Nazi storehouses of garments and other objects taken from murdered victims.

The ambient tragedy that informed his works suited his repeated quasi-Gnostic claim that the creator of the world must have been a malevolent or oblivious demiurge to allow so many horrors to occur. As Boltanski succinctly put it, “God is an old bastard.”

Yet to complement this somberness, he lightened his conceptions with an element of triviality, believing that it would be indecent and unseemly to focus directly on the Holocaust theme, despite its importance in his own life.

Boltanski read memoirs by Primo Levi, whose message, he concluded, was that “even in the concentration camps, life continued.”

Loving and loathing life at the same time, Boltanski contrasted his approach to conveying modern historical grief with that of weighty tragic canvases by the German painter Anselm Kiefer. Boltanski likened Kiefer to a “fellow marching forward,” unlike Boltanski himself, who was more like “a Jew who is fleeing. [Kiefer] is strength, I am weakness.”

Failing to identify with Kiefer, Bolstanski considered himself closer to the American Jewish conceptual artist Lawrence Weiner. In 2010, Boltanski told “Museo Magazine” that Weiner was the “last Jewish artist, because he exhibits stories – there’s always question and question and question in Lawrence’s work. And the fact that he refuses to use images and only uses words is also from the Jewish tradition.”

Sometimes Boltanski’s admiration of what he saw as Jewish virtues bordered on the incoherent, as when he claimed to Libération: “In Jewish culture, when we ask whether we should scratch our nose or our ear, we scratch both, and when Jews applied this approach to science and philosophy as well as to religion, prodigious results occurred, such as Freud and Marx.”

Despite his readiness to be interviewed, Boltanski’s inspiration was basically non-verbal. So trying to parse his logic in such a statement might just leave Jewish readers baffled, possibly to the point of scratching their ears or noses.

Yet as everywhere, Boltanski cherished the balance between the derisory and the tragic. To describe his own approach to conceptual art, he enjoyed quoting North Vietnam’s General Võ Nguyên Giáp who led his forces against the French military at the decisive Battle of Dien Bien Phu in 1954: “The more space we occupy, the less strength we have. The more strength we acquire, the less space we have.”

Naturally, there were few concrete similarities between General Giáp and Boltanski, who when not traveling the world to organize his art exhibits, slouched around a dilapidated studio in the scruffy Paris suburb of Malakoff, sometimes watching television for days on end with the sound turned off to muster up inspiration.

Yet likening himself to both a Vietnamese military authority and a Hasidic rabbi was typical of Boltanski’s mixed self-imagery that produced so many wide-ranging works of lasting impact and value, capturing modern Jewish experience.