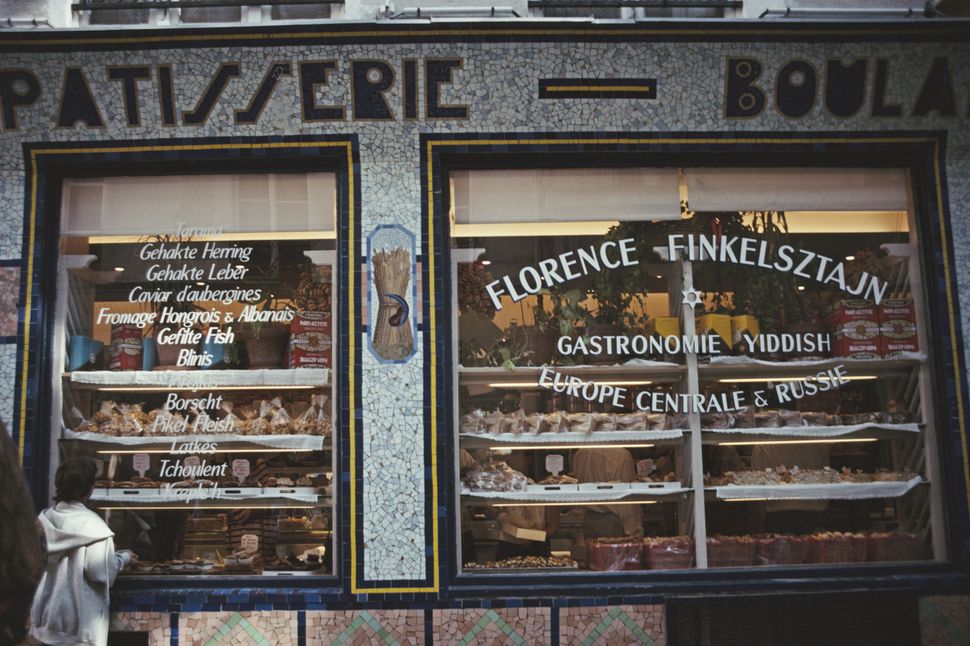 The Marais district in Paris — circa 1990 Image by Getty Images

The pandemic had me fearing I might die without getting to use my miles. Soon after it was announced that France was reopening, our son, whose wife grew up there, said, “We’re taking the baby to Paris. Want to come?” Since I’m a Jewish mother and now the grandmother of an adorable 20-month-old, he had me at “Want.”

I was over the top excited, but the guilt so familiar to those of us in the tribe was topped by flygkam, the Swedish word for “flight shame.” A group of celebrities that includes Olympic gold medalist Bjorn Ferry and the musician Malena Enman (mother of climate activist Greta Thunberg) has been trying to discourage people from flying. Airplane emissions have been a major factor in climate change. But I was 79 and I might not have another opportunity to vacation with my family, so I cast this as an extenuating circumstance and started searching for cheap bistros.

Friends reacted with surprise. They knew my husband Martin and I had done nothing riskier than shop for food, double masking and sanitizing between touching the blueberries and bananas. If we’d owned hazmat suits, we would have put them on. I explained that we’d been vaccinated and this was an offer we couldn’t refuse.

Having reached the age where you stop saving things for the future, we splurged, using extra miles so we could be in Premium Economy. Though osteopenia has shortened me to a scant 5’1, I’d never been able to uncurl my legs on a flight, wishing I could put them in the overhead rack.

Arriving in Paris, we discovered the locals relishing their release from confinement, clearly appreciating that the 9 PM curfew had been extended to 11PM. Walking in the Marais, I asked Martin, “Do you notice anything different?”

“All the women are in sneakers. Maybe they’re government issues.” He shrugged. “And they’ve given up scarves. You can’t tell the natives from the tourists.”

“I’m not sure there are any tourists,” he said. French was the only language we were hearing. Martin felt especially connected to Paris, where his grandfather had been a rabbi and his father lived after the war. He still had cousins there. Turning onto the Rue des Rosiers, he said, “Three generations of my family have walked on this street.”

I was hit with the same melancholia I feel on New York’s Lower East Side, missing the Yiddish atmosphere that was so much a part of my childhood home. In both neighborhoods, a bearded man was more likely to sport a tattoo than a yarmulke. Kosher restaurants, falafel-diners and bakeries had been replaced by trendy boutiques. I was saddened by the diminished Jewish presence in the city, missing Paris’ historical Goldenberg’s, the restaurant that was opened by a Holocaust survivor who’d lost his family at Auschwitz. Shuttered in 2006, it had been a meeting place for other survivors and a tourist attraction until the 1982 antisemitic terrorist attack that killed six and injured more than 20. The dead were commemorated in a plaque, a reminder of the atrocities committed toward the Jewish community here. 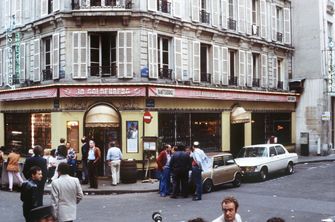 In 1982: Goldenberg’s was opened by a Holocaust survivor who’d lost his family at Auschwitz. Shuttered in 2006, it had been a meeting place for other survivors and a tourist attraction until a deadly 1982 antisemitic terrorist attack. By Getty Images

There were “soldes” signs in every window advertising the summer sales, but shopping – even at 50 percent off – wasn’t worth taking time off from what we were experiencing. I cherished each event, kvelling as our granddaughter waved to us on her first merry-go-round ride in the Luxembourg Gardens, devoured a crepe and came down a slide in Place des Vosges. It felt like a mitzvah that we could go to dinner early and take care of her, so our son and daughter-in-law could go out on their own. We took the baby to a bistro, where she laughed and lifted her bottle of milk to toast my glass of Chablis. She was delighted when the waiter brought over an enormous stuffed teddy bear for her to play with while she sipped onion soup.

As a parent, I knew how quickly time flies by. I remembered telling my son when he was in high school, “If I had one wish, it would be to get you back at each age for a few days.”

He’d scoffed, “You’d choose that over curing a terrible disease?”

“I wouldn’t be the only one getting a wish,” I said. “Someone else will find the cure. They won’t care about you.”

As grandparents in France, Martin and I were exploding with joie de vivre. I rationalized that our two international flights would have given off the same horrific emissions with or without us. I tried to deal with my guilt by justifying that we were entitled to treat ourselves to this most extraordinary experience. When I returned home, I would continue to recycle, be conscientious about saving water and not order from Amazon. This trip allowed us to bond even more intimately with our granddaughter and the photos will be there for her long after we’re gone.