For 50 years of Greenpeace, inspiration from Jewish values and visionaries 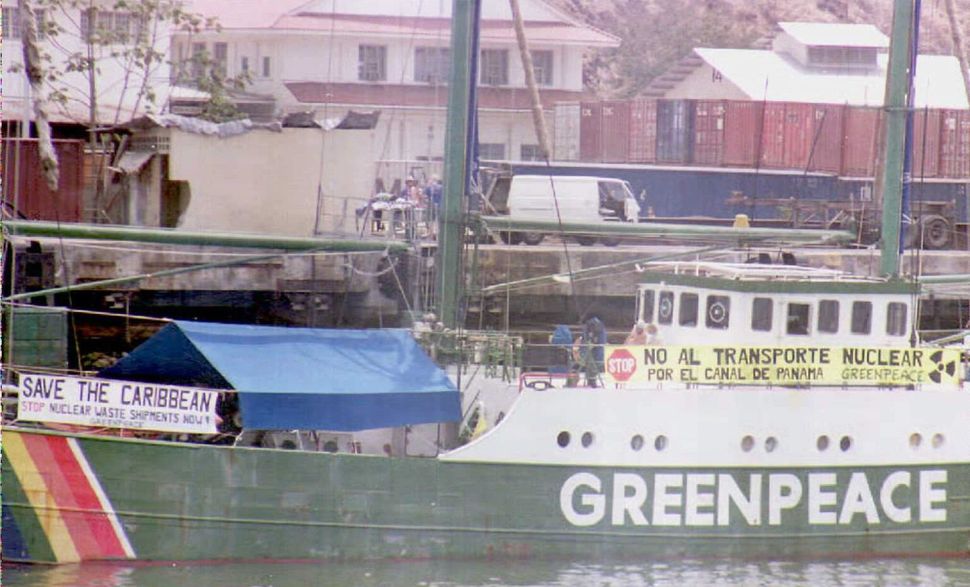 This year, as Greenpeace celebrates 50 years of environmental activism, it’s a good time for a look at the powerful Jewish inspirations that have helped to inspire the non-governmental organization throughout its history.

With the stated goal of ensuring the ability of the Earth to “nurture life in all its diversity,” Greenpeace campaigns on issues such as climate change, deforestation, overfishing, commercial whaling, genetic engineering and nuclear proliferation.

Greenpeace’s cofounders, including Irving Stowe (born Strasmich in Rhode Island) and his wife Dorothy, were motivated by the fear of nuclear disaster during 1960s Cold War paranoia, as expressed in the film “Doctor Strangelove.”](https://www.amazon.com/Calling-Dr-Strangelove-Influence-Masterpiece/dp/0786494492/?tag=thefor03-20) directed by Stanley Kubrick.

They were also influenced by the ecological writings of Barry Commoner a scientist whose uncle Avrahm Yarmolinsky, a librarian and author, advised Commoner’s family to change the spelling of their name from the foreign-looking Comenar to avoid antisemitic attacks.

Commoner published findings about potential health consequences of nuclear testing that galvanized Irving Strasmich, a tax lawyer whose civil rights interests were so pronounced that after he eloped with Dorothy Rabinowitz, the couple attended an NAACP benefit dinner on their wedding night.

While still in Providence, Rhode Island, Stowe had protested against civil defense exercises by refusing to take shelter when warning sirens sounded.

In 1961, fleeing with their family what they considered psychologically scarring and futile nuclear war preparation exercises required of all U.S. citizens, they relocated to New Zealand, supposedly outside the range of potential nuclear war.

Imitating the example of the Commoner family, in New Zealand where Jews were officially unwelcome around the time of the Holocaust, they chose the family name Stowe, to better blend in with Anglo-Saxon culture in an insular society.

This choice was made to honor Harriet Beecher Stowe, the Quaker author of “Uncle Tom’s Cabin,” a novel so influential in its pleas for human rights that Israeli prime minister David Ben Gurion claimed that reading it turned him into a socialist.

A noted philosemite, Stowe wrote to the English novelist George Eliot in 1869 to congratulate her on the novel “Daniel Deronda,” with a Jewish protagonist and Eliot’s effort to “treat Jews sympathetically in hope of countering some of the English stupidity concerning them.”

Although they were not believers, Irving and Dorothy Stowe adopted Quaker observances, which in the requirement to bear witness in a communal setting have been likened to the Mosaic covenant.

However, their refuge became compromised in the mid-1960s when New Zealand sent troops to Vietnam and France began nuclear testing in Polynesia, in their adopted part of the world.

The Stowes relocated to Vancouver in Canada, another country that had refused to admit Jewish refugees during the Second World War with the notorious governmental slogan, “None is too many” in response to the question of how many Jews fleeing for their lives should be accepted.

As they were not refugees, but professionals (Dorothy Stowe was a psychiatric social worker) they settled in a house in a now-trendy neighborhood. There, Irving Stowe cultivated local media, especially at the alternative Vancouver publication The Georgia Straight, cofounded by the Chicago-born Jewish author Stan Persky

When he wasn’t writing for The Georgia Straight, Stowe hosted endless discussions with fellow activists, where he was known to hold forth for hours. On one occasion, the group resolved to protest planned U.S. nuclear testing on Amchitka Island in the Aleutian Islands of southwest Alaska.

Stowe was unable to join the small boat of protestors due to seasickness and Dorothy was not allowed to go because the rented boat’s captain refused to transport women aboard. Instead, Stowe raised money for the project by organizing and publicizing a concert, starring performers such as Phil Ochs, the American Jewish protest singer. Ochs caused controversy by exclaiming onstage at the event: “Geez, I’ve never played in a police state before.”

Ochs, was booed by his counterculture, but patriotic, Canadian audience. He had been referring to the newly implemented War Measures Act during the so-called October Crisis, suspending civil liberties in response to kidnappings of Canadian officials by militants from a Quebec separatist group.

Robert Hunter, a Canadian environmental journalist, recalled that Stowe was a dauntless organizer, even capable of vanquishing objections from Trotskyites that the benefit concert tickets were priced too high at less than two and a half U.S. dollars each.

“Stowe was a tightfisted, efficient treasurer. He would not allow so much as a penny to go unaccounted for,” Hunter said. “He did wonders with money, and very little time got wasted wondering where it had gone. Everybody knew that Irving Stowe knew, and he was incorruptible.”

In a eulogy published by The Vancouver Sun after the incorruptible Stowe died at age 59, Hunter added: “No one could say that Irving wasted his time here [on earth]. He expended himself fully. He contributed precisely as much as he could. When other men were lying back, waiting to see what nightmare would materialize next, Irving was moving like a human whirlwind toward the goal of heading the nightmare off.”

Shortly before the protest boat was launched, Stowe headed the nightmare off with a flurry of interviews and media appearances, during which he excoriated America’s involvement in the Vietnam War during the Nixon era.

Stowe cited his refusal to pay taxes that subsidized the war, U.S. political corruption and what he termed “creeping fascism.”

Other protestors began to worry that Stowe’s vehement critiques of American imperialism might put off some listeners, but Canadians were won over by sheer contrariness when the Hollywood actor John Wayne, who was visiting the nearby harbor of Victoria, remarked about the Amchitka protest boat project: “They’re a bunch of Commies. Canadians should mind their own business.

As Canadians declined to follow Wayne’s advice, Stowe’s viewpoints appeared sympathetic by comparison, although he would later encounter more criticism for erroneously believing Maoist propaganda about the Cultural Revolution in China during the 1970s, as did many leftists of the day.

One of the passengers on the rickety protest boat bound for Amchitka was Richard A. Fineberg a political science instructor at the University of Alaska, now an independent investigative journalist in Alaska specializing in petroleum development-related issues.

Fineberg’s shipmates reportedly diverted themselves during the chilly voyage by debating the merits of the German Jewish sociologist Herbert Marcuse, whose political theories were much in vogue.

Hunter brought along for the ride “Warriors of the Rainbow,” a book presented to him by a Jewish dulcimer maker in Vancouver, adding another Jewish connection to the mix.

This volume compiled native American prophecies and myths, including a Cree legend about Eyes of Fire, a grandmother who explains to her grandson that white colonizers destroyed the environment and defeated native Americans so that the latter could be “cleansed of all selfish pride” and prepared for the “great awakening” of ecological awareness and pristine landscapes.

While 2018 research published in Sociology of Religion suggests that observant Jews may be motivated towards, but also inhibited from, environmental action by religious belief, there is no doubt that Irving and Dorothy Stowe and friends launched a lasting environmental movement replete with Yiddishkeit.

Even today, Dima Litvinov, one of the group’s leaders, displays noteworthy yichus as son of Soviet Jewish dissident Pavel Litvinov.

For 50 years of Greenpeace, inspiration from Jewish values and visionaries