Governer Lehman meets with athletes at the Athletic Carnival on Randall’s island. Courtesy of Forverts Archive

The modern Olympic games, first held in Athens in the summer of 1896, predate the Forward’s founding by less than one year. In the 52 winter and summer games to take place since, the Jewish stories have ranged from tales of perseverance and success, as in the victories of Jewish athletes like Mark Spitz and Aly Raisman, to profound tragedy, most notably the killing of Israeli team members by Palestinian militants at the 1972 Munich games.

Marty Glickman, one of the few Jews who travelled to Berlin with the American team was at the last minute replaced by Jesse Owens. Courtesy of Forverts Archive

But of all those games, for Jews, one will always be most infamous: Hitler’s 1936 Summer Olympics in Berlin. And as this year’s summer Olympics begins in Tokyo, a city that was once the capital of an Axis power, we decided to look back on how we covered that notorious event.

What we found: While the event has gained ignominy in history, a dive into the Forward’s archives reveals that at the time, the paper hardly covered it at all. Instead, we focused our attention on an event largely forgotten by history: the World Labor Athletic Carnival, put on by the Jewish Labor Committee (JLC) at New York’s Randall Island Stadium — today, Icahn Stadium — as an alternative to Hitler’s games. It’s easy to imagine that a major international event like the Berlin Olympics, with the uniquely Jewish layers of political complexity it held, might have been a sure subject of interest in the Forward’s pages. Its relative absence can only be read as a conscious choice to deny a platform to fascism and, give voice, instead, to a resistance movement.

Germany was picked as the 1936 Olympic host in 1931, before the Nazis rose to power. With Hitler in office, Jews were almost entirely prevented from participating in the games. Countries looking to appease or curry favor with the Reich did not want to offend the host nation by running afoul of the Nazi’s antisemitic policies.

The games ran between August 1 and 17, 1936, during which time the Forward printed only six articles about them. Most of that coverage was focused on the politics of the games, Hitler’s presence and antisemitism, rather than the sporting events themselves.The Nazis treated the games as an opportunity to spread their propaganda of Aryan supremacy, including through the making of Leni Riefenstahl’s documentary about them, “Olympia.” But looking back, it’s clear that many American Jews didn’t want to give them any more attention than absolutely necessary.

“In all the factories, in the working class neighborhoods, in the English and Yiddish press, all anyone is talking about now is the great sports carnival of the labor movement in New York,” noted one Forverts article, which also stated that tens of thousands were expected to spend Saturday and Sunday in the city watching the event.

“Among the celebrities coming specially to the sports carnival will be New York’s governor, Herbert Lehman, who will present a ‘loving cup’ with his inscription to the winners.” The Forward reported. Mayor Fiorello LaGuardia also attended.

Phyllis Gelow, a Basketball Player from the White Goods Workers Union, a subset of the International Ladies Garment Union. By Forward Archives

“This will be the biggest sports Olympiad, and in many aspects, will surpass the Olympics currently being held in Nazi Germany,” the article claimed.

After the Nazis took power, the IOC faced pressure to move the games from Berlin. In 1935, the American Olympic Association even suggested moving them to Rome. When the IOC chose to keep the games in Germany, however, Jewish and anti-fascist groups around the world began to push for a boycott in a rebuke to the Olympic Committee’s perceived normalization of the Nazi regime.

And they fought, as well, for other opportunities for the world’s athletes to engage in Olympic-level competition. The New York games were part of series of similar events held by left wing groups around the world, the flagship of which was supposed to be the People’s Olympiad, which was set to be held in Barcelona until it was prevented by the onset of the Spanish Civil War.

In New York, the festivities were attended by the city and state’s leading politicians. Among the 400 participants were past Olympic champions, like Ed Gordon, who took the gold medal in the long jump at the 1932 Olympic Games in Los Angeles. One athlete who gained particular fame and glory on Randall’s Island was the so-called “jumping janitor,” George Vargott. At the event, Vargott set what was then the world record for the pole vault, flinging himself 14 feet and 4.5 inches — an inch and half better than the highest height achieved in Berlin that year. 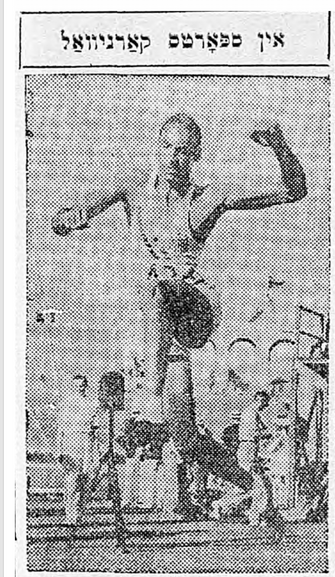 While today the Carnival has largely been forgotten, at the time, the success of the New York event made for a powerful symbol. In giving it much more prominent coverage than the Olympics, the Forward was making an ideological stand — although it also didn’t hurt that the JLC’s founder and leader, Baruch Charney Vladeck, was at the time the Forward’s manager.

“The World Labor Athletic Carnival was a unique publicity vehicle to support those in New York and around the world who actively opposed holding the Olympics in Berlin and thereby giving prestige and legitimacy to Hitler and his regime,” the JLC wrote on the 80th anniversary of the event.