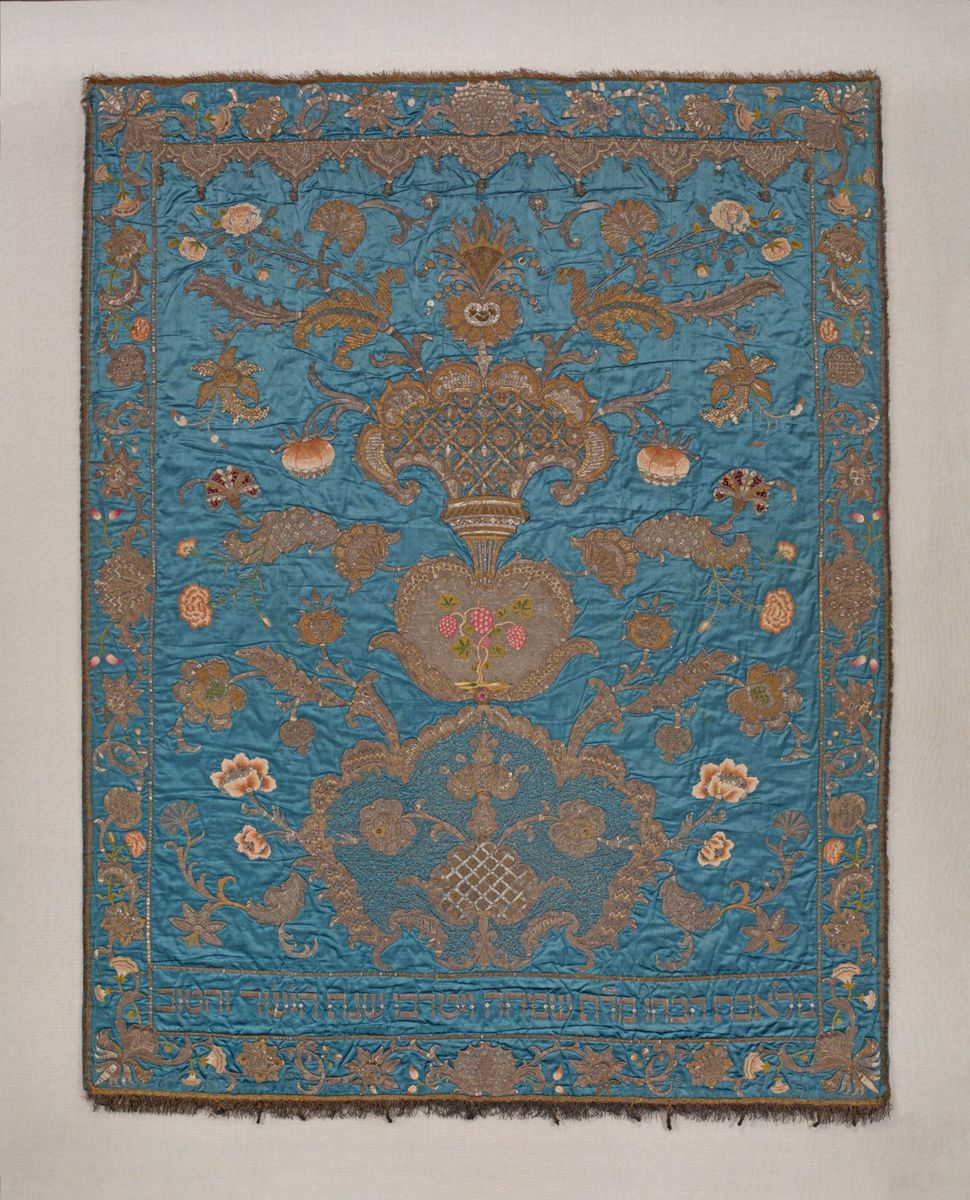 In the basement of the Saint Louis Art museum a luminous tapestry — the centerpiece of the exhibit “Signed in Silk: Introducing a Sacred Jewish Textile” — dazzles as if lit from within. The acquisition of this 18th century Italian ark curtain, or parokhet, created by the Jewish teenage girl Simhah Viterbo in Ancona, Italy, inspired this exhibit, which displays textiles from across the Ottoman Empire in the 17th and 18th centuries to trace potential influences on Viterbo’s creation.

As the exhibit explains, Jews across Europe fled persecution by seeking haven in Italy; Jews living in Ancona and other papal states suffered severe discrimination. Pope Paul IV issued a decree that forced Jews into low-paying trades such as secondhand textile dealing and isolated them in ghettos. While oppressive, this forced segregation of Jews in ghettos coincided with a “flowering of ceremonial art.” The Papal mandate gave Jews access to used luxury textiles, which allowed several 18th-century Torah ark curtains, like the featured one, to be made from jardiniere velvets. Many Jewish women specialized in mending, and their experience likely led to their expertise in embroidery.

Ancona, a port city on Italy’s Adriatic coast, benefitted from trading ties established by Jewish communities in the Balkans, North African and the Middle East, exposing Jews to goods and textiles from across the Ottoman Empire. The exhibit features a range of mid-17th and 18th century religious textiles used in Jewish, Christian and Muslim prayer, as well as secular textiles. On display is an embroidered mid-18th century Indian palampore, or bed cover, with thousands of tiny chain stitches of branches and azure blue and crimson flowers with a large red “Tree of Life” in the center. This motif of the Tree of Life drew on European, Indian, Chinese and Persian sources and Indian textiles, which were seen in the inventories of Ancona’s Jewish shoppers by the mid-18th century.

Also on display is a 17th century table cover embroidered with motifs of little birds, butterflies and snails in a rectangular band bordering the cloth. The exhibit text compares that band design to one made on a linen and silk fabric by a Jewish woman in Ancona, Livia Seppilli, in 1672 to wrap Torah scrolls. Unfortunately, only a photo of this textile is shown here, not the actual cloth, which hangs in the Museum of Italian Jewish Art in Jerusalem.

Besides Viterbo’s curtain hang two secular textiles from the Ottoman period, a sash with a design of cypress trees and carnations from the late 18th century, and a scarf with design of floral motifs made in the late 18th to early 19th century, both embellished with delicate peach and pale blue blossoms with sparking metal threads. Similar floral arrangements and the same pastel palette, as well as metallic thread, were used in embroidered Torah curtains made in the Ottoman Empire at that time.

Of course, the highlight of the exhibit is its inspiration, Viterbo’s lavishly embroidered Torah ark curtain. In this shadowy basement, the sparkles on the metallic thread and sequins stand out in the background sea of azure blue, the subtle shimmering more dramatic than if viewed in bright light. It’s likely the azure has faded through the centuries, just as the displayed 17th century Christian vestment has faded from its deeper purple, so it was probably even more glorious in its day. The brilliant background of azure blue is the same color as the larger blossoms on the nearby 18th century Indian palampore. The ark curtain’s enclosed floral border with its entwined tendrils resembles the arabesque patterns from adjacent secular Ottoman textiles while the delicate apricot-colored blossoms of roses, carnations and bellflowers with glimmering metal threads reflect the 18th century European taste for botanic naturalism. Interestingly, Viterbo chose to embroider three red berries in the center, the stems intertwined, perhaps an allusion to the Indian Tree of Life motif, also red in the nearby pampalore.

Across the bottom of the curtain, Viterbo boldly embroidered her name in Hebrew: “made by the young woman Simhah Viterbo in the year of the straight and the good” — 5515 in the Hebrew calendar, or 1755 in the Gregorian. These stitched words strike a touching note of optimism and bravado. This is the only textile in the exhibit where the artist embroidered her name. Likely, Simhah wanted to be appreciated, to be remembered. I yearned to find out more about her identity, to flesh out what her life must have been like as a Jewish teenager in Ancona.

Simhah Viterbo’s son, Rabbi Jehiel Hayim Viterbo, is quoted in the exhibit as saying, “I was a child, tender and my mother’s only… And together we used to have great fun every day…She was taken from me when I was almost fourteen…A woman of valor, of many talents…the work of her hands was magnificent, words cannot describe…works of art, embroidery, in silver and in gold, more valuable than pearls, for the grandeur of the sanctuary and the court.”

The exhibit notes suggest that Simhah Viterbo was following “a long tradition of Italian Jewish women who made splendid textiles for their synagogues, the heart of Jewish life in Italy.” Yet her son’s words make her sound extraordinary. Who was this Rabbi Jehiel Hayim Viterbo and what else did he write? I craved to learn more about his devoted relationship with his mother and to see more of his mother’s work. What was Simhah Viterbo’s daily life in the Jewish ghetto like? I wished the exhibit had shared more about her and her family background.

Still, even without knowing more than what we learn in this provocative exhibit, a deep-dive into the world of 18th century devotional textiles, Viterbo’s Torah curtain from Ancona hangs in the Saint Louis Art Museum like a dazzling talisman, a testament not only to her artistic skill, but to how creating art is a means to rise above constrained circumstances, to create something beautiful that will last beyond one’s individual life.