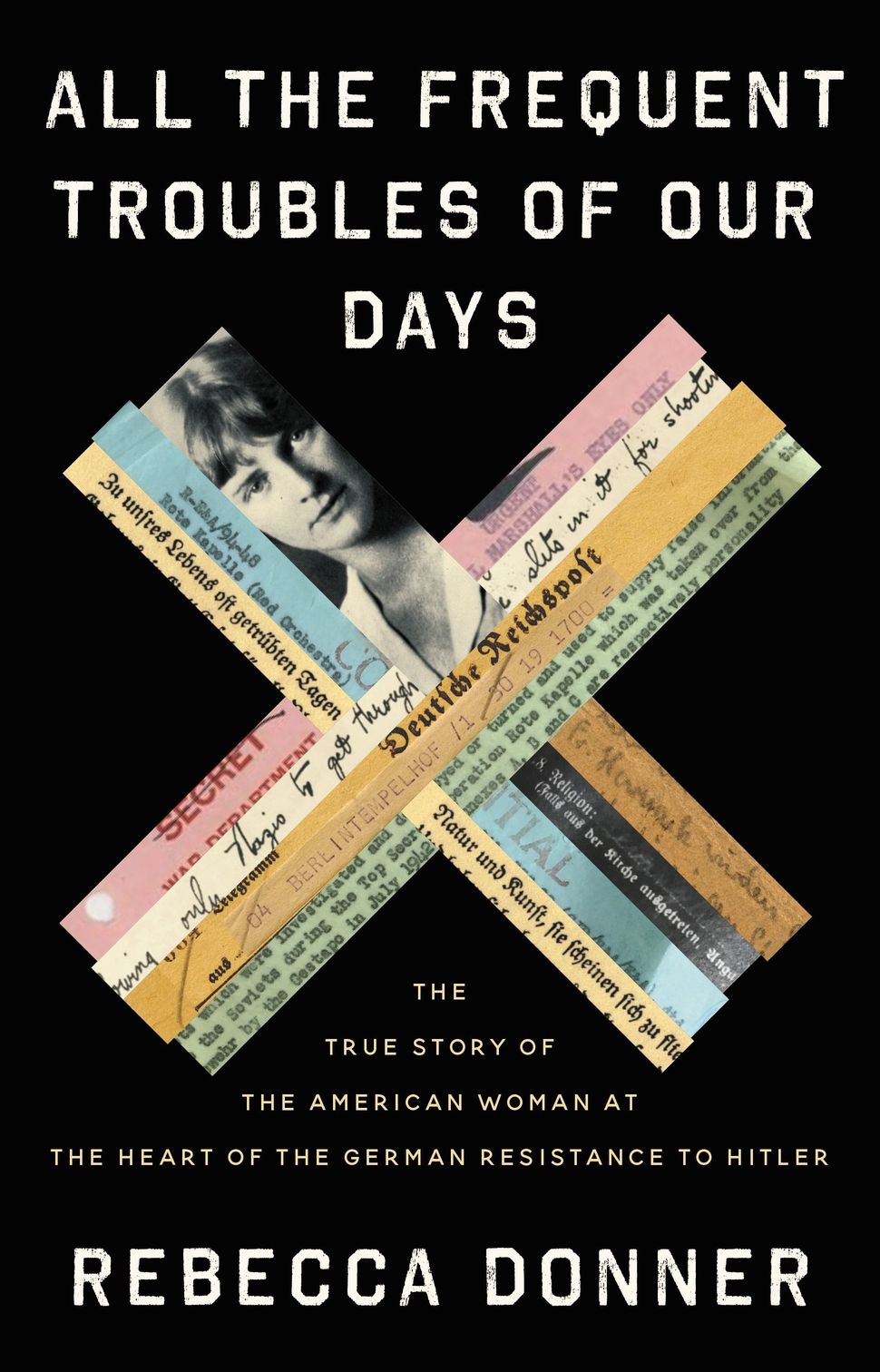 All the Frequent Troubles of Our Days: The title of Rebecca Donner’s book is taken from a translation of a poem by Goethe. Courtesy of Little Brown

All the Frequent Troubles of Our Days: The True Story of the American Woman at the Heart of the German Resistance to Hitler

Since childhood, Rebecca Donner had known that she was heir to an important – and little-known — story of World War II resistance. Her Milwaukee-born great-great-aunt, Mildred Harnack, in concert with her German husband, Arvid Harnack, led a circle of anti-Nazi resisters in Berlin. From the early 1930s through the war years, their activities escalated from discussions to leafletting, facilitating the escape of Jews, plotting sabotage and, eventually, espionage. In the end, the decryption of a Soviet message about the group – whom the Nazis dubbed the “Red Orchestra” — led to Mildred Harnack’s arrest, torture and 1943 execution. Donner, a two-time novelist and a 2018-19 fellow at the Leon Levy Center for Biography at the City University of New York, tells the story in her new nonfiction narrative, “All the Frequent Troubles of Our Days.” The title is lifted from Harnack’s prison translation of a Goethe poem. 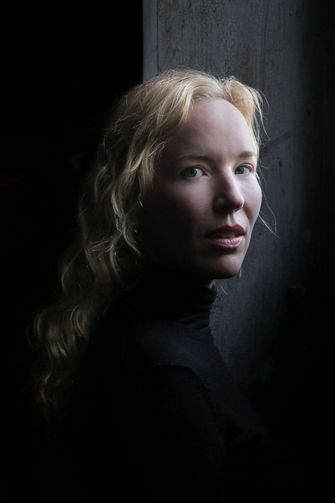 Author of Fiction and Nonfiction: Rebecca Donner’s latest book is “All the Frequent Troubles of Our Days: The True Story of the American Woman at the Heart of the German Resistance to Hitler.” By Beowulf Sheehan

When did you first learn about Mildred Harnack?

Visiting my great-grandmother in Chevy Chase, Maryland, I went into her kitchen, and I saw a growth chart on the wall. She took my height measurement, and then I looked at the other marks on the wall, and I saw a very faint one. I said, “Who’s that?” And my great-grandmother said, “That’s Mildred.” The way that she said her name, there was an emotion behind it that registered for me, even as a nine-year-old.

And then, when you were a teenager, your grandmother Jane Donner gave you copies of Mildred’s letters?

And her books, with her name written in cursive. Jane was thinking about Mildred a lot and wanting to make sure that the memory did not get lost. I learned that Mildred had been decapitated on direct order of Hitler and that she had been at the center of an underground resistance group in Berlin. And that she was misunderstood.

Mildred was seen as just a wife, somebody just doing what her husband said, and also not political, just interested in literature. There was this mythology that swirled around Mildred, and it was very minimizing. And these myths gave her no credit for her intellect. She’s called an English teacher, and her husband, Arvid Harnack, is called a scholar, when, in fact, they were both graduate students [when they met at the University of Wisconsin].

Absolutely — so much so that when I went to Berkeley, in my first creative writing class, I was assigned to write a story, and Mildred Harnack was my subject. I just thought, I’m going to imagine what it was like for Mildred to be in her prison cell right before she was executed. It was exciting for me to write it, and also unsatisfying, because I wanted to know more. I didn’t have enough facts.

How did the book idea develop?

My second novel [“Burnout”] was a graphic novel about ecoterrorism. While I was thinking about the line between political conviction and extremism, it put me in mind of Mildred again. I went to Berlin in 2008, to the German Resistance Memorial Center, thinking maybe they’ll have a plaque on the wall or something. And I rode the elevator up, and the doors open, and there was this huge picture of Mildred. It turned out that there was an entire exhibition on her. It really was a very odd coincidence. And then I spoke to the director, and he remembered my grandmother [who had donated family papers to the archive], and said he had documents that I could look through. I walked away thinking, this is a huge undertaking. I just wasn’t sure whether I was prepared to do that heavy lift.

What got you back to the project?

Right about the time of the lead-up to the presidential election in 2016, I started thinking, people really need hear this story about resistance. These are stories that have not been told. So many have been lost — not just Mildred’s, but her co-conspirators’. I learned that 40 percent of her group were women.

Once you did commit to it, what were the biggest challenges?

The avalanche of documents. Also, how do you organize all these different narrative lines? Do I want to focus on one particular period? Do I want to just focus on Mildred?

In the end, Mildred’s child courier, Donald Heath Jr., becomes a big part of the story.

When I was at a residency at Yaddo, I discovered that he was still alive. He was 89 years old. I first interviewed him on the phone, and then I flew out to see him, and then the story blew wide open for me. It was incredibly moving to see Don. He had such an acute memory of that time.

What were Mildred Harnack’s motivations?

She was appalled by what was happening in Germany. She moved there in 1929, and she started seeing swastikas popping up everywhere. She had this great conviction that she wanted to oppose something that she thought was extremely dangerous.

What were her political beliefs?

She was extremely sympathetic to the ideas of the Communist Party. She was never a member of the party, but she definitely had the works of Lenin on her bookshelf. She felt that capitalism was not a system that was sustainable.

How did the resistance develop?

It began in a very informal way, getting together discussing what should be done. There were also these leaflet campaigns that sound very milquetoast but were actually extremely dangerous. In 1935, [the Harnack group] made the decision to change their strategy and to try to penetrate the Nazi regime from within and to try to extend their contacts beyond Germany’s borders.

They also were helping Jews?

Definitely. But we don’t have extensive records quantifying the number of Jews who were helped. We know from memoirs that this occurred.

This was not simply a story of heroism, though, but of failure as well.

Everybody was bumbling. You have these radio transmitters that were not operational, and radio operators who were hastily trained. It was harrowing.

Despite the Harnacks’ best efforts, both the United States and Britain were skeptical of the German resistance.

Nobody really knew whom to trust. So many people either supported the regime or just didn’t offer up any opposition. So, anybody who did step forward and seemed willing to take a risk? Yes, that was doubted.

But the biggest mistake seems to have been that Soviet intelligence used real names in an encrypted message.

It took [the Nazis] about a year to break the code. Once the code was broken, they kept the group under surveillance for a bit. And then they just swooped in.

Your book is also very much a love story.

Arvid’s last letter [to his wife] really helps amplify that. He wrote about the dangers that they faced and how difficult it was at the end of the day. But when he would lay his head on her shoulder, or hers on his, then all would be well in the world. It’s this tremendously powerful document. And the fact that it made its way to his mother’s hands, too, is just astonishing.

Why did Mildred’s sister, Harriette, your great-grandmother, want the family to destroy her letters and photographs?

Burying the evidence and just moving on was her way of dealing with her grief. There was also the taint of Communism. And she was filled with rage that Mildred had gone to Germany in the first place.

Why did you write your narrative in the present tense?

I wanted to bring readers to the streets of Berlin and show the rise of fascism as it happened. I didn’t want them to read this as a history. Whenever you use the past tense, there is a sense of distancing. I felt a great urgency to try to show people how quickly a democracy can fall in the way that it did in Germany.

I would like to embolden people. When you read stories of these courageous women and men who risk their lives to fight a fascist dictatorship, it really demonstrates how important it is to have the courage of your convictions and to fight for what you believe in.

But what actual impact did the Harnacks and their fellow resisters have?

You can’t quantify this kind of thing and say X number of people were saved – and if that number isn’t high enough, then it was a waste. If they saved one person’s life, it was worth it.