Why retire? Catching up with the most-watched Jew in television history 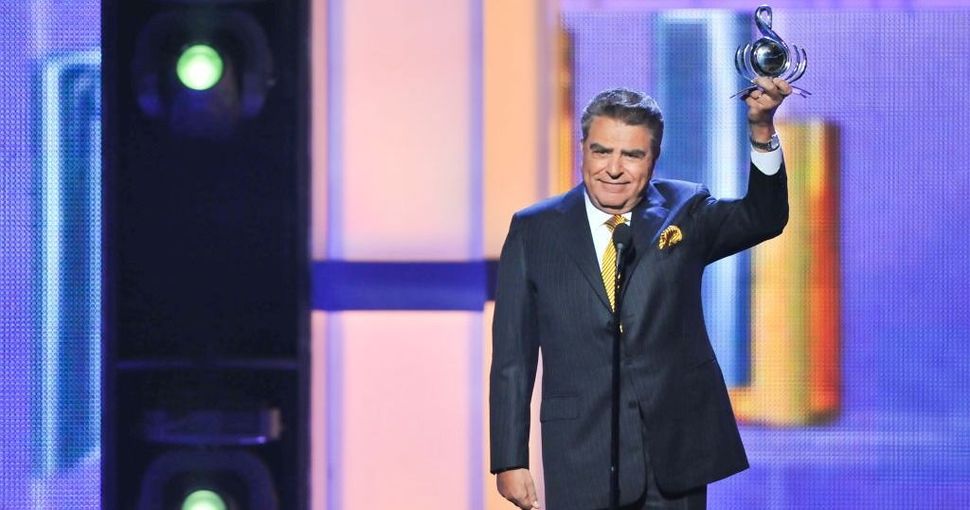 This isn’t a trick question. Who is the Jewish TV star who hosted the longest-running variety show in television history, airing for more than 50 years and watched by as many as 100 million viewers worldwide?

If you answered Don Francisco, host of Univision’s “Sabado Gigante,” which signed off in 2015 after 53 years and 42 days (a Guinness World Record), give yourself a point. And if you said Mario Kreutzberger — or better, Mario Luis Kreutzberger Blumenfeld — add extra credit.

A Chilean native and the son of German Jews who fled to that country, Kreutzberger recently penned his life story, “Con ganas de vivir. Memorias” (“A Desire to Live: A Memoir.”) His second memoir, it follows his 2002 autobiography, “Life, Camera, Action!” Both detail his journey from an early fascination with television to becoming the on-screen embodiment of international Hispanic culture.

With no plans to retire, the 80-year-old Kreutzberger hosted a limited series on CNN in February, “Don Francisco: Reflexiones 2021.” That month he spoke with media writer Court Stroud. Their conversation originally appeared in Forbes.

You’re one of the Spanish language’s most famous people, so it’s ironic that Spanish wasn’t your first language.

Don Francisco: Yes, German was my first language. I lived with my grandmother and she spoke only German. When I went to school, I spoke Spanish.

I’m the son of a Holocaust survivor. My father was in a concentration camp and my mother left the country after Kristallnacht. My father, he never wanted to talk about the concentration camp or that he suffered. One of his relatives told me that he was in Bergen-Belsen.

Four or five months ago, during the time that I was writing my new book, “A Desire to Live” (“Con Ganas de Vivir”), I learned that my father was the prisoner 27770 from Buchenwald.

Your parents escaped from anti-Semitism and the Holocaust. That must have had a huge effect on you.

Oh, yes, it has even today. Because I just did a small piece about Buchenwald Camp, what it means for me knowing — when I’m 80 years old — that my father was the prisoner 27770.

At the end, I said, “Mein Vater hat es mir immer gesagt” — that means “my father always told me” — yes, forgive but do not forget.

How did you start your career in television?

My father sent me in 1959 to New York. I went to the technical university to become a men’s clothing designer. I was there for two years. But when I went into my very humble hotel room, I saw a radio very similar to the radio that I had in my home in Santiago but instead of having a piece of cloth in the front, this “radio” had a glass. When I put it on, you were able to see and to listen at the same time. I said, what I’m studying is yesterday. This is the future: television.

I fell in love at first sight when I saw television, watching Jack Paar, Ed Sullivan, Johnny Carson. I was inspired by these people.

How did you get your start performing on TV?

When I went back to Chile, that was the beginning of Chilean television. I went to the station to say to the people there, “You know, I saw more television than all of you. I was watching for two years.” “But who are you? You are nobody.” Oh, my perseverance. I was trying and trying for one year. They gave me an opportunity on Sundays for one hour. I was just married. At the week number eight, fuera. They fired me.

You were let go?

I was so depressed. At the week number nine, they took me back. The people kept calling for me. “Where’s the fat guy?” I was always heavy, even more than now.

Were you already going by the name Don Francisco?

I started acting because my mother was an opera singer. She was so depressed. She never could perform because of the Holocaust. She always thought that maybe I could be a singer and she promoted me always to study singing and to learn different instruments. But I was not able to do that.

I started acting in a Jewish club and made the impression of a Jewish guy that couldn’t speak Spanish well. This guy had a funny name, “Don Francisco Ziziguen González.”

I went one day to a contest to tell jokes. I was very good telling jokes. But before I went on, the host asked me, “What’s your name?” I said, “Mario Kreutzberger.” “What? That’s impossible.” I said, “Why don’t you call me Don Francisco?” I won and said [to myself], “This is a name that is for good luck.” About eight weeks after, I took out my name, and forever I’m Don Francisco.

Of all the interviews you’ve conducted, which surprised you the most?

Many. I interviewed all the Presidents of the United States: Bush, the father; Clinton; Bush, the son; Obama, and also the candidates running against them. Obama was a very important interview for me, and also Bush, the son.

What happened with George W. Bush?

With Bush, I have an anecdote. We drove to the place where he lives in Texas, before he was president. Very far. I arrived there and did the interview. At the end, I said, “Mr. Bush, maybe you’re going to be the president. You never will remember me because I’m from a humble television station in Spanish.” He said to me, “You’re wrong. I’m going to give you the first interview.”

He won the election and was the president. He did a big party for the Hispanics. I was not invited. [Laughs] I was forgotten completely. After about eight days, they called me from the White House. The guy who was in charge of Hispanic relations told me, “The President told you he will give you the first interview.” He had only done press conferences. I flew to Washington, and he gave me the first interview.

You just wrote your fourth book. You’re starting a new series with CNN en Español. You have so much energy that I’m hesitant to ask, but has retirement ever crossed your mind?

No. This is like killing your soul. Why do you have to retire?

There is a magic word: perseverance. Perseverance is the word that keeps me, at 80 years, trying to start something new. I was the captain of a 747 and now I’m building a Piper with one engine.

This interview has been edited for length and clarity. Court Stroud has worked at Univision, Telemundo, TV Azteca and CBS Interactive, among others broadcast outlets. He runs The Cledor Group, a media consulting and training company and holds undergraduate degrees from the University of Texas-Austin, an MBA from Harvard University and teaches at Columbia. He may be reached at courtstroud.com

Why retire? Catching up with the most-watched Jew in television history