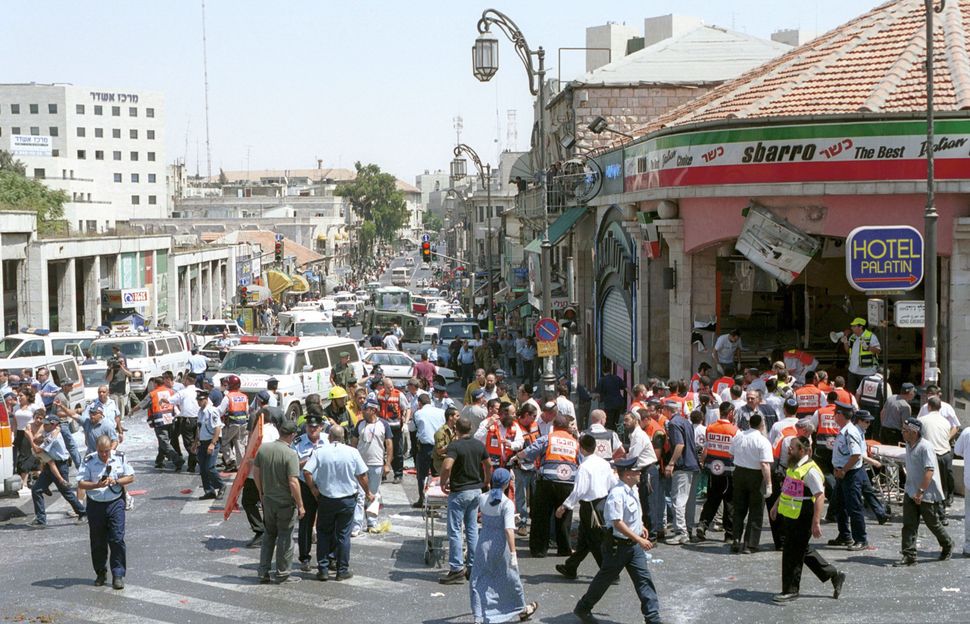 Scene of Carnage: In August, 2001, a Sbarro pizzeria in central Jerusalem was bombed, killing 15 and injuring 130. By Getty Images

Twenty years ago this week, I watched a bride have her wedding pictures taken along the water in Jaffa. As the photographer clicked and clicked, the radio blared from a nearby car with the doors open. I will always remember that white car, the two front doors open, the news of the Sbarro bombing, the death toll going up and up and up.

The photographer I worked with then, on a travel column, had a good eye. He was photographing the bride getting her pictures taken, concentrating hard, when the news reached him — or maybe it was me, waving my hands, saying we had to get out of there.

It was not the best place to be at that moment. The empty beach.

The photographer and I had seen so much. We had paid a shiva call to the family that lost two teenage daughters in the Dolphinarium bombing that killed 21 Israelis. He was a paratrooper, what most people would call tough, but he cried at that shiva. His tears mucked up the lens, but I calmly told him he had to clean it and take pictures in time for our deadline. He did, he managed to click and click and take a photo of the mother and her son, a boy who had just lost his two sisters to a bomb. The picture appeared with the very first op-ed I ever wrote.

We both saw far too much wreckage, of lives, limbs, homes, dreams.

I write this now because I am struck by how little the events of these weeks 20 years ago are being discussed in the American Jewish community, and how there is such widespread misunderstanding, or perhaps ignorance, of how the Second Intifada changed Israel. Sometimes a tweet written in English breaks through the barriers of language and distance and time, like this one, part of a thread by Shany Mor, associate fellow at the Arendt Center at Bard College.

That summer — the Dolphinarium bombing on June 1 in Tel Aviv, and the long lines of Russian immigrants in heels and makeup in the days afterward, waiting to pay a shiva call to the other Russian immigrants in crumbling apartments who had lost children. More attacks, coming closer, all the time, and then, Sbarro in central Jerusalem on Aug. 9, killing 15, including 7 children and injuring 130.

The mastermind of the bombing — who chose the spot and led the bomber there — was a young woman.

And every day, with every newsflash of every bombing, the sinking feeling that peace—and the clear, official promise of a Palestinian state, the result of years of work—had been rejected. The answer was not a counteroffer, a negotiation on this and that terrain. Instead, the answer was these bombings. One after another. The open car door, the radio blaring. Click. Click. Click.

I spent years trying to write a poem about that day. I never finished. What I remember is that it was in tercets, that the drafts in longhand on yellow legal pads are somewhere in a drawer in the house I grew up in, though I am no longer sure which drawer. Most of us are no longer sure how to understand so much of what has happened over the past 20 years, but a few things are certain.

It’s hard to see in today’s bustling Israel, hard to remember with all that has happened since, but it’s inside people, in their minds, in their eyes. To me, Jerusalem will always be a city of the cafés I wrote in but somehow did not die in. The cafés are gone now, though sometimes new cafés have risen in their place, but in my mind, I still see the wreckage. 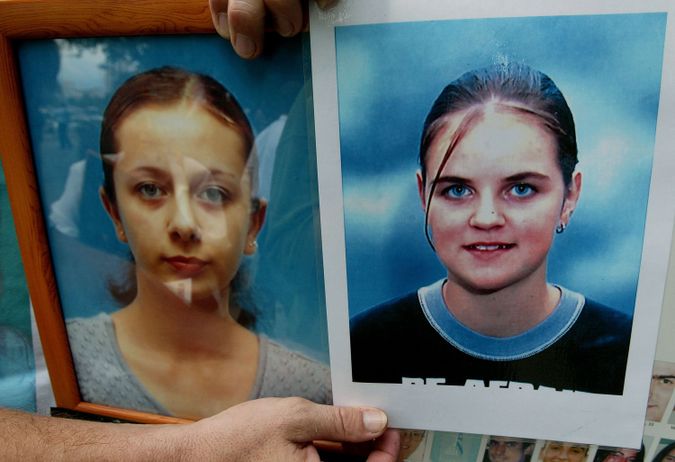 Victims of Terror: An Israeli man holds portraits of teenagers Mariana Medvedenko and Anna Kazachkov, who were both killed in the Palestinian suicide bombing at the Dolphinarium discotheque June 1, 2001. By Getty Images

There were 138 suicide attacks and 1,038 Israelis killed from Sept. 28, 2000 — the day Ariel Sharon visited the Temple Mount — through Feb. 8, 2005, according to data from the Shin Bet security service. Those Israeli dead were primarily civilians — kids having a pizza at Sbarro, a 16-year-old girl at a nightclub.

Compare that to the Six-Day War, which killed 777 soldiers and wounded 2,586. In the Six-Day War, Israel lost twice as many men in proportion to total population in six days as the U.S. lost in eight years in Vietnam.

But in terms of the number of dead, the Second Intifada was worse. And that doesn’t count the thousands of people injured — some estimate that over 8000 Israelis were injured in terror attacks in five years. I saw some of those injured, post-injury. A more accurate word for those I saw might be “maimed.”

The Second Intifada also took a terrible toll on Palestinians — in lives and in political reality. Israel’s Ministry of Foreign Affairs puts the death toll at “over 2000” noting that “the disproportionate number of Palestinian casualties was primarily a result of the number of Palestinians involved in violence. The unfortunate deaths of noncombatants was largely due to the practice of Palestinian terrorists using civilians as shields.”

And it’s not ancient history. Some believe the Second Intifada never actually ended.

“The Second Intifada is a historical event with an agreed start date (on Sept. 28, 2000, Ariel Sharon visited Temple Mount, and the following day violent upheaval began to spread across the “territories”), but with no defined end date,” writes Michael Milshtein, head of the Palestinian Studies Forum at the Dayan Center at Tel Aviv University.

“Some Palestinians argue that the Second Intifada ended with the death of Arafat in November 2004 and the rise to power of Abu Mazen, who has since led a distinctly different strategic vision; others maintain that the general elections in the Palestinian Authority in 2006, won by Hamas, and the latter’s forceful takeover of the Gaza Strip in June 2007, had put an end to the Second Intifada; and others still believe that the conflict never ended, only “morphed” from suicide bombings and shootings to military campaigns and rounds of escalation in the Gaza Strip alongside lone wolf terror attacks in the West Bank,” Milshtein writes.

Today, it seems many younger American Jews have no memory of those weeks and months — part of five long years of terror — that changed Israel and permanently hobbled the Israeli left because they destroyed the left’s fundamental argument.

Recently, when I was giving a talk to an educated young Jewish crowd, reading a poem that mentioned the word “Dolphinarium,” someone said they had never heard of the Dolphinarium bombing. I bet the same is true for the Sbarro bombing, but I did not ask. It might be time for those who do remember to talk with those who are too young to remember.

I sometimes think about that bride and wonder where she is, how she is doing. I sometimes flash back to those young men in the car, watching. I wonder what happened to them, what they believe now, where they were in the harrowing May attacks in Israel, some in Jaffa itself. I sometimes wonder why the Second Intifada and the peace offer it followed — the fact that yes, there was a clear process, then, that yes, there had been years of progress toward a Palestinian state that were reversed by terror — are so much less of a presence to American Jews than Israelis. In Israel, it’s an understood, painful silence, a knowledge commonly shared.

I can still hear it. Twenty years after a bomb exploded in a pizza place in what was probably the busiest spot to eat in all of Jerusalem, 20 years after the young woman who masterminded it escaped unharmed. She now lives in Jordan and on the FBI’s Most Wanted List. But if you were on the beach, being watched, if you spent your nights with the mourners of the bombed-to-bits, you remember. It’s always in the back of your mind, a film reel you can never turn completely to black.

Aviya Kushner is The Forward’s language columnist and the author of Wolf Lamb Bomb (Orison Books) and The Grammar of God (Spiegel & Grau). Follow her on Twitter @AviyaKushner